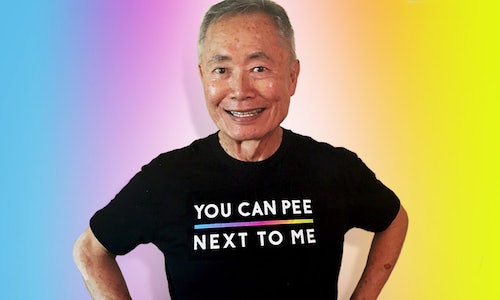 George Takei fights HB2 with "You Can Pee Next To Me"

In March 2016, North Carolina's governor signed the controversial House Bill 2 (HB2). Among other discriminatory measures, the so-called "Bathroom Bill" requires transgender people to use the restroom corresponding to the sex on their birth certificate, rather than the gender with which they identify.

In response, actor and activist George Takei decided to channel his ire into action, calling fundraising platform Omaze to create a campaign to raise funds and awareness in support of equality, and to repeal this unjust law.

George and The Social Edge (TSE) knew they wanted to work with a nonprofit making a difference on the ground in North Carolina. Omaze introduced them to Equality North Carolina, an organization that has been at the forefront of fighting for LGBTQ rights in the state since 1979; and specifically had been fighting for repeal of HB2 since it became law in March. George was excited to make Equality NC the beneficiary of his campaign to support equality and to fight HB2.

George, TSE, and Omaze brainstormed to create a campaign that would inspire both the LGBTQ community and allies. From this, a showstopping t-shirt campaign was born. Not only would sales benefit Equality NC, but as more supporters purchased and donned the shirt, its message would spread to maximize awareness around this important issue.

George and TSE wanted the shirt to be bold. Understanding the unique sense of humor for which "Uncle George" is known, Omaze suggested the uplifting tagline, "You Can Pee Next To Me." Fans loved the simple and direct design, recognizing Takei's cheeky humor, while understanding its significance in the cultural wars begun in North Carolina.

To ensure Equality NC would receive the funds as quickly as possible, and to increase the sense of urgency for potential donors, Takei and Omaze limited availability of the t-shirt, running the campaign for only 4 1/2 weeks.

On May 31, George announced the campaign during a Facebook Live interview of two transgender individuals. The interview was aimed at sharing their stories, generating awareness of the issue from the perspective of those who most affected by HB2.

The campaign was timed to correspond with LGBTQ Pride month in June. Omaze embarked upon a grassroots promotion of the t-shirt at two celebrations. In Los Angeles, Omaze shared cards with links for t-shirt purchase. In San Francisco, the team leveled up, selling t-shirts to attendees. Many present already were aware of the campaign, proving the power of its social media promotion.

George and TSE led the charge on social media, posting multiple times throughout the campaign, with profile and cover photo updates. and links to donate. TSE and Omaze also recruited other influencers to participate, including the verified "God" Facebook account that shared George's posts to its 2.8M followers, and actor Ravi Patel, who wore the shirt during an appearance on HBO's "Real Time with Bill Maher." (Maher's show averages 4.3 million viewers each week.)

Actor Glenn Howerton planned to appear on the "Always Sunny in Philadelphia" LA Pride float. Omaze and Glenn catapulted campaign-centered social posts that day, landing the #1 photo spot on Reddit's front page. This photo remains a popular internet image about this important cause.

The campaign received pick-up by media outlets such as "Entertainment Weekly" and "Mic," and George conducted interviews to educate the public about the harm of HB2.

With the combined efforts of Omaze and George with The Social Edge, "You Can Pee Next To Me" t-shirt sales far exceeded expectations set for the 33 day campaign. In just over four weeks, donors purchased 6,663 t-shirts, an impressive 333% of the 2,000-shirt goal. Purchases included those online, via email, and onsite at San Francisco Pride.

Metrics in both social and traditional media were outstanding, reaching a combined total over 45 million impressions:

By mobilizing influencers across social media platforms and traditional media outlets, Omaze and The Social Edge were able to leverage the outrage around HB2's passing and the festivities of Pride month to not only continue the conversation around LGBTQ rights, but to move fans to action.

The $49.9K raised through George Takei's Omaze campaign provide crucial support for Equality North Carolina, as it tirelessly educates North Carolinians on LGBTQ news, stories and content, and mobilizes communities across the country on issues that matter most. 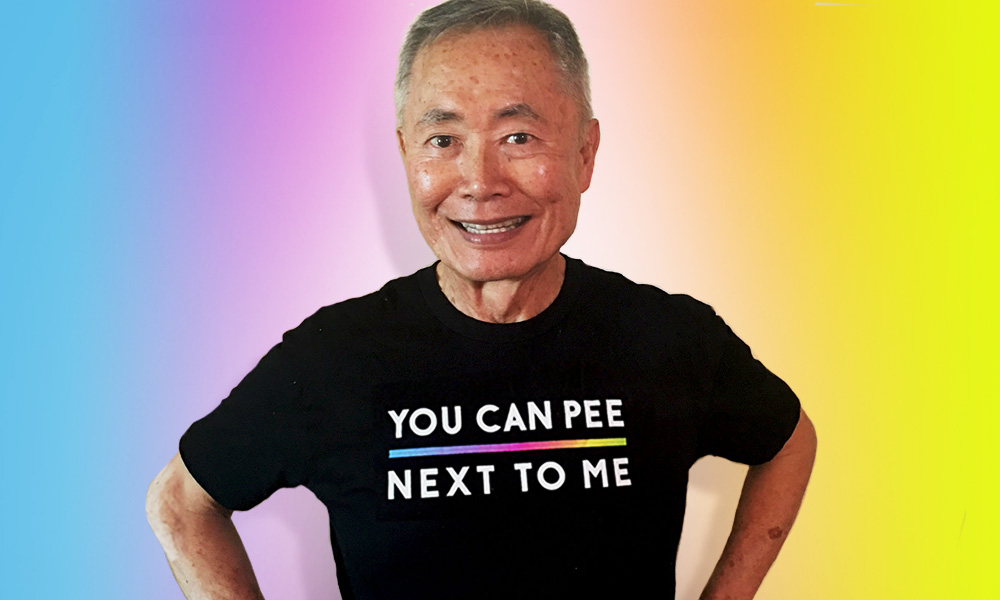 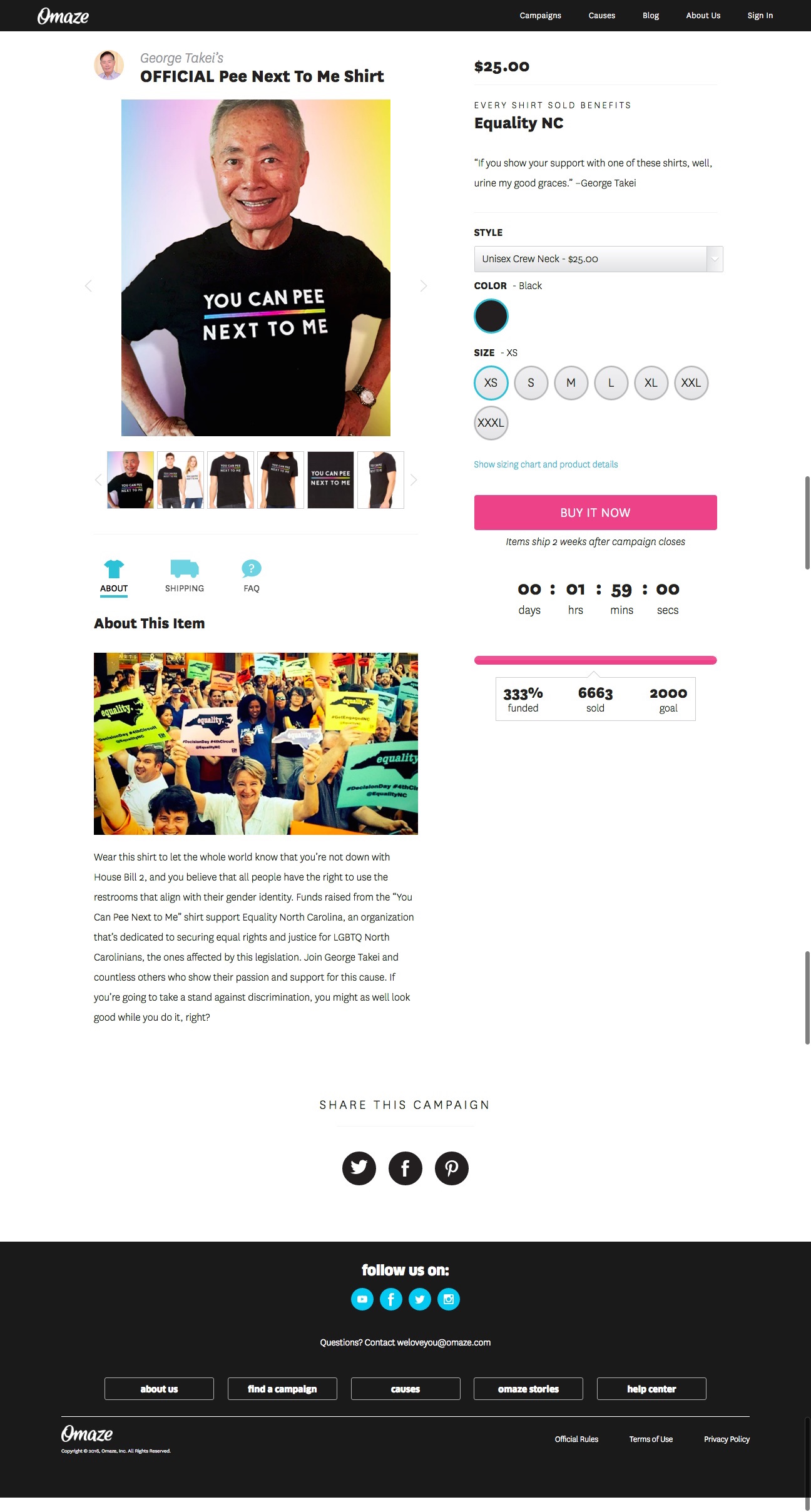 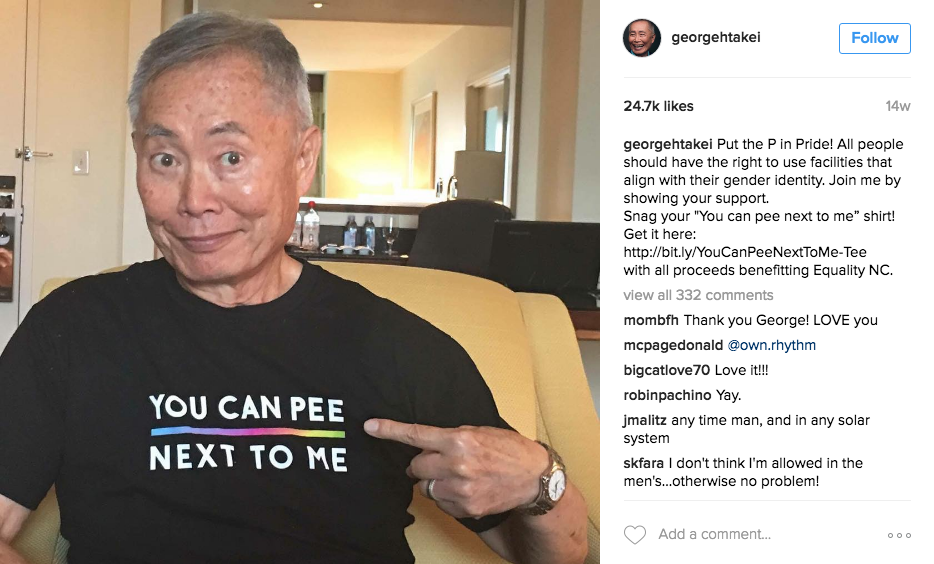 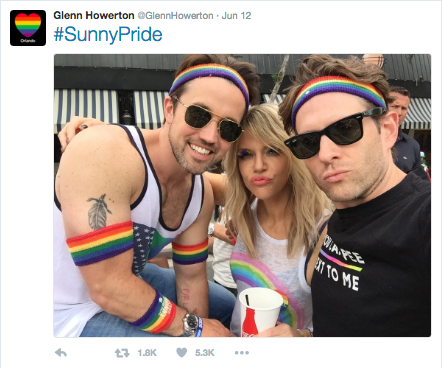 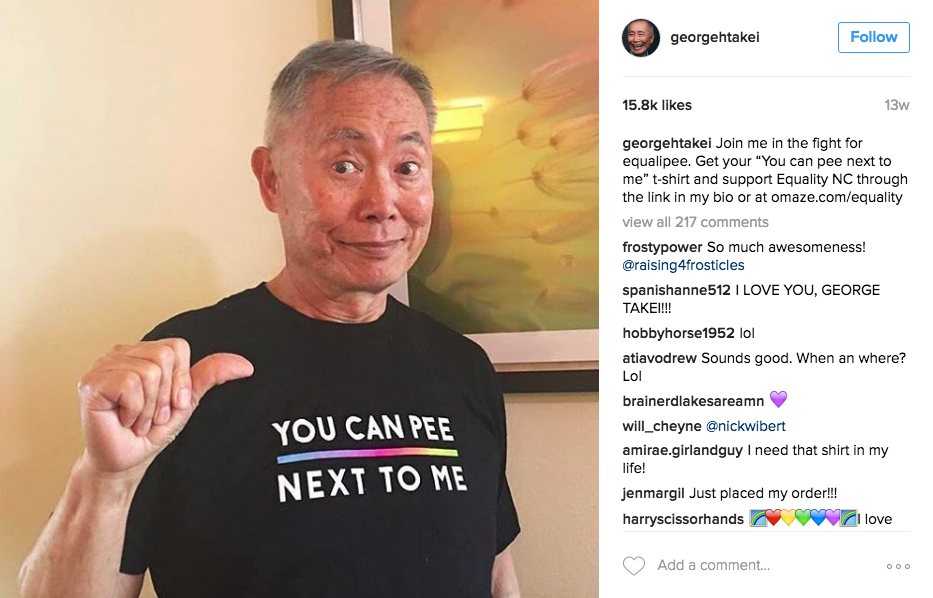 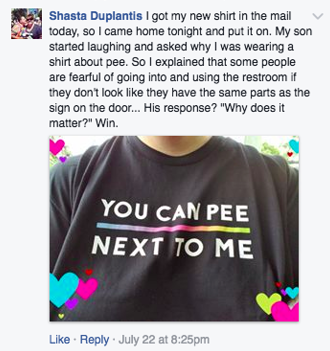