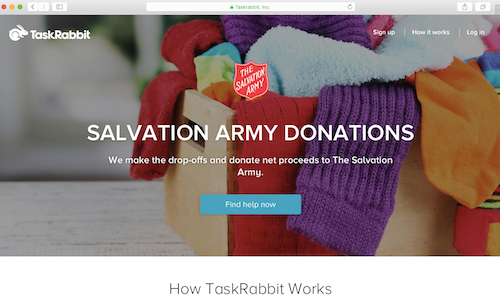 Entered in Poverty & Hunger, On a Shoestring

While the Salvation Army is most commonly known for its iconic red kettles on street sides during the holiday months, the Salvation Army's Chicagoland Area division wanted to further extend its reach to an online community of donors this holiday season. Online donations have been steadily rising over the years, and this donor pool was much younger than what the Army was seeing from individual checks or charitable donations on the street. So, the Salvation Army decided it needed to complement its traditional marketing strategy with tactics that drove increased digital donations—particularly within a younger, Millennial demographic. The objective was to engage Millennials via digital platforms to help drive donations this holiday season.

The sharing economy is nothing new. It's existed since the advent of the community: the idea of pooling resources to maximize efficiencies. But, the internet and social media have together transformed the exchange dynamics in American society—and across all corners of the globe. While technology has accelerated and amplified the sharing economy, it's also taken away the peer-to-peer piece that once gave it life: the community. We wanted to bring the human piece back to the sharing economy. And in doing so, we wanted to drive awareness amongst a younger community and encourage donations this holiday season.

Consumers have become so accustomed to frictionless interaction within online and mobile platforms, so we needed to find a way to convert the Salvation Army's messaging into donations in the most seamless way possible. The transfer of clothing, goods and even paper money has become a nuisance, keeping younger people out of brick and mortar locations in favor of everything and anything digital. We needed to figure out how the Salvation Army could overcome this barrier within the younger demographic—and we needed to simultaneously make the donation process as easy and as frictionless as possible.

We decided to create "The Caring Economy"—leveraging the pervasiveness of the sharing economy with this Millennial demographic, and using these digital infrastructures to easily facilitate donations. By leveraging an existing sharing economy platform in a contextual and authentic way, the Salvation Army could drive awareness and ultimately, provide resources for those in need.

The Salvation Army partnered with TaskRabbit, an online and mobile marketplace that allows users to outsource small jobs and tasks to others in their communities ("rabbit"). TaskRabbit users could request a local community "rabbit" to retrieve clothing and goods from any location and bring it to the nearest Salvation Army. TaskRabbit donated all net fees otherwise yielded from the completion of these services to the Salvation Army.

We complemented the launch with social outreach. Knowing that 2/3 of people in their 20s and 30s interact with non-profits on Facebook, we used Facebook to promote the partnership and drive people to complete Salvation Army task templates.

All profits from the sale of donated goods were kept in full by the Salvation Army.

It generated over 100 donations to Salvation Army, in addition to the money yielded from the TaskRabbit enterprise directly. All money raised, along with donated clothing and goods received by The Salvation Army fund its local Adult Rehabilitation Centers, which help people struggling with alcohol or substance abuse.

This partnership was negotiated for zero cost on behalf of the Salvation Army, so every cent raised was a cent truly earned.

"For the past 130 years, [we've] been one of the most important providers of social services in Chicagoland to people in need, all thanks to the generosity of our fellow Chicagoans," said Lt. Colonel Charles Smith, Divisional Commander. "This partnership makes it easier than ever for people who are using new platforms—such as TaskRabbit—to give." 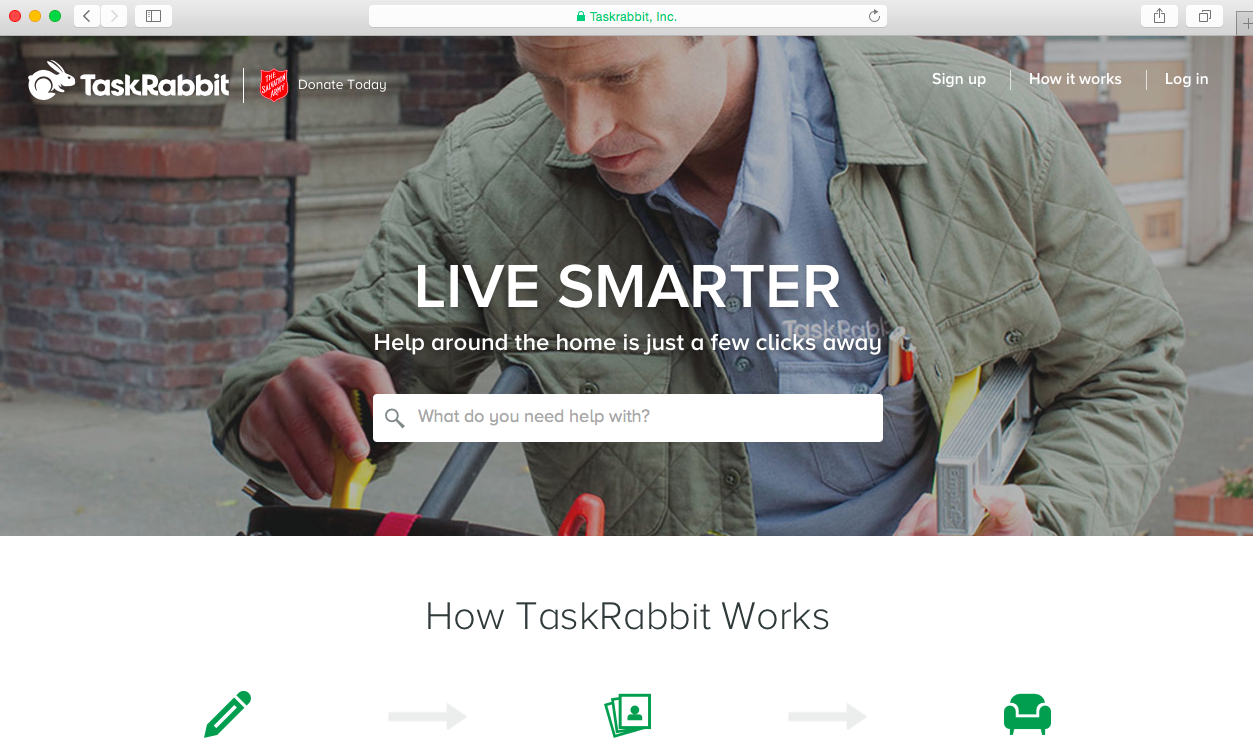 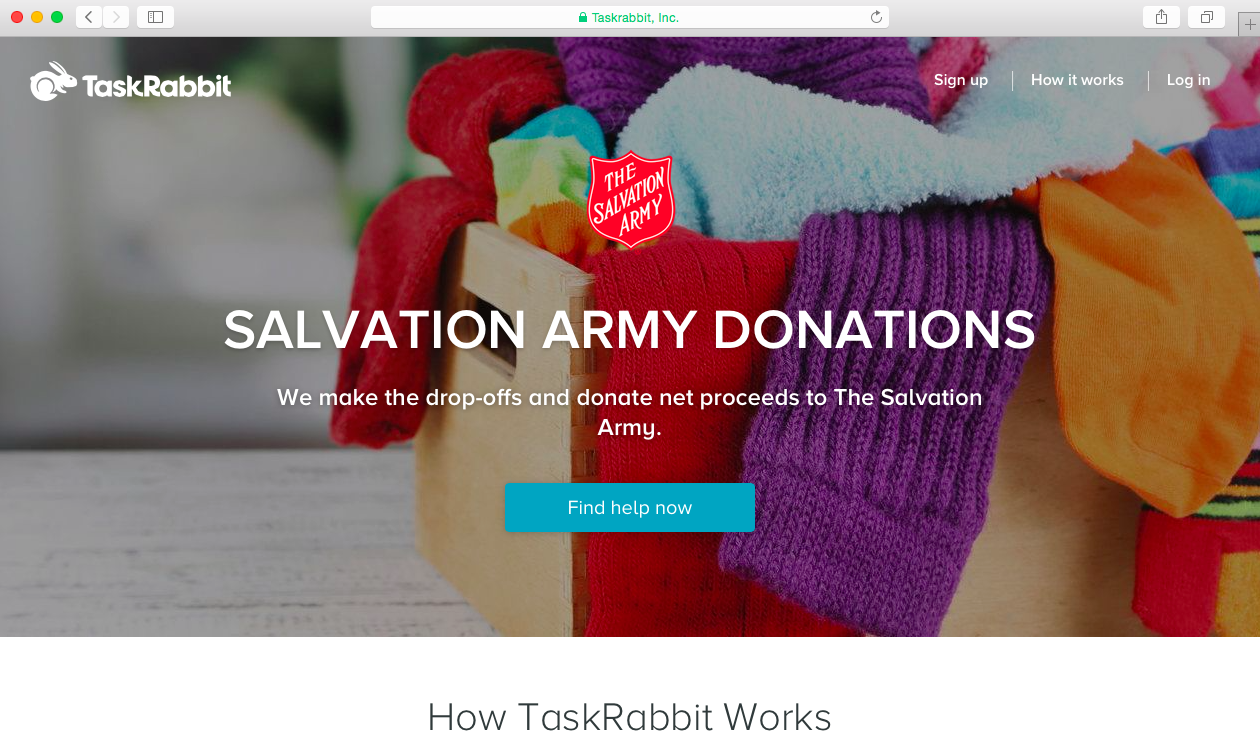 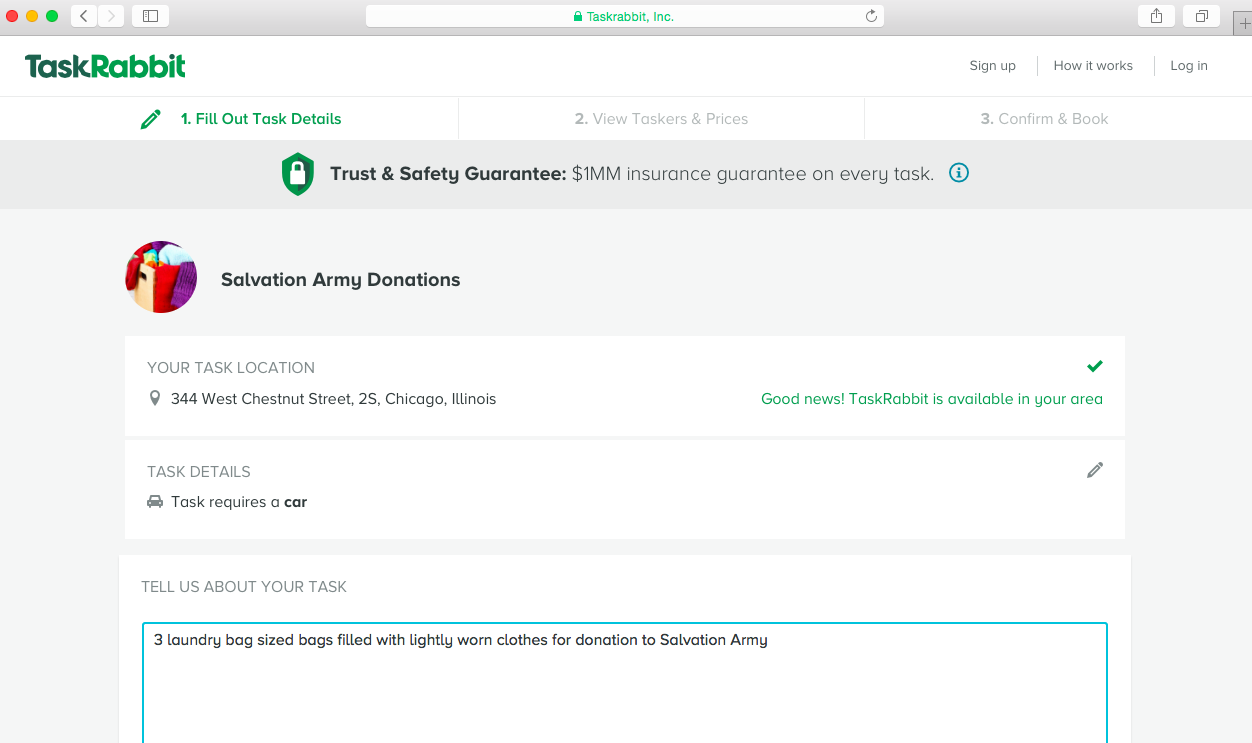