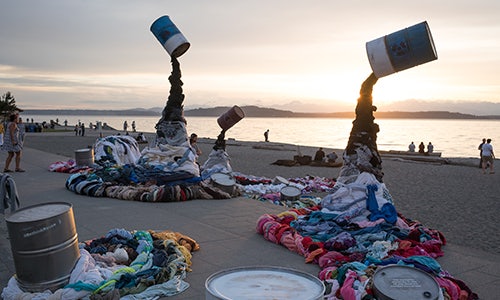 As fashion continues to grow in popularity — we now buy four times more garments than we did 30 years ago — the clothing industry has managed to become one of the biggest polluters in the world. In fact, it can take over 700 gallons of water to make one cotton T-shirt, and North Americans throw away over 26 billion pounds of clothing each year.

Thankfully, there's an unexpected hero working to buck this trend from inside the industry. Savers — the retailer best known for thrift shopping — is a company devoted to producing meaningful change through the power of reuse.

The Savers campaign Rethink Reuse was created to shed light on the environmental impact of the clothing industry and clue people in to the small steps they can take — through shopping smart and donating clothing — to offset their clothing footprint.

Fashion just keeps getting faster — and exponentially more wasteful. We had to shake up an entire industry to attract people's attention. While Savers typically speaks to a core group of thrift shoppers and its nonprofit partners' donors, we knew we had to enlist a group of like-minded, socially engaged people to ignite the change we needed.

Through primary and secondary research, we found our core insight: that while members of this group love both fashion and the environment, they didn't put the two together to weigh the impact their personal clothing decisions have on the world. But once we delivered the startling truth (for example, that 95 percent of the clothes clogging landfills could be reused), they immediately recognized the problem.

Armed with this insight, we brought the research to life in the most dramatic way possible: creating oversized installations that portrayed real clothing as giant waste spills. We created three massive works of art, all made from reused clothing and constructed to visually overwhelm our audience with the impact of clothing waste. And we drove the point home with a massive tower of water barrels showing precisely how much water 700 gallons actually is.

Launching on Earth Day, we quickly moved from inspiring massive awareness of the problem to giving people a way to be part of the solution. With a back-to-school movement dubbed I Give a Sh!rt, we asked North Americans to save over 700 million gallons of water through one simple request: forgoing one new T-shirt purchase and instead buying a used one.

With each installation, we created more than an interactive experience for people — generating both paid and social documentary-style content that prompted social good over simply selling. We combined those efforts with a strong earned media push; partnerships with Upworthy, Huffington Post, Triple Pundit; and even a first-of-its-kind paid campaign with Amazon that created a mock shopping page for the most sustainable shirt in the world: a used tee. We also created conversations among policymakers and environmental stakeholders from around the industry. Working with Savers, they launched the first-ever State of Reuse Report, which shed light on the barriers and misperceptions that persist about donating and buying used goods and the educational opportunities available to clarify those misperceptions.

All up, we created a multi-channel experience that truly landed our message and compelled people to join our movement.

Our installations reached an audience with whom our message resonated — users who engaged with the campaign were 36 percent more likely to have a high propensity to shop thrift vs. other people. We took that powerful message of reuse on the ground and put it on the air, with the campaign reaching over 800,000 video views, 175,000 social engagements and 340 million overall impressions.

The movement even expanded into Savers' own stores and with its team members. Across the U.S., Savers' 22,000 employees helped kick off the I Give a Sh!rt message by creating custom T-shirts and displays in stores, and sharing their support through social channels. In fact, their enthusiasm for this effort was so powerful that Savers rolled out a new employee uniform program tied to I Give a Sh!rt as a result.

But what excited us most was the 2 million people who took part in I Give a Sh!rt and made their next new tee a thrifted one, helping save over 1 billion gallons of water— enough to fill more than 1,500 Olympic-sized swimming pools. That's more than enough for use by every person in New York City — and Dallas, Texas — for a day. And enough to surpass our goals by 142 percent. 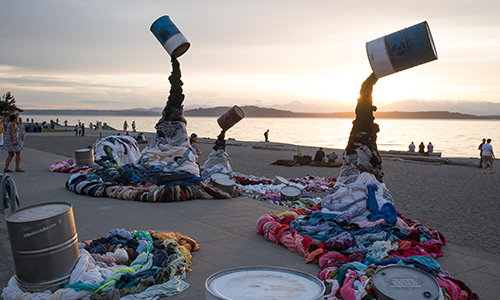