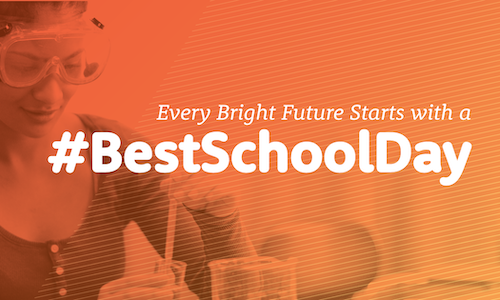 Too many teachers–particularly those in high-poverty communities–lack the classroom resources they need to teach and inspire our next generation of leaders. DonorsChoose.org is a nonprofit website where teachers can create projects for the materials they need, and donors can fund the projects that inspire them. To date, DonorsChoose.org has raised over $450 million for teachers, and funded over 750,000 projects.

In March, DonorsChoose.org and over 50 entrepreneurs, artists, athletes, and philanthropists challenged Americans to support a classroom project and make it the #BestSchoolDay for teachers and students in their communities.

To kick things off, the celebrity funders contributed more than $14 million to "flash fund" classroom projects and to match donations by citizen philanthropists. This act of mass generosity–the single biggest day of funding in DonorsChoose.org history–drew attention from leading media outlets across the country, went viral on Facebook and Twitter, and captured the hearts of teachers, education leaders, and donors nationwide.

Compared to our final results, we began the #BestSchoolDay campaign with modest goals. We hoped to:

Funder & Influencer Engagement: Our team worked for nine months in secret to identify over 50 individuals excited to support schools in communities they felt a connection to, like their hometown or state. We also created a series of 30 videos where funders shared memories of their own "best school days" and announced which communities they chose to support.

Digital Content Partnership: We partnered with The Huffington Post to create a digital hub of #BestSchoolDay content, including a map of funded areas, a funded project counter, articles about teachers with DonorsChoose.org projects, and op-eds from funders explaining the importance of supporting education. Appearing as the lead story on The Huffington Post splash page helped drive significant traffic to the site, as well as conversation on social media.

Media Exclusives: Stephen Colbert's May 2014 generosity inspired #BestSchoolDay when we used the proceeds from auctioning off his Colbert Report set to fund South Carolina projects. To tell the full #BestSchoolDay story, we worked with Colbert, his team, and CBS This Morning to launch the campaign nationwide, with a follow up segment featuring several celebrity funders on The Late Show with Stephen Colbert. We also secured pre-pitched exclusives with specific funders in Fast Company and Associated Press.

Day-of Media: Nearly 12,000 classroom projects across 47 states and D.C. were flash funded at the start of #BestSchoolDay, so we expanded our outreach on March 10 to include local media in funded communities. By securing quotes and videos from our funders in advance, and screening hundreds of teachers spanning major markets, we offered customized stories and interviews for local media that helped generate over 200 local stories.

Video: More than half of our funders prepared brief video messages recounting their own #BestSchoolDay memories and calling on the public to support a classroom, which helped personalize the announcement and generated additional buzz among media and social media. The Huffington Post also produced a mashup of several of the videos to help announce the launch of #BestSchoolDay.

Social Media: We leveraged our own social media channels and those of our funders by creating shareable content, a concise call-to-action, and custom quote graphics. Our vendors and other partners also joined the fun, posting to social media with posters and stickers we sent them.

Email: By emailing teachers the night before the big announcement, our teachers were primed for an explosive social media blitz that lasted well into the weekend. We also customized our emails to funded teachers, letting them know their projects were funded by celebrity funders, which generated even more engaging social media posts. We also alerted our citizen donors that we needed their support and that donations were currently being matched by some of our #BestSchoolDay funders.

Beyond our wildest expectations, #BestSchoolDay became the biggest day in DonorsChoose.org history. We surpassed all of our original goals, raising $16.8 million for classrooms nationwide from over 33,000 individual donors. 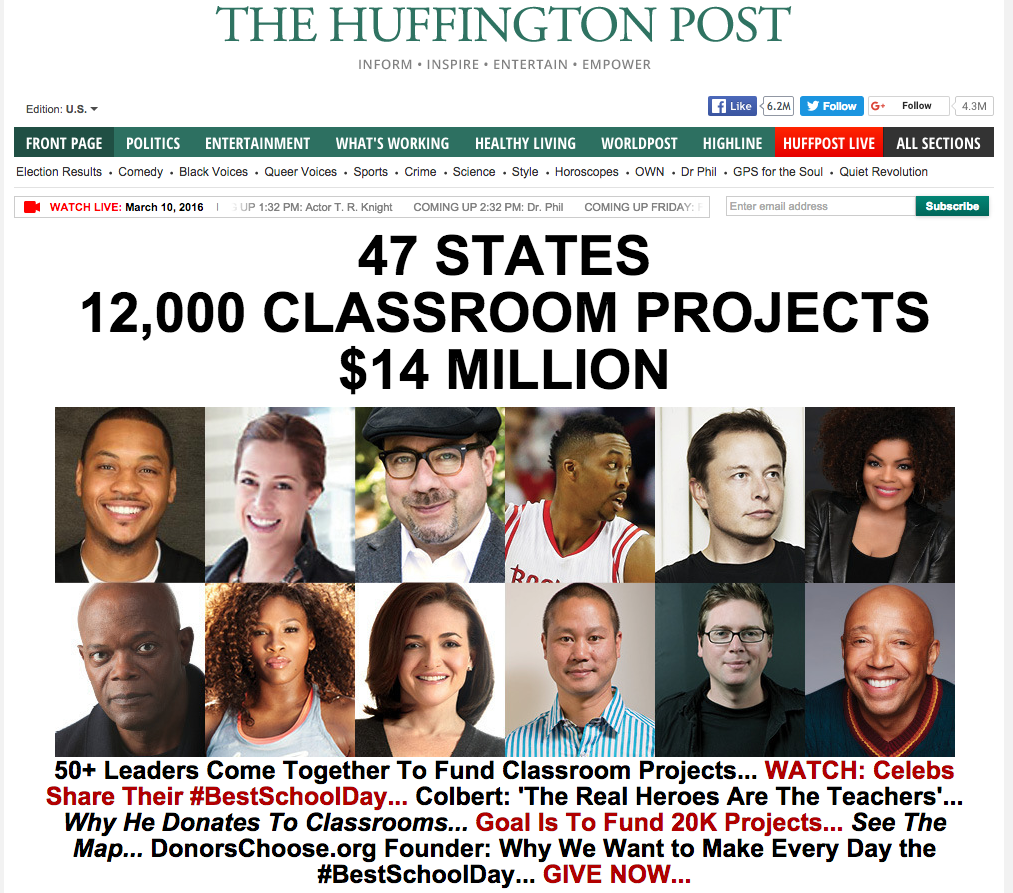 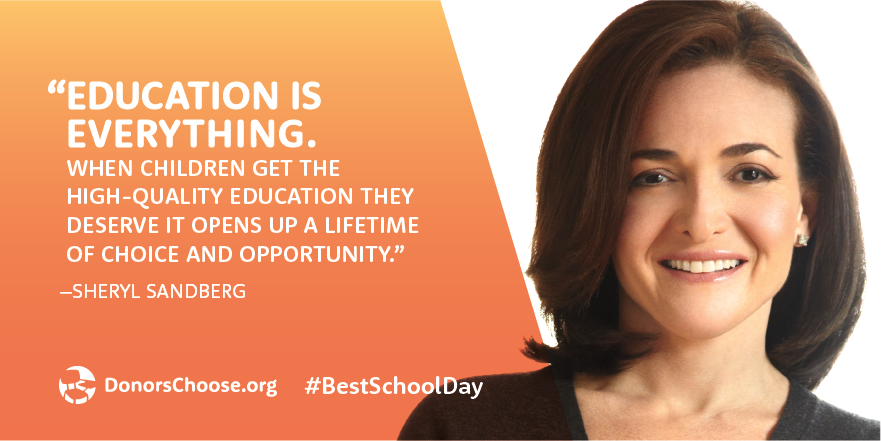 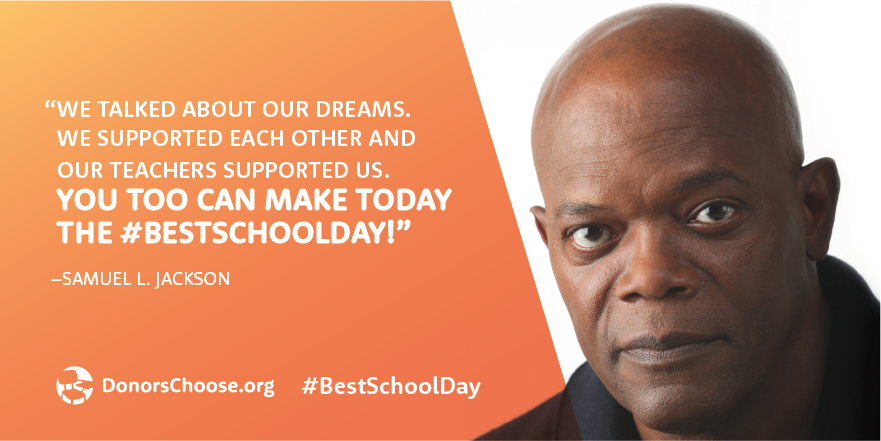 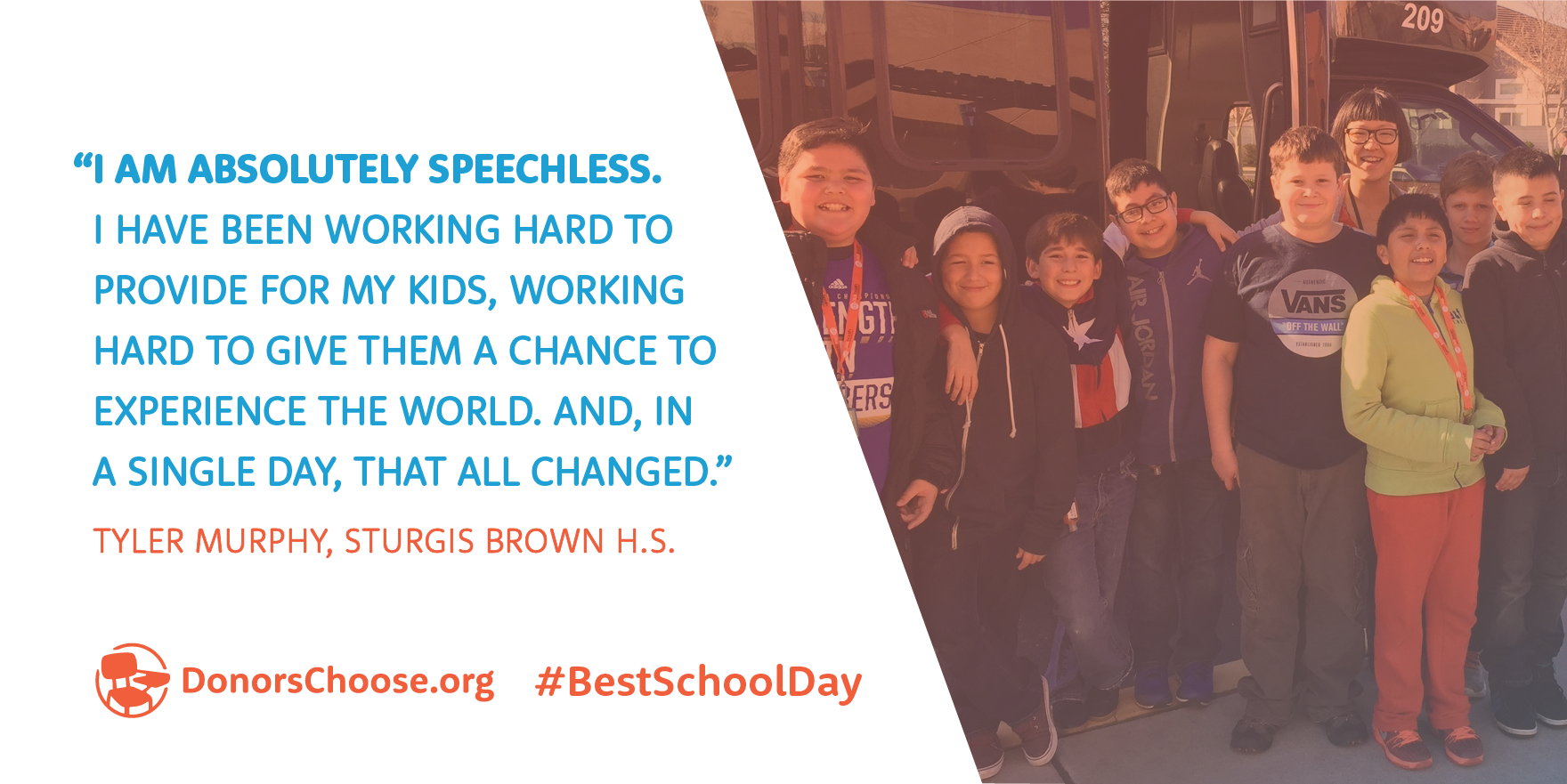