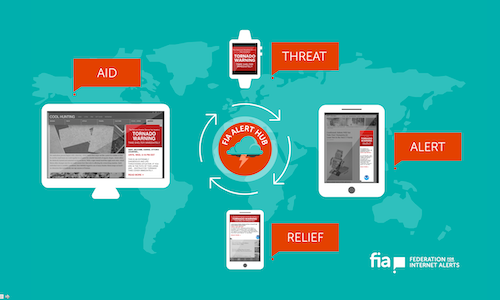 Around the World in 200 Milliseconds

The Federation for Internet Alerts (FIA) is helping save lives, quickly. FIA uses ad technology and the global cloud to disseminate emergency alerts to digital devices around the world in the event of a child abduction or natural disaster. FIA was started in recognition of the massive potential the internet had to save lives and the FIA Alert Hub represents a landmark in its relentless efforts to make the world safer.

The Alert Hub is a fault tolerant, fully autonomous system that was designed specifically to scale the uniform aggregation and dissemination of life-saving emergency messages globally in real time, regardless of technological, geographic and language barriers. The Alert Hub's speed and fault-tolerant design also makes it the link to enhancing existing alerting mechanisms (TV, radio, SMS message), with FIA often serving as the only protocol that keeps all these other alerts active when systems go down.

Within a second of receiving notification of an emergency, FIA extracts relevant information and then generates a dynamic ad unit. The ad units are formatted across all devices and sizes and delivered instantaneously. We purposefully keep the ads simple, with the same look and feel to ensure they are recognized as an alert.

The Alert Hub then streams alerts to the closest geographical datacenter. Data is organized and distributed into a Redis-cluster backed by an Aurora database. Filters organize and cache incoming alerts to identify relevant messages. When an alert matches a desired pattern, it's disseminated to subscribers of FIA in 40 milliseconds. Subscribers such as media companies, ad networks and publishers cover the last mile by delivering a creative ad unit to web banners, mobile devices and billboards.

Since FIA is non-competitive, we were able to unite global media agencies, companies, NGOs, non-profits and alerting authorities and leverage their collective capabilities, resources and expertise to share critical information immediately, anywhere in the world.

FIA is a perfect example of how businesses can use the technologies that power their businesses to serve the greater good. The Alert Hub is an open-source service that is the product of the systems that also serve advertising from media companies – including load balancers, ad queuing systems, data centers and server-less data processing – integrated to leverage the internet's global reach. It is supported by the largest global cloud infrastructure, powered by software developed by ad tech engineers, and globally activated through the use of a standardized alert code – Common Alerting Protocol (CAP).

The impact of this innovation and collaboration has been nothing short of astounding. FIA brought together 15 global alerting authorities and partners. Public response is passionate. One father helped by a FIA tornado warning wrote a letter to the U.S. Congress encouraging the program. Citizens have seen and used social networks to relay support for FIA alerts online. As a result, FIA gained worldwide attention, building relationships across Europe, China, Australia and nine other countries. FIA attended a global event in Rome in 2015 to showcase the Alert Hub.

Over 800+ million alert impressions and 10+ million tornado warnings have been sent through the Alert Hub with geographic penetration into 100+ million devices – as dynamic ad units. FIA's alerts have also assisted in the rescue and return of more than 800 children.

These results are only the tip of the iceberg however as the Alert Hub continues to gain global adoption and helps local communities build more resilient cities, consistent with the United Nations initiative to support Private Sector Reliance for Disaster Resilient Societies (ARISE).

Video for Around the World in 200 Milliseconds 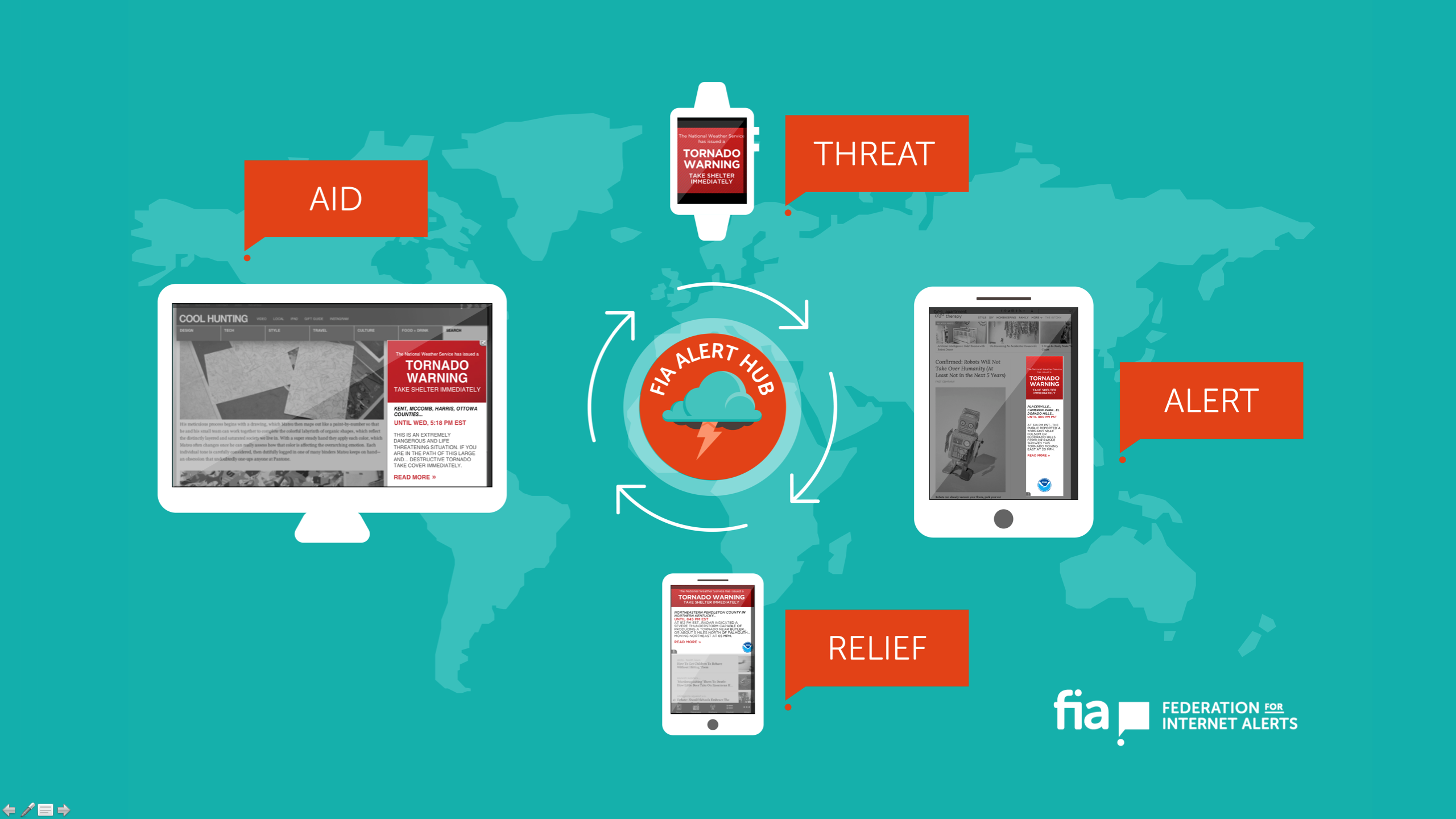 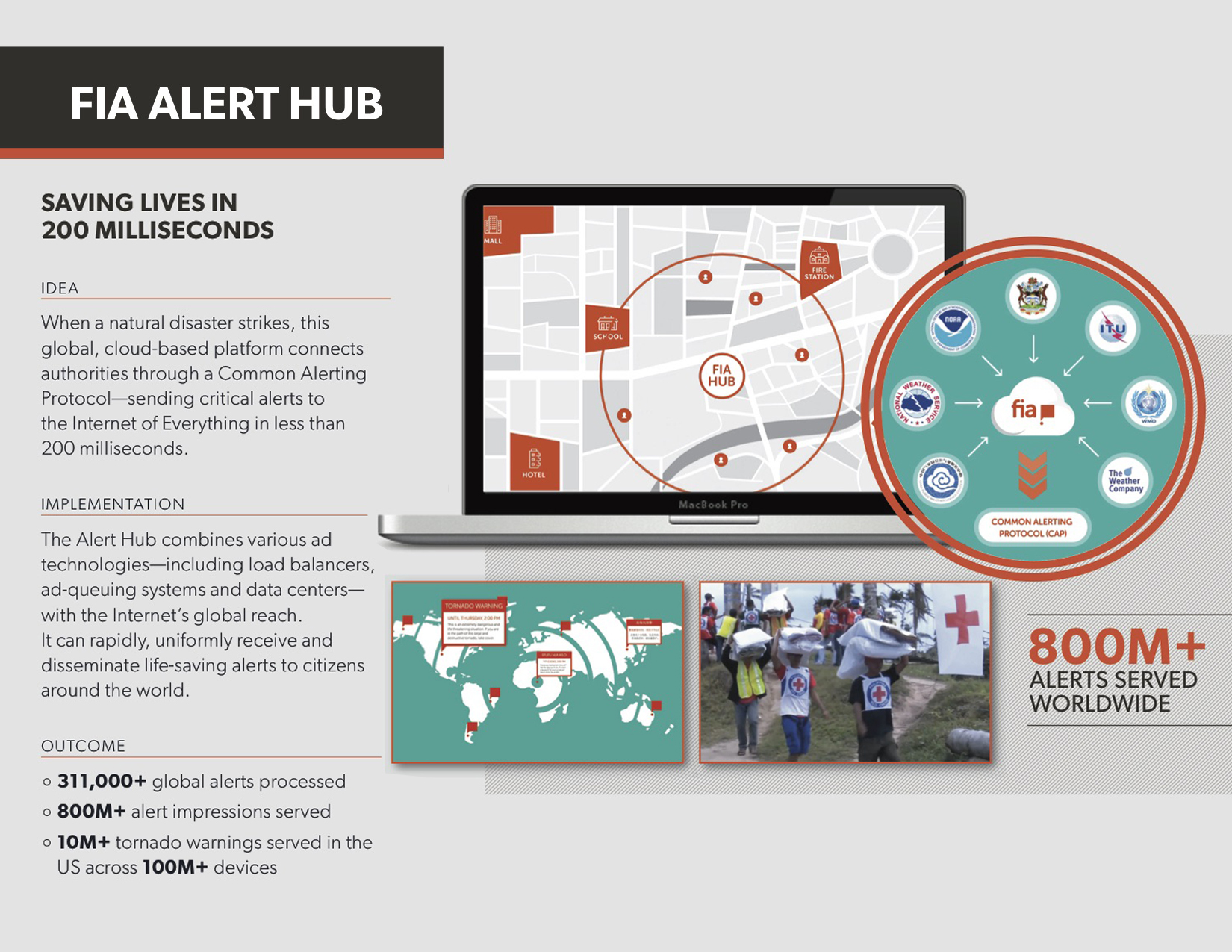