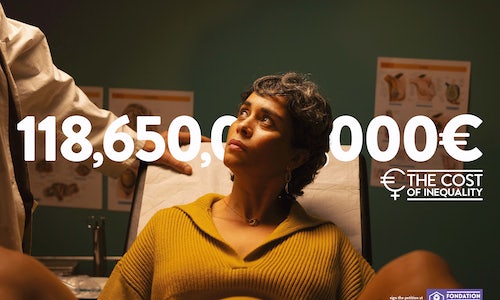 The Cost of Inequality

In France, the wage gap is 39%,  every three days a woman dies at the hands of her husband and inequalities in healthcare mean women experience disproportionately bad outcomes.

During the presidential election, they mobilised over 50 organisations to collaborate on a petition with 10 demands to advance gender equality, referred to as the ‘Emergency Plan’.

FDF asked us for a public campaign to put pressure on the presidential candidates to endorse the Emergency Plan in their presidential pledge.

So during the French presidential election, FDF chose a language politicians actually listen to...

We went from a conversation to a calculation and created ‘The Cost of Inequality’, the first invoice demanding action on the financial impact of gender inequality.

We calculated the annual cost of gender inequality in France.

Then, we turned that figure into an invoice detailing the cost of domestic violence, health discrimination and workplace inequality.

We mailed the invoice to the candidates and printed it in national newspapers that could be ripped out, signed, and folded into a pre-addressed envelope.

Online, people shared the invoice and tagged their candidate holding them accountable for the 118 billion euro deficit.

For the first time, people could invoice their government for change.

To get France’s politicians and key stakeholders to finally act, we had to reframe gender inequality from a women’s problem to a society problem.

By illustrating the real financial impact of ignoring women and representing this cost in all areas of life and for everyone (public health indicators, children’s wellbeing, the economy, life expectancy, happiness) we were able to reach people not necessarily sensitive to gender equality issues.

The combination of this wider audience together with a tangible calculation enabled us to hold those in power accountable for the first time.

Further inaction would make us all complicit – if we choose to ignore this cost, we are choosing to spend hundreds of billions of euros every year to uphold the unjust treatment of half the population.

First, Dr. Lucile Peytavin (Association for Gender and Statistics) and the FDF worked out the financial impact of workplace inequality, health discrimination and domestic violence.

Then, we turned this number into an itemized invoice that we sent directly to every candidate in the presidential election, on the eve of International Women’s Day.

We revealed this number to the public by posting the invoice online and printing it in national newspapers that could be ripped out, signed and sent to the candidates.

We amplified with an emotive online film, TV, print, radio, and social & influencer campaign that ran until the first round of the presidential election on April 10th.

We shared the comprehensive study outlining how we calculated the cost to engage the political community further.

Meetings were held to convince each candidate’s staff of the campaign’s importance and evaluate their interest and willingness to endorse the Emergency Plan.

Video for The Cost of Inequality 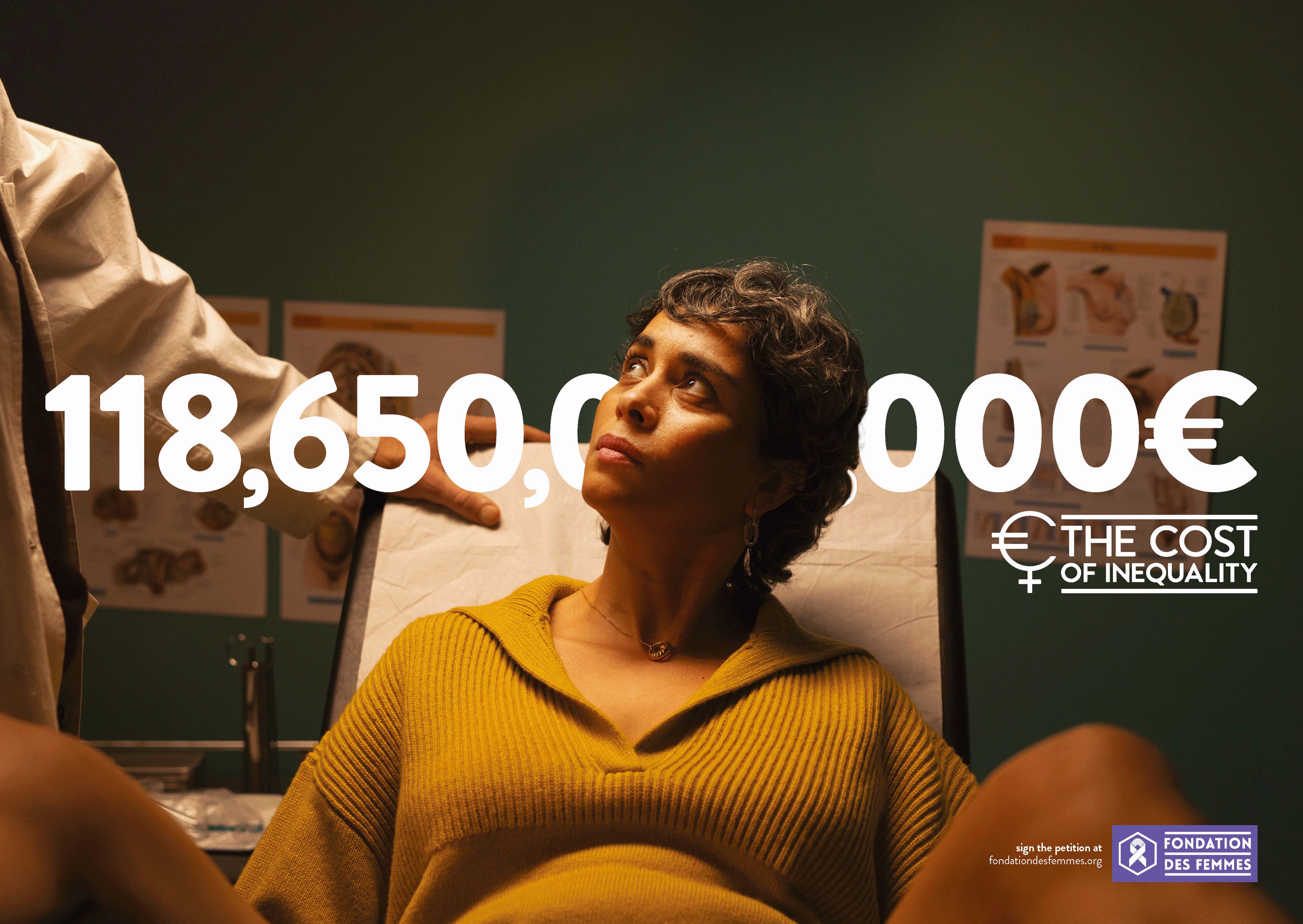 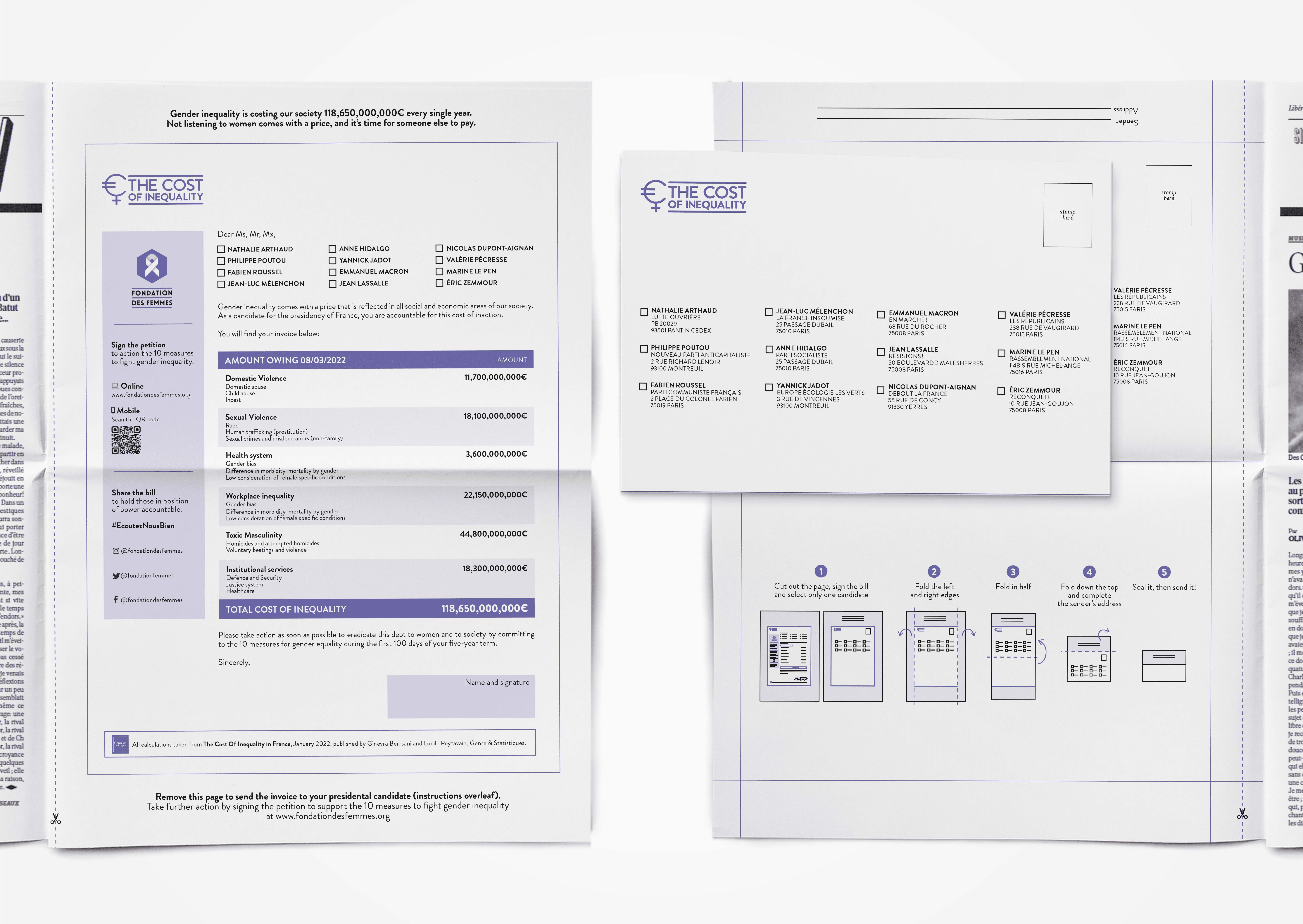