#DaaSJams Helps Citrix Top the Charts with IT Community

With the events of the past few years, the world forever changed — and the way we work changed with it. While most employees were ready to embrace the new environment of remote and hybrid work, some organizations were not. They lacked something critical: the technology to power this new working model.

A KPMG report shined a light on this, finding that 67% of digital transformation leaders accelerated their strategy, and 63% increased their budgets because of COVID-19, with 67% listing a “digitally enabled technology architecture” as top priority.

Citrix had the answer to this expanding market need with its cloud-based Desktop as a Service (DaaS). While it was already a well-known market leader in on-premises virtual desktop infrastructure (VDI), decision-makers were less aware of its cloud-based solution, which is critical to empower a true remote or hybrid workplace.

The ask: act fast on this timely opportunity by building awareness and education with target customers through social media.

But we had to do so delicately, promoting the cutting-edge DaaS solution while not polarizing companies already using its older on-premises solution.

Our objectives were clear cut:
1. Build awareness for and educate the core buyer group about Citrix’s DaaS solution
2. Drive engagement with the Citrix DaaS solution content
3. Drive IT decision-makers and prospects to Citrix’s DaaS website resources
4. Exceed existing average KPIs:
-1-3% organic engagement rate on social media
-An avg. CTR of 0.24-0.78% on campaigns
-An avg. video view rate of 15-48%
-Avg. time on page of users driven to the site: 2:22

We started with a robust set of research from third party reports, trends, Citrix buyer insights and analysis of past Citrix campaigns. It uncovered some critical insights: we needed to educate on and address technical product topics, had to grow awareness with numerous decision makers, and needed to transcend the drab, heavy-handed product marketing that was flooding the industry.

This tactical intelligence would provide invaluable direction as we built out the creative assets and promotion plans. However, it was our arrival on a singular insight that became the aha moment for our campaign.

Through a robust exploration of our target buyer’s vantage point, informed by both Citrix’s buyer insights research and third-party intelligence around the IT buyer journey and market in which we were competing, we came to one (horrifying) conclusion: buying B2B technology is a battle.

This “IT Buying Battle” typically comprises painfully dense, dry and technical content to inform a highly complex purchase.This became the bedrock of our campaign, as we morphed the insight — quite literally.

Armed with our organizing idea, “IT Buying Battle,” we set out on our strategy to drive awareness and educate on the two products’ technical value propositions in an entertaining way.

We decided we wouldn’t just let these products, Citrix DaaS and VDI, speak for themselves. We would have them rap, sing and dance too, in a social media video series that veered far from the norm of B2B marketing content.

Enter DJ DaaS and The Notorious VDI, the first-ever, musically inspired Citrix-branded characters. By embodying the two products through animated robots (with continued iteration until we perfectly anthromorphize the two products) and a series of rap battles and music videos featuring custom lyrics and music, we could incorporate all the critical campaign elements identified through our insights and unleash a campaign unlike anyone else in the industry.

For four months, we “dropped” weekly videos of the two ’bots battling it out and singing across four musicla genres (to appeal to a diverse set of tastes) in short, animated videos, sharing how they deliver in a specific category. The videos were shared organically and through targeted paid promotion on social media with attention-grabbing copy and the hashtag #DaaSJams, driving traffic back to two key product landing pages and four blogs.

The campaign — a creative risk that took courage for both agency and brand — reached Citrix’s audience in the exact way our insights proved necessary, exceeding client expectations and industry standards:

We drove high engagement with the Citrix DaaS content, with:
-Nearly 20% average CTR across all social media platforms and 85% average Campaign Video View Rate (both more than double the industry standard and Citrix year-to-date average across all campaigns)
-1-5% organic engagement rates across social media platforms (vs. a 1-3% industry benchmark), far surpassing Citrix’s average social media engagement rate of 0.6%-1.7% year-to-date
-A fanatical response, and feedback from Twitter and LinkedIn users, including: “One of the best and most creative ways to differentiate between #VDI and #DaaS.” and “I love this! More projects should get ideas like this!!” and “Citrix DaaS features explained clearly in fun [and] Creative mode, Awesome!! 👍”

We drove IT decision makers and prospects to Citrix’s core DaaS website resources and pages, with:
-211 million clicks through to the website in just four months with an average of 6 minutes and 9 seconds spent on campaign landing pages, which both eclipsed Citrix’s average time on its website year-to-date of 2:22

Video for #DaaSJams Helps Citrix Top the Charts with IT Community 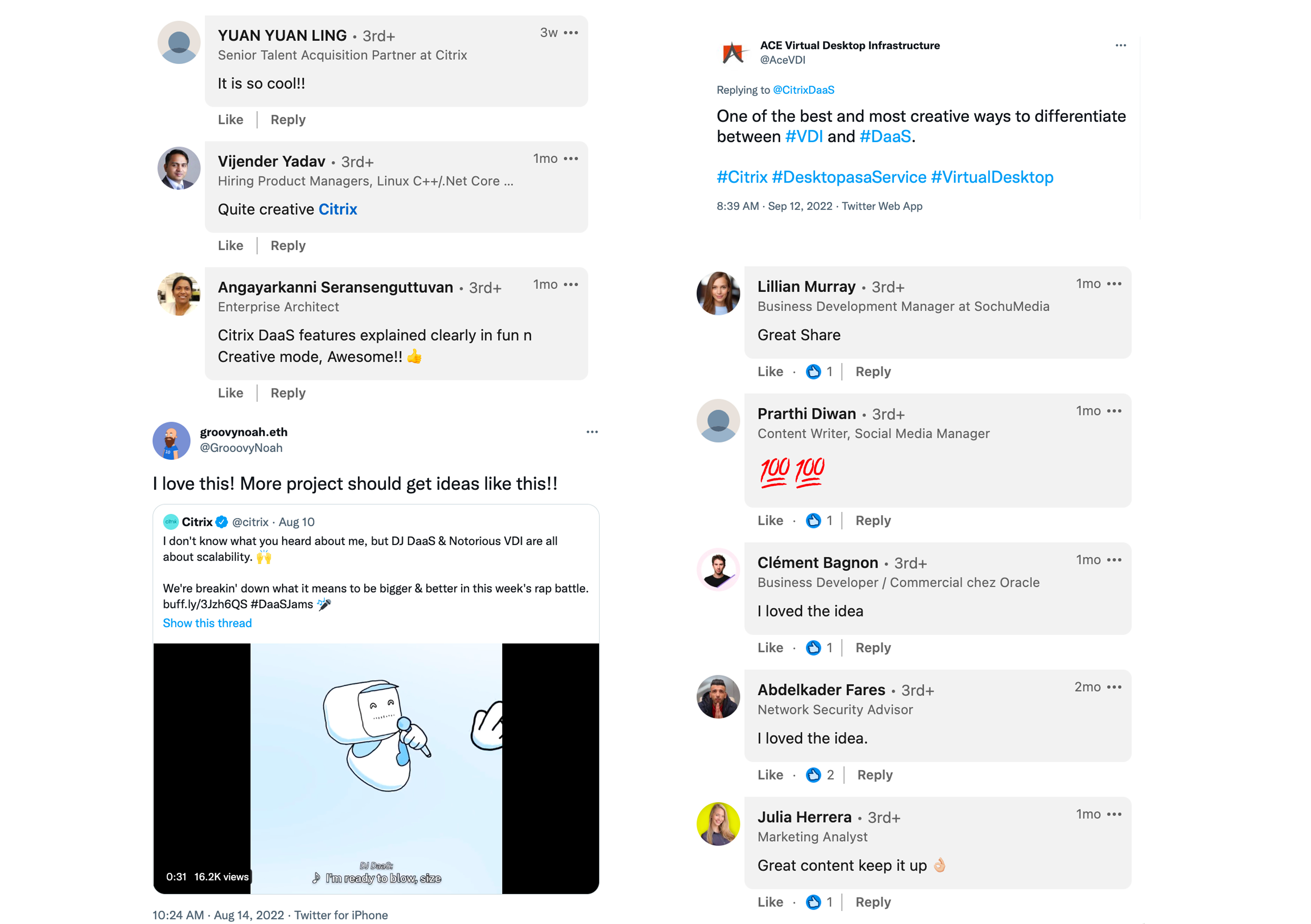 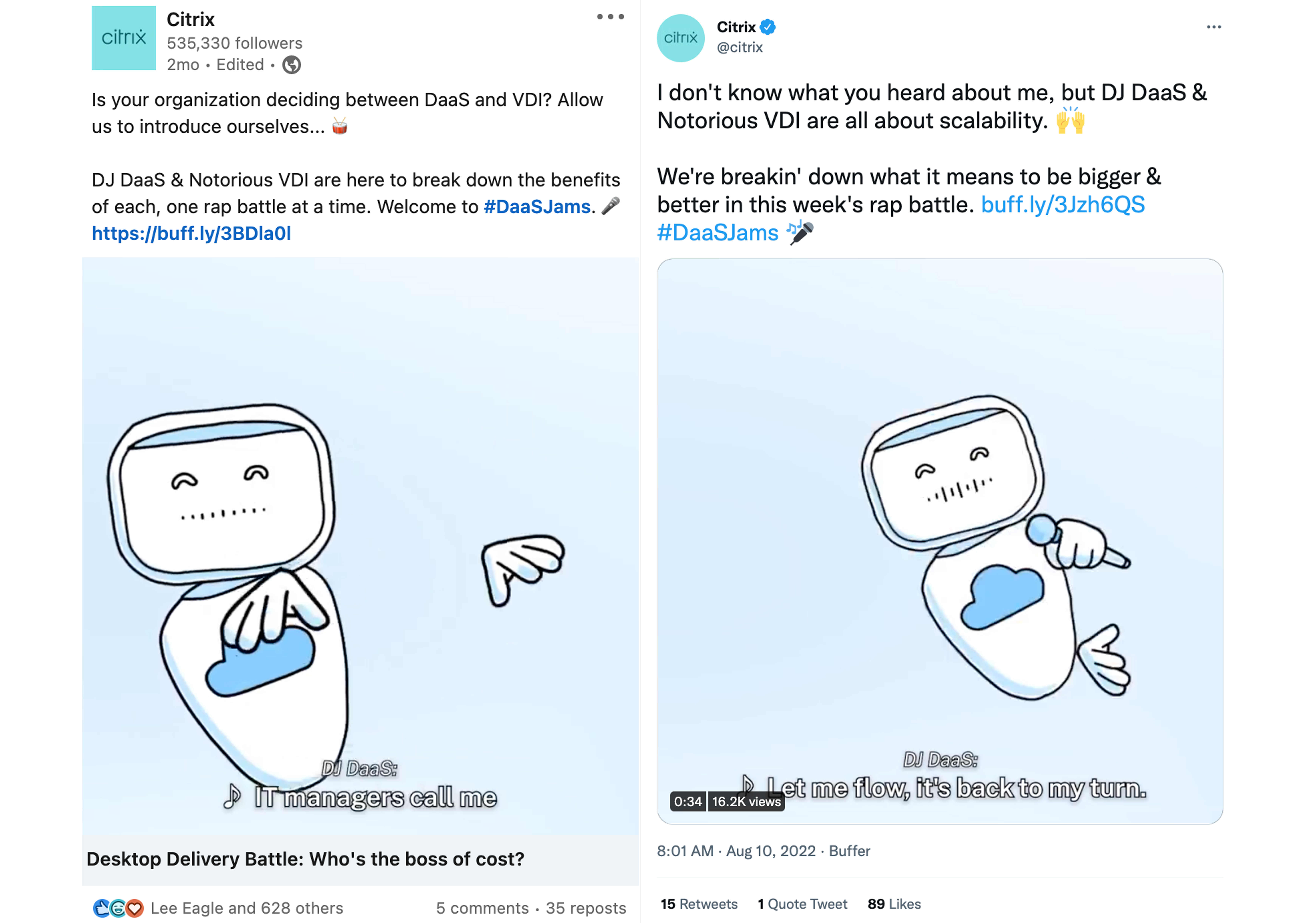