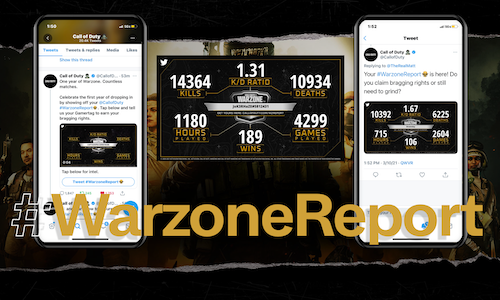 Audience Honor in Single Post or Activation, Creative Use of Technology

Entered in Creative Use of Technology

It was the one-year anniversary of Activision’s newest battle royale game: Call of Duty: Warzone. To celebrate, Activision knew the best way to ignite the Warzone community’s love for the game over the past year was to lean into the one thing Call of Duty gamers have long cared about more than anything else: their stats.

But there was a problem. Activision had Warzone gameplay data, but didn’t have the platform to socialize or distribute it. They needed a partner that had the scale for Activision to engage a majority of their players, the conversational power to let their players talk to each other about their stats, and the creative flexibility to build the exact type of native experience they wanted. That platform could only be Twitter.

Together with technical support by IC Group, the teams created the #WarzoneReport, a first-of-its-kind API integration directly between Twitter and Activision that visually shares a gamer's custom Warzone stats onto Twitter simply by Tweeting. Using real-time gaming data, the #WarzoneReport is a personalized, visual report of a players’ stats for Call of Duty: Warzone. Available exclusively on Twitter, this activation uses the player’s unique Gamertag from Call of Duty Warzone to pull stats onto the Twitter timeline for all the gaming world to see. And, more importantly, to talk about.

Gaming is a lifestyle. And whether you’re hardcore or recreational, it’s a part of how you show up. Because of this, gamers are the most competitive breed in the world. Their stats show how good they are or how much better they need to be. Stats prove power, expertise and domination. They are the lifeblood to bragging rights as a gamer. But what good are bragging rights if no one is there to see? For lovers of Call of Duty, the #WarzoneReport turns trash talk into reality by putting each gamer’s numbers on display in the public forum of Twitter.

After six months of development to create an integration between the platforms, engaging formats and an exceptional user experience, the #WarzoneReport launched on March 10th, exactly one year after Call of Duty: Warzone was released. To ensure massive participation, there was no access requirement, membership, or gaming skill level needed to participate. All gamers needed to do to get their custom #WarzoneReport is to do what they are already doing, Tweeting. Just Tweet your Gamertag @CallofDuty with #WarzoneReport at anytime and your up to date #WarzoneReport will be sent back to you within seconds with your Gamertag and stats dynamically layered onto the image - as if by magic. A coordination between the Activision and Twitter marketing teams ensured the launch was a global success, making headlines in the gaming community around the world. The excessive immediate demand and success of the #WarzoneReport led Activision to boost the experience organically and with paid media on multiple occasions to its community throughout 2021, and the functionality still remains an exclusive feature for the Warzone community today with seasonal creative refreshes and unique art style changes to keep the report creative fresh for the user.

The #WarzoneReport is one of the fastest-spreading brand activations in Twitter history. It was trending after a mere 7 minutes of going live, with no paid media support. At launch, it quickly became the #1 Trend in the US and #3 Trend worldwide in less time than an actual game of Warzone takes (approximately 25 mins) and did so completely organically.

Within the first 36 hours #WarzoneReport had surpassed 100,000+ successful personalized reports delivered, with nearly 20% of successful users loving the experience so much that they requested more than one report.

The #WarzoneReport was boosted organically on multiple occasions throughout 2021 and was the #1 US Trend on Twitter at 3 separate occasions throughout the year. Today the #WarzoneReport functionality has become an everyday part of the Call of Duty community's experience on Twitter, having delivered 265,000+ successful reports to more than 220,000+ players worldwide. With over 330,000+ mentions in 2021 (nearly ~34,000 Global mentions per month) #WarzoneReport has truly transcended from a one-time marketing launch to become a permanent fixture in Call of Duty gaming culture on Twitter. 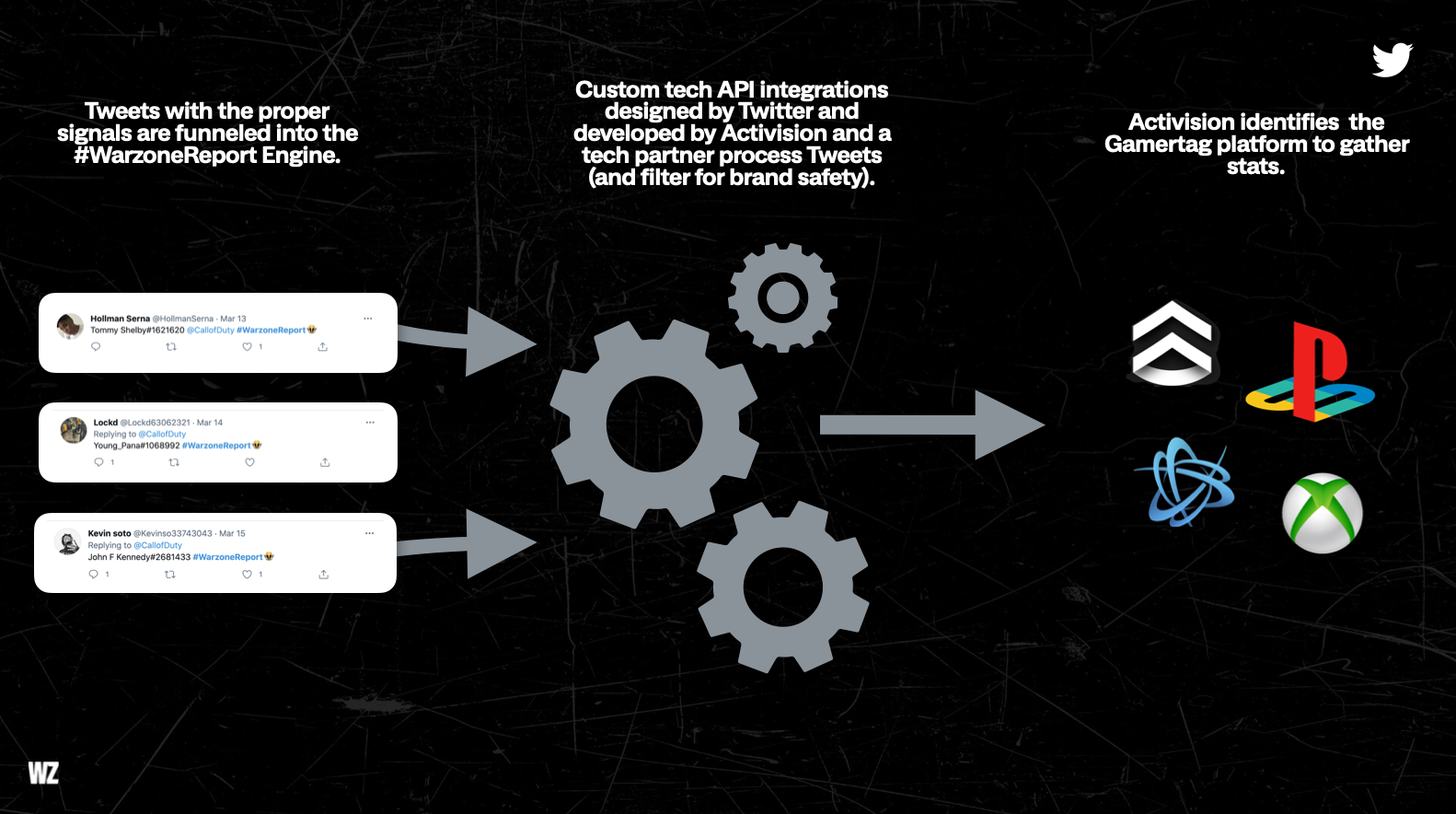 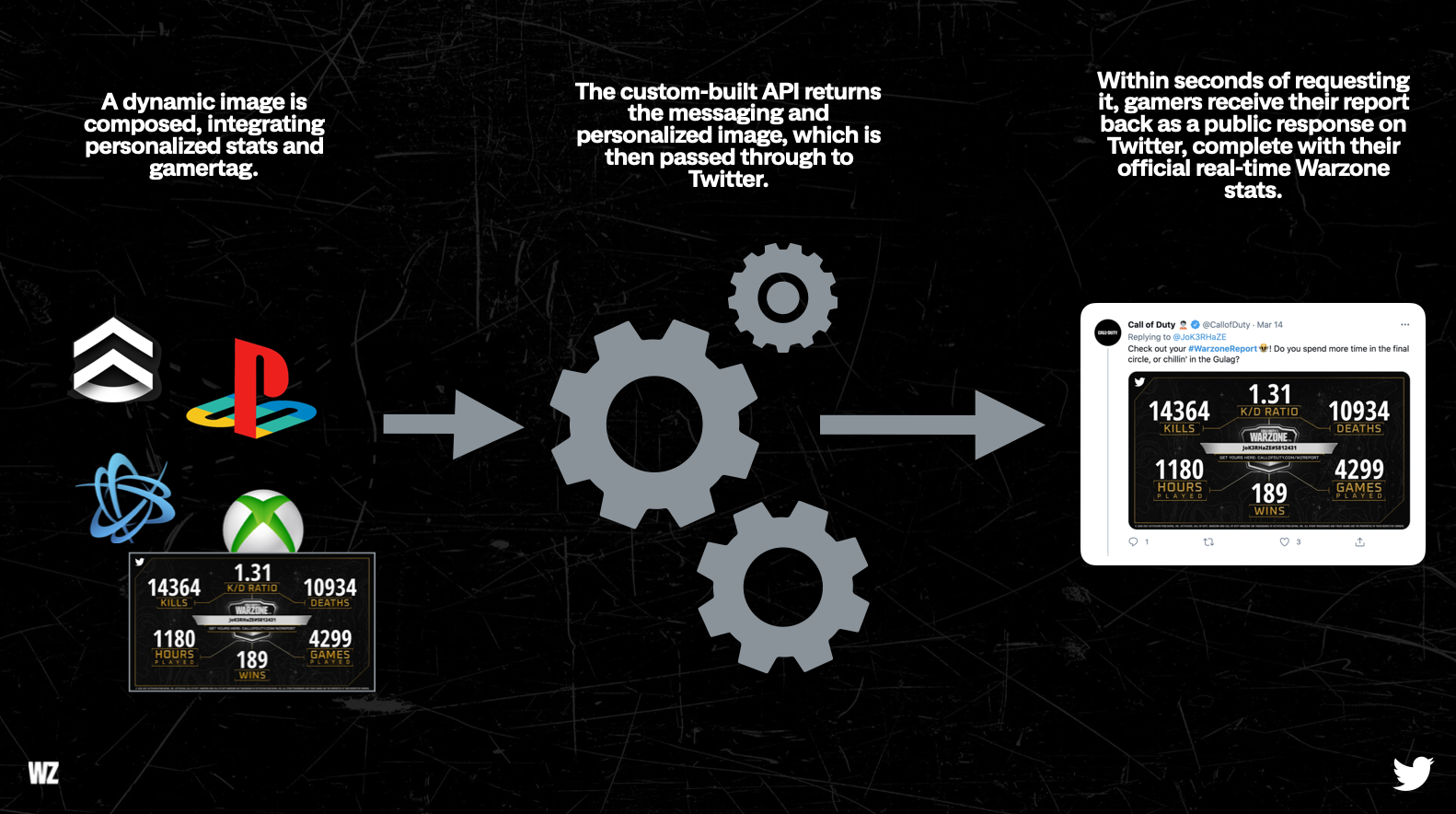 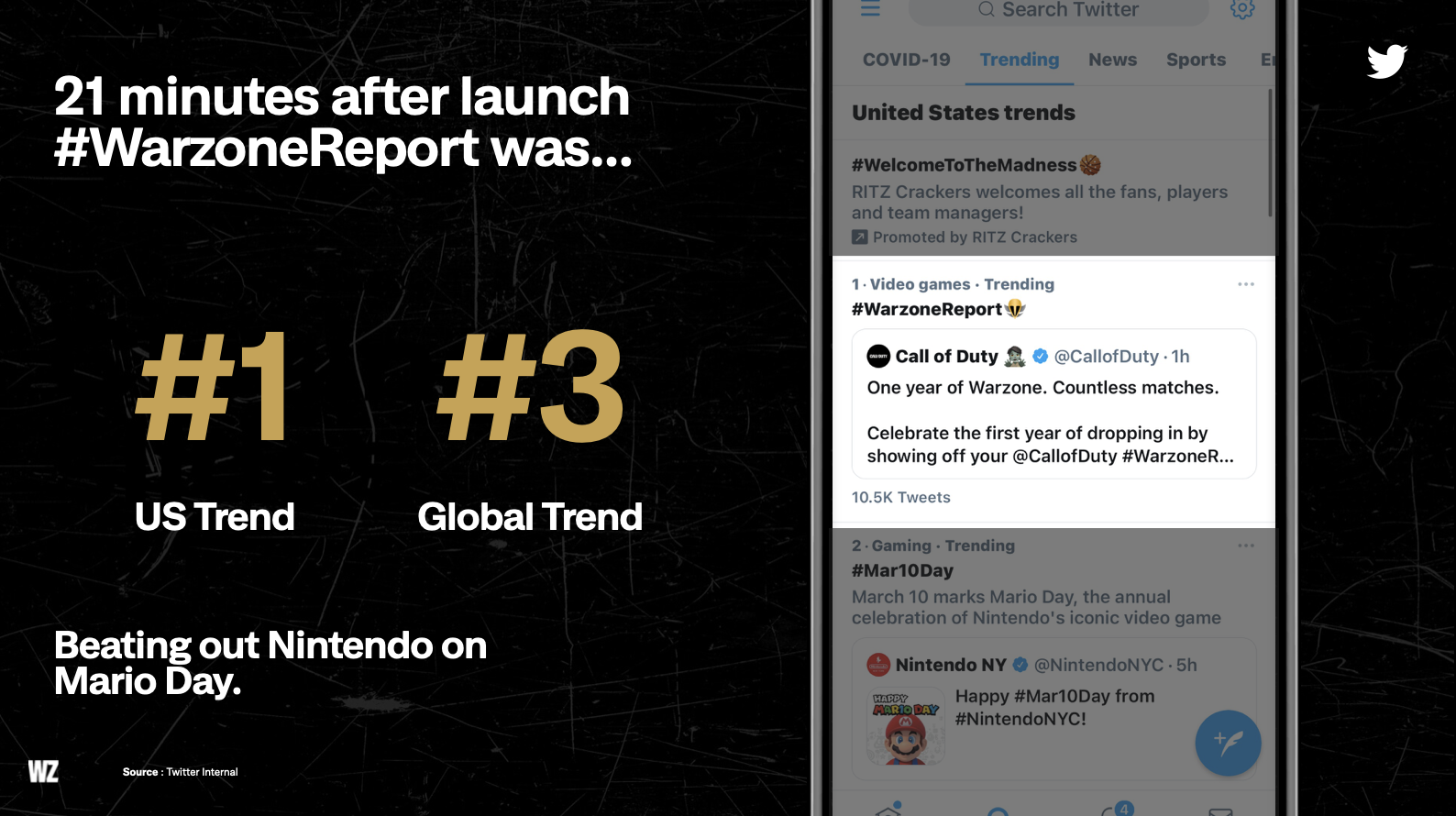 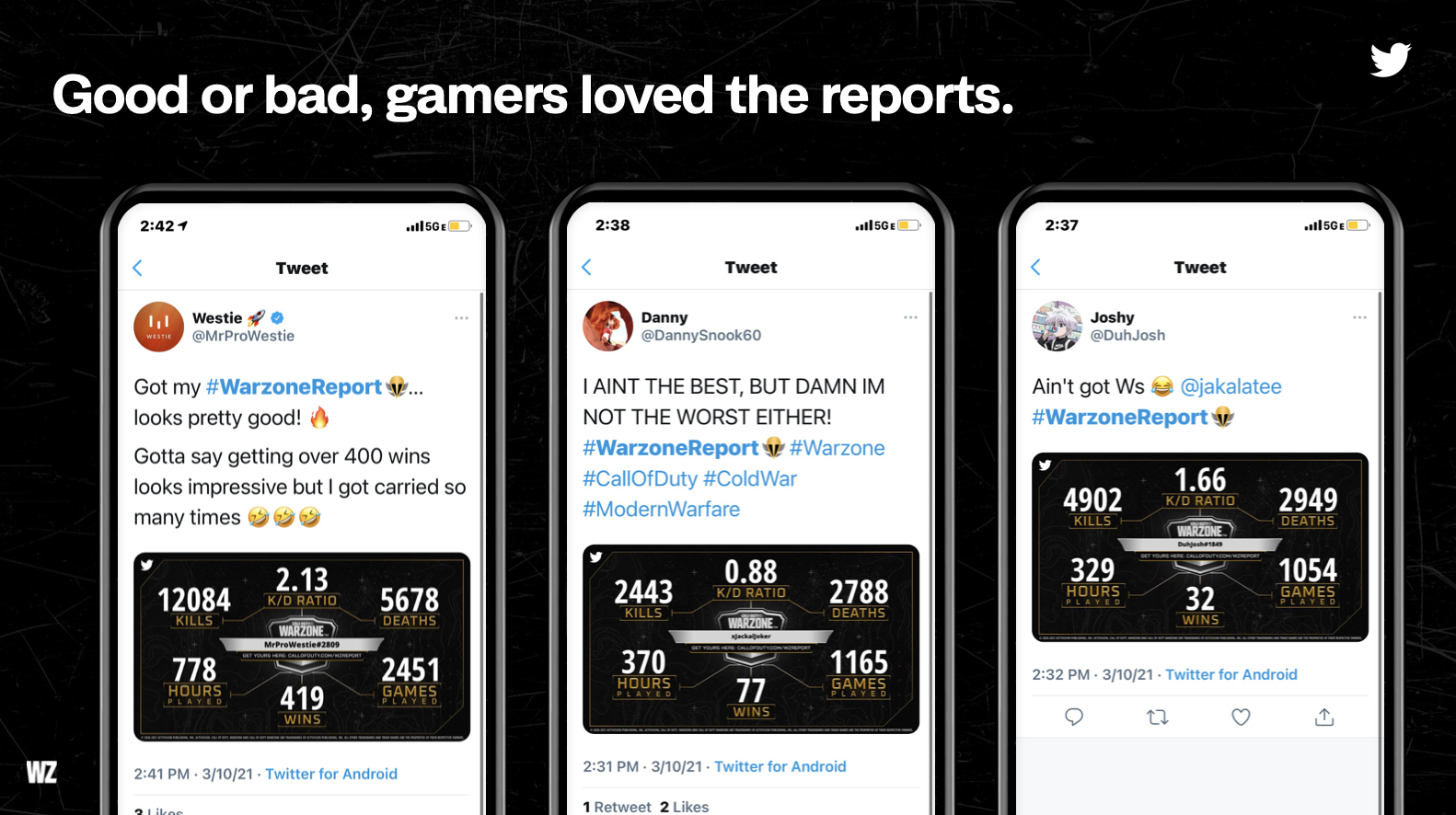 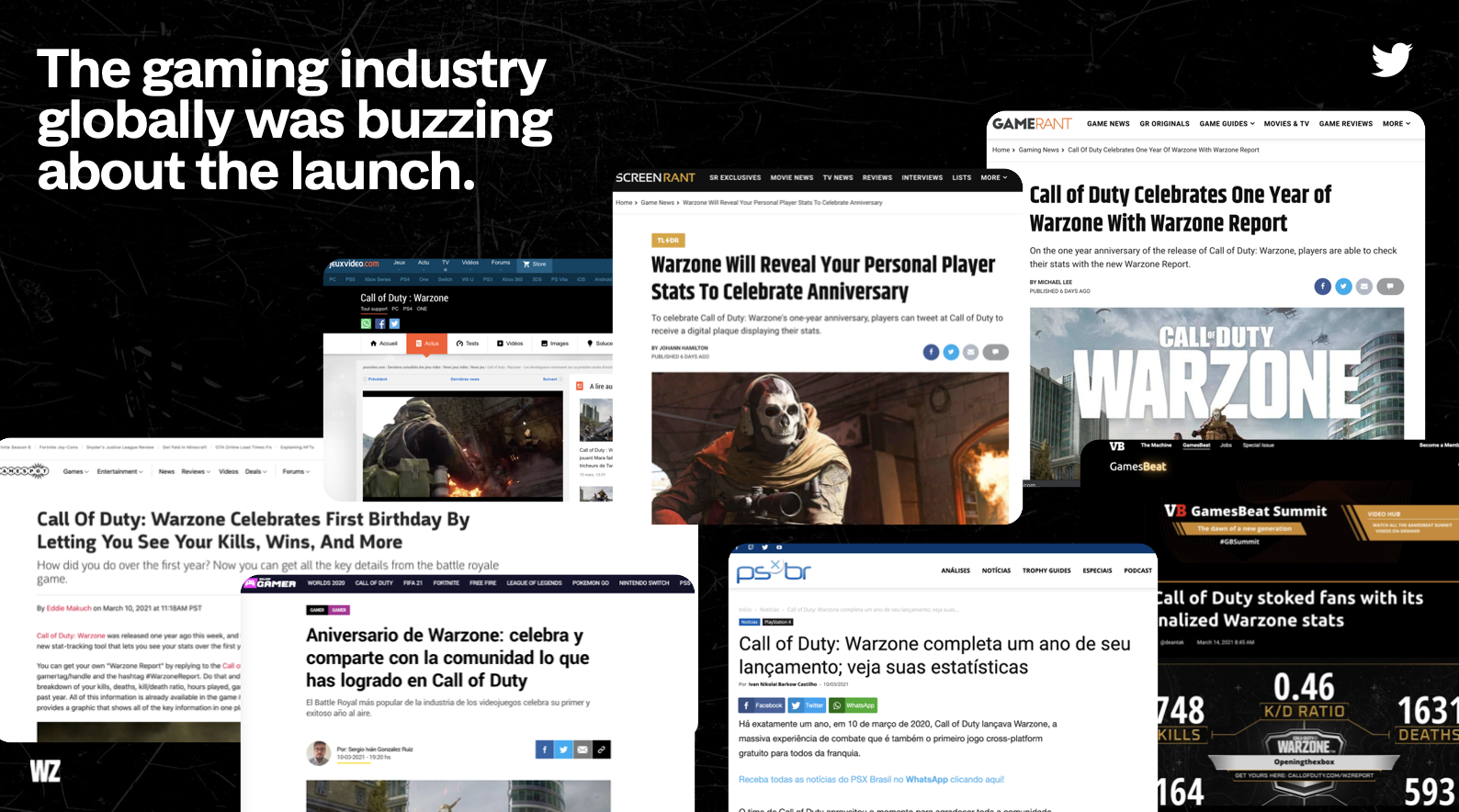 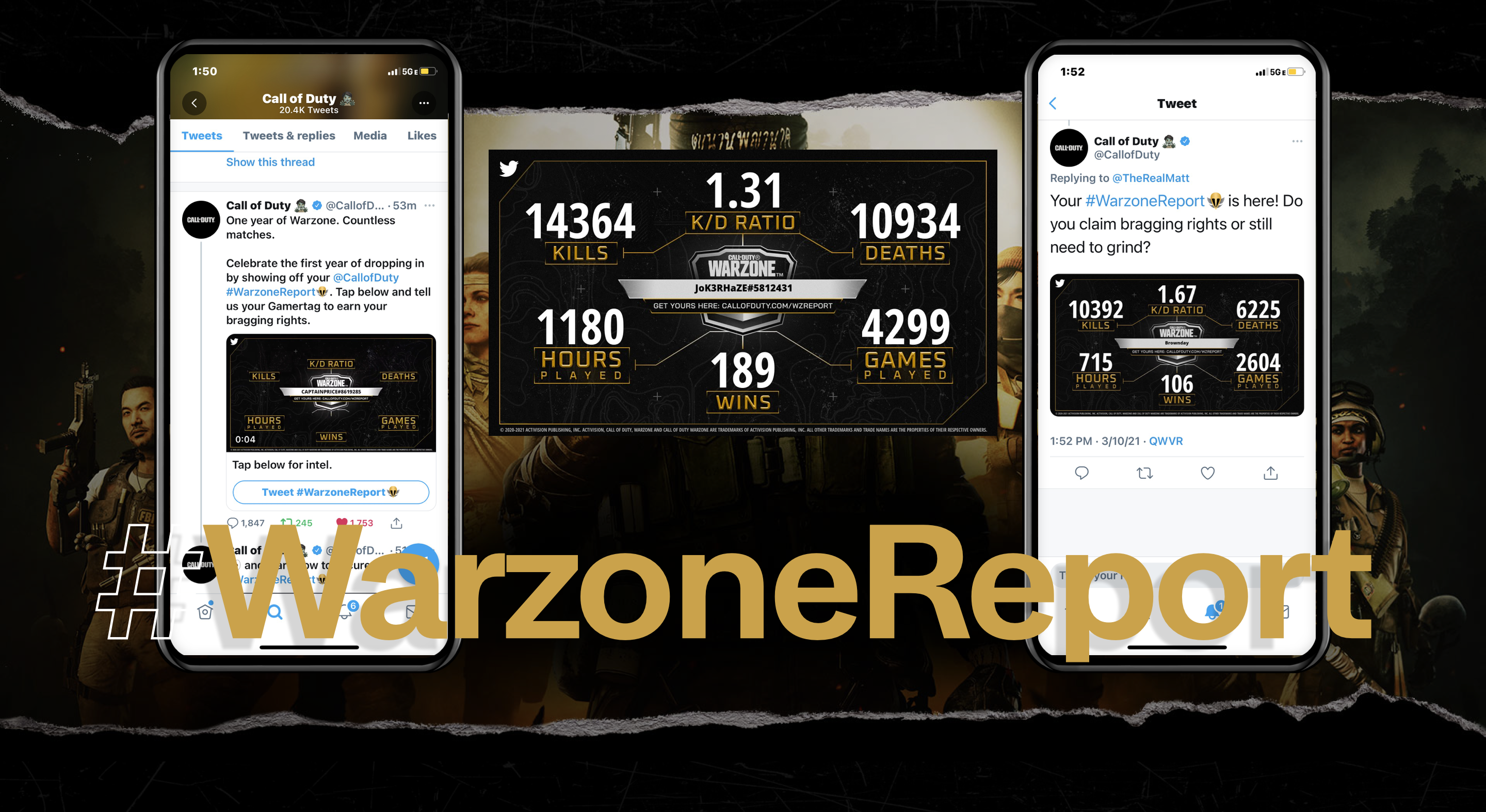