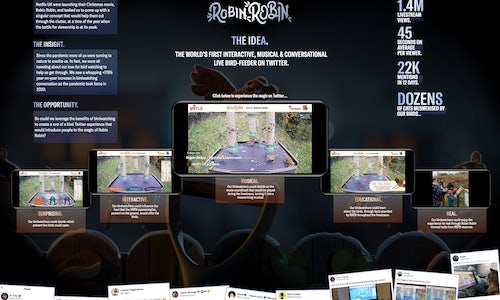 Netflix UK were launching their Christmas movie, Robin Robin, and tasked us to come up with a singular concept that would help them cut through the clutter, at a time of the year when the battle for viewership is at its peak.

Since the pandemic more of us were turning to nature to soothe us. In fact, we were all tweeting about our love for bird watching to help us get through. We saw a whopping +178% year-on-year increase in birdwatching conversation as the pandemic took force in 2020.

So could we leverage the benefits of birdwatching to create a one of a kind Twitter experience that would introduce people to the magic of Robin Robin?

So we had an idea: what if we simultaneously used “real life” Robins tweeting in the world to launch the movie Robin Robin on Twitter? Our very own “NESTFLIX” was born: a soothing and magical livestream featuring birds (including robins!) flying & feeding through the christmassy atmosphere of Robin Robin, live on Twitter.

But we didn’t stop there.

We made the live stream interactive:

We wanted our birdwatchers to take full part in the experience. They could interact with the birds and the livestream elements by voting through live polls. This way people could decide on the food the birds would enjoy or the movie soundtrack that would be played, turning this live stream into a real Christmas musical...

We made the livestream educational:

In order to make this moment both entertaining and educational, we displayed bird facts from the RSPB, so people could know more about all the visitors that would appear on the livestream. This was a relevant space to incorporate the RSPB’s mission and expertise in the activation.

We made the livestream memorable:

We wanted to leave people who liked the Tweet with a special message from Robin herself, straight in their notifications, so they could continue to explore her magical world with Christmas recipes, costumes, decorations...

We made the birdwatching experience real with #RobinRobin themed trails...

People who watched the live stream could also head to one of the RSPB reserves to observe the birds in real life, while immersing themselves in the world of #RobinRobin. This meant to blur the lines between the magic of the movie, and the real world of our favourite birds.

Netflix UK reached a large audience of fans who took notice, remembered and talked about #RobinRobin, at the busiest time of the year.

We counted 1.4M views of the livestream, 519K minutes watched (that’s an average of 45 seconds per viewer) and 22K mentions of #RobinRobin in 12 days. Last but not least, Netflix UK also reached an unexpected audience, as we had the surprise of finding dozens of cats, mesmerised by our birds...

By getting people to pause in their timeline and talk about birds and robins in particular... Netflix UK smoothly got people talking about #RobinRobin. 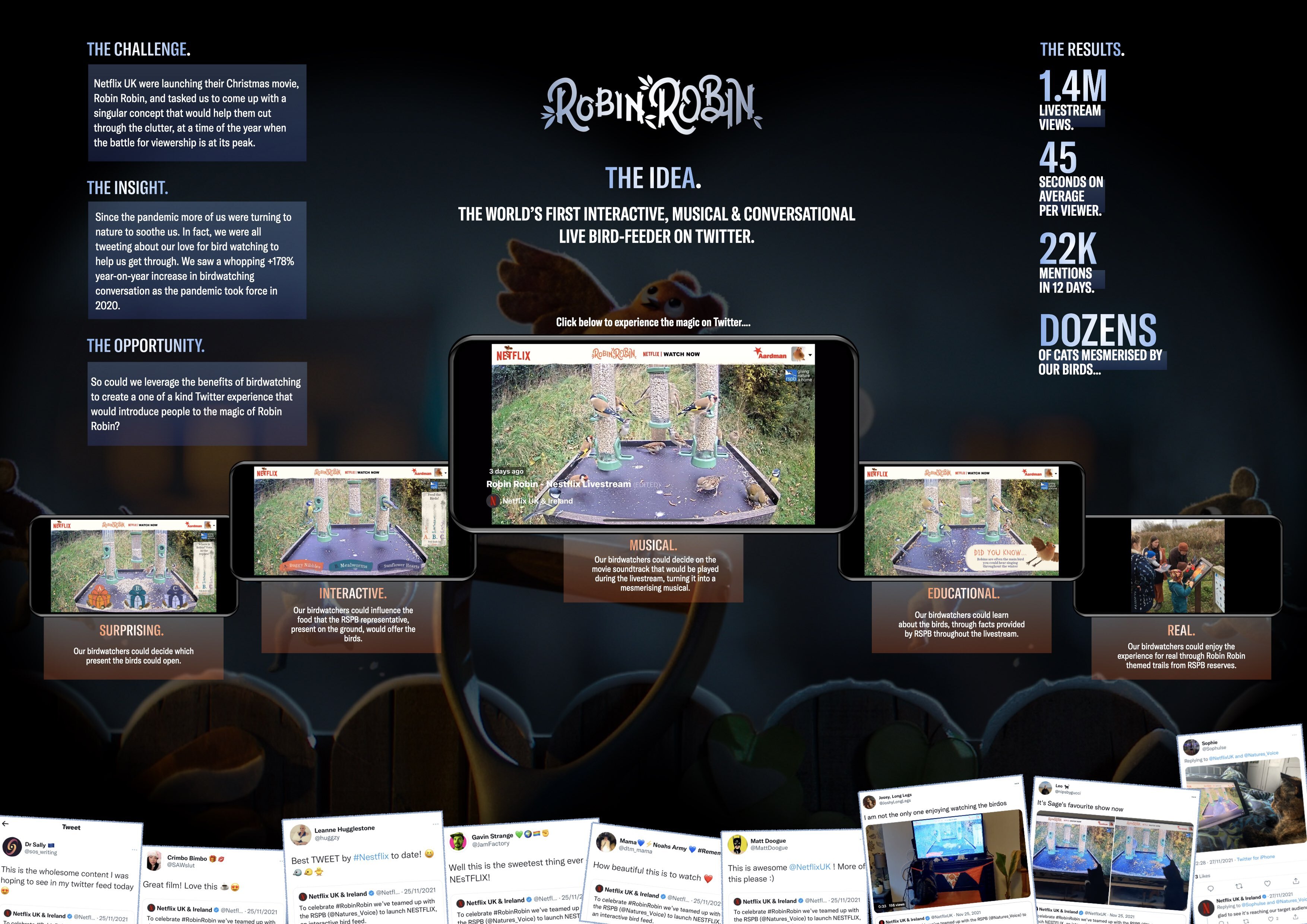