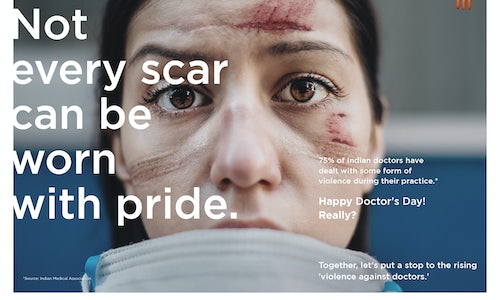 Research from the Indian Medical Association shows that 75% of Indian doctors have dealt with some form of violence during their practice.

Since the beginning of the pandemic, images of healthcare professionals with ‘marks caused by masks’ had been circulating on social media platforms. Those scars were proof of their commitment to their work.

Our campaign was born of this idea, which brought to light the several scars caused by violence against doctors, inflicted by angry patients and families of patients.

The ‘Happy Doctors Day, Really?!’ campaign, launched on Doctor's Day, depicted the scars which doctors couldn’t show, and which people did not acknowledge and share. Scars (physical & mental) that doctors should not have to suffer from.

Objective: To raise awareness about violence against healthcare professionals and earn them the respect they deserve, which goes beyond a simple 'Happy Doctor’s Day'

The DVC was published on all digital platforms - Youtube, LinkedIn, Twitter, Instagram, and Facebook. The Print Ads were published in The Times of India. There was coordinated online and offline amplification for the campaign in order to reach the maximum users pan-India.

With the rising violence against doctors during the COVID pandemic, it was imperative to remind people of the work being done by doctors, and raise awareness against this violence through simple consumable content for the Target Group.

We broke down a complex, complicated topic into a simple-to-understand idea through the DVC, as well as the print ad and other social media creatives. Stock images similar to the ones circulating on social media, of healthcare professionals with scars from masks, were digitally edited to depict scars and injuries caused due to assault on doctors.

The imagery, while simple, was hard-hitting and caused users to pause and reflect upon the messaging. The DVC represents a family setting, where a doctor returns home, battered and bruised, to the shock of his wife and daughter.

By creating a sensationalized depiction, we aimed at bringing the spotlight on a very normalized issue that was in the news every week.

The campaign was launched simultaneously across all digital platforms, as well as in print media, on the occasion of Doctor's Day (1st July 2021). The DVC was released across all platforms, followed by social media creatives which mirrored the print ad creatives in the Times of India.

User-generated content in the form of reactions and shares was re-shared by the brand's digital handles across Twitter and Instagram, amplifying messages of support for the communication, as well as the cause.

The campaign was launched on 1st July 2021, Doctor's Day, and received sustained engagement till 4th/5th July.

The campaign was recognized and covered by leading social media publications such as Social Samosa, Social Media Dissect, etc. 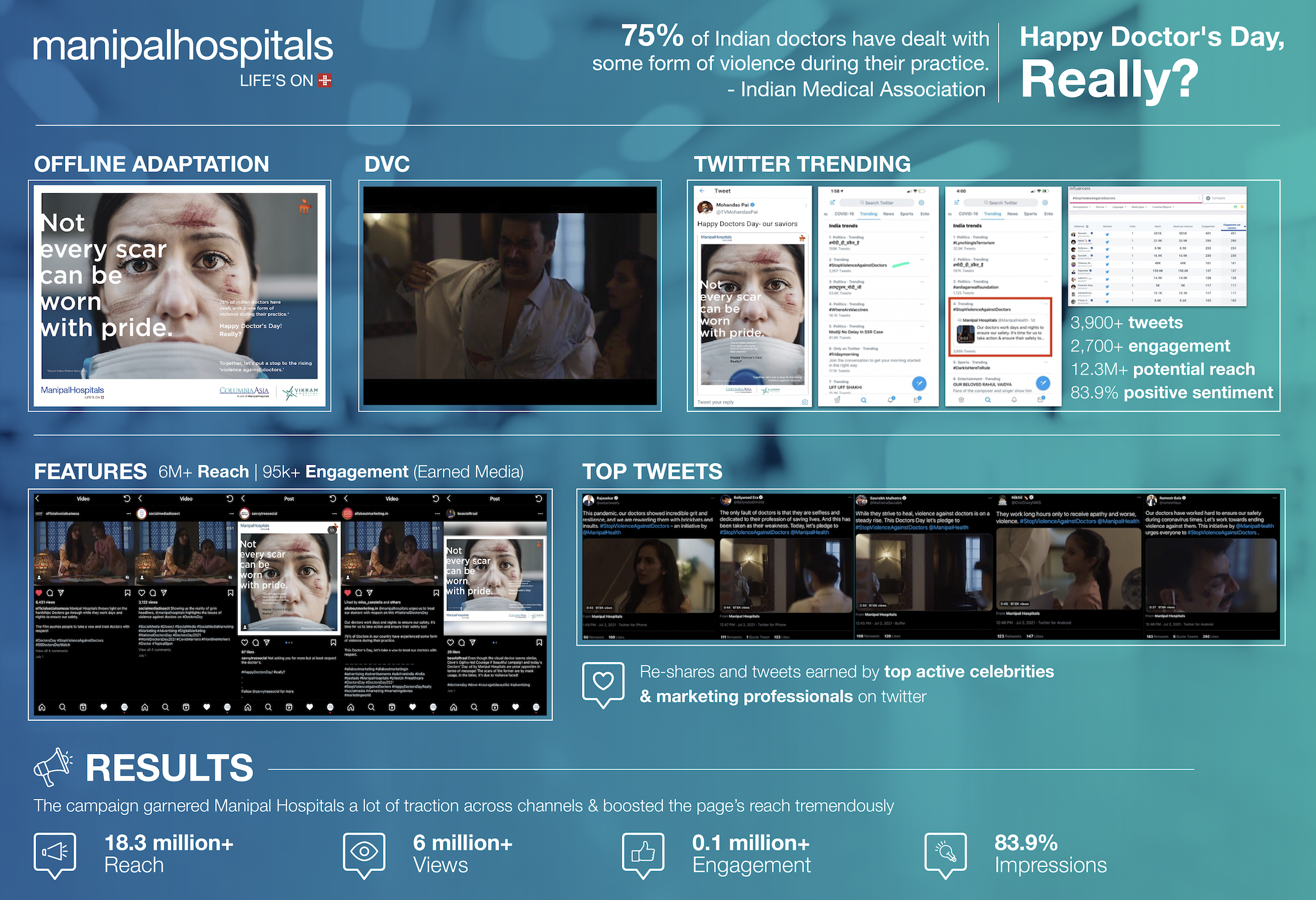 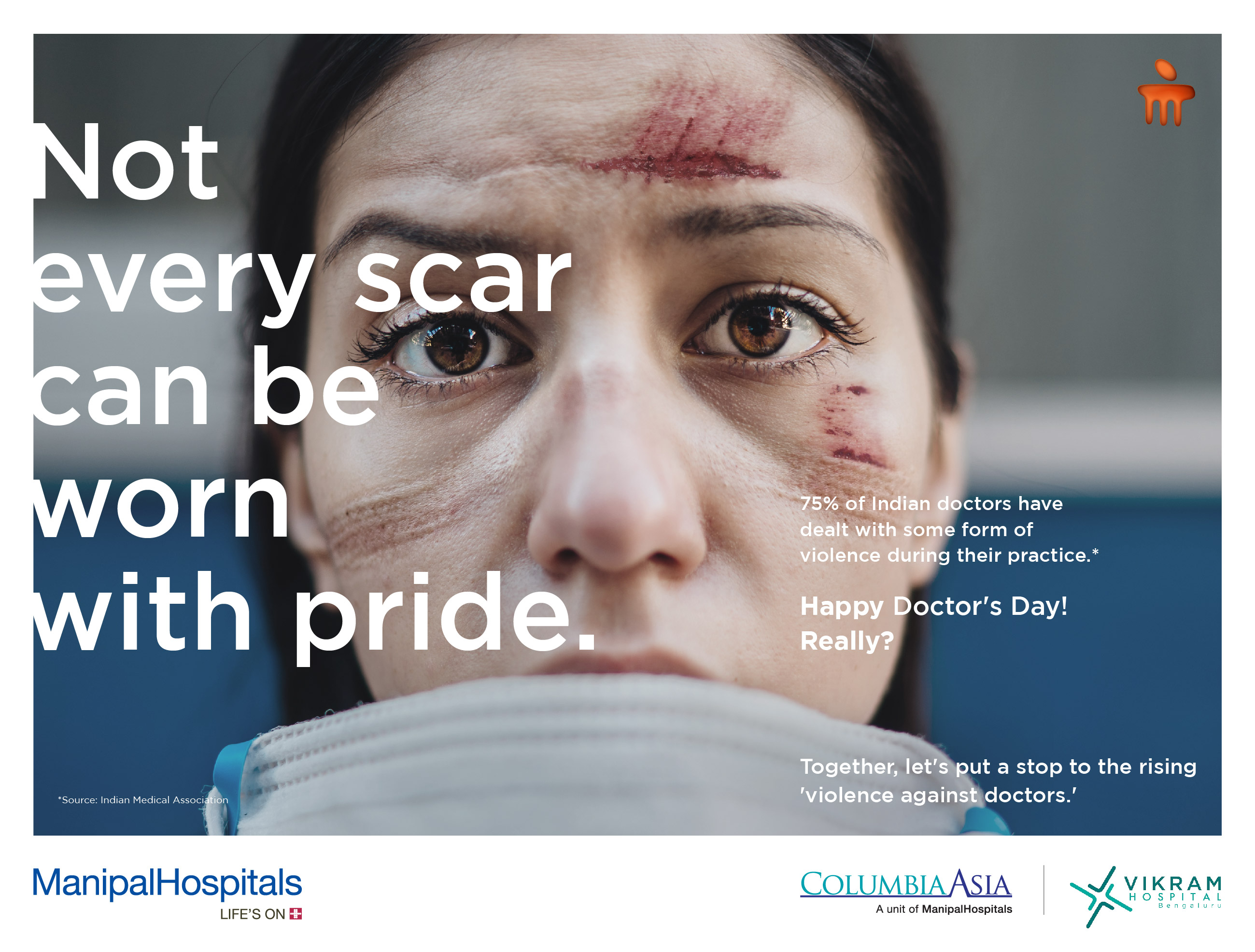