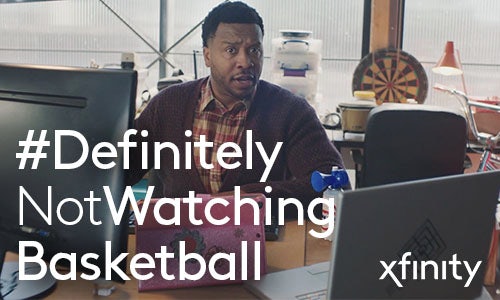 Every March, the NCAA’s Basketball Championships dominates our lives – we're watching the games in conference rooms at work, secretly on our phones and from jam packed sports bars.

For March Madness in 2021, things looked a lot different. We weren’t watching games with colleagues in the office nor heading out to the bars. This year, we all tuned in safely from our homes.

Xfinity, one of the nation’s largest internet providers, needed a way to insert themselves into the conversation, especially since their biggest competitor AT&T was an NCAA Corporate Champion. This gave AT&T full ownership of the telecom space during the month.

Throughout 2021, connectivity was more important than ever. Adding to this importance was March Madness, which was the perfect opportunity to introduce Xfinity xFi, their latest service that provides fast, reliable connections on all screens, while connecting fans to NCAA content.

Xfinity found a creative, effective way to hijack the conversation during this season’s madness - by telling the story of what everyone is “not doing” during the workday. #DefinitelyNotWatchingBasketball

March Madness is the NCAA's Basketball Championship, when the entire season culminates in a 68 team, 67 game, 3-week tournament that brings together diehards and casual sports fans who are glued to their devices for weeks watching upsets, buzzer beaters, and bracket busters.

In 2019, fans watched up to 6 hours of the tournament content during work, and in 2021, 65% of people were secretly streaming content on multiple screens during the workday.

At this time, everyone was working from home – from parents to students – multi-screening and hogging up bandwidth. Despite this, 65% of Americans don’t have internet fast enough to handle video calls!

With games starting as early as noon on weekdays and up to 5 games playing at one time, March Madness in 2021 was the true test of an 8-hour workday.

We wanted to lean into the experience of trying to watch basketball while you are also supposed to be on a conference call. With fans and family members at home taxing their internet to the limit, we knew that every screen in every household wouldn’t be receiving great service. So, we highlighted a new reality for them with Xfinity xFi - a reality where they could watch games on those second, third, and fourth screens without hiccups, lag or delay.

To hijack the conversation from our competitors and share the benefits of Xfinity xFi, we reached fans through contextually relevant social media, partners and influencer amplification.

We partnered with three leading NCAA coaches – Mark Few, Kara Lawson, and Mitch Henderson – who gave “pep talks” to fans, getting them pumped for watching basketball on all their devices. They were coaching you on how to be #DefinitelyNotWatchingBasketball.

We interacted with fans in real-time with Reddit and Snapchat ESPN takeovers. We also amplified our content through an ESPN Twitter sponsorship with #DefinitelyNotWatchingBasketball content airing around ESPN and SportsCenter live shows – the perfect time to make fans realize they could have better streaming service!

Xfinity talent, partners and college ambassadors including Gritty and Jazz Bear created original comedic posts that were shared on Instagram and Twitter.

Through the three weeks of March Madness, #DefinitelyNotWatchingBasketball dominated fans’ social channels with plenty of content for them to share and interact with.

While the top advertisers typically spend about $30 million on national TV during March Madness*, we put the majority of our focus and spend on social media and it paid off.

By only using a tenth of what our competitors spend, Xfinity xFi became a clear leader in the space for fast-reliable internet as:

#DefinitelyNotWatchingBasketball was relatable, and got the attention of fans with: 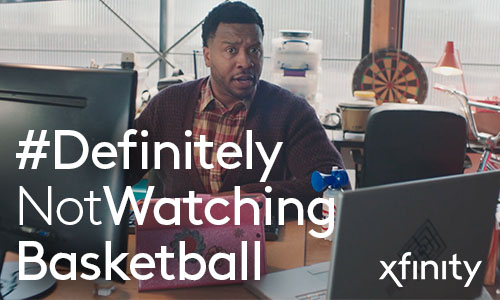