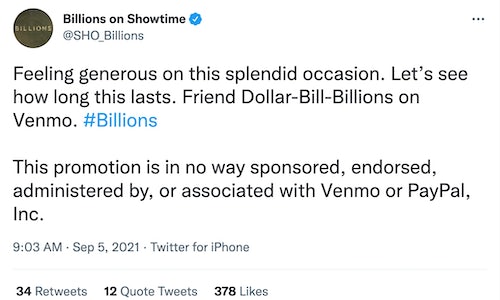 It Pays To Be Friends With Showtime

After a 504 day hiatus, the hotly anticipated Season 5 Part 2 of Billions was returning to Showtime. Marketing, advertising and PR plans were underway. Could anything more be added to drive conversations on premiere night?

A few weeks before Season 5 Part 2’s debut, a new social team was challenged to come up with a premiere day idea to add more momentum to the Billions conversation. The goals: reward loyal viewers (who had been waiting 1 ½ years), and get Billions trending on premiere night in order to drive tune-in.

Within two weeks, a conversation-generating idea was created, then reimagined when the platform gatekeepers initially said no. A single post on the morning of the premiere began a trending avalanche.

The characters in Billions know about swagger, bold moves, and the power of money. We took inspiration from Billions, asking how they drive a news cycle and quickly realized the answer — by paying for it. We wanted to drive conversation, get trending, and reinforce the urgency of premiere night, by proving that it pays to be friends with Billionaires.

We would pay out $5,000 to fans via Venmo. By sending money to some new friends of Billions. We tried the official channels and due to legal hoops and timing found out we couldn’t get a new business Venmo account in time. So we got scrappy.

A few days before the premiere, we created a regular user Venmo account for Showtime, with the fan-recognizable-name Dollar-Bill-Billions and loaded it with $5,000. We created a single tweet for Billions fans to be posted by @SHO_Billions. At 9am on premiere day, Showtime’s Billions pinned this tweet, telling folks to hit up Dollar Bill on Venmo. And then avarice took over. Throughout the day, we manually confirmed 1300 individual new friend requests. Many of these new friends played along with ambitious requests of their own — like asking us for $10 million. Hey, gotta try, right? One pinned tweet, that’s all it took to start the avalanche, house all #Billions mentions in one place, and drive to another platform to take action.

When the premiere episode began, we doled out the cash by paying a random selection of 50 Venmo friends $100 each. Then the wildfire spread. Recipients took to Twitter sharing screenshots of their payout, their friends liked and commented on the public Venmo feed updates, and Billions actor Kelly AuCoin, who plays Dollar Bill, engaged with fans directly for fun.

Overall the campaign generated 1M total impressions and helped support a wildly successful premiere night for the return of Season 5 of Billions, with #Billions trending on Twitter within the first seven minutes of the start of the premiere — all propelled by one pinned tweet. Friendship really does pay.

Video for It Pays To Be Friends With Showtime 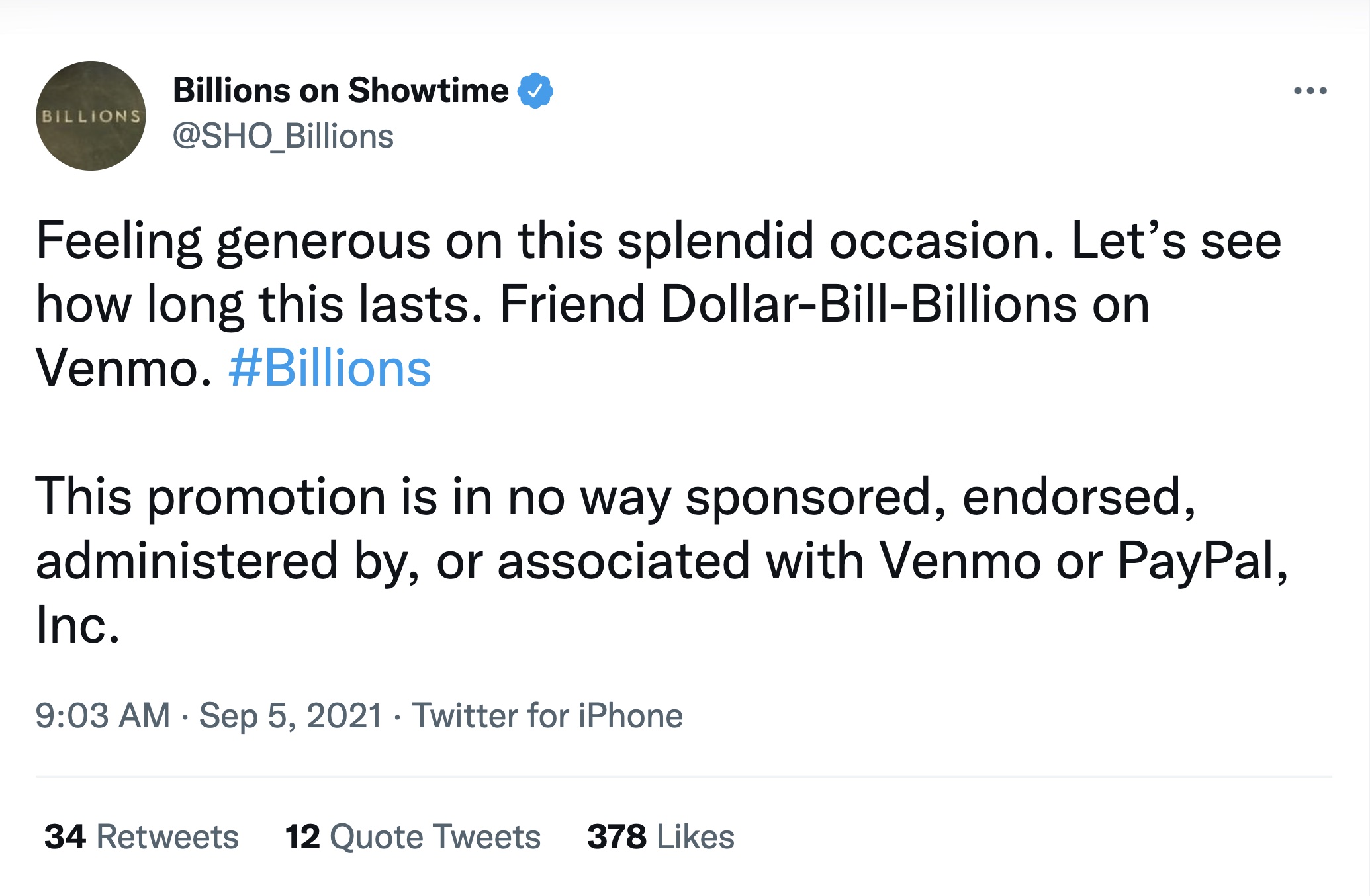