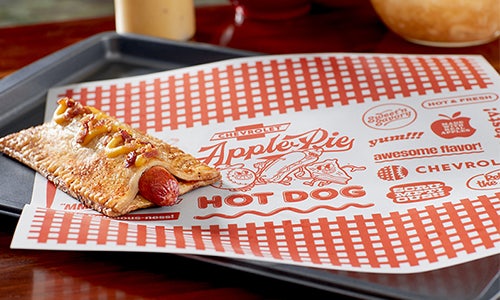 Chevrolet has been the official vehicle of Major League Baseball (MLB) since 2005 and its ties to the game go back much further. In 2021, MLB was planning to do something they’ve never done before – put on a special, showcase game. They dubbed it the MLB at Field of Dreams game as a nod to the 1989 movie starring Kevin Costner. The game would take place in Iowa between the Yankees and White Sox.

With the world beginning to open up again and the massive consumer interest in what Ad Age calls “nostalgia marketing,” we saw an opportunity to break the traditional media routine and do something buzzworthy.

If there’s any phrase that exemplifies American culture, it’s the iconic jingle, “Baseball, hot dogs, apple pie and Chevrolet.” That 1970s Chevy television campaign was and is beloved

by many. It was named the best automobile commercial of all-time by Car and Driver.

Baseball is “America’s pastime” and hot dogs have been a staple at baseball stadiums since 1893. Americans eat more than 23 million hot dogs each year in MLB stadiums. About 36 million Americans say apple pie is their favorite flavor to enjoy at backyard barbecues and Thanksgiving. Which makes sense since the U.S. is one of the world’s largest apple producers.

Chevy’s ties to America’s pastime sparked an interesting, and appetizing, idea. We brought Chevy’s beloved jingle “Baseball, hot dogs, apple pie and Chevrolet” to life by creating the first-ever Apple Pie Hot Dog and offering it exclusively at the MLB at Field of Dreams game.

Bringing two unexpected dishes together – apple pie and hot dogs – is no simple feat. We needed someone with a flair for food mashups and knew there was only one Guy for the job:

With the growing popularity of “Food TikTok,” we decided to launch a how-to recipe video featuring Guy. This would make the Apple Pie Hot Dog accessible to all.

This tasty treat is deeply rooted in the Chevy brand due to the “Baseball, hot dogs, apple pie and Chevrolet” jingle. No other brand could do it.

But in order for our audience to understand our big idea, we had to introduce it to them in a way that was easy to digest and would resonate with a generation that had never heard of the jingle…until now.

The campaign had a week-long content cadence that kept the conversation going around food and sports across a variety of digital, social, and traditional media channels. Guy Fieri brought his authentic energy and love for Chevy to everything we did, from our social content to the many interviews he fielded about this collaboration with Chevy. It required a carefully orchestrated, integrated approach.

We kicked it off with a soft launch teaser video with Guy Fieri having a vision while washing his car. Two days later, we released an animated video with updated versions of the iconic jingle and characters. Then we revealed our recipe video with Guy Fieri teaching the world how to make the Apple Pie Hot Dog. And for the ultimate Throwback Thursday, The grand finale: Field of Dreams Game. All content led to this main event where Chevy treated attendees to Apple Pie Hot Dogs.

We got people talking…often with their mouths full.

One recipe, one week and one billion media impressions. The Apple Pie Hot Dog story was covered by ABC World News Now, CBS This Morning, Fox News, E! News, Insider, CNN, USA Today Sports, Barstool Sports, Bleacher Report, MLB Network and local news stations around the country from Maine to Hawaii. Not to mention Australia, Germany and elsewhere. The Late Show with Stephen Colbert and TMZ both did long, hilarious segments on what many cheekily dubbed “the most American thing ever.” The MLB at Field of Dreams game was the most-watched regular season baseball game on any network in 16 years. During the broadcast, announcers Joe Buck and John Smoltz had a lengthy discussion about Apple Pie Hot Dogs with the Field of Dreams star himself, Kevin Costner.

We knocked it out of the park on social media with 143 million social impressions. More specifically, on TikTok, it received 30 million views, one million reactions and 14,500 shares. Proving that even younger generations found this edible as our typical Chevy audience. 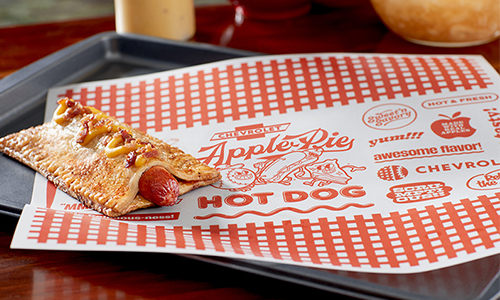 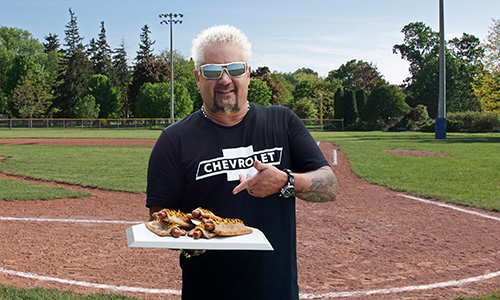