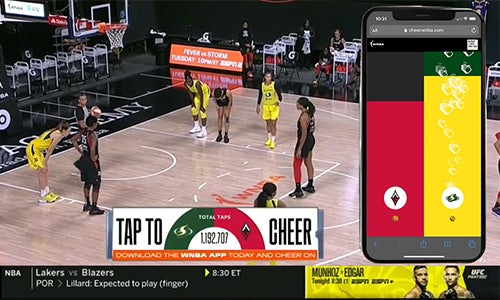 From the powerful cheers in the arenas to the tense at-home watch parties, basketball fans go above and beyond to show their support for their favorite teams each season. However, this year, due to the global pandemic, we experienced a season unlike any other in basketball history that threatened the intersection between basketball players and fans everywhere. For health and safety precautions, the WNBA and NBA players played games in a fan-less ‘bubble’, creating a huge shift in the game environment, audience engagement and the incredibly important connection between teams, players, and their fans.

To overcome this shift and replicate the home court feel, the WNBA and NBA aimed to create an immersive virtual experience for at-home fans to tune in, enjoy the game and cheer on their teams from the safety of their homes…one tap at a time.

In addition to focusing on keeping fans engaged at home during games, the events that sparked outrage and protests across the globe during the ongoing pandemic could not be ignored. The WNBA dedicated their entire 2020 season to social justice, with its opening week centered around the #Black Lives Matter movement and the Say Her Name campaign founded by the African American Policy Forum. These efforts further amplified the collaborative efforts in advancing the WNBA’s goal of bringing awareness to social justice and impacting real change.

To tip off this unprecedented season, the WNBA and NBA turned to Telescope Inc. to power their real-time fan engagement and strategy to bring the fan’s normally in-person loud and passionate participation for the game from the home audiences tuning in. By leveraging Telescope’s play-along Passion Meter product and customizing it to mirror each league and team, the activation “Tap to Cheer” was born, enabling millions of at-home fans to simultaneously watch the highly anticipated games and easily cheer on their favorite team right from their sofas via the WNBA & NBA native apps.

Upon entering the ‘Tap to Cheer’ application, users were presented with a customized destination landing page created for each league with a schedule of the day’s games, both active and upcoming. Once engaged in the game of their choice, fans would be prompted to ‘tap’ on their favorite team’s logo to virtually cheer them on, releasing team emojis, logos or jerseys with each tap to visually exemplify their participation and add to the group fan effort. As fans continued to show support throughout the game, the taps collectively filled the teams’ bars and once it reached the top, fans received an animated pay-off involving confetti and a full screen team takeover in celebration! With each game, the audiences between the rival teams battled and tapped their way to the top to showcase which team’s fans showed up and showed out with the most support, creating a sense of real-time competitive fan rivalry.

The WNBA user experience was designed to increase new users and sustain engagement throughout the entire season. In order to do so, the WNBA launched the following features:

To combat potential product fatigue, the WNBA elevated their experience by additionally utilizing Telescope’s Triple Play product to engage fans post-game by powering an “MVP of the Game” poll, allowing fans to vote who they believed was the real MVP of the night while also incorporating a lead generation/data capture form to increase the WNBA fan base and first-party data collection.

The NBA took their cheering one step further by enabling fans via Twitter to tweet their team hashtag (i.e. #LakeShow) which additionally populated data into the ‘Tap to Cheer’ application and controlled in-stadium graphics, impacting visual effects within the arena. Furthermore, NBA fans could enter into a sweepstakes on the ‘Tap to Cheer’ application where lucky winners received the option to virtually sit courtside at an NBA game.

With the launch of the ‘Tap to Cheer’ application, both the WNBA and NBA were able to successfully engage their at-home audiences in a unique memorable way and enable fans to virtually cheer on their favorite teams, garnering hundreds of millions of ‘cheers’ over the leagues’ seasons.

Video for ‘Tap to Cheer’ for WNBA & NBA 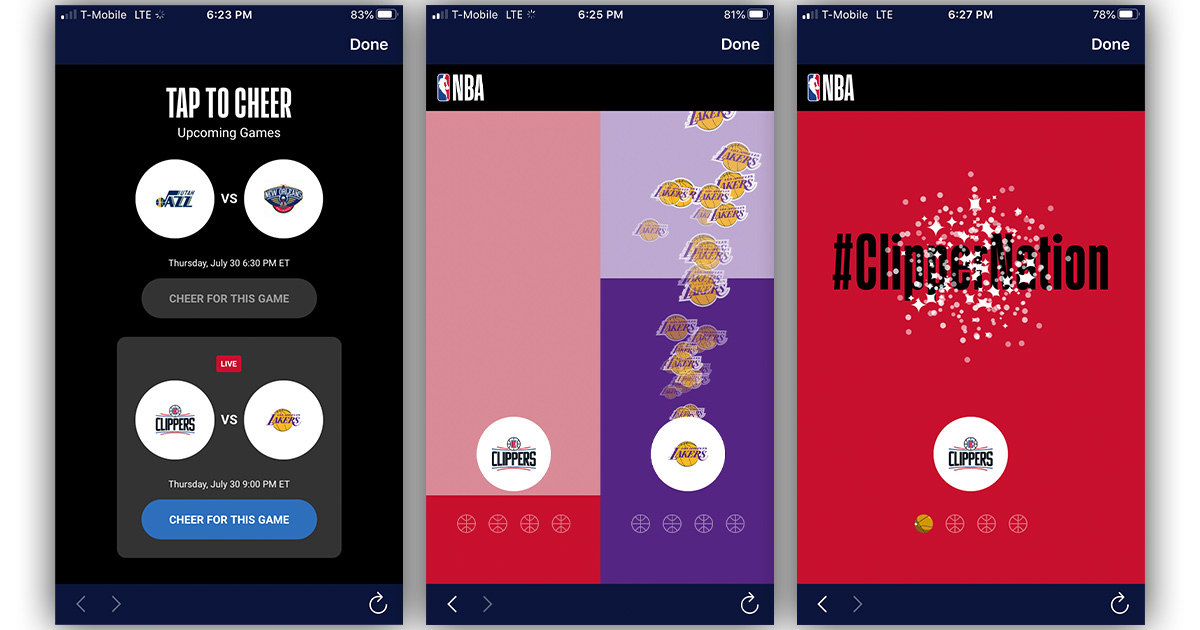 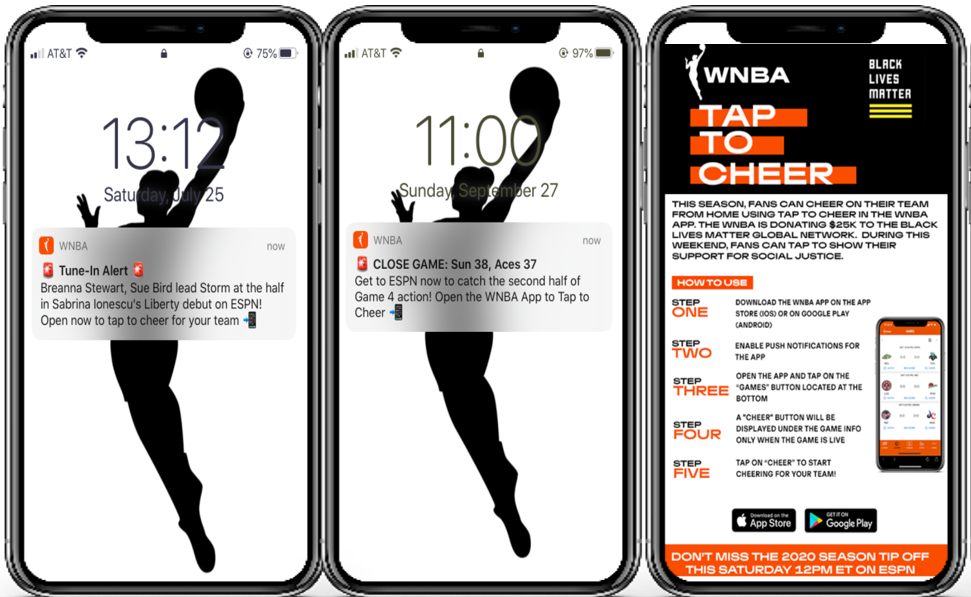 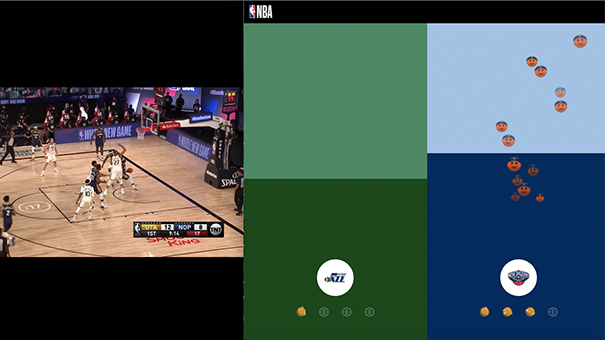 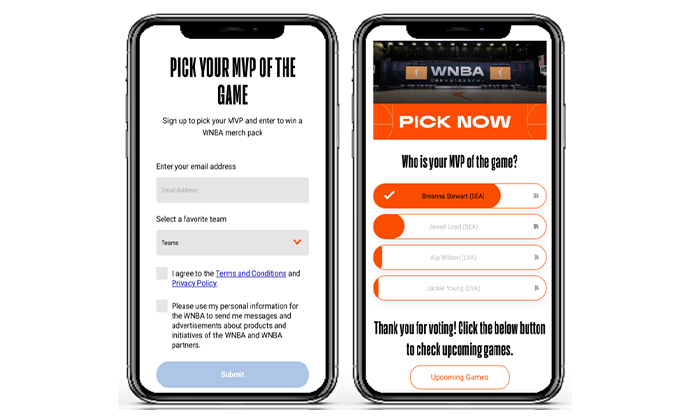 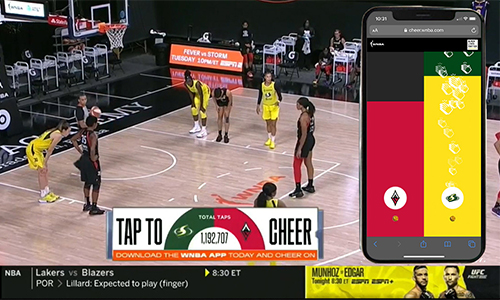