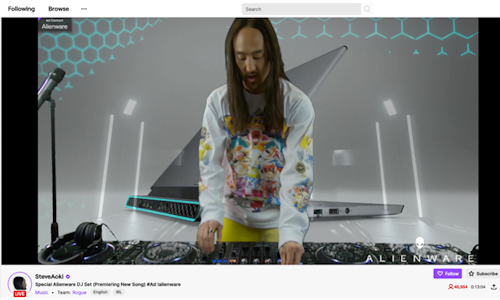 As an established brand among hardcore gamers, Dell’s Alienware wanted to expand their reach to a broader group. Dell wanted to convey the message that Alienware computers offer more than just elite gaming performance. They’re the force behind every expression of creativity, from music to podcasts to fashion to cooking to sports.  When you decide to dedicate your life to your pursuit, you need Alienware.

Alienware was not the only one expanding outside their endemic universe. Twitch, an interactive livestreaming service traditionally known for video game streams, was gaining popularity in non-gaming categories. In 2020 alone, Twitch users watched over 2 billion hours of non-gaming content on the site. Twitch’s music scene was particularly taking off and the Twitch’s music vertical was the fastest-growing category on Twitch in the first half of 2020, boosted by musicians who wished to reach fans while concert venues shuttered. By the end of 2020, music viewership on Twitch had grown 4x times to what it had been in previous year. Additionally, Twitch audience interests perfectly aligned for Alienware’s objective of expanding their product’s use case while also still engaging hardcore gamers as 80% of Twitch users use their PC/laptops for non-gaming activities and 40% of Twitch users own a PC or laptop dedicated to non-gaming activities (Twitch RPG Survey, June 2020).

With the perfect partner selected for their audience expansion objective, Alienware was ready to kick off the campaign.

Dell’s strategy for placing Alienware in front of a broader audience was to use Twitch to infiltrate influential communities that shared an interest in music and gaming.

Dell and Twitch worked with Steve Aoki to create “Always Smile”, a song specifically for Alienware. The song would premiere exclusively on Twitch as part of a series of 4x 1-hour livestreams dubbed “The Alienware Sessions”, which would chronicle Steve Aoki’s song making journey and demonstrate how Alienware products enabled his creative process.

The first two Alienware Sessions streams led up to the song release and offered a more intimate look at Aoki’s life while showing his affinity for Alienware PCs for both music and gaming needs. On the first stream, which aired on September 3rd, Steve Aoki took Twitch viewers on an exclusive tour of his famous “Playhouse”, where he showed off his one of a kind Alienware computer set-up, officially announced the partnership and hyped up the release of the Alienware single.  Steve Aoki went live again on October 8th for a second Alienware Sessions stream, where he made sushi with his mom and showed exclusive behind the scenes studio snippets of him working on the new Alienware song that was being produced on his Alienware computer.

Finally, on October 16th, Steve Aoki premiered the Alienware single by hosting a 1-hour live DJ set on his Twitch Channel. Twitch Chat turned into a virtual dance party as the track premiered and the third Alienware Sessions stream became the hottest concert in town.

The last Alienware Sessions stream occurred on October 22nd and Steve Aoki ended the series by reminding Twitch users of the brand’s gaming roots by livestreaming himself playing Call of Duty and recapping the partnership to viewers in Twitch chat.

By partnering with Steve Aoki and Twitch, Alienware was successfully able to drive brand perception in influential communities passionate about both gaming and music.

According to Twitch’s RPG Campaign study (Twitch’s proprietary opt-in panel who give feedback and insights about their brand experience), the expanded mainstream gamer audience was incredibly receptive to the brand’s messaging, and the campaign drove significant increases in perceptions that Alienware is “proven” (+21.8%), “elite and powerful” (+14.3%), and “premium” (+11.2%).

All Alienware Sessions streams performed significantly above Twitch benchmarks which allowed Alienware to appeal to Steve Aoki’s audience and the Twitch audience at scale.  The press picked up on the new Alienware anthem and the song premiere stream received positive coverage in both marketing and EDM trades.

Most importantly, the brand equity gained through The Alienware Sessions would live on even after the campaign wrapped as the custom track would now be officially licensed to Alienware and used in the brand’s future marketing programs. Now, every time users hear the song, they would be reminded off the power and performance of the Alienware machines… and a killer virtual dance party on Twitch.

Video for The Alienware Sessions 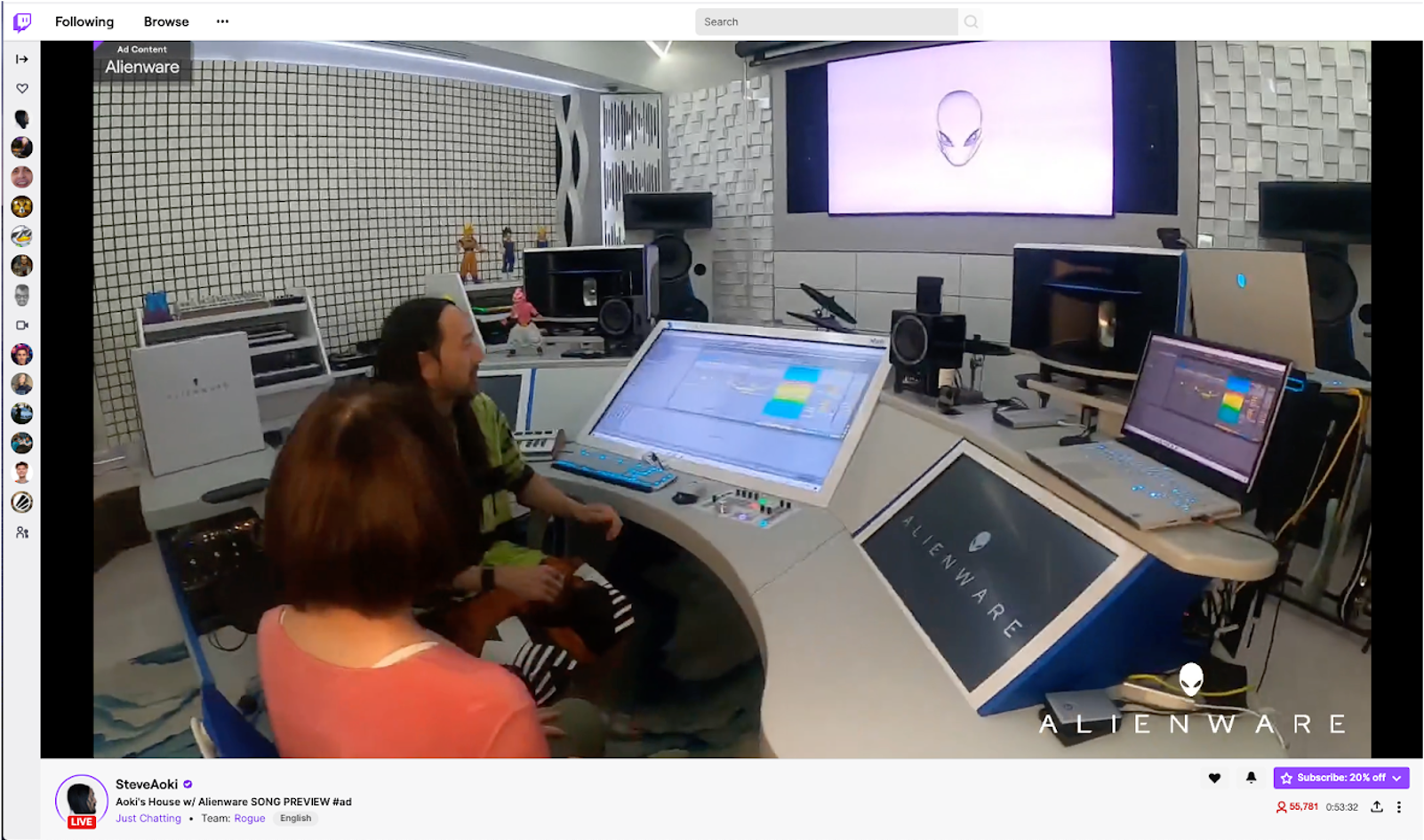 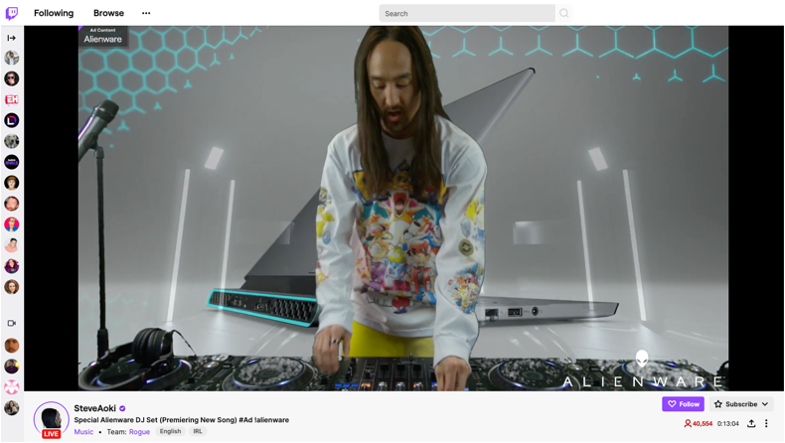