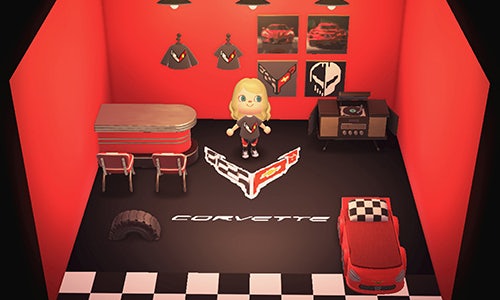 Rev Up Your Animal Crossing World

The launch of the Corvette Stingray was an event that generated buzz across the globe. To continue and expand that excitement during the initial COVID-19 pandemic we tapped into an emerging reality: That more and more people were playing video games during quarantine.

According to Nielsen, 55% of people picked up video games during that time. One of the most popular was Nintendo’s Animal Crossing: New Horizons which became the cultural touchstone of the moment — the first console game to reach 5 million digital sales within a month.

Animal Crossing became a phenomenon during the pandemic because it gave users the ability to have fun by safely interacting with real people in a virtual world. When Nintendo opened up their IP for fans and brands to engage, it was obvious that one of the world’s most iconic brands needed to be part of it and we jumped at the opportunity to make Corvette part of that sim world where they could interact in a new and unique way.

We developed a free pack of exclusive assets that allowed players to transform their Animal Crossing world to the ultimate Corvette-themed haven. Not only did we provide gear for their character, but we let them transform their homes with themed posters, a rug, and even a Corvette bed to sleep in when the virtual day was done.

This campaign was totally organic with fans being driven from Corvette’s Instagram and Twitter pages to Pinterest where they would use QR codes to download the elements to upgrade their Animal Crossing world. Users were then encouraged to post screen shots and videos and show off and share their upgraded worlds via social media and their gaming and tech boards.

We were the first and only automotive brand to engage with their fans this way. The campaign tapped into the unique zeitgeist of the moment — driven by Corvette fans and a host of media outlets who promoted it with positive coverage. Major automotive outlets led the way, with Motor Trend’s story setting the tone:

“Here's a question we've never asked ourselves before: What would happen if Chevrolet and Animal Crossing collaborated on Corvette-themed downloadable content? It might sound like a farce, but this question is officially answered, as Chevrolet just announced a Corvette-themed pack for the popular sim game, and it's actually pretty neat. The download is available right now, and it's free. So why not fly your Chevy flag? Virtually, of course.”

Tech media also jumped in with c|net asking: “Who doesn't need a Corvette Racing Jake logo poster for their Animal Crossing home?”  As The Drive added: “It’s a neat lil’ game, alright, and Chevy just made it better.”

The best result? Near universal praise from our online audience who posted their appreciation for a fun way to show off their fandom during trying times.

Video for Rev Up Your Animal Crossing World 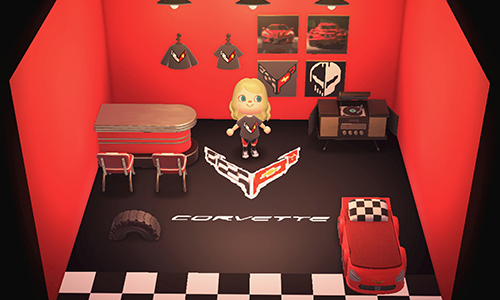