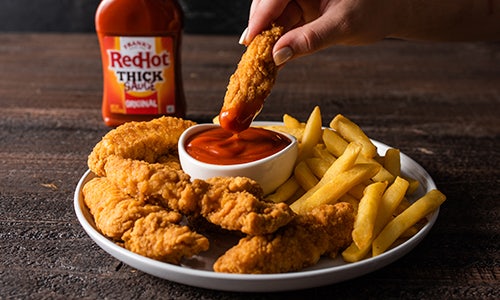 Football and game watching are big sales drivers of hot sauce in general, and Frank’s® RedHot® in particular. As America’s #1 hot sauce brand, Frank’s leads the category in sales, seeing boosts during football season that peak around Super Bowl.

To provide fans with an amazing kick-off experience, Frank’s RedHot teamed up with brand ambassador and retired New York Giants Quarterback Eli Manning to interact with fans just before his former team took the field against the Chicago Bears. Through an engaging Homegating experience live on Zoom & Twitter, fans were treated to a pre-game like no other with opportunities to speak directly to the four-time Pro Bowler and two-time Super Bowl MVP.

With 609,000 viewers, the brand used the moment to introduce a new line extension, Frank’s RedHot Thick Sauce - which brings the perfect blend of flavor, heat AND thickness to the original “Put that $#!t on everything” sauce enjoyed for over 100 years.

Surprise guests dropped in during the livestream, including former New York Giants Receiver Victor Cruz and Model Chanel Iman. They chatted with Eli and shared their favorite dippable gameday snacks while demonstrating unique versions of our Frank’s RedHot #DippingDance for a dedicated audience.

Following the Homegating experience, Frank’s RedHot Thick Sauce was further amplified through a standalone moment. Talent and influencers were deployed to share their unique interpretations of a #DippingDance, through short-form videos posted on the recently released Instagram Reels. They raised awareness and drove purchase intent for this new product.

To successfully execute and optimize awareness for Frank’s RedHot Thick Sauce, the brand created a digital activation with the support of talent and influencers that appealed to a Gen Z – Millennial audience. The ask was that they create and share a personalized “Touchdown Dipping Dance” for Instagram - imitating the excitement of professional football players’ endzone dances and ending their celebrations by enthusiastically dipping snackables into their favorite Frank’s Thick Sauce.

Frank’s RedHot had recently joined Tik Tok and was looking for ways to grow their presence. The platform was delivering strong organic engagement through the Summer and with people who continue to turn to it for a more face-forwarded connection while socially distancing throughout the global pandemic.

Ultimately, Instagram was selected as the preferred platform. It is where the Frank’s RedHot fanbase most engages with the brand, and the timely rollout of Instagram Reels was quickly recognized as an excellent tool to achieve a Tik Tok feel – where each participant takes a simple concept and interprets it in a way that is true to them.

Talent was intentionally given minimal instruction. Interpretation of the brief was left open because all content was being shared from their respective accounts and it needed to resonate with their audiences to drive engagement. They were provided with product to feature, and uniform audio to tie the overall campaign together. Other than that, the #DippingDance instructions were simple - be authentic in your unique interpretation and end your celebration by enthusiastically dipping snacks into your favorite Frank’s RedHot Thick Sauce.

Also, Frank’s RedHot represents irreverence. This is a brand that does not want to settle for boring, when there are shortcuts to exciting. The North Star of the Frank’s RedHot social strategy, is to “Kick it up a notch!”

Their love for football did not have to run deep, nor did they need to be professional dancers. What was important was their connection to their own fanbase and all that is tailgating – food, family, friends, fun, and FRANK’S!

Activating content that integrates key audience interests and intersects with cultural moments allowed for timely and engaging content. Because the Instagram Reels product was so new, it was most of our influencers’ first time using the product, and they showed up for their fans in a new space for Frank’s RedHot. As a result, we noted a high lift in engagement that succeeded the rate at which in-feed posts normally perform.

Together, the #DippingDance talent drove 4.92 million impressions and 251,000 engagements on Instagram during the campaign. The average engagement rate was 6.5%.

Additionally, Derek Hough’s participation in the #DippingDance was pitched to media. Resulting digital articles from Us Weekly, New York Post, MSN and Page Six, with mentions of the activation delivered over 89 million impressions.

Fan comments were very positive, with many echoing our “I put that $#!t on everything!”, brand slogan back to us. Their statements were largely around awareness, a desire to try, and purchase intent. Some also referenced dancing when they enjoy their food, which was spot on to our execution! 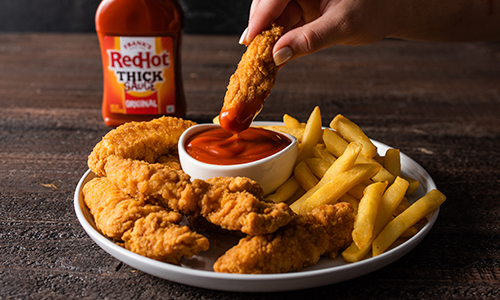