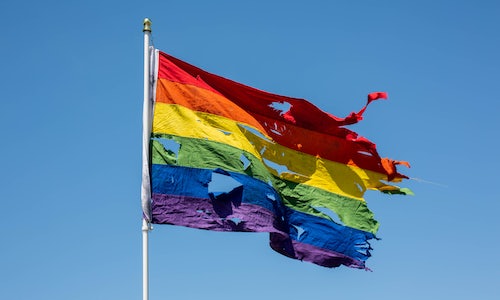 The Thrown Out Flag

The Rainbow Flag has been the symbol of pride for LGBTQ people everywhere. And it’s been embraced by the world with great fanfare. But not everyone is celebrating. 40% of homeless teens in the US who come out of the closet are thrown out onto the streets by their parents.

Our charge was to communicate the real truth. That we’re not there yet with compassion and love. That a growing public health crisis within this segment of our nation’s youth has gone unaddressed.

To do this, we needed a powerful symbol and authentic messaging to compel the thousands of homeless LGBTQ teens, aged 15-19, living on the street of NYC to take action.

Unite them in solidarity. Drive them to seek housing, counseling and healthcare through an online repository called Out Not Down. Ignite participation of community centers and medical professionals. And push back on prejudices within the public arena.

We created The Thrown Out Flag. Made of discarded scraps of fabric and designed with the traditional rainbow colors, it represents the struggle, conviction and solidarity of LGBTQ homeless youth.

With each stain and tater, the flag symbolizes the determination of being true to yourself no matter what the price. And builds upon the insight that only through acknowledging suffering can we rise up to take on life’s challenges.

Not falling prey to ubiquitous imagery, the campaign of outdoor, social, online and film embodies the boldness of the teens themselves.

Providing direction to those castoff and bewildered. Giving hope that even though they’ve been thrown out, they will pick themselves back up again.

In just a few short months, the flag established a powerful symbol of awareness, interest and connection. Challenging prejudices and initiating discussions around LGBTQ homelessness, our campaign produced significant results:

From January 2019 through April 2019, the poster campaign utilized outdoor media channels that created the following impressions:

As of mid-April 2019, we saw the following substantial increases:

With more than $1.5 million dollars donated in media space, design support, creative resources and tools, the campaign for Out Not Down has emerged from its roots in New York City with plans to spread out to other cities including San Francisco, Boston, Chicago and Austin.

Video for The Thrown Out Flag 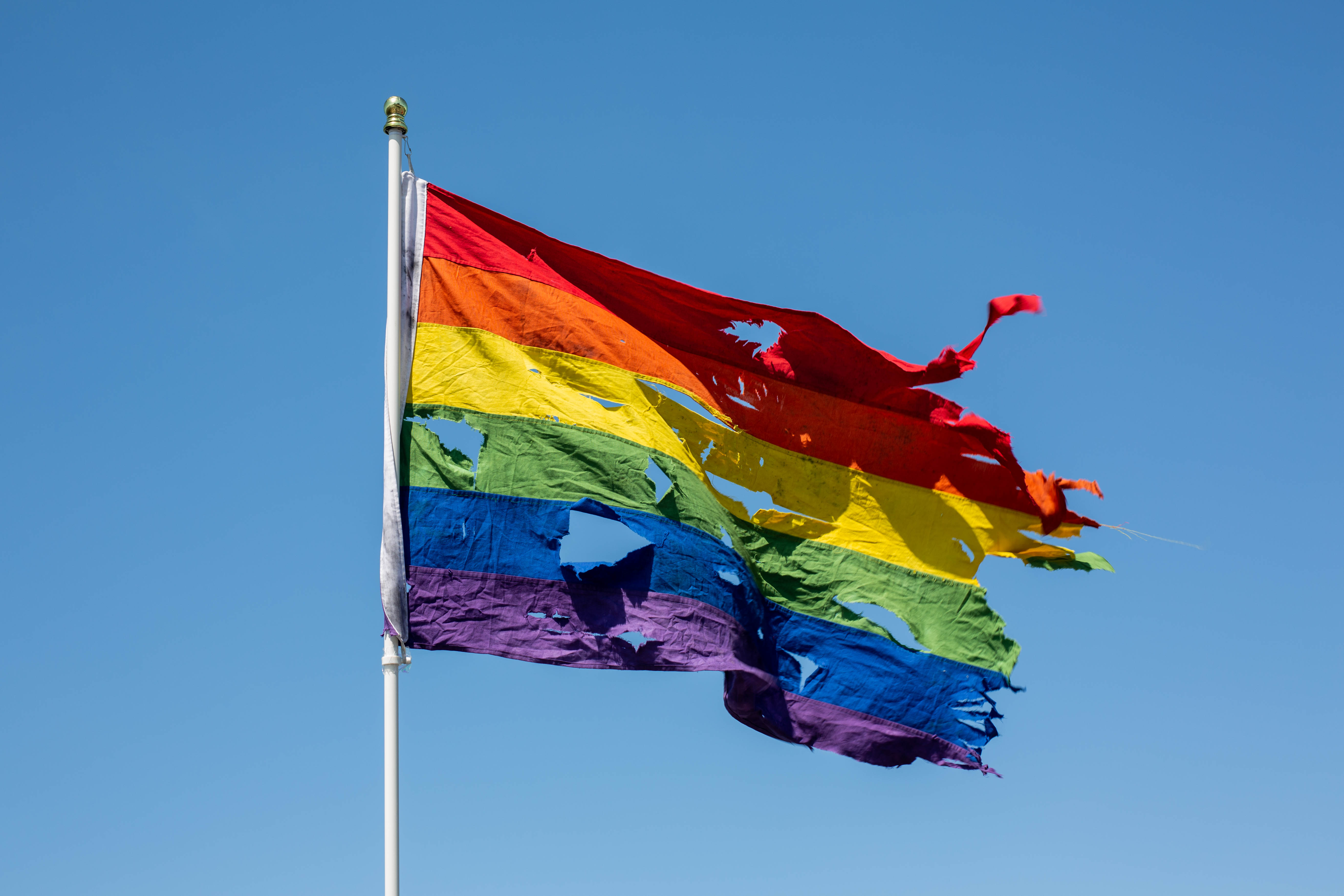 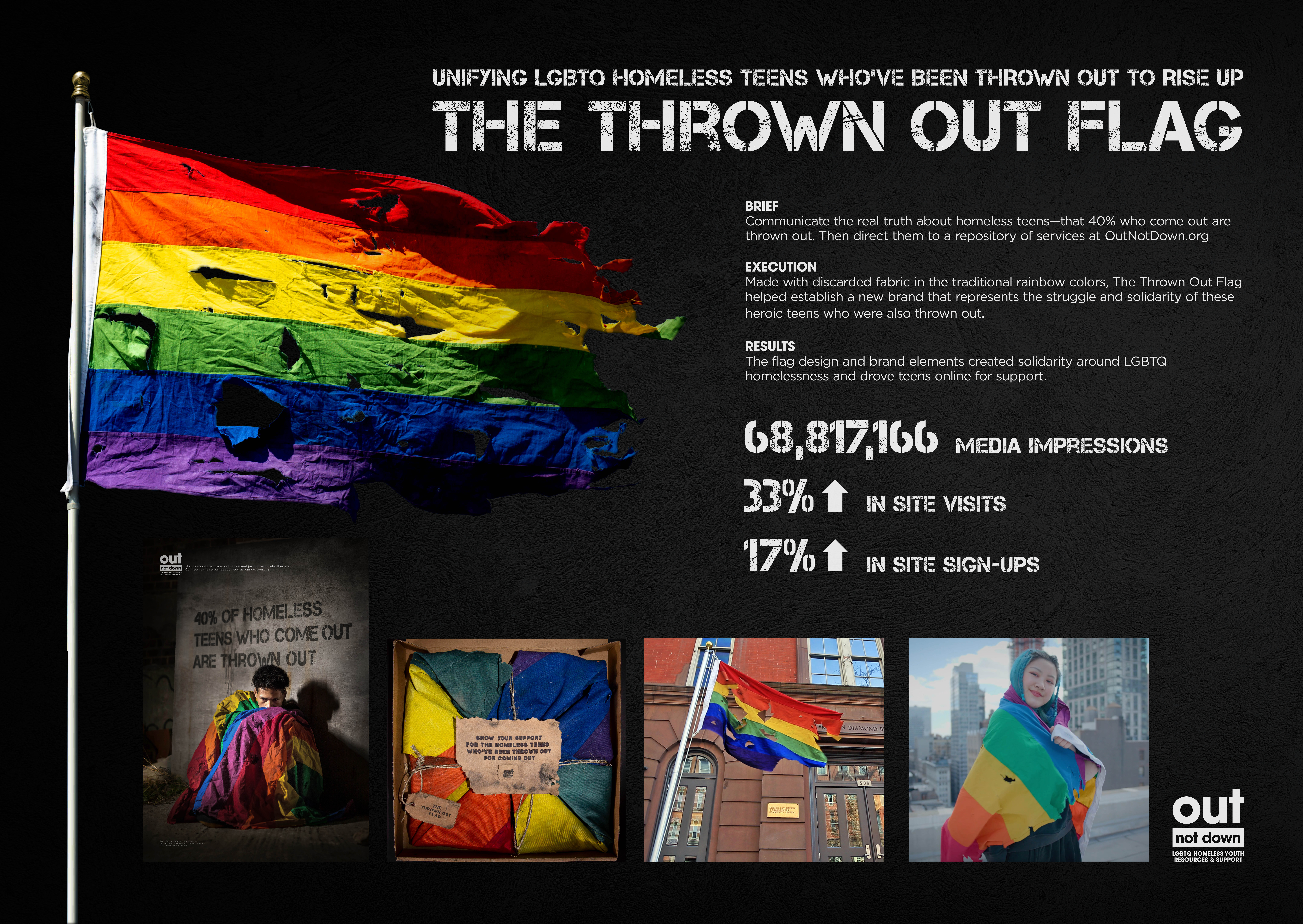 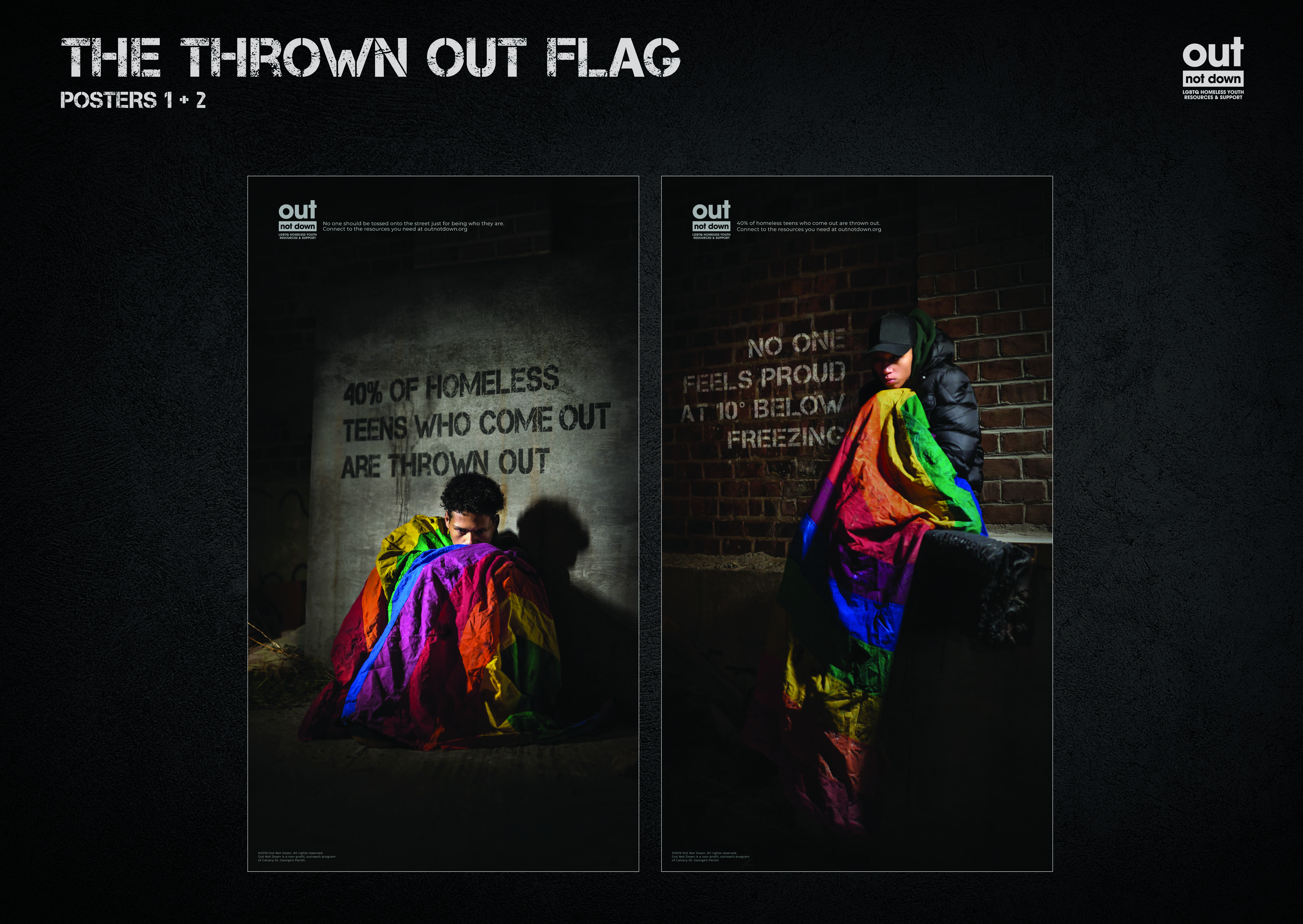 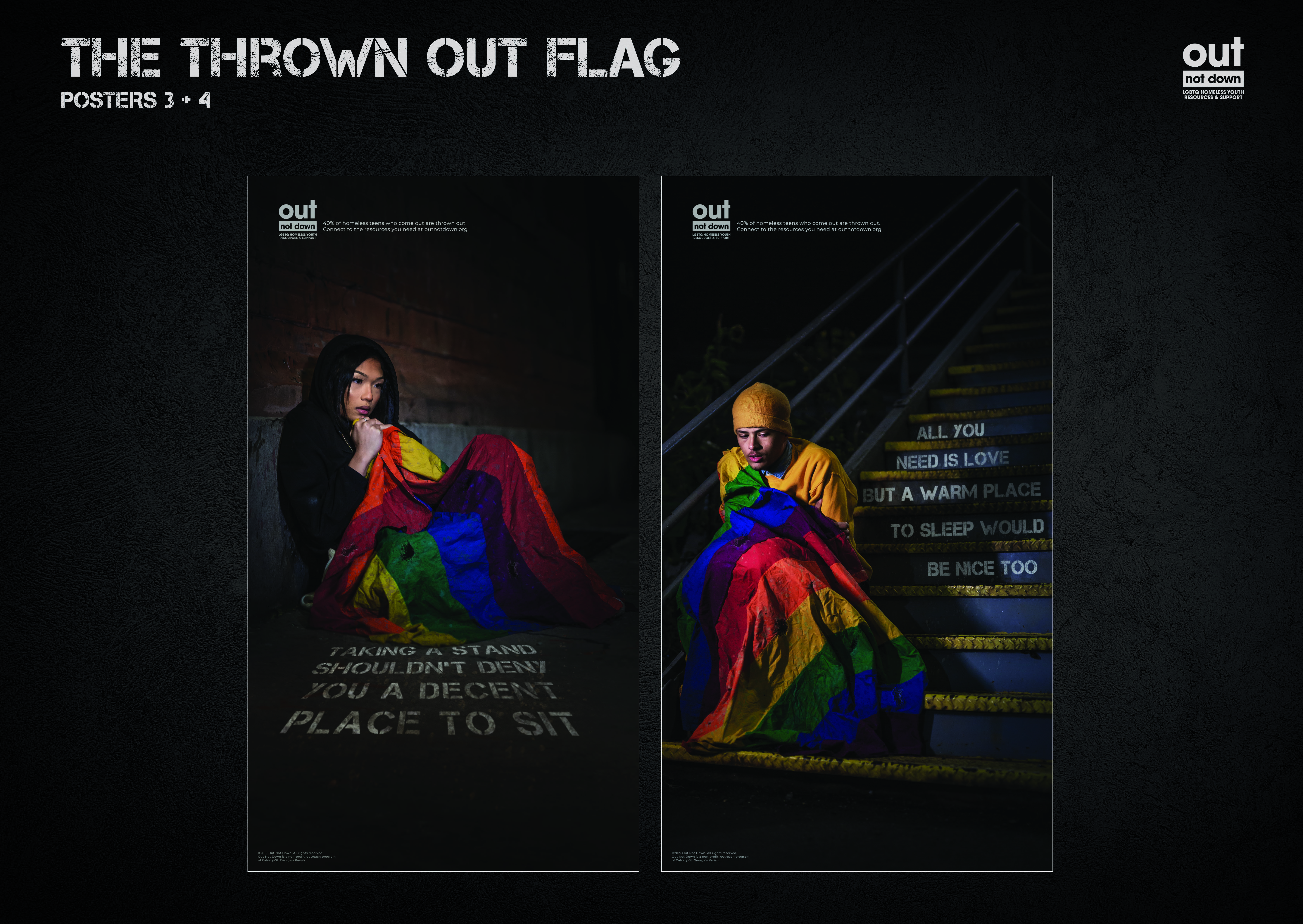 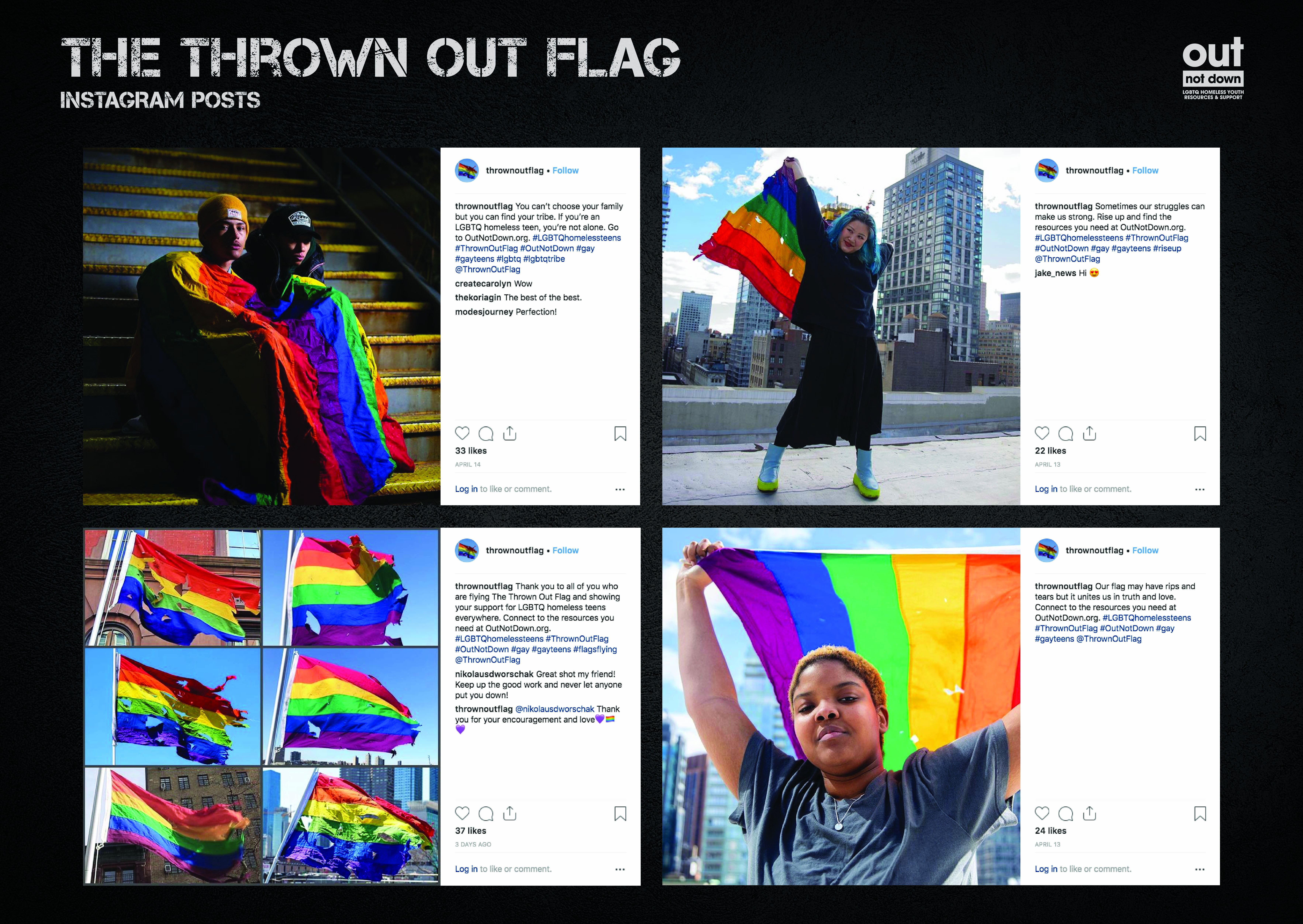 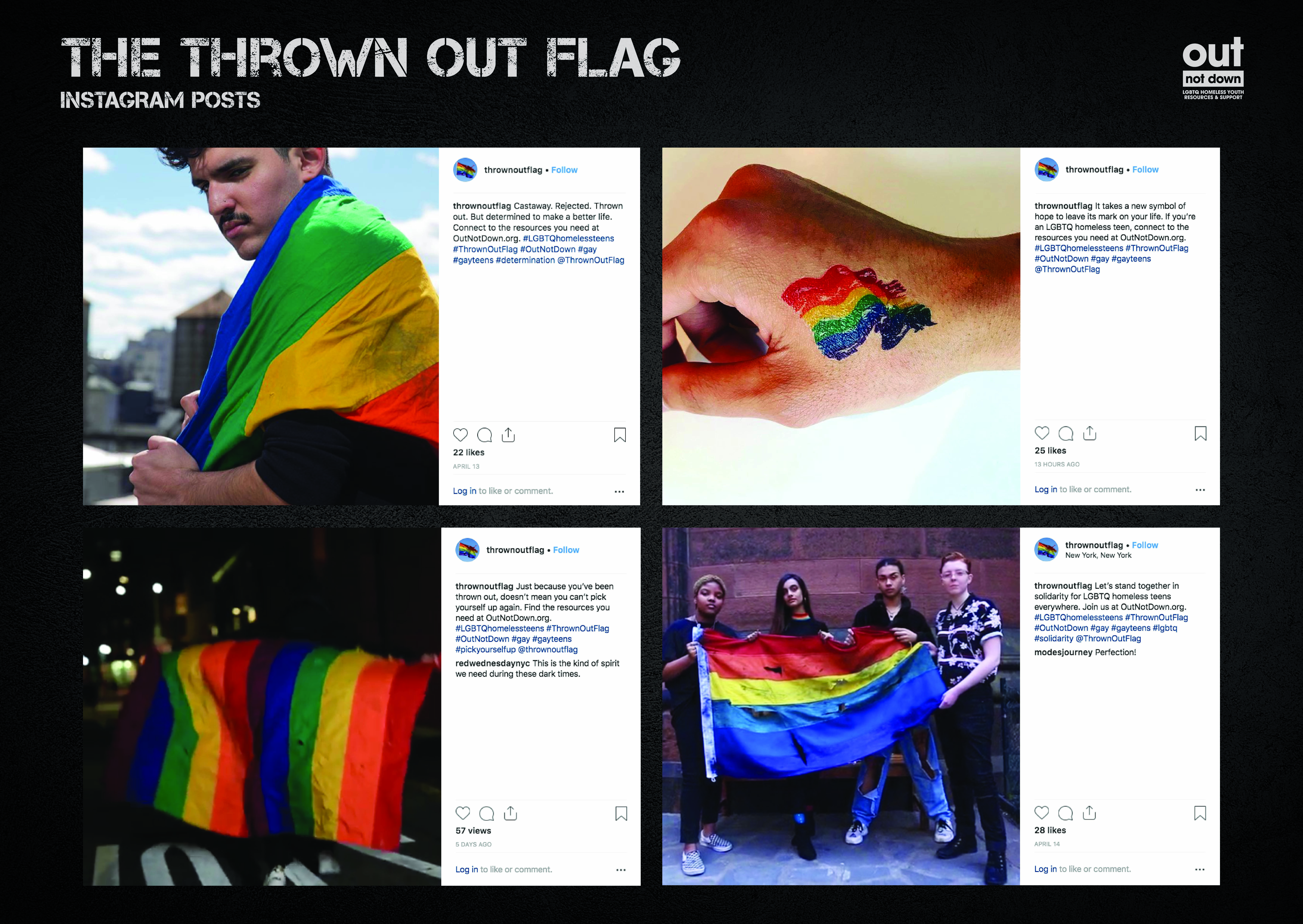 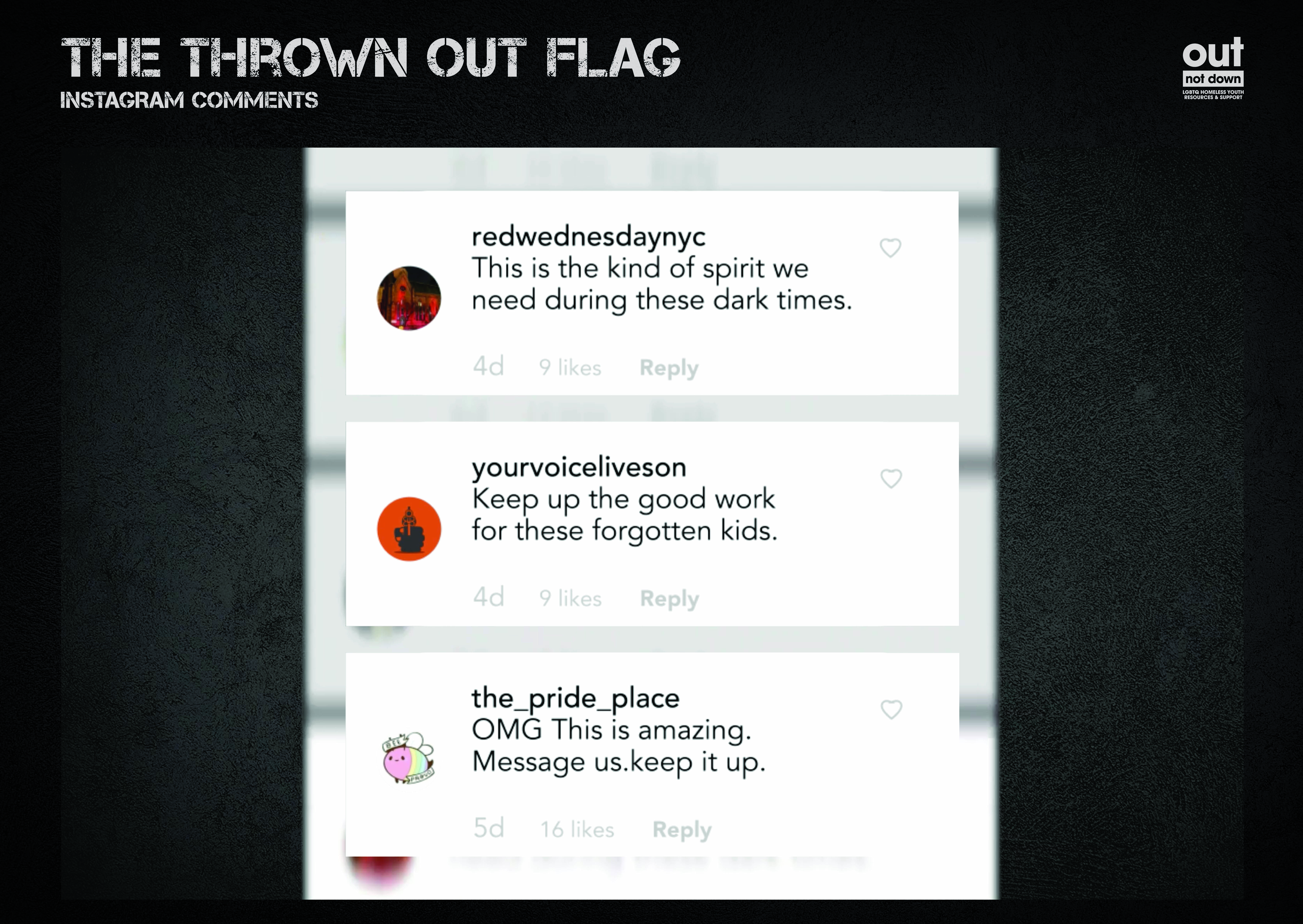 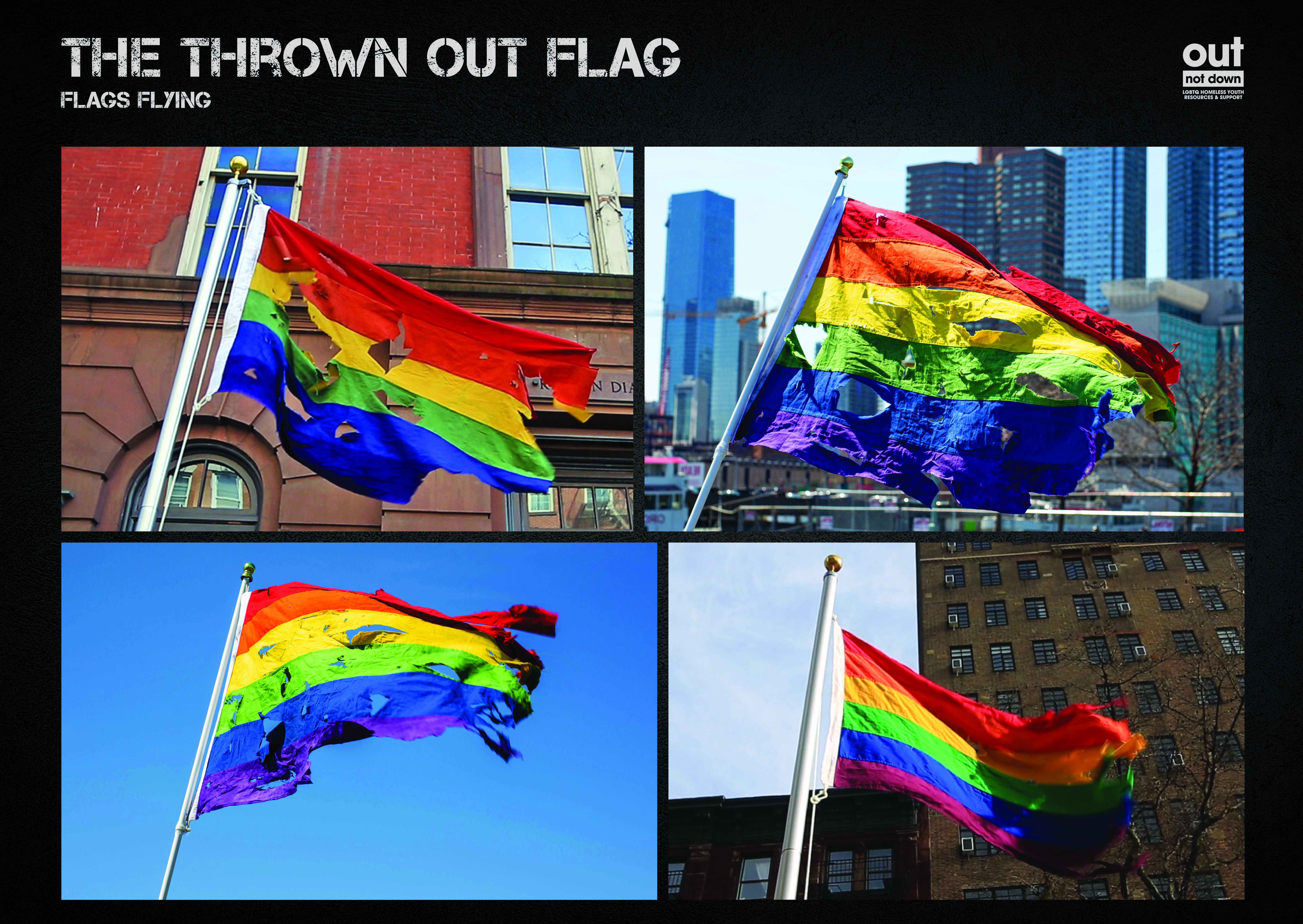 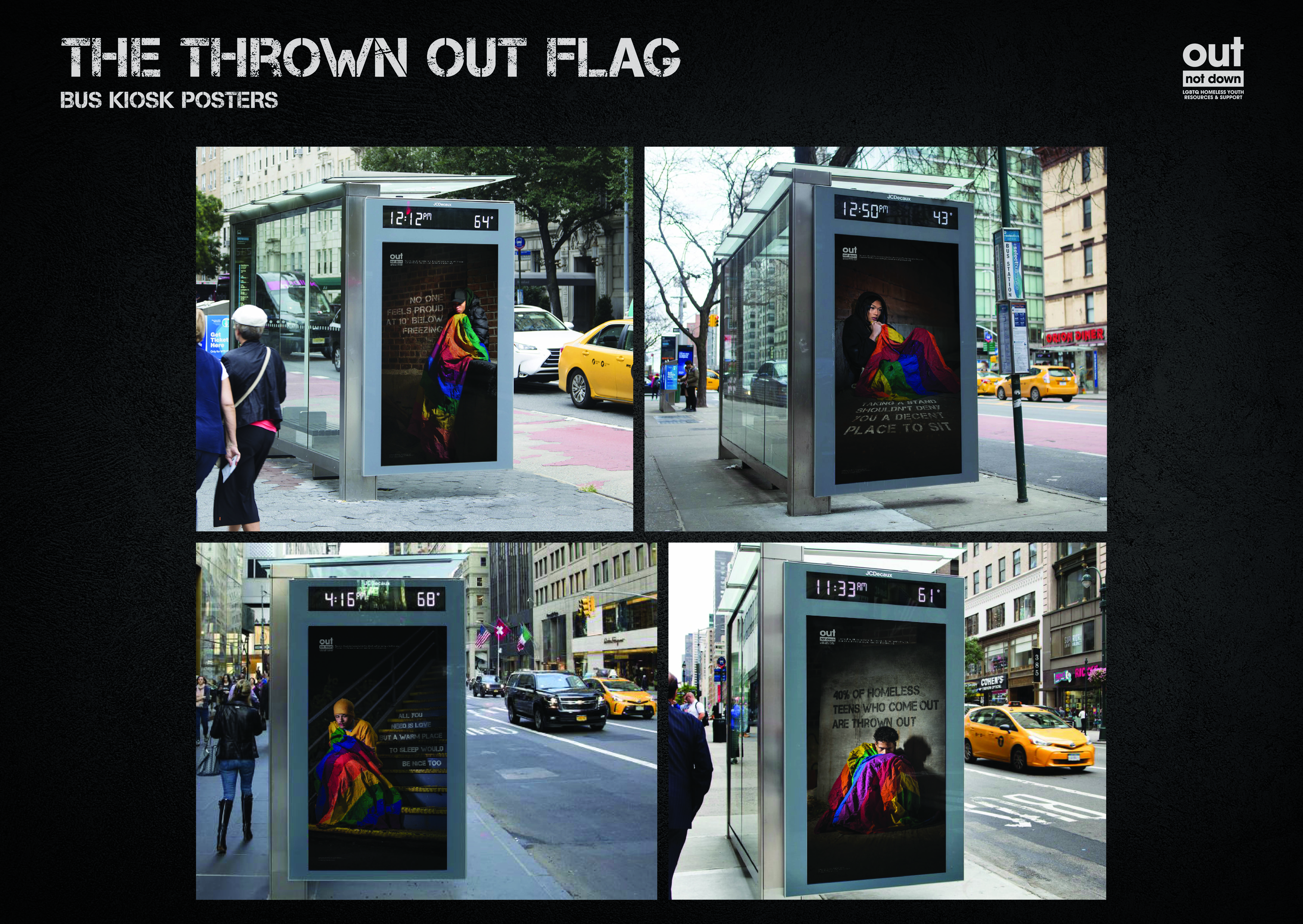 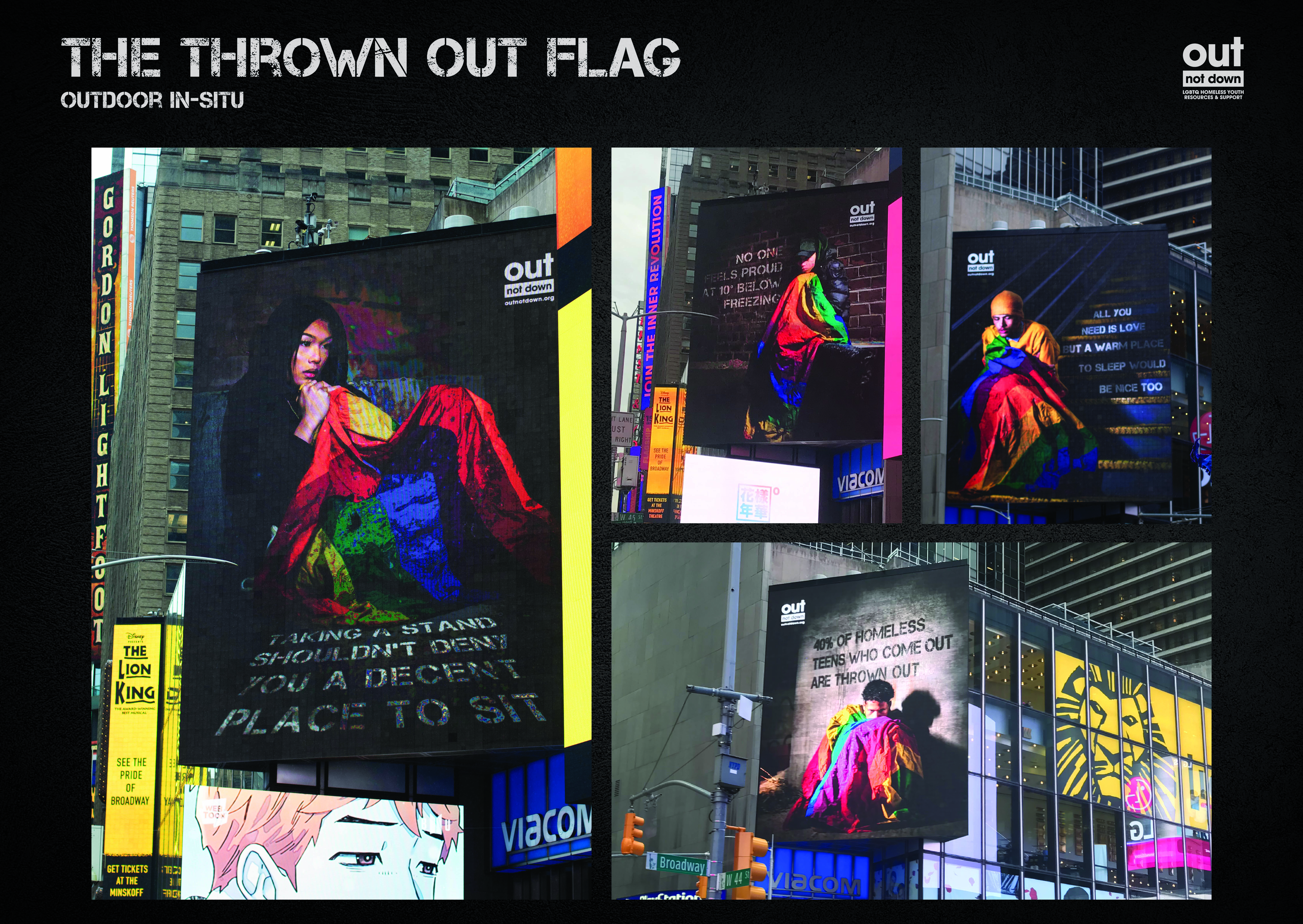