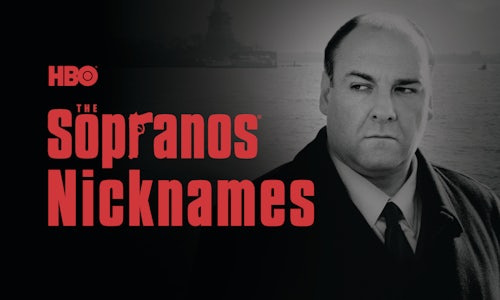 Never before have so many quality shows vied for our eyeballs. While the classic tagline “It’s not TV. It’s HBO” made perfect sense in 1999, the premium cable channel must compete with compelling offerings from the likes of Netflix, Amazon Prime, Hulu, FX, AMC, and many other TV channels today.

HBO asked us to devise a program for the 20th anniversary of the debut of the show that started TV’s second Golden Age: The Sopranos. The primary goal was to drive new, younger viewers among the entertainment junkie generation, so it needed to be buzz-worthy and able to boost the show’s streaming views. So, we enticed HBO’s Twitter followers with an offer they couldn’t refuse: their very own Sopranos-worthy nickname.

Our goal was to make The Sopranos feel alive again—to pull fans of the show back into the action with a compelling call to action and start a new conversation with those who’d never watched. We wanted everyone talking about the seminal show. Promoting HBO’s streaming services and raising the baseline streaming rate for The Sopranos were our objectives.

We chose Twitter as the online community to engage with fans in in real time.

To come up with our idea, we focused on nuances that made the series special. The Sopranos is a dramatic show that has elements of gallows humor. It is built around colorful characters, many of whom are despicable human beings. However, they are blessed with descriptive nicknames that tend to humanize and add frivolity to even the most cold-hearted of hitmen. To honor the show’s anniversary, we decided to bestow loyal fans with their very own Soprano-worthy monikers.

Knowing that we wanted to use mob nicknames as a central campaign component to engage fans, we based our Big Idea on the following insight: The Sopranos isn’t just another TV show about the mob—it’s one that makes you feel like you’re in The Family.

The show debuted in 1999, long before the advent of social media, and we loved the idea of merging the world of The Sopranos with the Twittersphere to celebrate the anniversary. Along with dedicated fans, we aimed to drive this younger, more diverse, digitally savvy crowd to HBO GO, HBO NOW and other streaming platforms to watch the show.

If you want to have a conversation, you do it in a place that’s built for conversations—like the Bada Bing!, or Twitter. We had a hunch that the latter would be the ideal spot to speak to Sopranos’ fans. We wanted to contain HBO’s chat to a single, discoverable space, so we opted for a social strategy that used a thread, not a hashtag.

We also wanted to make sure that everything about this outreach felt personal and in-line with the quality that people expect from the channel, so we shunned automation and generators. Rather than program a bot to assign nicknames, we hired writers, designers, and community managers.

At 1:10 p.m. on Jan. 10, HBO sent out a single tweet with a simple ask: “Reply to us and you might get a personalized, Soprano-worthy mob nickname.” We stuck with the established tone-of-voice and first-person-singular approach people have come to expect from HBO Twitter for the prompt so it felt like a real exchange between two fans of the show rather than a branded stunt.

As requests poured in, our team identified opportunities, wrote nicknames, got approvals and posted responses. We also kept a close eye on the responses to the posted nicknames and interacted with fans who wrote back to thank us for the nickname or had something to say about it.

A tipping point occurred when actors Lin-Manuel (“Lin the Man-uel”) Miranda and Ben (“Jean Ralphio”) Schwartz engaged in an exchange over their nicknames. While our program didn’t seed or pay celebrities to participate, we certainly think this interaction helped publicize our effort. Because soon after, the feed blew up with requests from Laura (“my Best Friend”) Dern, Roger (“The Feds”) Federer, Macaulay (“Filthy Animal”) Culkin, and Jane (“Janie Jokes”) Lynch.

After the session ended, we “cut to black” in homage to the show’s final scene.

Sopranos Nicknames was the epitome of a successful viral campaign. Ultimately, we delivered what was asked of us and more: Our tweet generated 300 million Twitter impressions and increased Sopranos streamings 330%. That’s a lot of action for a promo conducted in real-time with zero media spending.

The celebrity interest sparked a flurry of reposts that turned “Sopranos Nicknames” into a Trending Topic. Even a number of brands, including Hulu, Wendy’s and Olive Garden, wanted in on the honor. But this was a promotion for HBO fans, so all sorts of folks got handed fancy-schmancy titles and boasted about their handles throughout their social networks. Ultimately, we posted more than 100 nicknames in real time. It remains one of the year’s most memorable Twitter threads.

“Look, Brand Twitter rightfully gets a lot of flack. It tries too hard. It’s too gimmicky. It’s manufactured human interaction,” Fast Company wrote in a recap. “But this? This was goooood.”

Video for "The Sopranos" 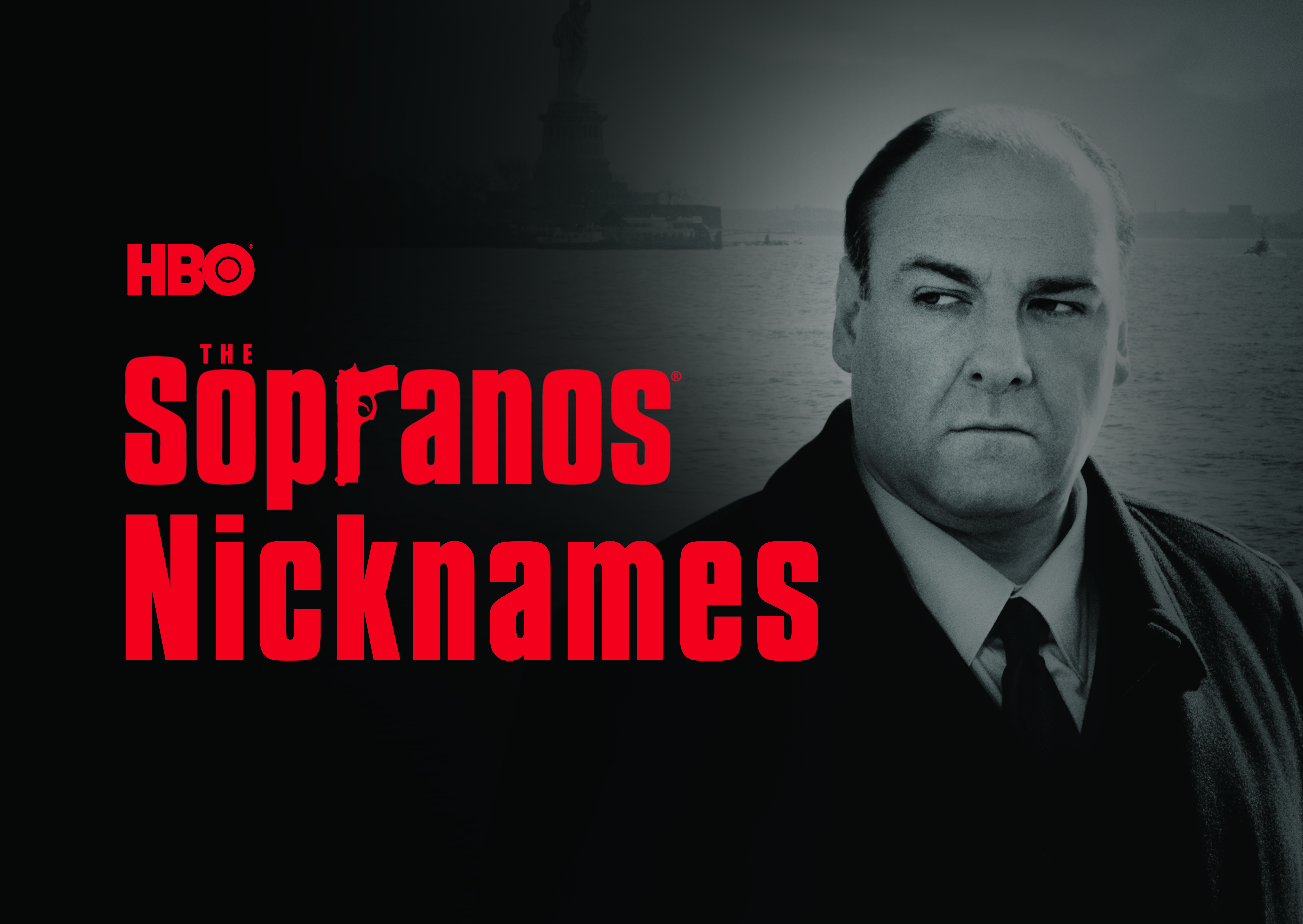 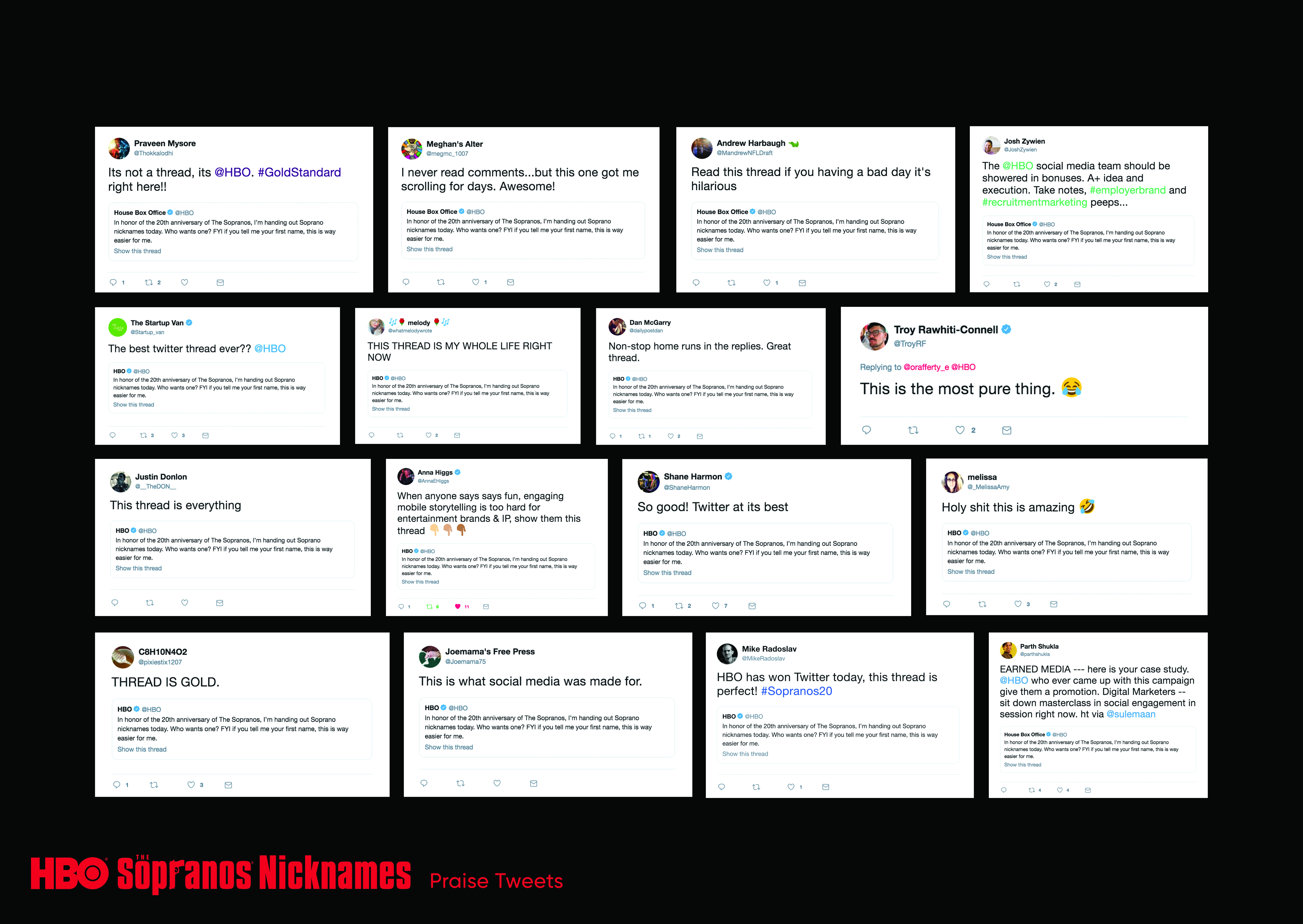 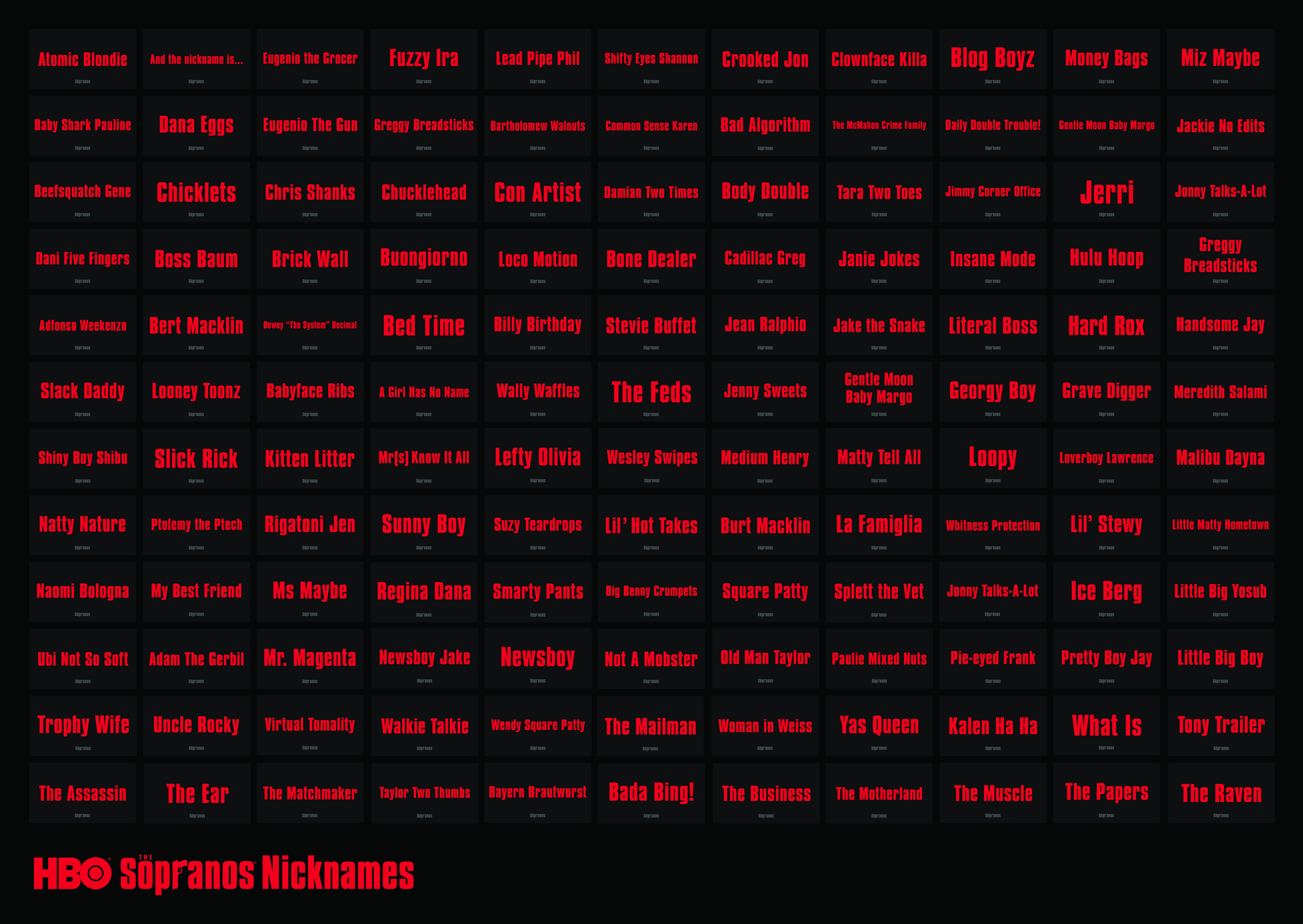