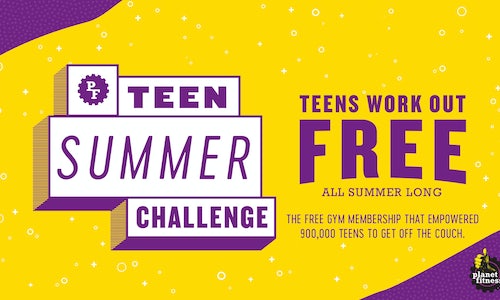 Through the Teen Summer Challenge, Planet Fitness sought out to give all teens across the country a free summer gym membership by opening their doors to high school teenagers ages 15-18 to work out for free from May 15 - September 1 at any of its more than 1,800 locations in the United States and Canada.

Planet Fitness aimed to boost awareness of the initiative on social media, as well as encourage participation by getting teens to sign-up for a free membership to work out at Planet Fitness all summer long. With a primary goal of getting as many teens to exercise across the entire country as possible, it was also a goal to get teens to extend their free membership to a paid one at the end of the summer, and for their parents to consider joining the gym too. Over the course of three-and-a-half months, Planet Fitness made it their mission to show teens how exercise can help reduce stress and anxiety, in order to help guide them to a healthier lifestyle where they can feel more confident, happy and less stressed as they begin a new school year.

Planet Fitness commissioned a national study to find out how teens felt about health and fitness, identifying that 91% of teens want to stay active and healthy over the summer, but many of them simply don’t know where to begin. This statistic, coupled with the fact that two in five teenagers report that their fitness levels decrease over the summer when school is out, is why Planet Fitness decided to give all teens ages 15-18 a free summer gym membership. In order to let them know about the program, it was necessary to engage with this younger audience on their turf, social media, and reach them with creative strategies to prompt them to take advantage of their free summer membership.

First, in order to get the attention of this teen audience, Planet Fitness filled their social feeds with content directed specifically towards this age group. As schools were starting to get out for the summer, Planet Fitness debuted their ‘Summer Affliction' themed launch content on social media, which alluded to the fictional summertime ailments that only teens would understand, being the digital natives they are. According to Pew Research, teens now devote more than three and a half hours a day to screen time, which is why they would be able to relate to fictional ailments such as scroll finger, binge butt, and spontaneous selfie smile that were featured in the posts. Social content also addressed the boredom most teens face during the summer when they don’t know what to do, and touched on the annoyances of what can happen when they do try to workout at home - pesky younger siblings, and chatty neighbors - all to show that Planet Fitness can help them free their summer from all of these things. All of this was shared on the social platforms teens (and their parents) use the most - Instagram, Snapchat, and Facebook. Social content also drove people to a landing page, which provided them with all the information they needed to know about the Teen Summer Challenge, like how to sign up, and which Planet Fitness location was closest to them.

To further promote the initiative, Planet Fitness partnered with influencer Caleb McLaughlin who stars in the Netflix series Stranger Things. Caleb made for a perfect spokesperson by already being a positive role model for teens, as well as indexing high with ages 15-18 on social media and an e-score of 67. Through content posted on both Caleb’s personal channels and ones owned by Planet Fitness, Caleb acted as a workout buddy inspiring and encouraging teens to both join and workout at Planet Fitness for free throughout the summer. Additionally, the newest season of Stranger Things was released on Netflix on 7/4/19, which made it a perfect tie to the Summer Affliction launch video, being a commonly ‘binge watched’ show. The timing of the series release in conjunction with the Teen Summer Challenge made Caleb and Planet Fitness hot topics on social media with teens throughout the summer.

Over the course of three-and-a-half months, more than 900,000 teens signed up for the national Teen Summer Challenge initiative and logged nearly 5.5 million workouts.

On social media, the program launch content was the year’s best performing posts on Planet Fitness native channels, with up to a 30% engagement rate on Teen Summer Challenge posts. Posts by Caleb McLaughlin garnered a 9.5% higher engagement than similar influencers, and 3.5% higher than his own content average, suggesting that the messaging, demographics, and execution struck a chord with his social following. Snapchat was the primary driver for reaching teens, netting more than 66M impressions and exceeding engagement benchmarks by more than double. The story ads earned a 70% video completion rate, exceeding the Snapchat benchmarks of 30%-60%. Additionally, the Snap ads drove over 400,000 swipe ups. Overall, Planet Fitness garnered over 100M combined impressions on social at the close of the program.

Consequently, Planet Fitness, through the Teen Summer challenge, helped teens start the school year with less stress, and inspired them to keep working out throughout the rest of the school year. 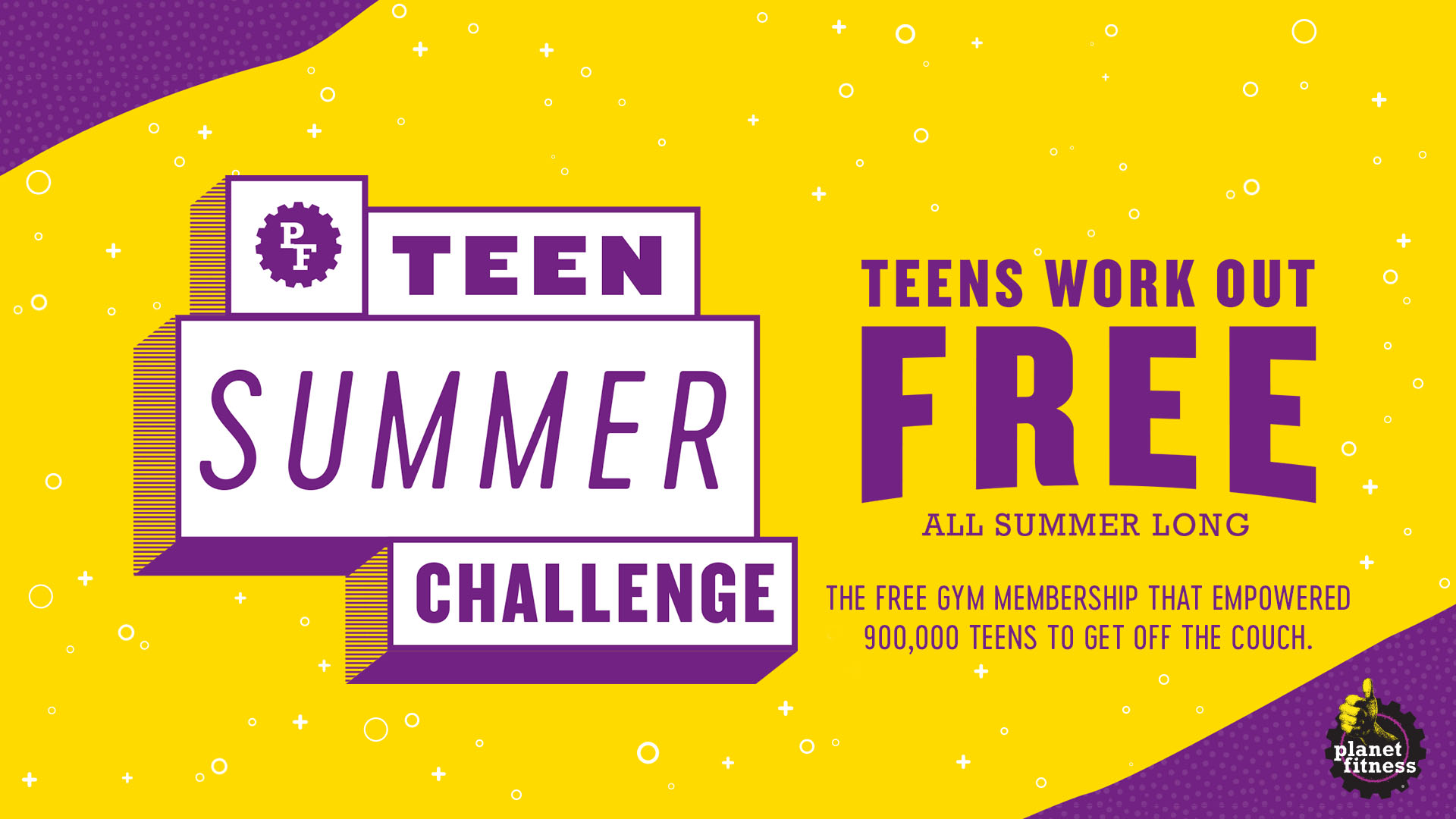 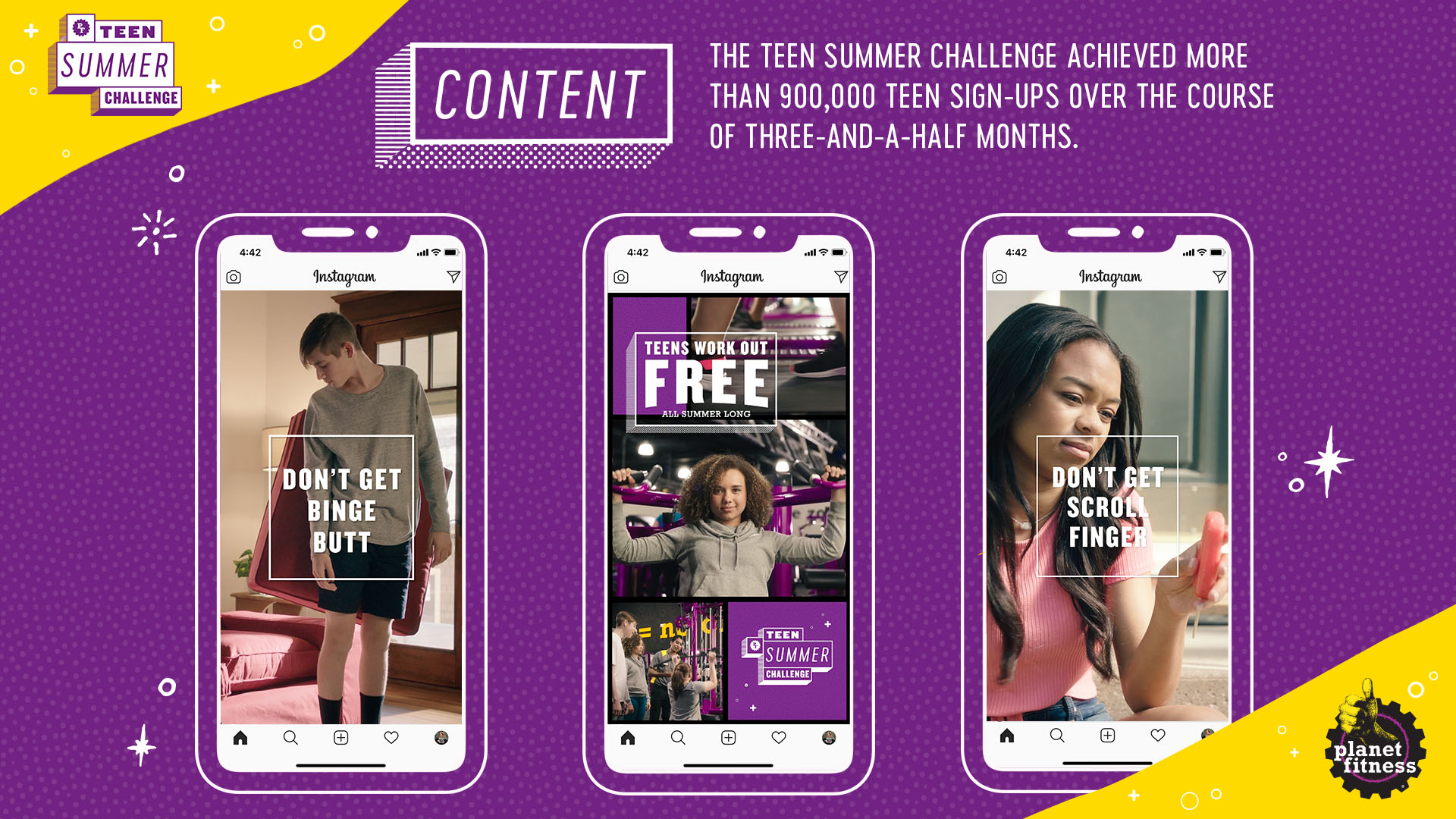 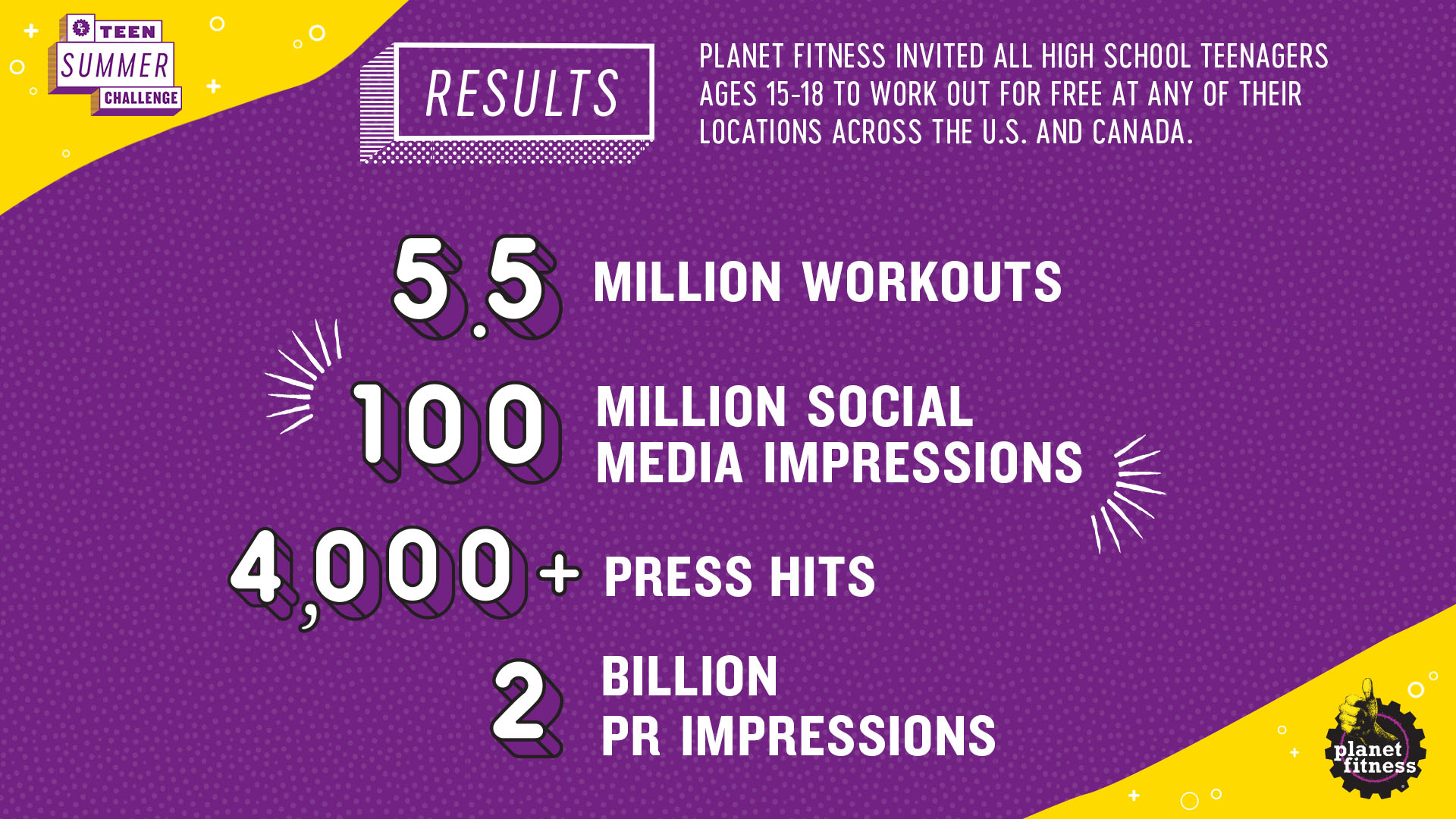 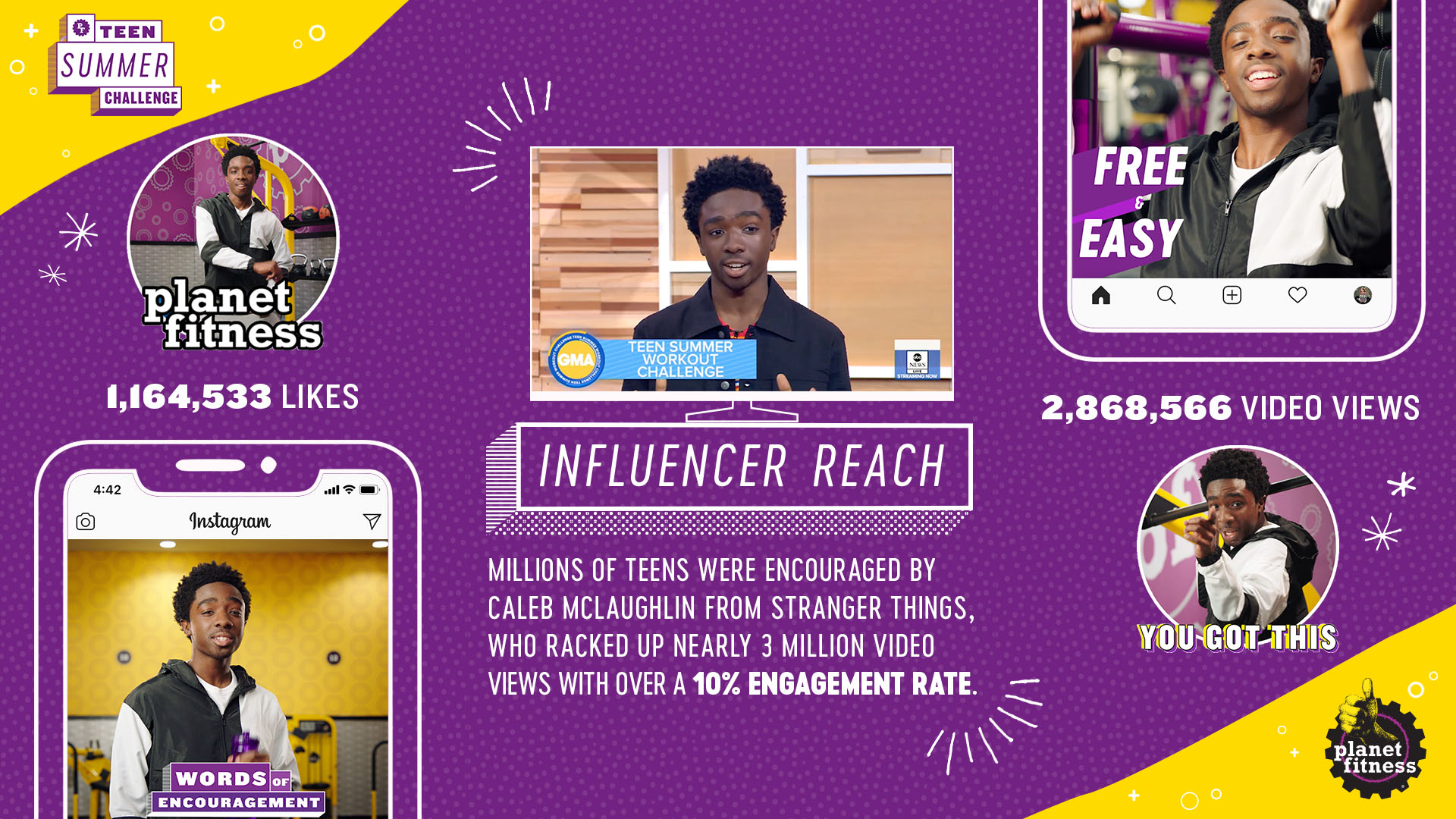 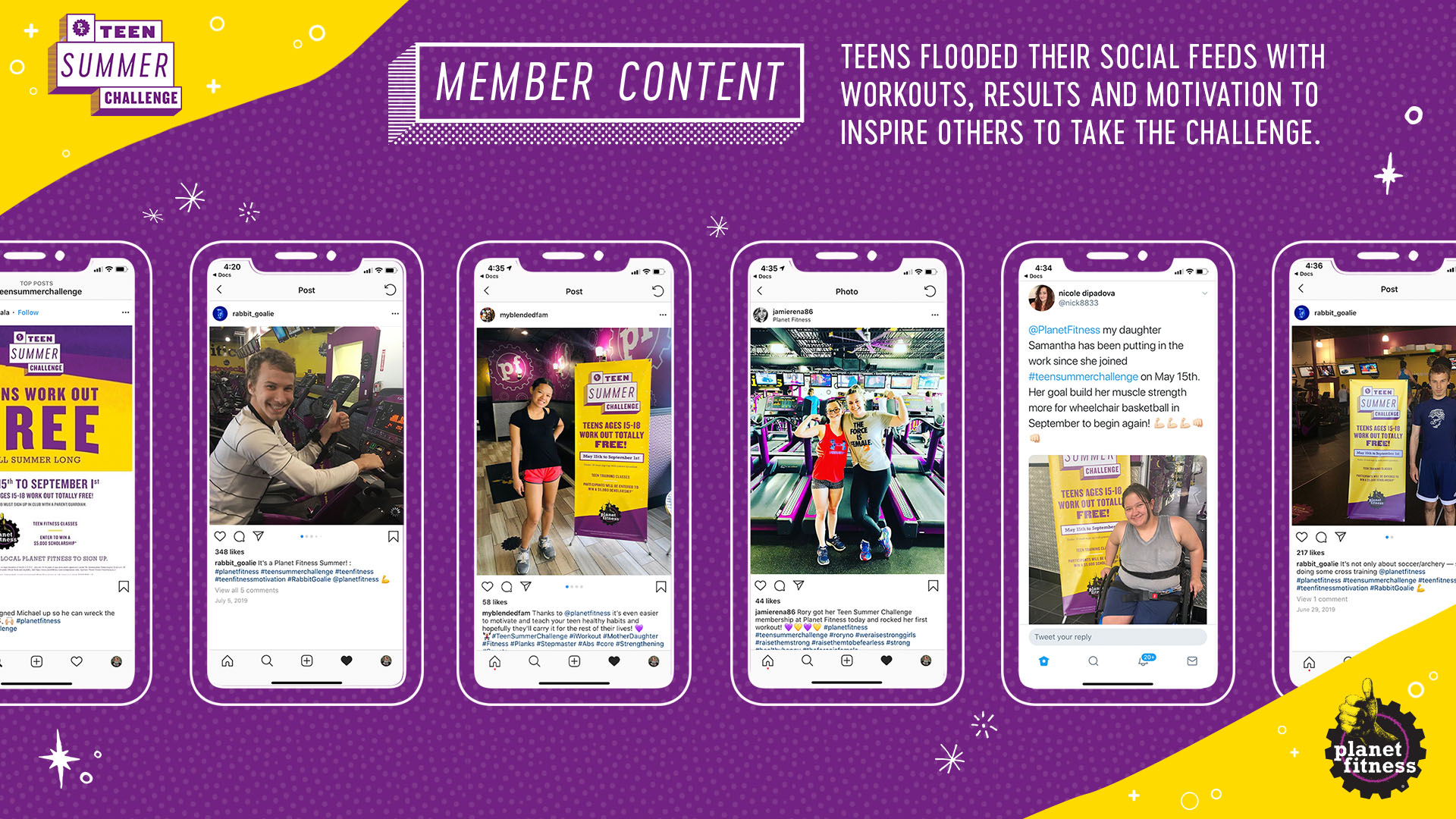