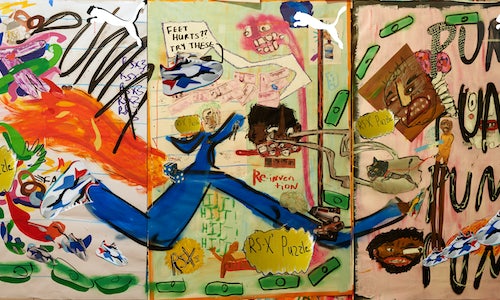 You know you’re doing something right when you’ve created so much hype for a product launch that people are *literally* stealing your ads off the street.

To create hype around a shoe as unique as the RS-X³ Puzzle we had to find a partner that was equally exceptional. Enter New York City street-artist and member of ASAP Rocky’s crew AWGE, Hidjiworld.

Next it was time to make something buzzworthy.

So we created a gritty Out of Home gallery in the East Village, trading traditional social ads for six bus terminals that engaged Hidji’s followers online and IRL over a six-week period.

To fill the bus stops, Hidji created three unique artworks that came together to tell the RS-X³ Puzzle and his own personal reinvention story. Drawing inspiration from the shoe’s puzzle colorway, the artworks operate like a three-piece puzzle to tell this unifying, reinvention story in Hidji’s extreme abstract aesthetic style.

And finally, it was time to launch.

We kicked off with a promotional video on Hidji’s Instagram channel to announce the collaboration and point his followers to where his works were being exhibited. He customized three pairs of the RS-X³ Puzzle, which he gave away to followers who visited our bus shelter ads and posted a picture of themselves with his work on their Instagram tagged with @hidjiworld and @pumasportstyle.

The works, which looked anything like typical bus shelter ads, made a real impact and
became highly coveted by his fans. They were so popular, in fact, that fans went as far
as breaking into the bus shelters and stealing the artworks eight times! It was an ad so
good, that people stole it.

We created so much hype that PEOPLE. STOLE. OUR. ADVERTISEMENTS. Really, people were so excited about our PUMA RS-X³ Puzzle campaign that we couldn’t keep our ads up for more than a day before they were stolen.

Oh, and a lot of people saw it.

We Are Social, PUMA