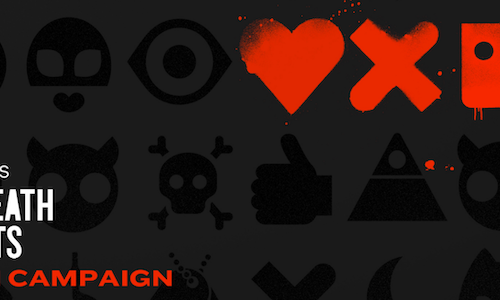 We developed a three-phase launch campaign, which consisted of activating hardcore genre fans, engaging countdown tactics, and then leveraging reactive, fan-inspired creative — all happening at the right times and in the right places. We knew if we could convert doubters into early evangelists, their genre influence would validate and propel our launch.

How? Cryptic codes.  A hidden trailer.  And an interactive livestream.  Our constantly evolving launch campaign excited fans of the genre, amplified engagement as they spread the word, stoked anticipation leading to the premiere, then celebrated the new community of fans.

While the Internet anxiously awaited five weeks for the release of the Love Death + Robots trailer after the initial series announcement, we kicked things off by rewarding the real animation fans: the nearly one thousand Instagram users who followed @LoveDeathandRobots when it was only a holding page.  One day before the trailer was released to the public, we posted 26 cryptic symbols from the series and assigned them each a letter. Then, an Instagram Story prompted followers to “Crack the Code” for a surprise. Over the course of three hours, hundreds of Love Death + Robots fans were DM’ed an unlisted YouTube link to the trailer.  Then fans did their thing, leaking the private link (posting their excitement) on Reddit, and gaining +10,000 video views within hours.

Following the trailer’s public release, we gave fans a drool-inducing taste of the 18-story series with an 18-day countdown leading to launch. Episode teasers, thematic trailers, and cross-posted content on Netflix channels built a community of nearly 10,000 die-hard fans—before the show even dropped. Then we took over Netflix’s YouTube for its first-ever countdown to premiere livestream, loaded with sneak peeks. The instant the series dropped, we “hacked” 14 Netflix series’ social accounts with custom content, cross-promoting Love Death + Robots in each series’ own unique voice and driving followers directly to Netflix to watch.

For six weeks following the release of the show, we kept the “now streaming” high alive for our 100K+ organic followers by celebrating everything fans shared. We took an always-on approach, turning tagged mentions and trending moments into new content daily across Instagram, Giphy, and Reddit.  Fans tagged @LoveDeathandRobots with fan art, inventive cosplay ‘fits and fresh tattoos, and we shared the love back. When we saw a wave of fans tagging us in Love Death + Robots tattoo pics, we activated a worldwide Love Death + Robots Tattoo Day event in five days.

One month after launch, we capitalized on the political conversation bombarding Twitter with a three-week Presidential Campaign: @Yogurt2020.  Our candidate’s voice, based on the popular sentient yogurt character in the episode titled “When The Yogurt Took Over,” took to Twitter to give America a glimpse at a more “cultured” leader.