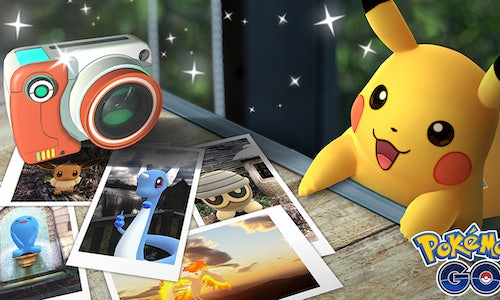 In 2016, Niantic and The Pokémon Company collaborated to bring the world its first major augmented reality (AR) experience at scale with the launch of Pokémon GO. From then on, hundreds of millions of Pokémon GO Trainers have used our AR features to capture Pokémon and AR photos of them during their first encounter. In 2019, our AR photo feature evolved even further. Now, Trainers had the option to take a photo of any one of their stored Pokémon instead of having to wait for an encounter, while spatial recognition improvements allowed Trainers to see the authentic size of their Pokémon and place them on any flat surface.

In celebration of this AR update, we decided to launch a global AR photo contest called the #GOSnapshotChallenge! Our objective for this contest was simple - to celebrate, highlight, and amplify all the creative ways our community can use our updated AR camera, encourage their love for Pokémon, and inspire daily GO Snapshot usage.

Everyday, people share millions of photos on social media in order to document their life’s journey. With millions of Pokémon fans, hundreds of unique Pokémon, and the world teeming with photo opportunities, our #GOSnapshotChallenge aimed to insert Pokémon GO AR photos into that rich daily conversation.

With fans of the Pokémon franchise familiar with the action of taking photos of Pokémon through previous games like Pokémon Snap, we knew that we wanted to create a set of contest categories that helped to recreate the joy and the unique challenges of taking pictures of Pokémon in a diverse set of environments. As a result, we created contest categories like the “Habitat Challenge” where participants needed to learn more about a Pokémon in order to take an AR photo of them in place in the real world that mirrors its natural habitat. This insight also helped to influence our category “Buddy Challenge” where participants needed to find ways to highlight the authentic connection between a Trainer and their Buddy Pokémon through an AR photo.

Attract a wide range of people/photographers

We knew that our Trainers have limitless creativity and wanted to encourage that creativity and freedom to take the feature to wherever their imaginations led them. In addition, we knew that the world is filled with millions of Pokémon and Pokémon GO fans who were aware of our updated AR photo feature, and there were countless more that we could reach through this contest. In order to broaden the appeal of this contest, we created a challenge category called “GO Create”. With “GO Create” we tasked participants to show us just how innovative they could get with our AR camera. We also regularly highlighted user generated AR photos through our social channels and by partnering up with brands like National Geographic, Crunchyroll, and Buzzfeed.

Knowing that we’ve previously hosted an AR photo contest, we also knew that we had to raise the stakes for this year’s contest in order to truly make it one of the biggest AR photo contests in the world. Ultimately, we decided that our contest’s grand prize should be something that tied back to our company mission of encouraging real world exploration and social interaction. As a result, for the first time ever, we decided that the grand prize winner for each of the 3 GO Snapshot Challenges would receive (2) tickets to a Pokémon GO Fest event of the winner’s choice! Lucky finalists were awarded with a temporary personalized PokéStop, using their winning GO Snapshot entry as its icon, that’s playable within the game.

6 weeks and thousands of entries later, we amassed:

But most of all, we helped to reaffirm the stories that Trainers build with their Pokémon as they explore the world around them. Pokémon hold a special place in the hearts of our Trainers, many have unique connections with their favorite Pokémon and enjoy encountering and learning about new Pokémon that can be discovered on their journey. We are proud to say that we have dedicated a campaign to celebrate those who want to document their adventures with the creatures that they hold dear. 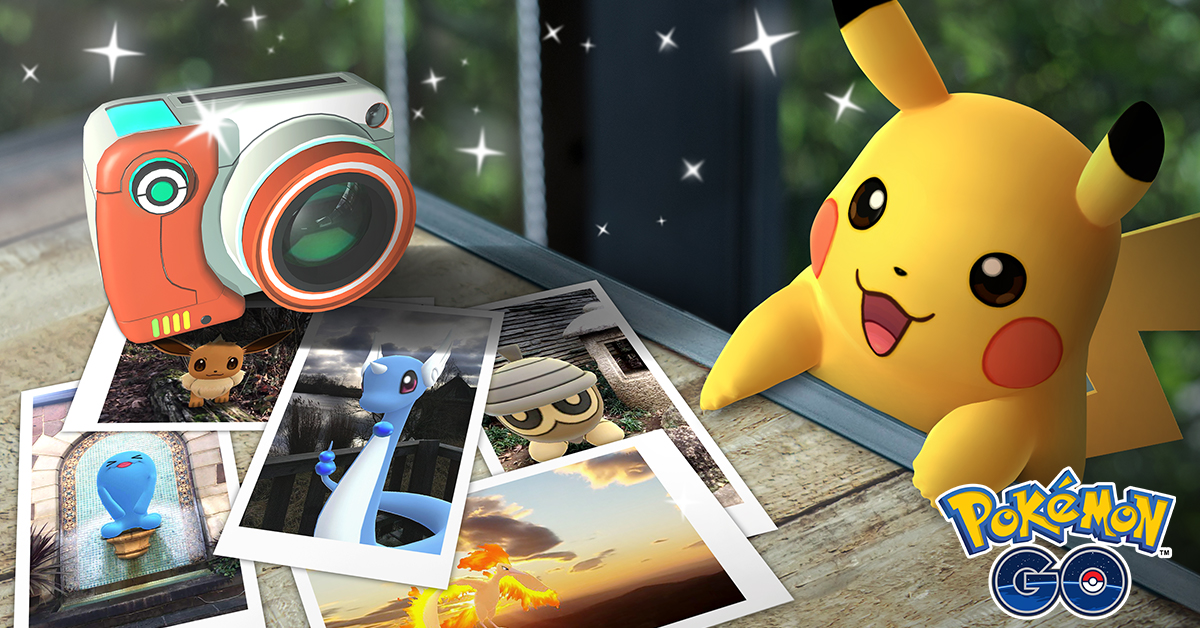 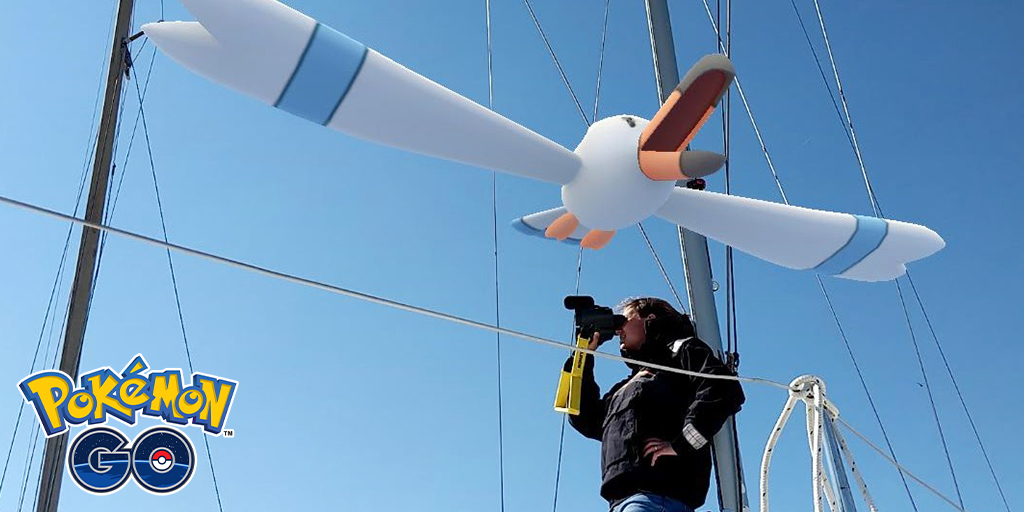 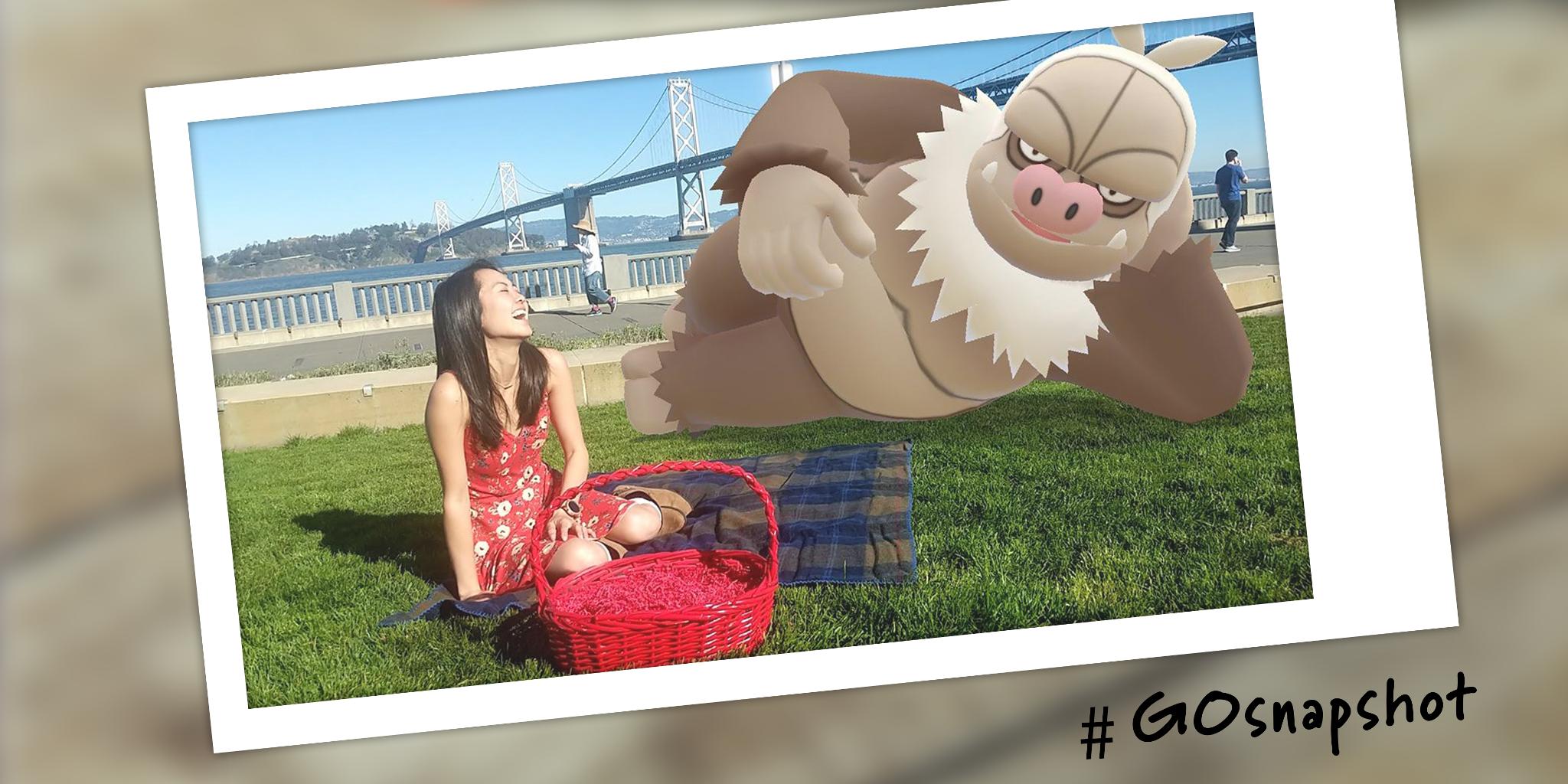 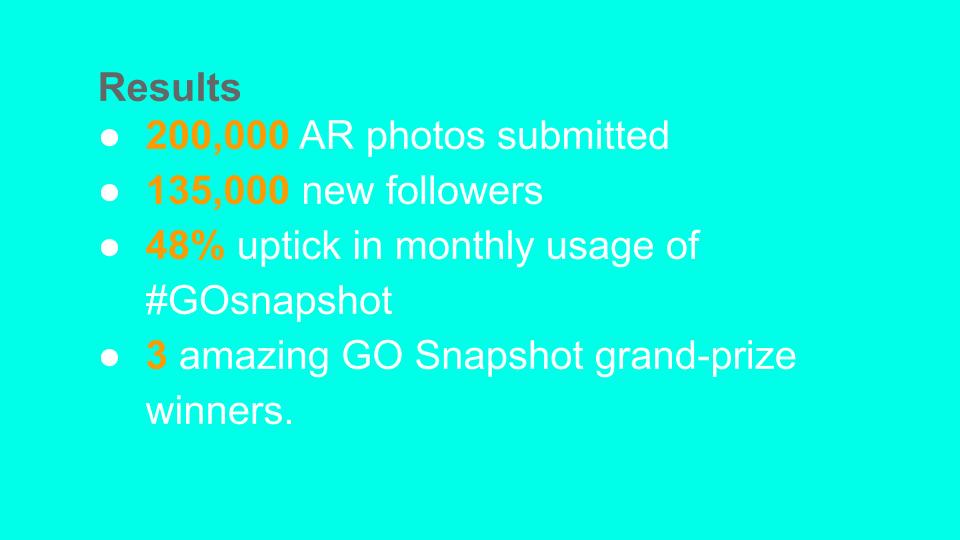 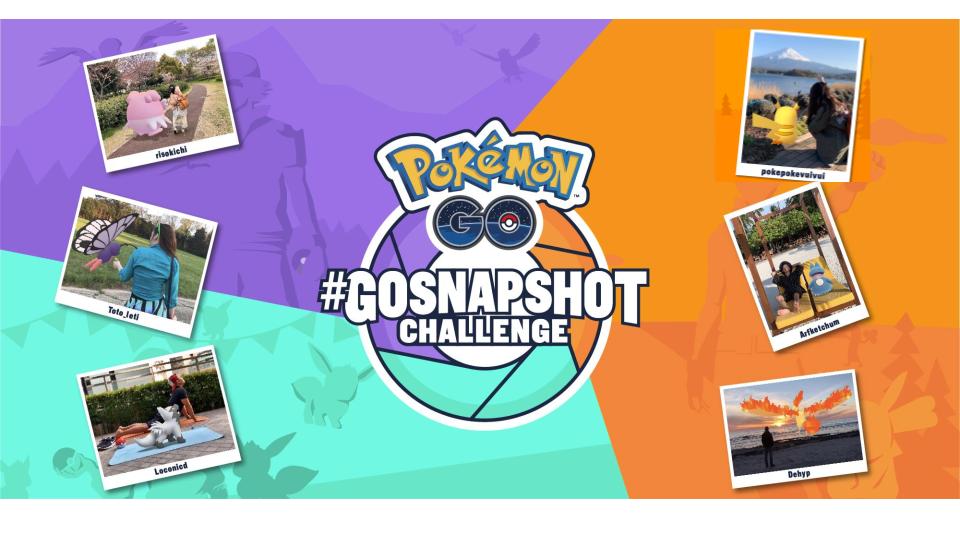 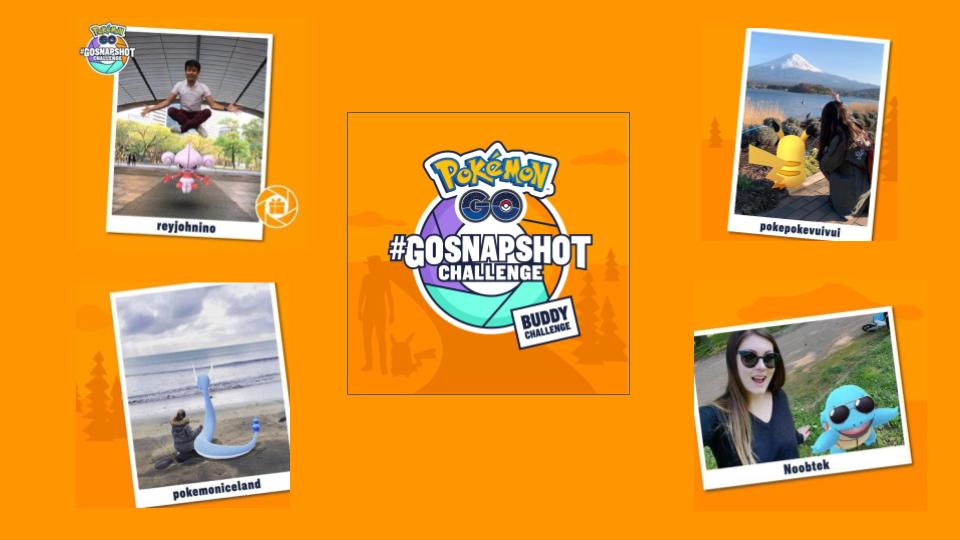 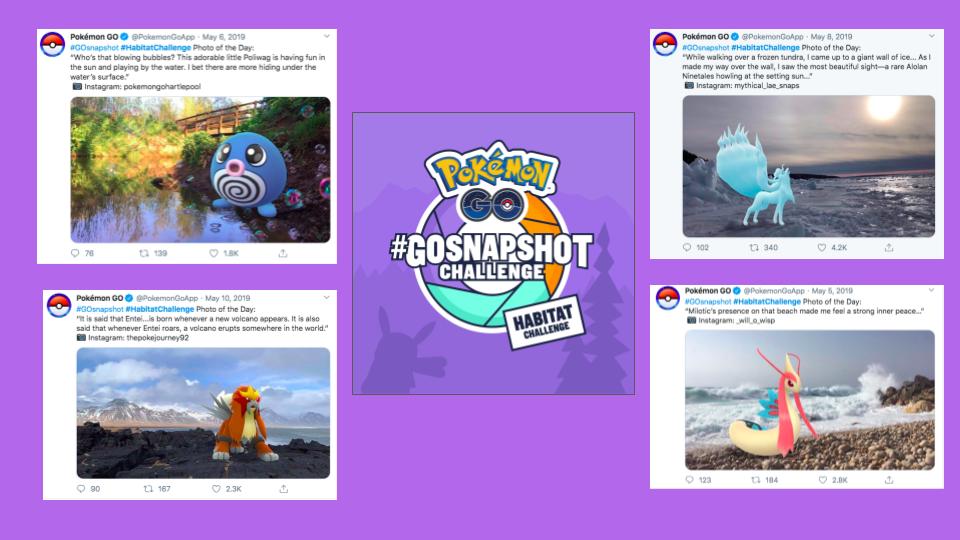 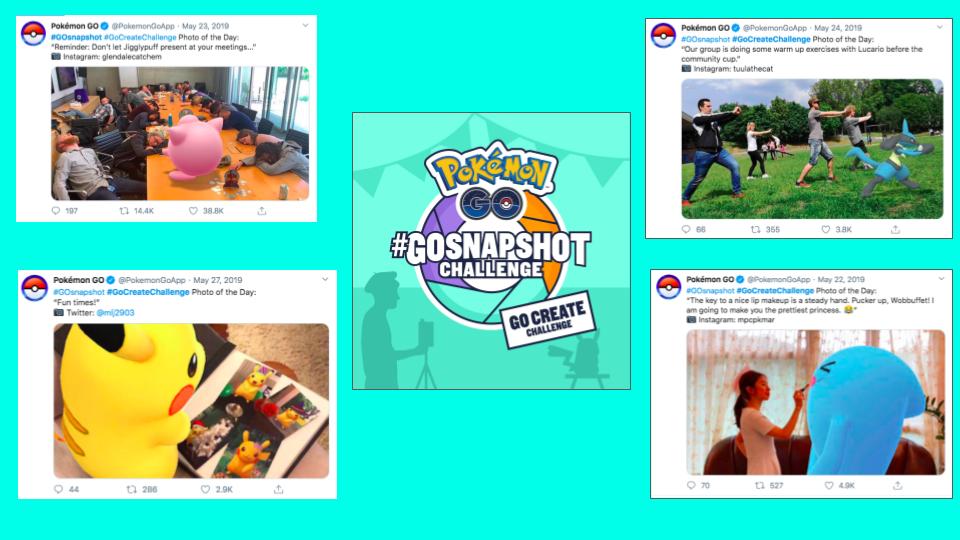 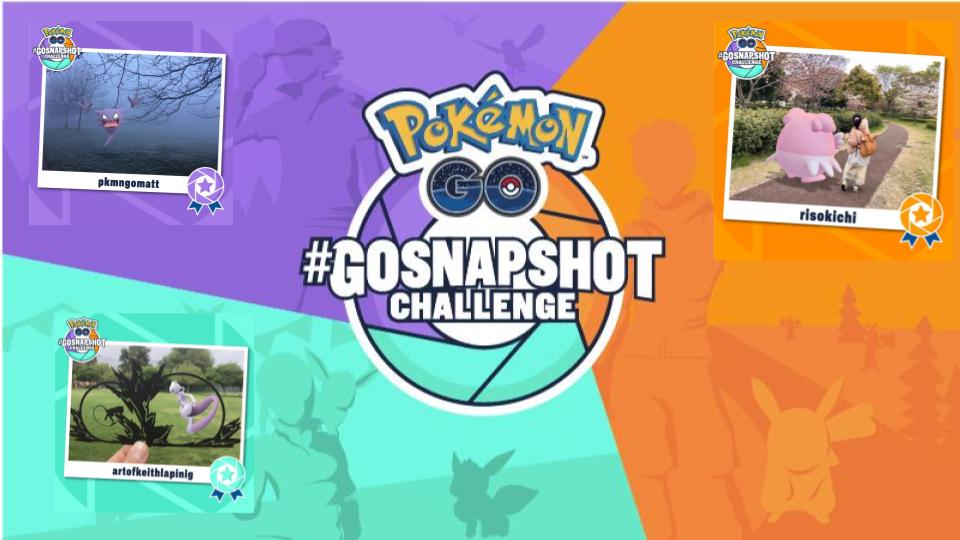