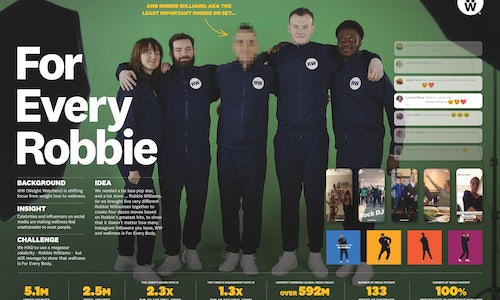 This included a new tagline, ‘For Every Body’ a desire is to connect to consumers on an authentic, human level.

WW asked us to bring their new ‘wellness for every body’ brand positioning to life across social media, earned media and influencer.

To use the new WW ambassador Robbie Williams, an elite celebrity, and still make wellness accessible for everyone.

When it comes to wellness, people on social media are faced with elite influencers living unachievable and unrelatable lifestyles which make them feel bad about themselves! Instead of inspiring people, it makes healthy living an impossible ideal that most of us can’t live up to.

Most wellness brands play into this ‘aspirational’ but ultimately demotivating approach but WW wants wellness to be attainable ‘For Every Body’.

To show healthy living is for everybody, wanted to rethink the use of celebrity ambassadors and turn the notion of “influencer” upside down.

Let’s find all the Robbie Williams’ we can - with different ages, bodies, ethnicities and genders. Then let’s get the ‘real’ Robbie Williams to call them up and ask them to make a dance film with them!

Our target audience was ‘everyday people’, so casting of the Robbies was vital. They had to be likeable, fit with the brand, have their own wellness ambitions …and most of all, they had to be REAL.

Once we had the right Robbies, we had to get them moving in a way which felt authentic and fun. Their experience had to be genuine, so it would translate to the everyday people at home.

With the help of Robbie Williams’ dance captain and Robbie Williams himself, the Robbies developed four easy-to-follow dance moves to get everybody moving.

We filmed the Robbies arriving on set and coming up with the moves, plus the final dance sequence.

We released an upbeat online film which showcased the dance moves, showing everyone achievable wellness and encouraging people at home to take part and uploading their own moves to social media using the hashtag, #WWForEveryBody.

We cast Robbie Williamses from all over the UK and got them together for a day of filming.

The media caught wind of our project but got the details wrong, with The Sun newspaper publishing a  Robbie x WW partnership article.

We played into the leak, releasing a cheeky GIF of Robbie ‘opening the door to a healthier lifestyle with WW.’

Soon after, the hero film went live on social and started racking up views.

Building on the excitement, we released ‘moves’ films inspiring fans and WWers to get moving and to post their videos, using the campaign hashtag #WWForEveryBody.

Robbie Williams selected his favourites to feature across his social channels.

The moves later became the basis of a routine hosted by Robbie’s dance captain at a pop-up House of WW in London where influencers and the public tried moving like the Robbies alongside each other.

The video has generated fantastic comments across all markets, yielding heightened brand interest. Majority of these comments are playful as viewers are wanting to dance along with Robbie, sign up for WW - and even change their names!

Video for For Every Robbie 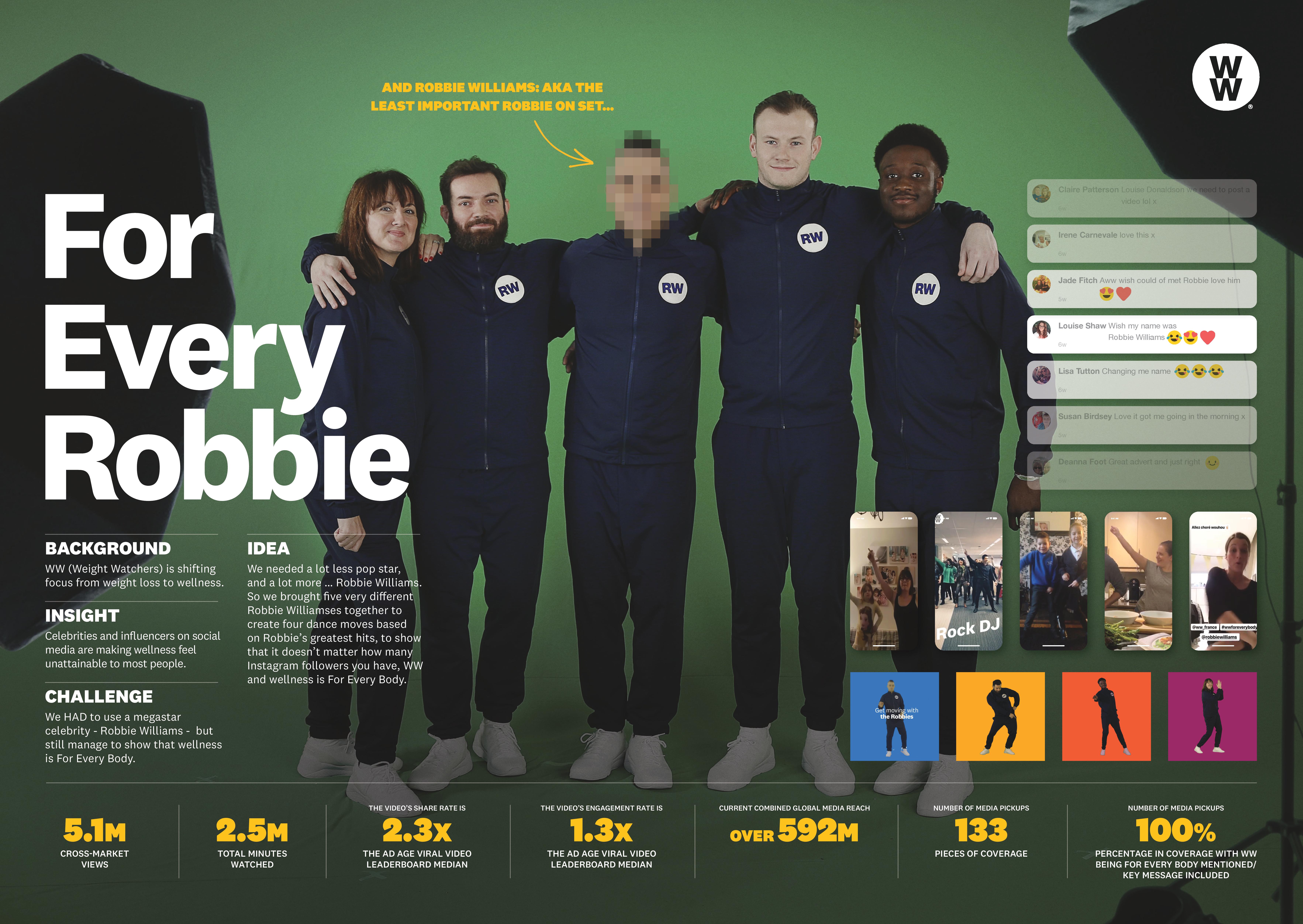