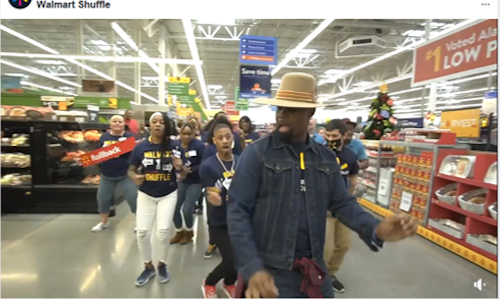 Improve associate and customer perception around Walmart, specifically as it relates to Walmart being an amazing place to work and fun place to shop.

Guiding Philosophy: At Walmart we believe our people make the difference, whether that's through selling merchandise or sharing their talents and passions at work with their community.

- Activate our associate base to show off their talents within a localized store context, thereby generating more authentic and organic content that they would feel a sense of ownership of and promote on their own

How We Brought it To Life:

We partnered with DJ New Cupid and adapted his 90s hit song and line-dance staple "Cupid Shuffle" specifically for Walmart.

The resulting "Walmart Shuffle" song that we co-created with Cupid was made available for public download, leading to hundreds of our stores sharing their best "Walmart Shuffle" dance moves on social media with the #walmartshuffle and #shufflechallenge tags.

To recognize the best store submission, we featured them in an official "Walmart Shuffle Music Video" alongside New Cupid, DJ Phat, and our own Walmart Radio DJs.

There were 479 total posts, all organic, tagged #walmartshuffle #shufflechallenge with a potential reach of 75MM.

The "Official Walmart Shuffle Music Video" post went organically viral with 25,557,341 impressions; 282,810 post engagements; 7.1MM video views; approx 45k likes/15k love reactions with only 64 angry or sad reactions; it was by far the highest performing post to ever be on the @WalmartWorld (formerly @WalmartToday) social handle;

In short, our "fun" associate-driven campaign organically generated viral reach & engagement, with high positive/low negative sentiment around the campaign itself and Walmart. Comment verbatims included both customers and associates articulating pride in their respective employer and community store, as well as non-customers who said that though they historically don't care for Walmart, they still commended the content. 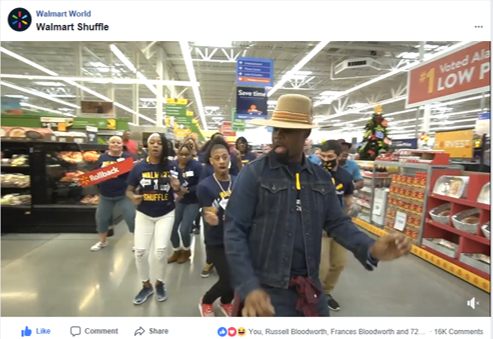