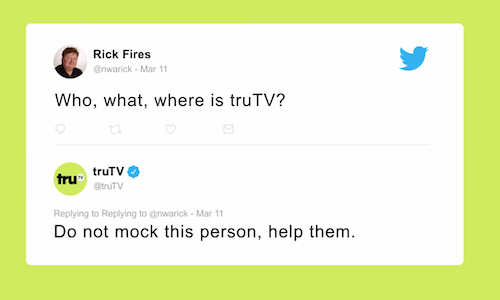 truTV has aired the opening rounds of March Madness since 2011, yet every year, sports fans think they're being so original when they troll us: "It's that time of year again… Does anyone watch truTV the rest of the year? Ha ha, very funny.

In 2015, after taking the high road, truTV decided to clap back on social. With a mix of self-awareness and sarcasm, we flipped the script, posting thousands of snarky-but-smart responses along with clever creative that raised brand awareness, entertained existing fans and even won over some haters.

The clapback continued in 2016, and in 2017, truTV challenged trolls to raise their game with funnier comedic insults – or we would do it for them. And it worked! After four years, truTV's brand awareness has grown, and the volume of negativity has substantially diminished.

So this year we went even bigger for this year's PSA-style launch– "truTV Awareness Month" -- expanding from social responses to a 360 multi-platform campaign that included linear spots, extensive free offerings on our apps, custom VOD messaging, a social campaign featuring hundreds of clever videos with our talent directly addressing basketball fans, a targeted trade push, and a strategic paid social media plan.

During March, we published 1,418 posts in support of the #truTVAwarenessMonth campaign. The campaign utilized an Always On activity layer for the entire month, linking #truTVAwarenessMonth posts to promotion of new episodes. This was coupled with targeted new viewer outreach, a social war room reactive/response peak effort during the first round tournament week. The total campaign was mentioned nearly 30k times across Twitter, Instagram, and Facebook. The posts we published generated 132,584 social engagements (likes, comments, shares, and link clicks) for an average of 94 social engagements / post. The social war room campaign targeted new viewers during the tournament week focused on responses and reactive tweets, in order to drive significantly higher engagement.

The vast majority of our reactive tweets were direct replies, meaning only people who followed both accounts involved could see our tweets. Even with that limitation, we achieved 1,505 impressions per tweet thanks to a very high engagement rate. Our reactive tweets generated an exceptionally high engagement rate of 2.63% as well as a 23.95% view rate, more than double the baseline campaign rate. For comparison, #truTVAwarenessMonth tweets published outside of the reactive campaign week generated an engagement rate of 1.81% and a view rate of 11.53%.

3/11-3/18: Week of March Madness; no new episodes of originals during this week

And truTV Awareness Month paid off in impressions, views, and new viewer conversion!

• On Air conversion for new viewers during the week MM games: 19% (compared to 6.3% in 2017; Nielsen NPower analysis measures the percentage of new Viewers who subsequently viewed truTV prime time shows).

This campaign continues a multi-year social effort to capitalize on the influx of new viewers who drop in for the opening round of basketball games. 2018 conversation trended year-over-year in a strongly positive direction with positive sentiment categories (brand love +35, show love +20, Jokers love +50, and defending truTV +) all growing as a percentage of total conversations and negative categories all decreasing with the exception of one category (misc. negative +15) which only proves that sometimes, gripers gonna gripe. 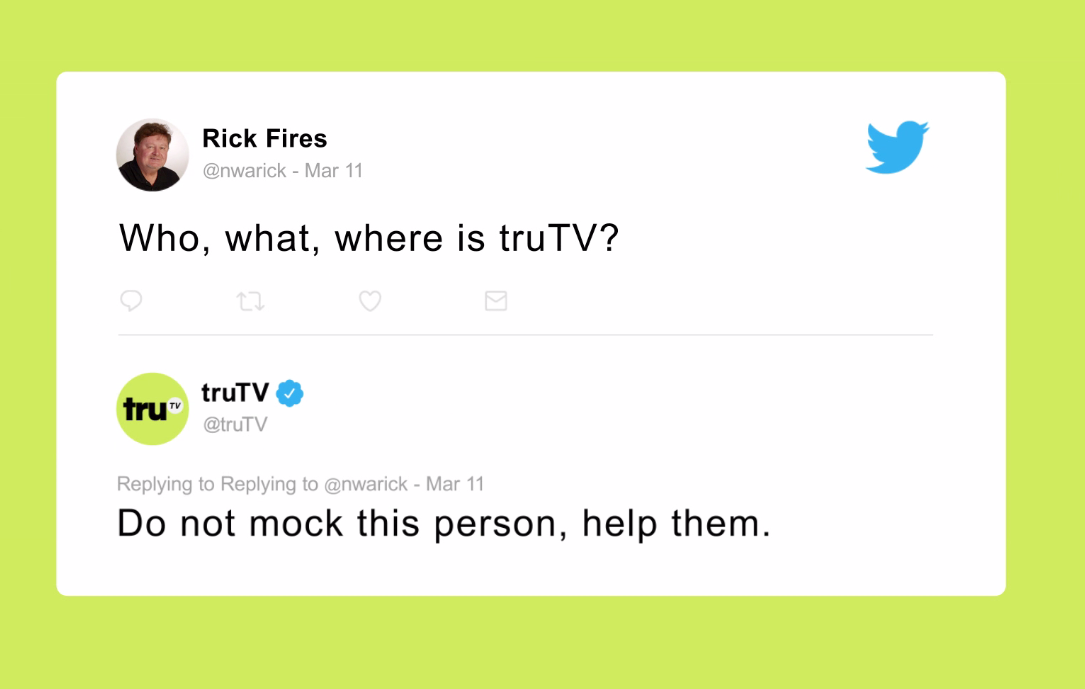