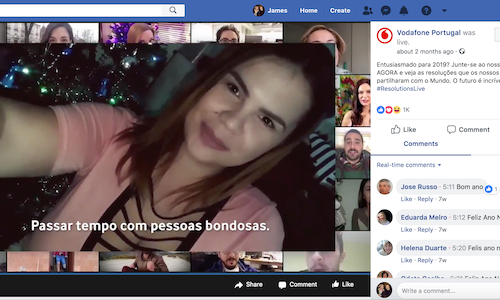 Vodafone enjoys high brand awareness globally. In 2017, the brand launched its current positioning, which is focused on the theme of optimism about the future through the possibilities of technology. As a result of its brand positioning, Vodafone wants to inspire people to capture the opportunities of a digital future and build a better future.

New Year's Eve is considered one of the most optimistic moments in time, when people are looking forward to a fresh start, usually expressed through New Year Resolutions. As a brand that is focused on the theme of optimism, it was essential that Vodafone had a role to play to reinforce this spirit and also give its audience across different markets a platform to take part and share this optimism.

Consequently, the objective of the 2018/19 New Year campaign was to reach and engage as many people as possible before, during and after New Year's Eve, in order to spread Vodafone's message of optimism for the future.

In most recent years, the Live experience within social media has added a sense of authenticity and truism to the sharing experience, which is a key component of social media. It has created a closer bond between everyone. From influencers and celebrities, to brands and also to people with each other. Because of Live, we can be anywhere and everywhere. Because of live we can share moments of happiness, joy and optimism with people all around the world.

So we thought, why don't we let people share their resolutions Live on Facebook on New Year's Eve and let the world cheer them on. After all, when we tell people about our resolutions, we are more likely to keep them.

We worked with Facebook and their tech partner, Telescope, to create a bespoke Live experience on each of the seven participating Vodafone local Facebook channels (Albania, Czech, Egypt, Greece, Portugal, Romania, and Turkey), where people could share their New Year's Resolutions Live.

The whole campaign started with Digital advertising, PR and Influencer engagement just around Christmas, when everyone was starting to think about their New Year plans and resolutions. This drove awareness and participation of the Live event.

The campaign drove people to a page where they could upload their submission videos to the world.

On New Year's Eve, people watched the LIVE event featuring the best of the submissions for their country. Viewers could interact with the stream through comments, reactions, and a live HTML optimism barometer.

Overall, the campaign reached over 85 million people across the 7 participating markets with 260 M+ impressions. The Vodafone brand recall increased with 4.5 points.

Over 50,000 people watched the Live event and 500,000 watched the feed across the day with 99% of positive and optimistic reactions and comments. Our average Live engagement rate was over 11%, which is very high considering that the only incentive was to share the moment of New Year with other people on Facebook. 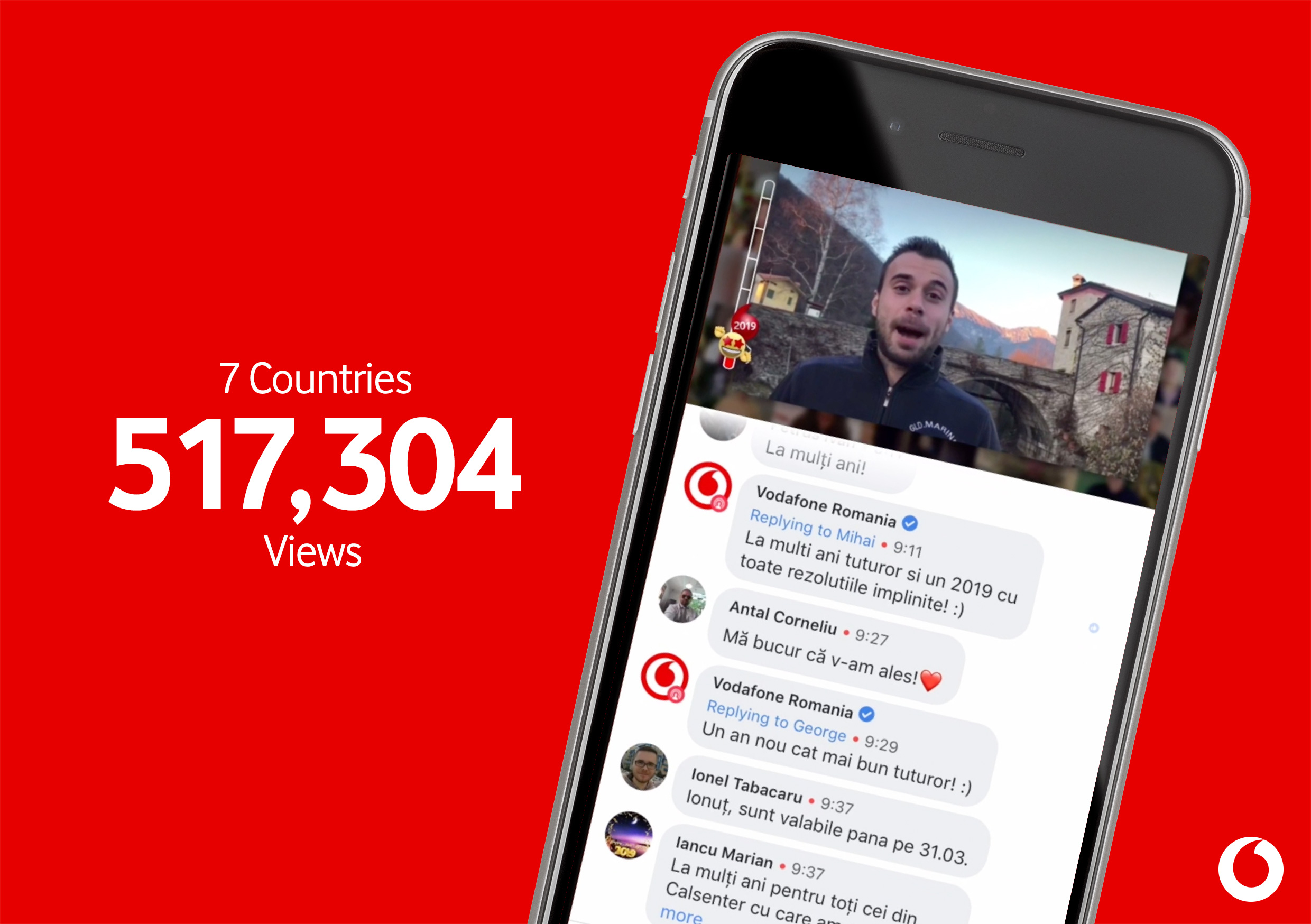 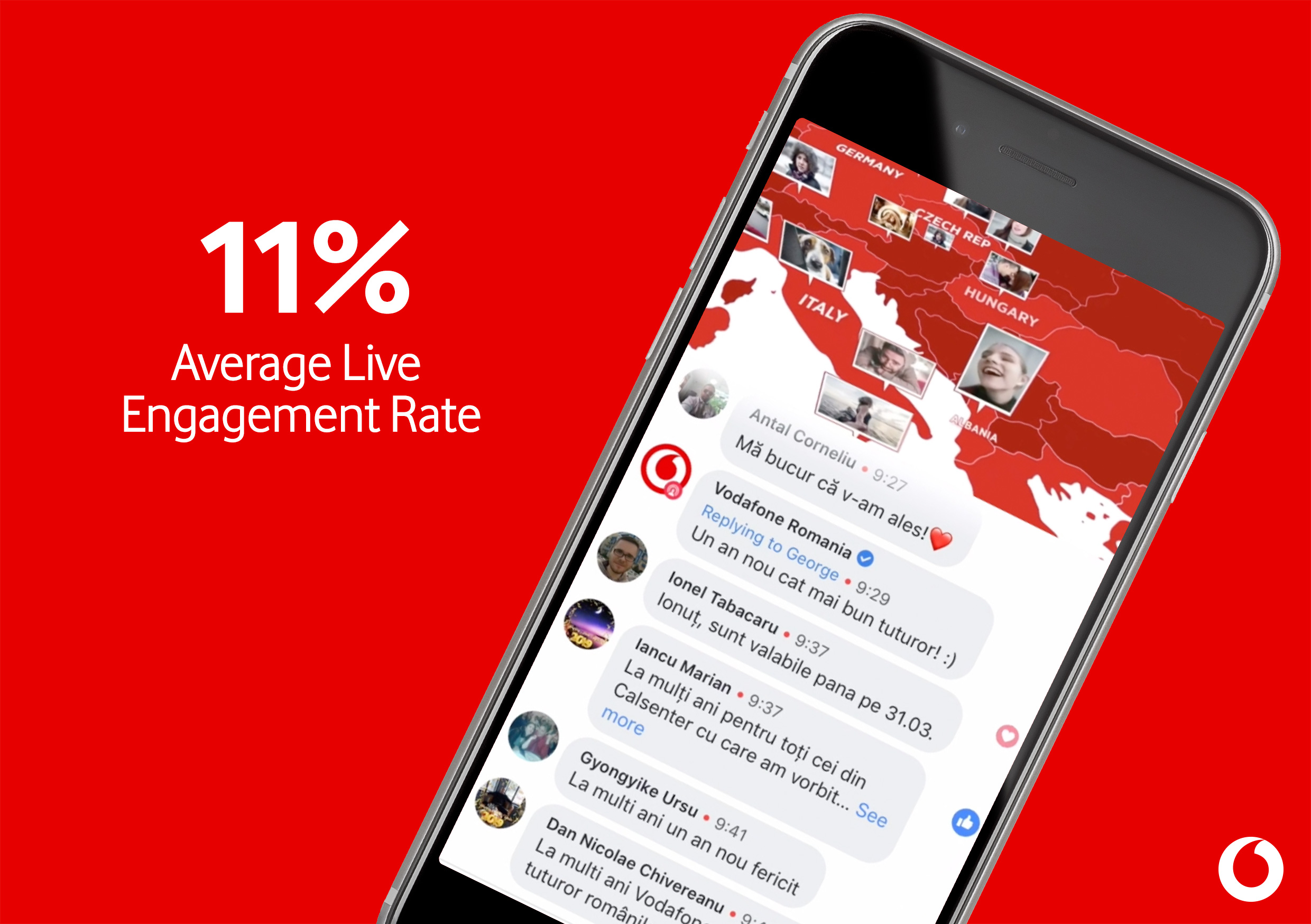 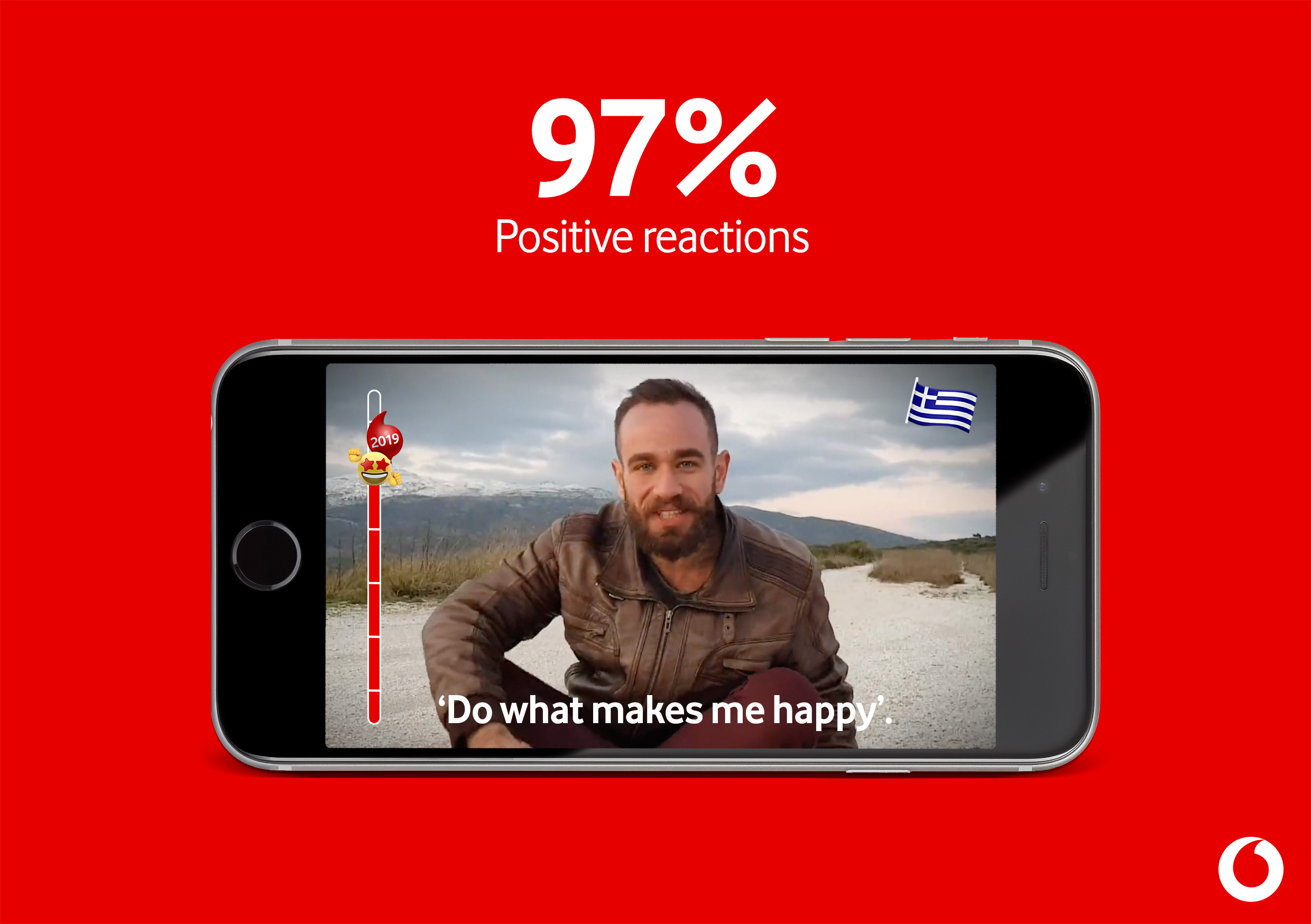 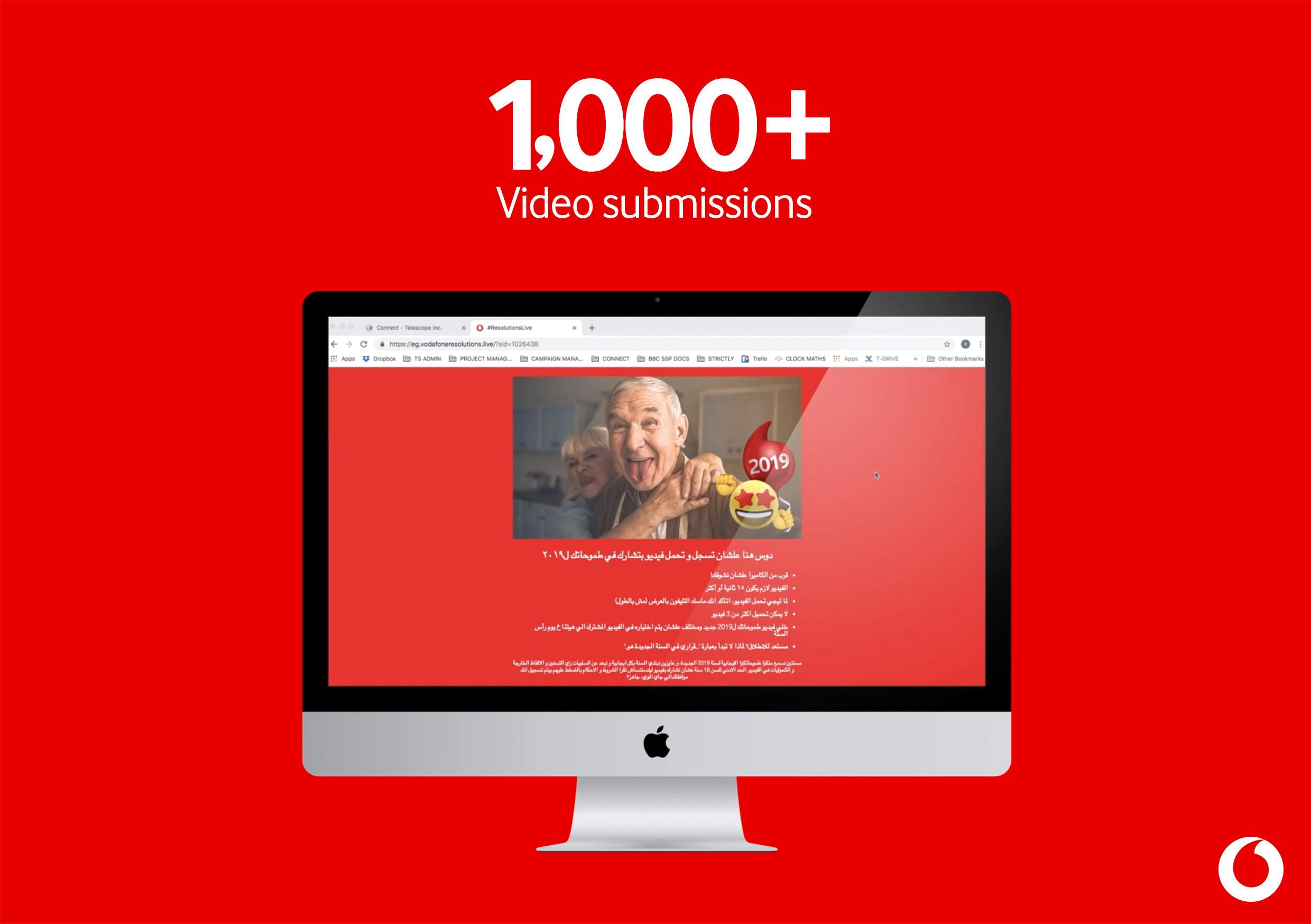 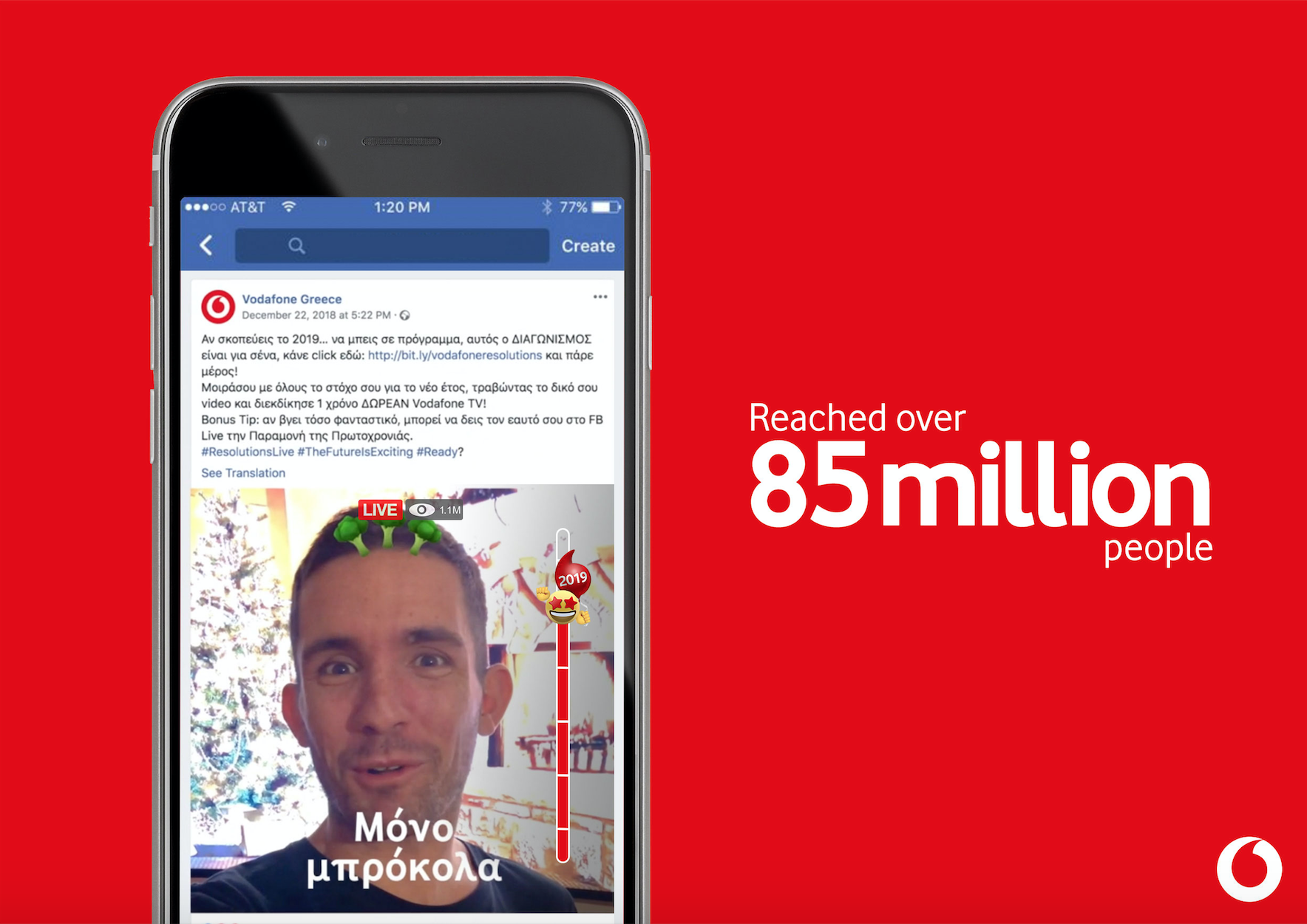