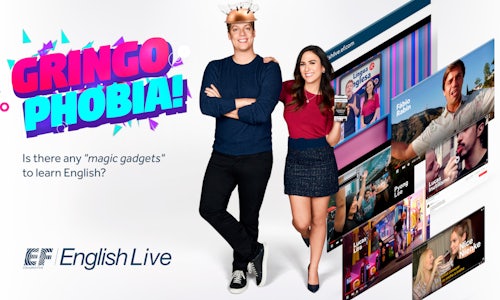 EF Englishlive is one of the largest online English school in the world. The goal of the campaign was to show the public there is no "miracle" as to learning the English language in that, in order to truly learn it, it is necessary to really study in a real online school with native teachers and specialists. That demands time and dedication, without magic formulas and shortcuts to accelerate the learning process and avoid the "gringophobia" speak fear effect.

The main focus was to reinforce Englishlive as a reference in e-learning in Brazil, generate brand engagement and convert sales as a consequence of such an engagement.

In order to support the actions on Internet and TV, we've produced a Social Data Intelligence based plan and made use of both Tatá Werneck and Fabio Porchat (leaders in sales and share of voice on previous Englishlive campaigns) and the most influential digital influencers in Brazil so as to create exclusive content about such a campaign in the lowest sales season of the year.

All this work resulted in a huge amount of leads to Englishlive's sales force, converting to a high record sales and revenue record. Today, Englishlive Brazil has become the greatest and most profitable operation of the EF Group around the world.

As the primary target audience were those connected to the online universe, heavy-user on mobile, ages 25-40, classes A B, we've explored the universe of unusual gadgets for learning foreign languages, coupled with the credibility of two renowned comedy artists and the most influential digital influencers in Brazil.

Through a robust planning based on Social Data Intelligence, we have identified five kinds of creators with high affinity to the target, to create an unique and hilarious content by unmasking the miraculous gadgets, talking about the importance of language in their personal challenges and reinforcing the importance of the investment in learning the global language in a renowned school.

The social media action preceded the launch of the campaign on TV (the commercial was a look-like 80's tv ad with direct sales of the gadgets), and had the goal of given credibility to the brand and generate a significant amount of leads for the direct sales team.

Englishlive also noticed a large movement of its users for mobile devices and, because of that, it started to focus on the development of its main innovations through mobile; thereby users were always directed to the best experiences with the service provided by the platform. Based on this premise, all creatives contain call-to-actions focused on each of the stages of the campaign, either in acquisition with the "special discount" or in retention with the "change your life with english live", thereby all consumers or potential consumers had the main action to take clearly.

We've developed a campaign presenting "miraculous gadgets" so as to learn English faster, e.g., "English Tongue", "Mouth Lipstick", "Brain Download" and "Instant Hole". Those gadgets were supposedly created by an Innovation Center in Amsterdam (Netherlands) for the Brazilian market. So, we've chosen influencers who have reliability of the target, and specialized in "reactions videos" to try these inventions firsthand in strategic places around the world.

The action kicked off on social networks with an "Inutilismo" video on Youtube about his travel to Amsterdam after a mysterious invitation. The construction of the storytelling presented the brand subtly, exploring the gadgets in real packages, easter eggs in strategic places and the concept of the Dutch Innovation center that would launch this unlikely products in the Brazilian market.

The "Inutilismo" influencer travelled to Amsterdam and met "Nice Nienke", a Dutch influencer who is famous in Brazil by publishing videos trying to speak in Portuguese. "Nienke" introduced the inventions to "Inutilismo" and asked him for a challenge to try one of the gadgets in Amsterdam streets and send the other inventions for selected Brazilian influencers.

After the video launch, the "tv spots" celebrities posted a Video Tweet in their own profiles, challenging the other three youtubers, who published videos about their experience with the gadgets around the world in a funny "prank style" content, focusing in the reactions of the public trying to interact with a non-english native speaker.

Fabio Rabin, stand-up comedy artist that suffers from "gringophobia" used the "English tongue" in the Walk of Fame street in Los Angeles, and tried do invade Quentin Tarantino's Movie set with the miraculous gadget.

Pyong Lee, influencer specialized in hypnosis and magic travelled to Las Vegas and tried to succeed with the "Brain download" in Las Vegas Boulevard.

Lucas Lira, influencer that doesn't speech a single word in english travelled to Orlando to try the "Instant hole" to hide into when the problems with communication became unmanageable.

To conclude the storytelling, Nice Nienke produced a video "reacting" about the other influencers videos and explained to the audience that the Innovation Center was just a funny joke and that there is no shortcut as to learn the English language.

The content proved the importance of a language fluency for all kind of situations, from the simple ones (such as ordering fast food in a drive-tru) to difficult ones (such as trying to participate in a Hollywood movie action test).

In addition to the topics related to new inventions to more easily learn English, a series on Easter Eggs was inserted to refer to other miracle solutions as of previous English Live campaigns.

All the posts and videos were published with parametrized links to promotional landing pages, where the leads were captured to Englishlive's sales force.

All media delivery was measured and controlled through analysis of cost for subscription, event cohort of revenues and LTV.

8,4 MILLION VIEWS OF VIDEOS (+283% more than the the previous year influencer marketing campaign)

11,2 MILLION ENGAGEMENTS (+351% more than the the previous year campaign)

563 THOUSAND MENTIONS, in that 96% were POSITIVE REVIEWS (+976% more than the the previous year campaign) 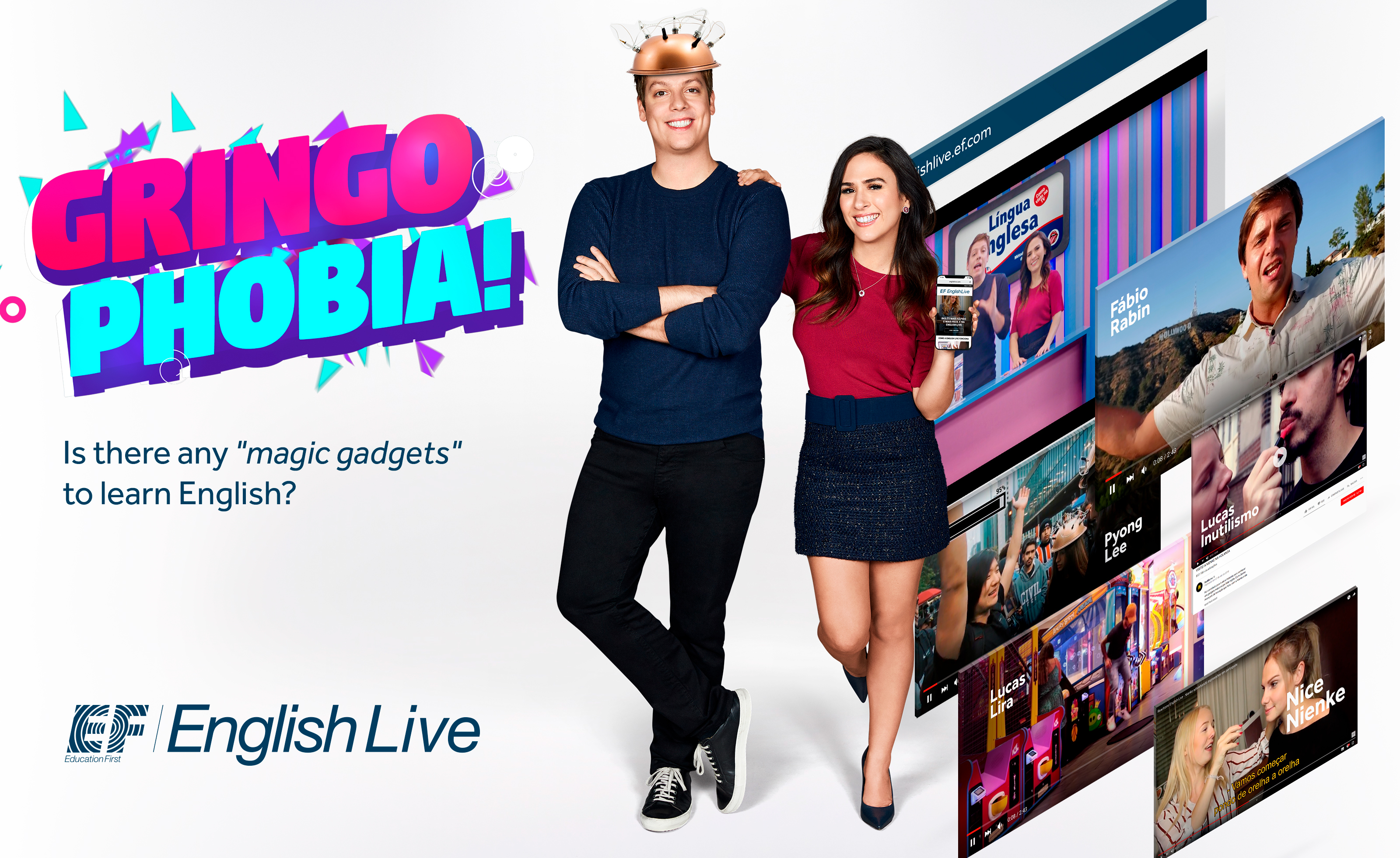 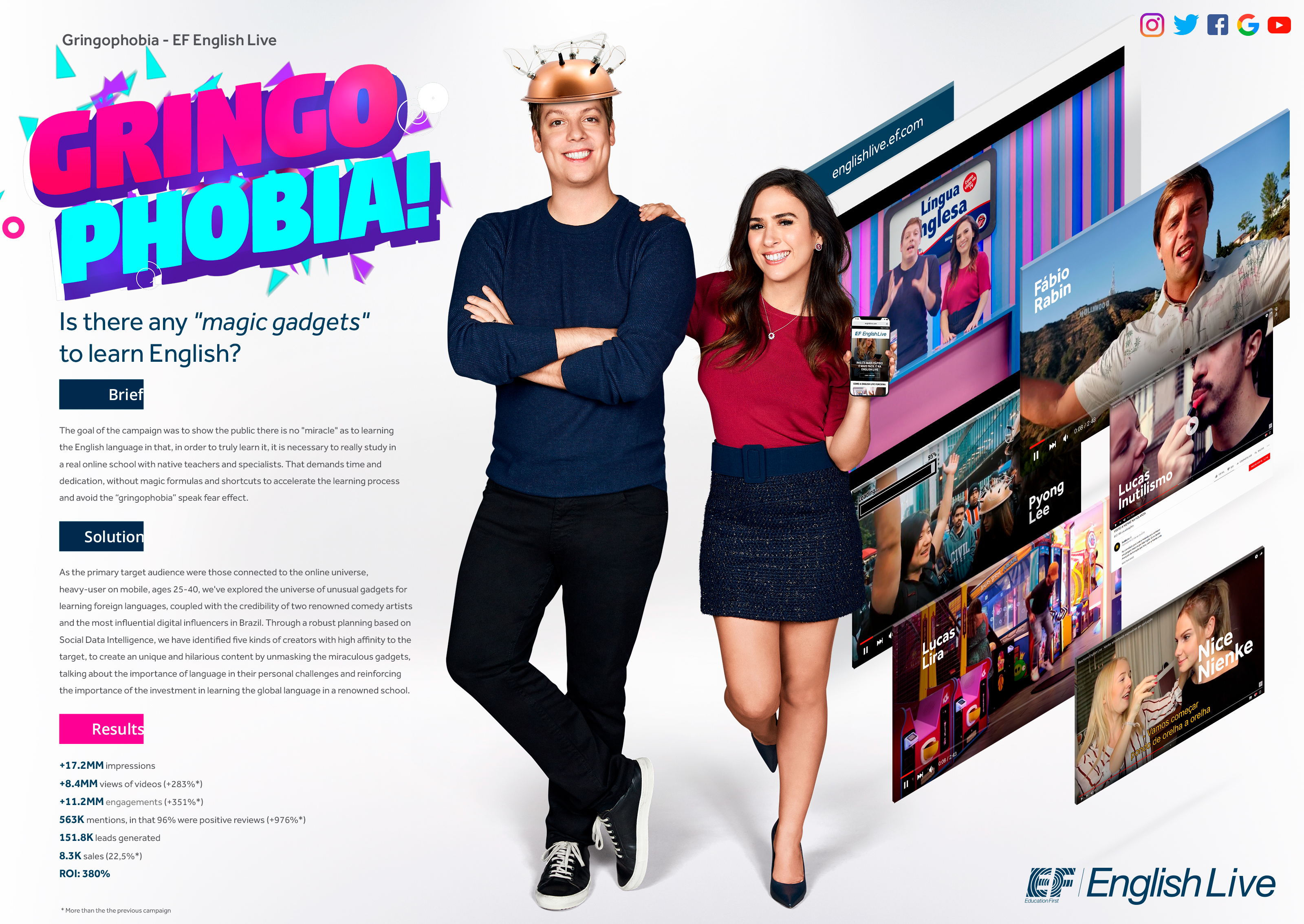