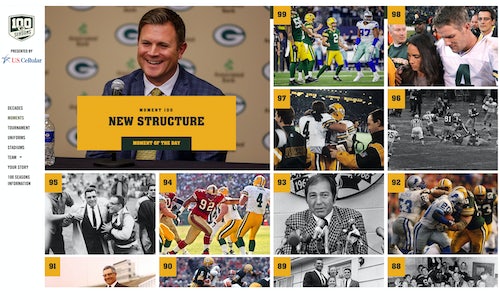 Ten decades have passed since the Green Bay Packers were first organized at a meeting in downtown Green Bay. Since that August day in 1919, the team's enduring success has become one of the greatest stories in sports history.

Over the course of 100 years, the franchise has given fans plenty to celebrate, with 13 world championships, 25 Pro Football Hall of Famers and a beloved home, Lambeau Field.

As a part of the digital marketing strategy, a microsite was created to tell the story of the Green Bay Packers in a way that catered to fans' relentless passion for the team.

An engaging experience, packers.com/100 features the club's rich history in a number of ways, including a page on each of the team's 10 decades, significant moments, the team's uniforms, historic stadiums and each of the 100 teams.

The microsite's celebration of the team's significant moments featured one moment highlighted each day for 100 days leading up to the regular-season opening weekend. Beginning June 1 and culminating on Sept. 8, each moment – in no particular order – looked back at a particular time in Packers history with a summary of what made it significant.

Daily social promotion led the efforts to engage with Packers fans, as well as persistent inclusion in the team's official mobile app.

Once all of the 100 moments were released, fans had the opportunity to engage in a season-long tournament in which the moments were placed in brackets, with a new portion of the brackets released each week. Beginning Week 1, fans began voting on their favorite moments, continually narrowing them down to a top, fan-chosen moment at the end of the season.

The microsite also invites fans to share their Packers story with the ability for a narrative and photo to be uploaded where other fans can view.

Fans are invited to celebrate 100 Seasons socially by using the hashtags #Packers100 and #PackersStory.

Digital and social engagement on the 100 Seasons campaign has been overwhelming. Fans of all ages have shown an interest in delving deep into the storied history of the team, from their passionate opinions about our curated list of "100 Moments" in team history, to their consumption of the more data-heavy features of the microsite, like our searchable database of every player in the history of the team.

Engagement with our interactive "Tournament" feature has been higher than anticipated, something that has kept the microsite campaign feeling alive from its launch on June 1 through today. The number of sessions per user we have seen rivals that of our main team website, packers.com. As we were conceptualizing content for the microsite, stickiness was a goal. We wanted to entice fans to continue coming back to the microsite with its sheer volume of content.

The affinity our fans feel for our team is something we sought to reward with this digital experience. It's viewed as our "coffee table" version of the history of the Green Bay Packers. 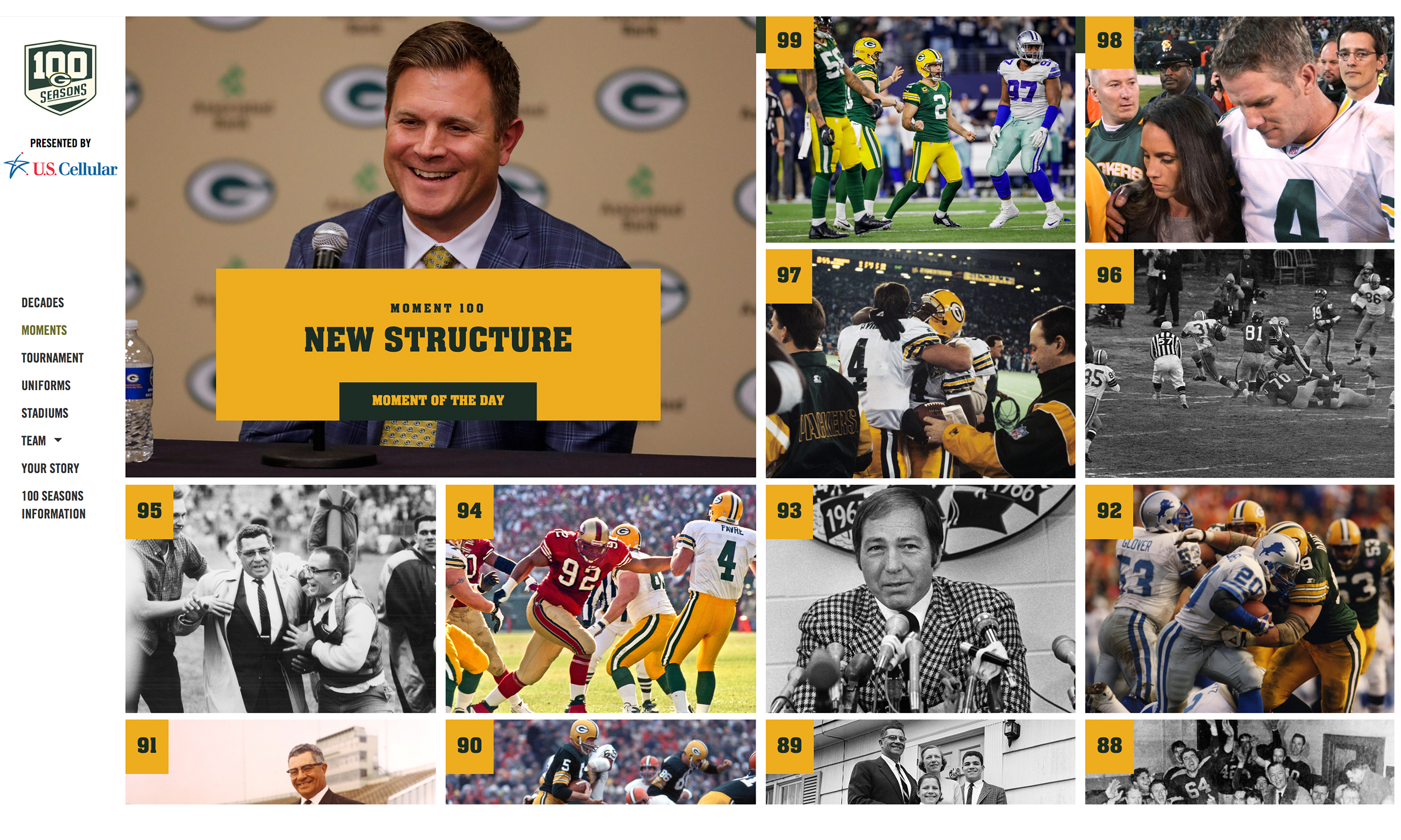 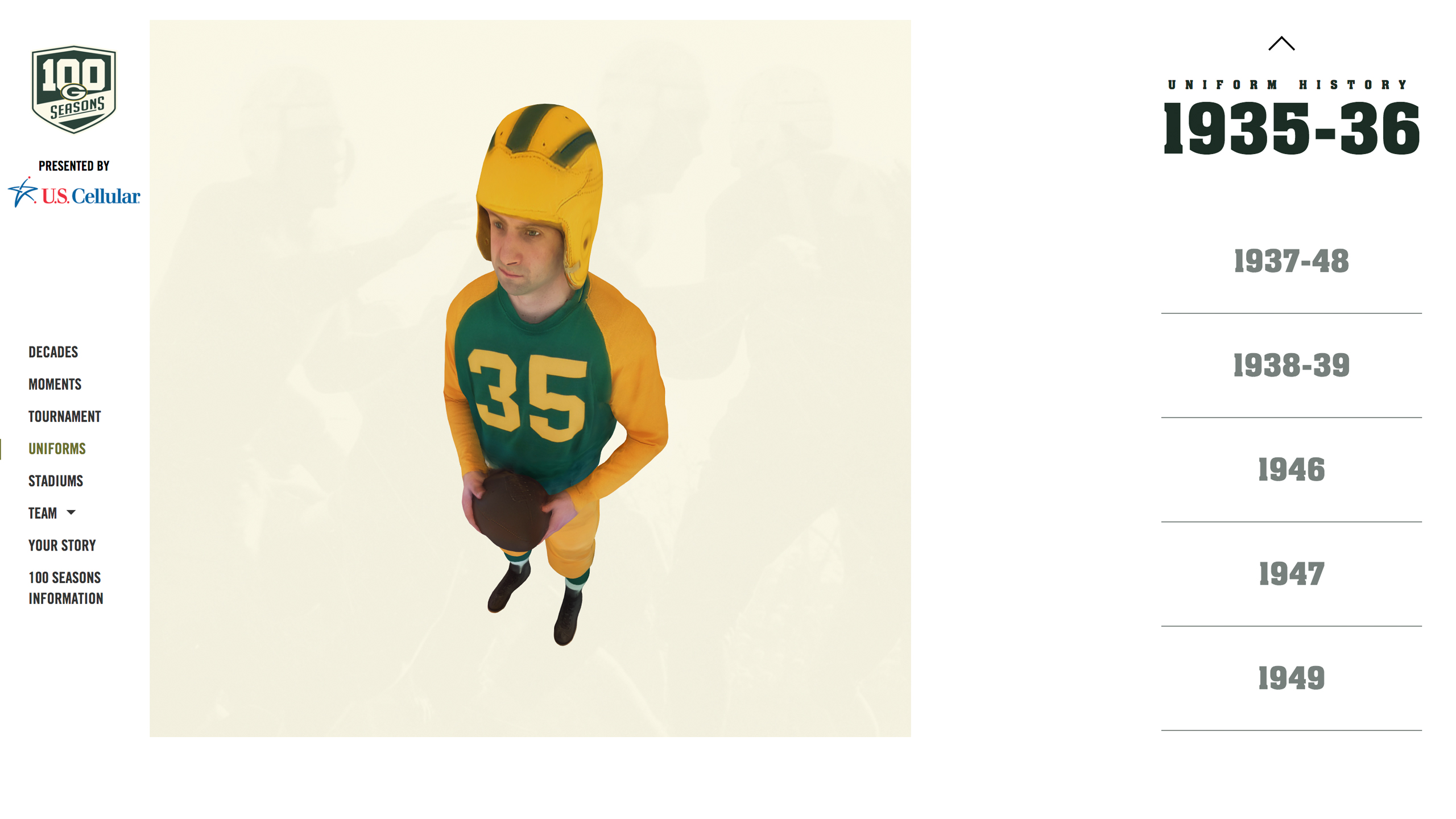 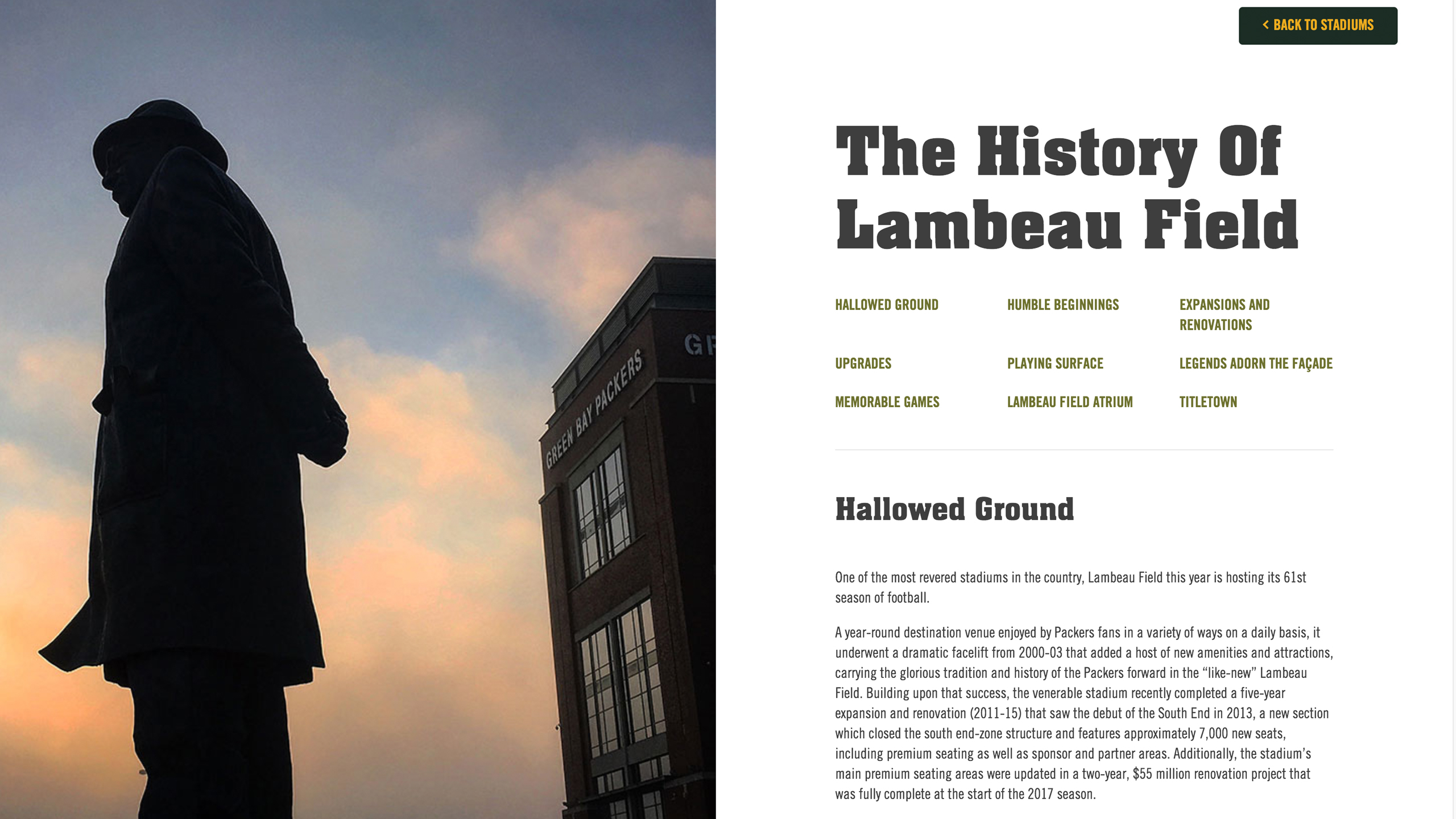 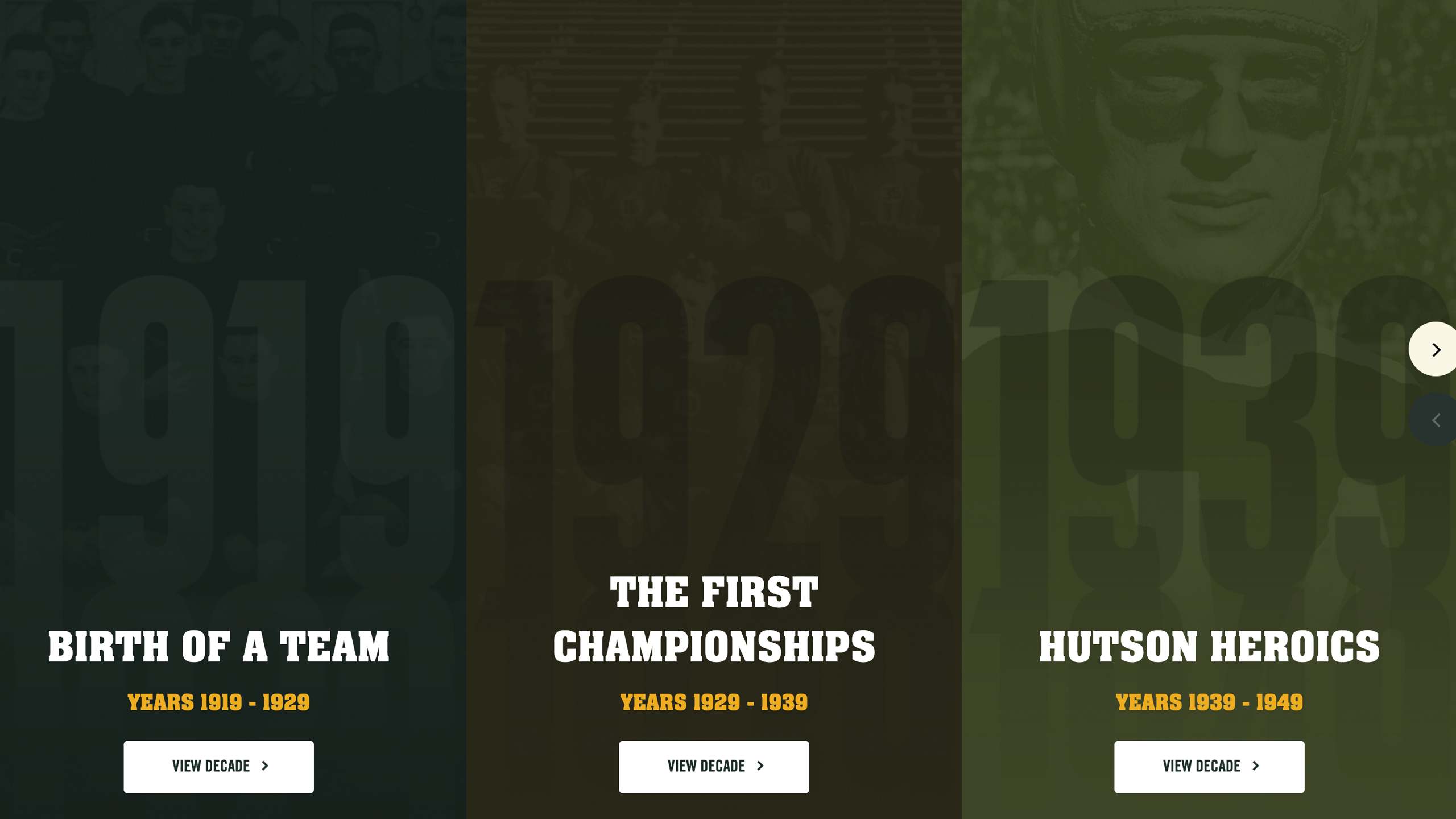 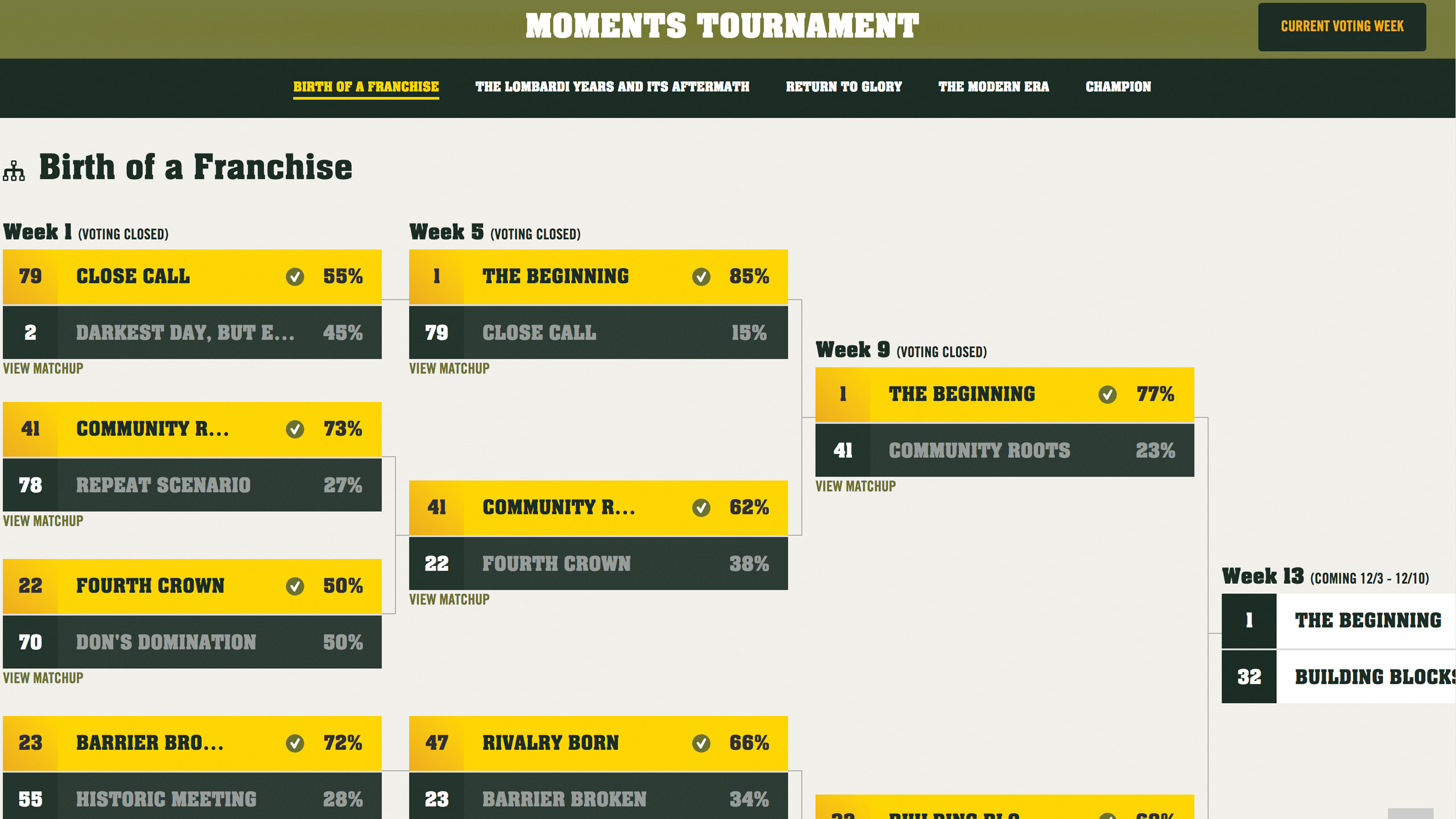 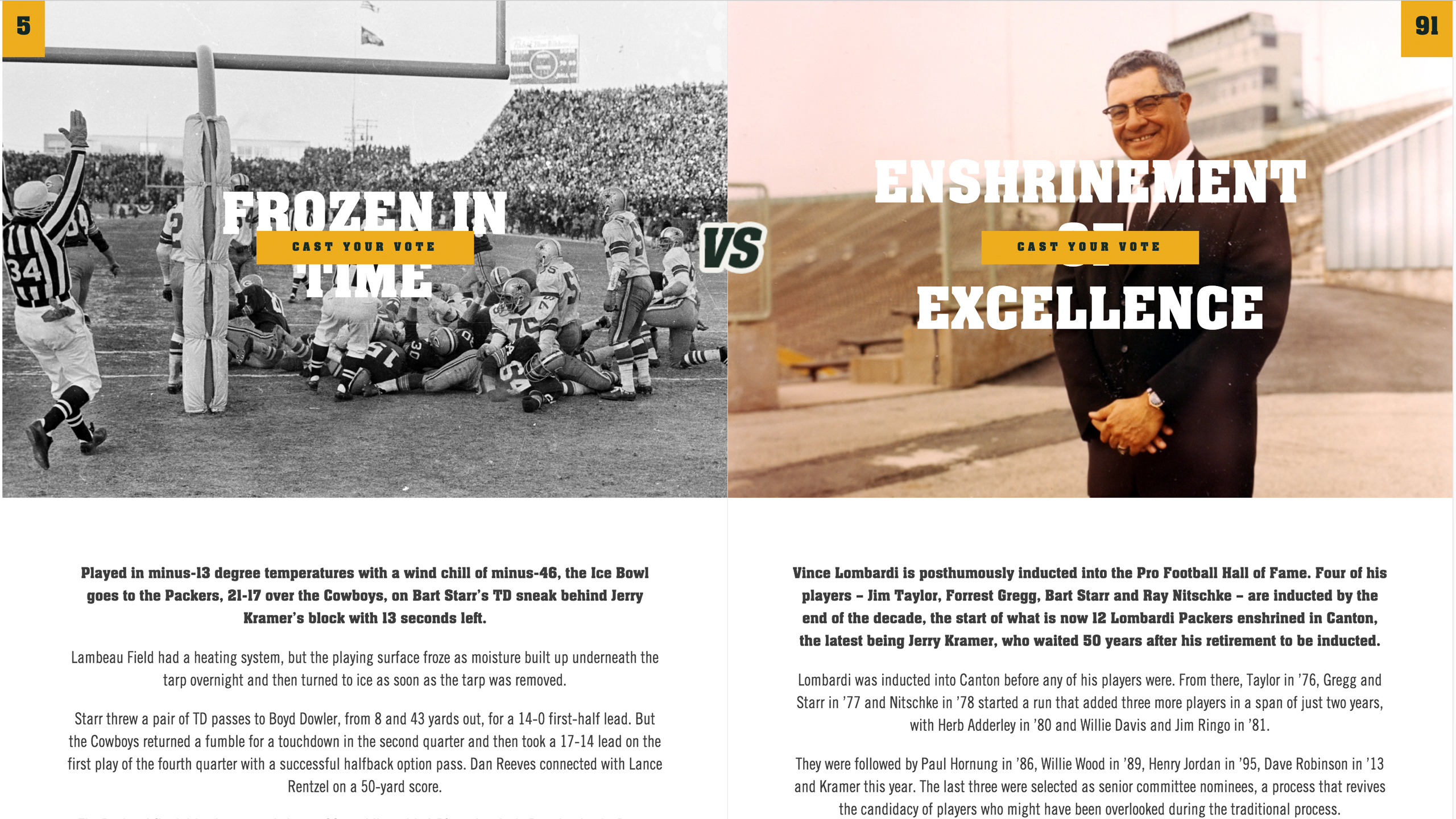 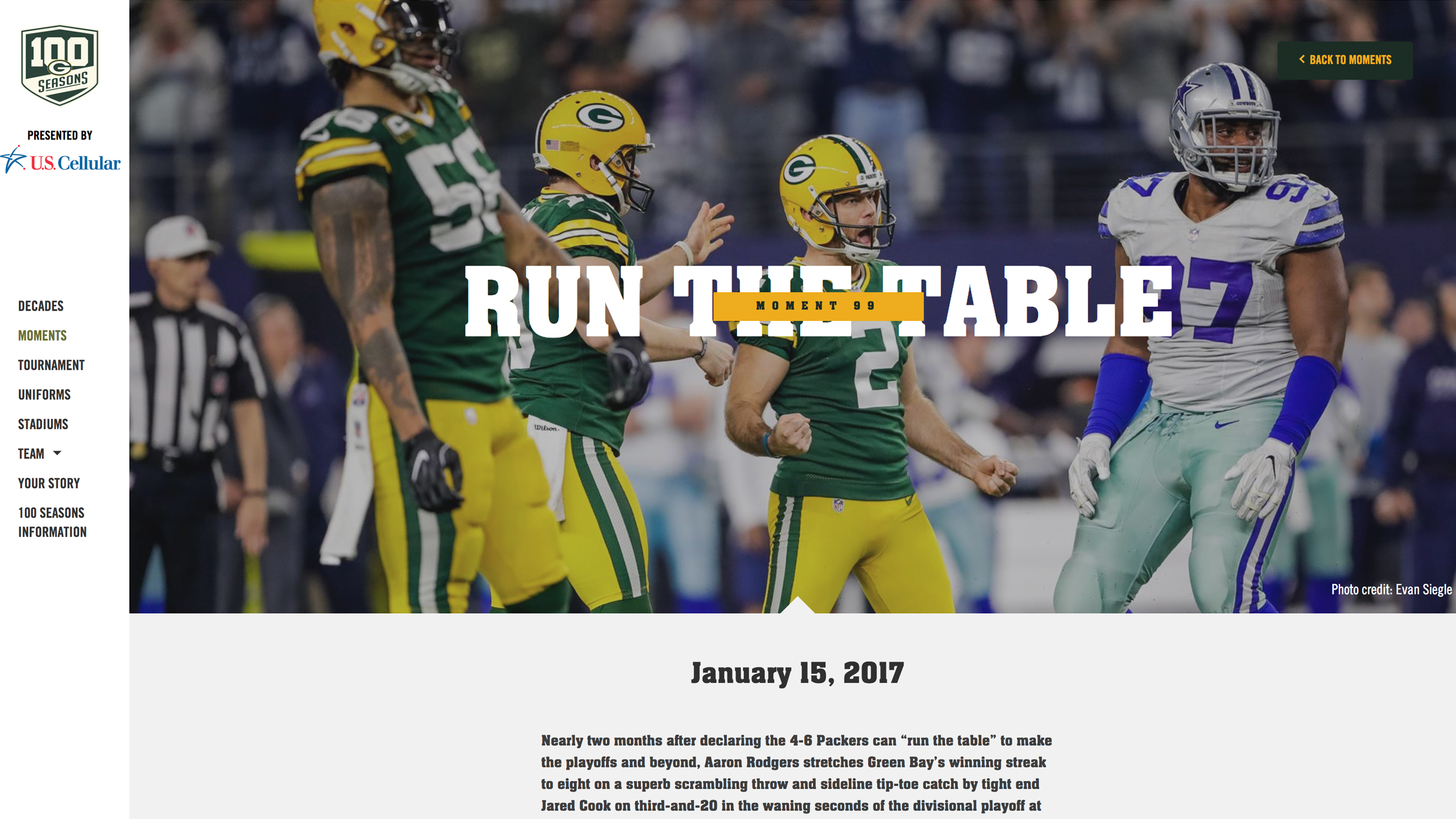 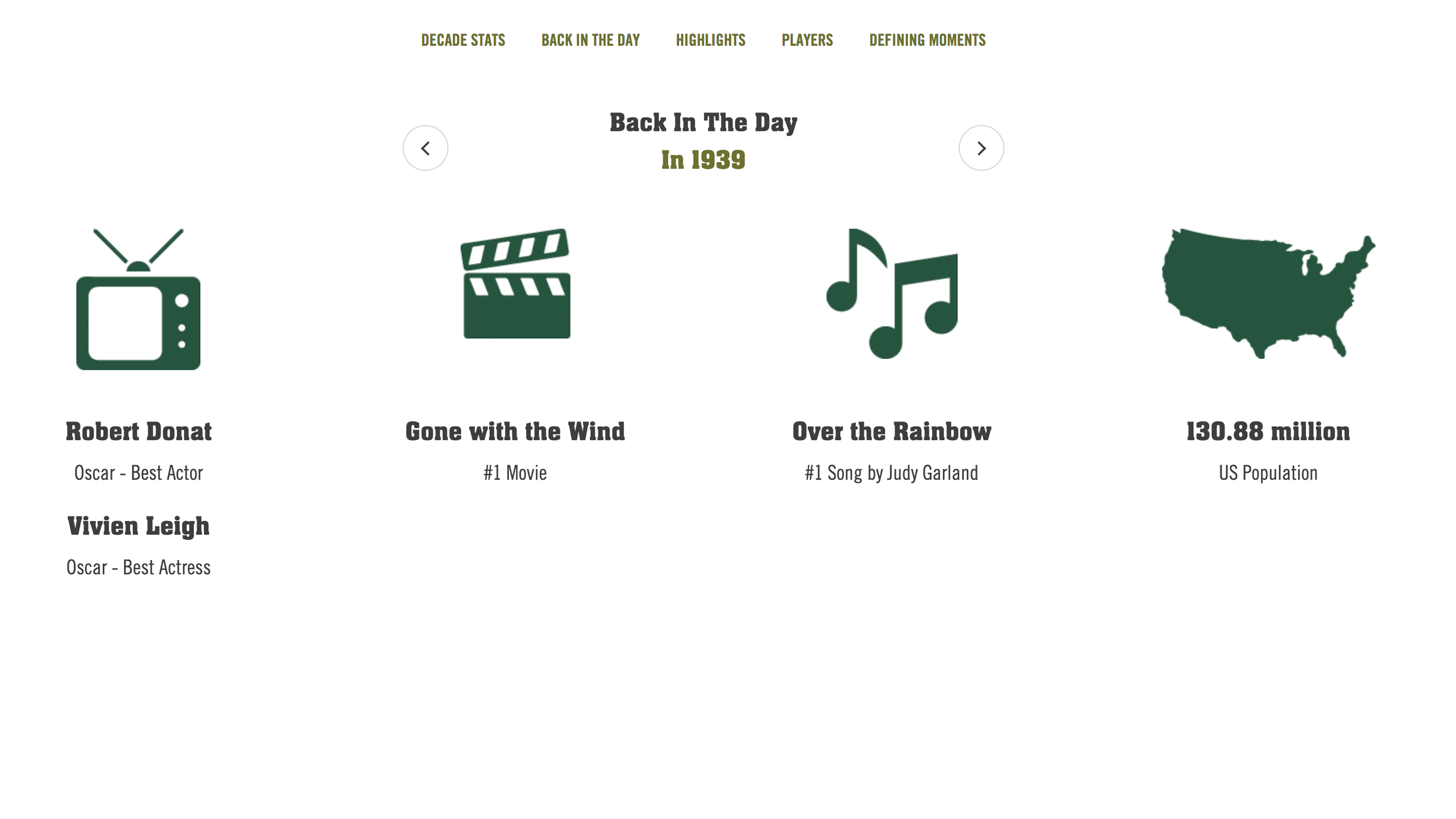 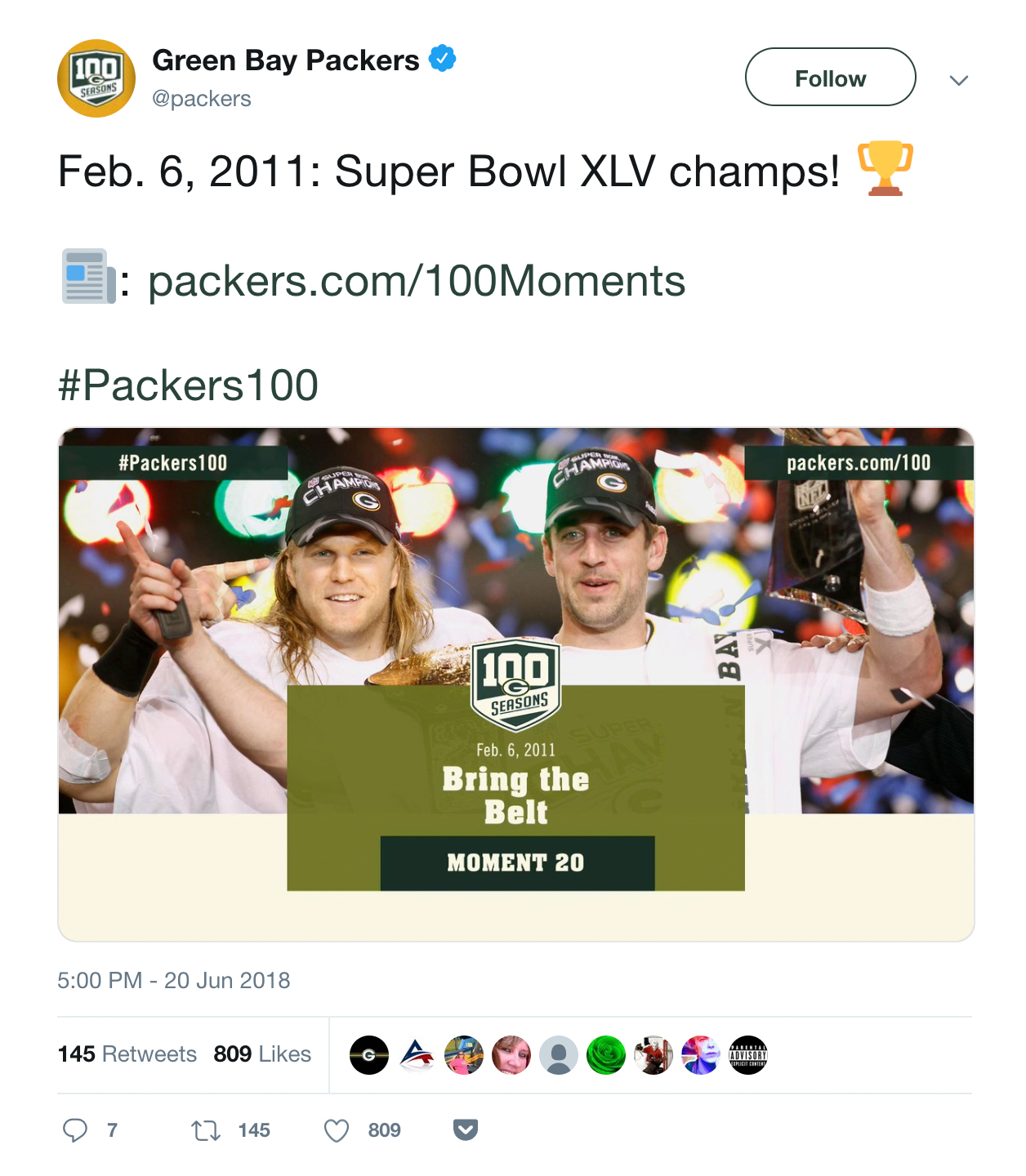 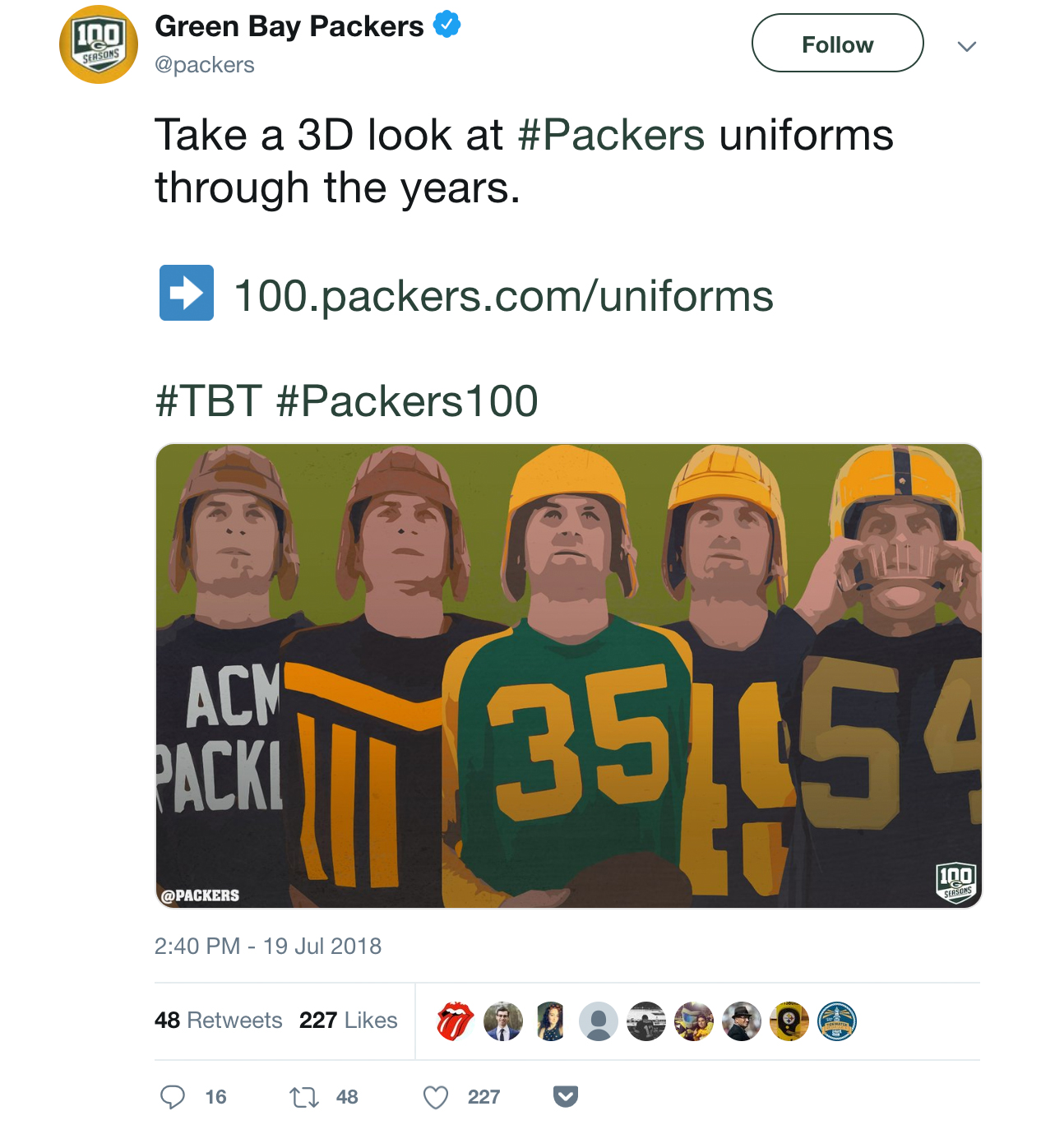