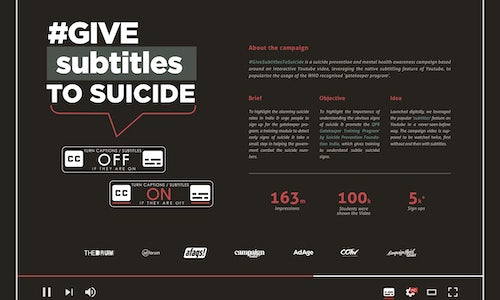 The objective of the campaign was simply to highlight the importance of understanding the obvious signs of suicide which we, many a times, tend to ignore and also to promote the 'QPR Gatekeeper Training Program' by Suicide Prevention Foundation India. The programme trains a person to identify people at the risk of suicide by recognizing early signs, providing necessary intervention and access to mental health services. We created a microsite too, to enable people to come and join the bandwidth and register for the program. The NGO also be conducted offline activities with various colleges to create awareness and educate students about the program.

We used the switching 'subtitles on/off' feature that is available openly on youtube. The video begins by announcing that it has to be watched twice.

First viewing is done with subtitles 'switched OFF' and shows a day in the life of a college group where one guy is suffering from mental issues and is being subject to jokes and jibes from his group while also not getting any support from anyone. There is a surprising end to the first viewing where a supposedly un-important character from the group ends up committing suicide unexpectedly.

Now the viewer is instructed to watch the same video with subtitles 'switched ON'.

Subtitles show the 'hidden' mental state of the friend who actually committed suicide. His distress and added trauma from the un-caring behaviour of his friends is read clearly in the subtitles. It looks like his suicide was avoidable if only there had been subtitles in the previous viewing.

In this unseen section we see a new reality where the distressed friend got support at the right time and his suicide was averted.

The video now asks the viewer to sign-up for the Gatekeeper Program i.e. AFTER showing the possibility and effectiveness in a positive and creative manner.

The big innovation was the use of 'subtitles' in a never-before-seen way. It was effective for two reasons - > interactive as well as cost-effective (i.e. free to use)

Insight came from the realization that often everyone is 'surprised' and in 'shock' at learning 'who' it is that committed suicide. Add to that the medical data that says suicide-incidence is not a one-off or a sudden decision but is a culmination of many mis-steps and mis-fortunes. It became clear that all the signs that are being shown by the one in distress are either going un-noticed OR are being ignored by peers for fear of not knowing how to address such a sensitive life event.

We identified the 'subtitles' feature popular on youtube and OTT platforms as the best way to convey 'read what you cannot yet understand' and made that feature a stand-in/metaphor for learning the Gatekeeper Program.

The video was screened to 100,000 students in IIT through partnership with Suicide prevention Foundation India

5000 sign-ups for Gatekeeper Program in a week.

Many colleges signed up for conducting the Gatekeeper program in their premises.

IIT being at the helm of the issue, as per government reports, IIT Bombay partnered with Suicide Prevention of India foundation for its Techfest where the theme was Speak: Stand to express, to talk about various prevention methods, major reasons of suicides etc. 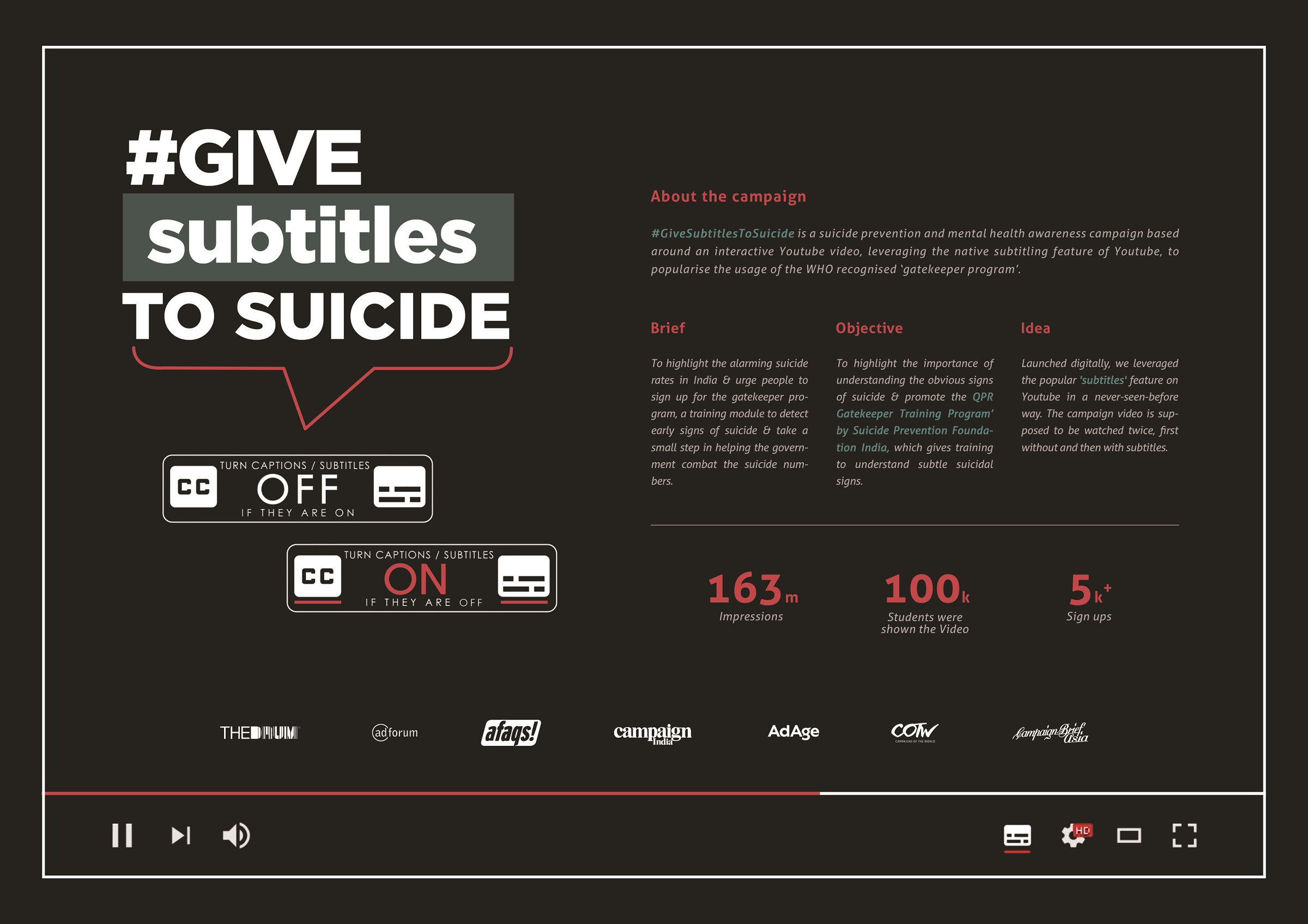