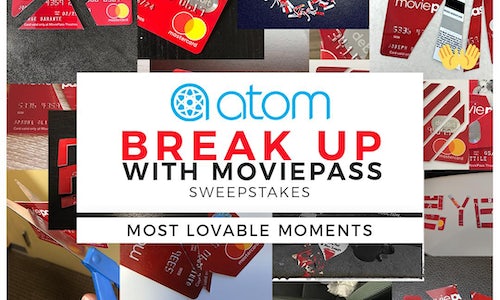 Audience Honor in Contest or Promotion

By Summer of 2018, the Atom Tickets team was following the many MoviePass member complaints across all forms of media about repeated technical outages, blockbuster blackouts, price changes and general disappointment with the service. These were serious concerns and we wanted to make sure those users (the movie fans) knew that there was another movie ticketing service out there that could be trusted as a good partner. We wanted to make movie fans feel good about going to the movies again. We thought this would be an opportune time to capitalize on the mounting frustrations and come up with an innovative way to conquest MoviePass customers.

"Being able to watch a movie shouldn't feel like roulette." [email protected] said about MoviePass

The Atom Tickets marketing team developed a concept that supported the idea of conquesting MoviePass customers that got their members to respond along with the media.

On July 31, Atom Tickets announced the great "Break Up With Moviepass Sweepstakes" for heart broken movie fans. Through Atom's social handles, we asked members send us pictures of their cut-up MoviePass cards with #MoviePast for a chance to win a free year of movies. Entries could also be mailed in. Additionally, we created a promo code that was open to all movie lovers that offered a free ticket with their purchase of a ticket on the Atom Tickets mobile app using the code WEGOTYOU.

Atom issued a press release to let the media know about this program and help spread the word.

1000 entries flooded in digitally and physically. With little time and almost no money, we received 200 million earned impressions. We also promoted via paid channels on social media with negligible cost.

Media reaction was quick to tap into the unique twist of our campaign, saying:

"Atom Tickets, smelling blood in the water, launched a contest encouraging customers of the flailing MoviePass service to cancel their memberships for a chance to win one year of free movie tickets." (Variety)

"To rub further salt into the company's wounds, Atom Tickets, smelling an opportunity, recently announced a Break Up With MoviePass sweepstakes, offering MoviePass customers a chance to win a year's worth of free Atom tickets if they canceled their MoviePass account." (Forbes)

"Clearly Atom Tickets is taking advantage of MoviePass' recent misfortunes by enticing MoviePass subscribers to cut ties with that service and hop aboard the Atom Tickets train." (Cinemablend)

Fan reactions were immediate and positive:

The campaign struck a chord. As a result of our efforts, we saw great success in driving social and industry buzz. For the promotion, we relied upon Facebook and Twitter to share the news. We read so many social posts from movie fans that said they loved the sweepstakes idea and even more that posted their pictures (see photos). 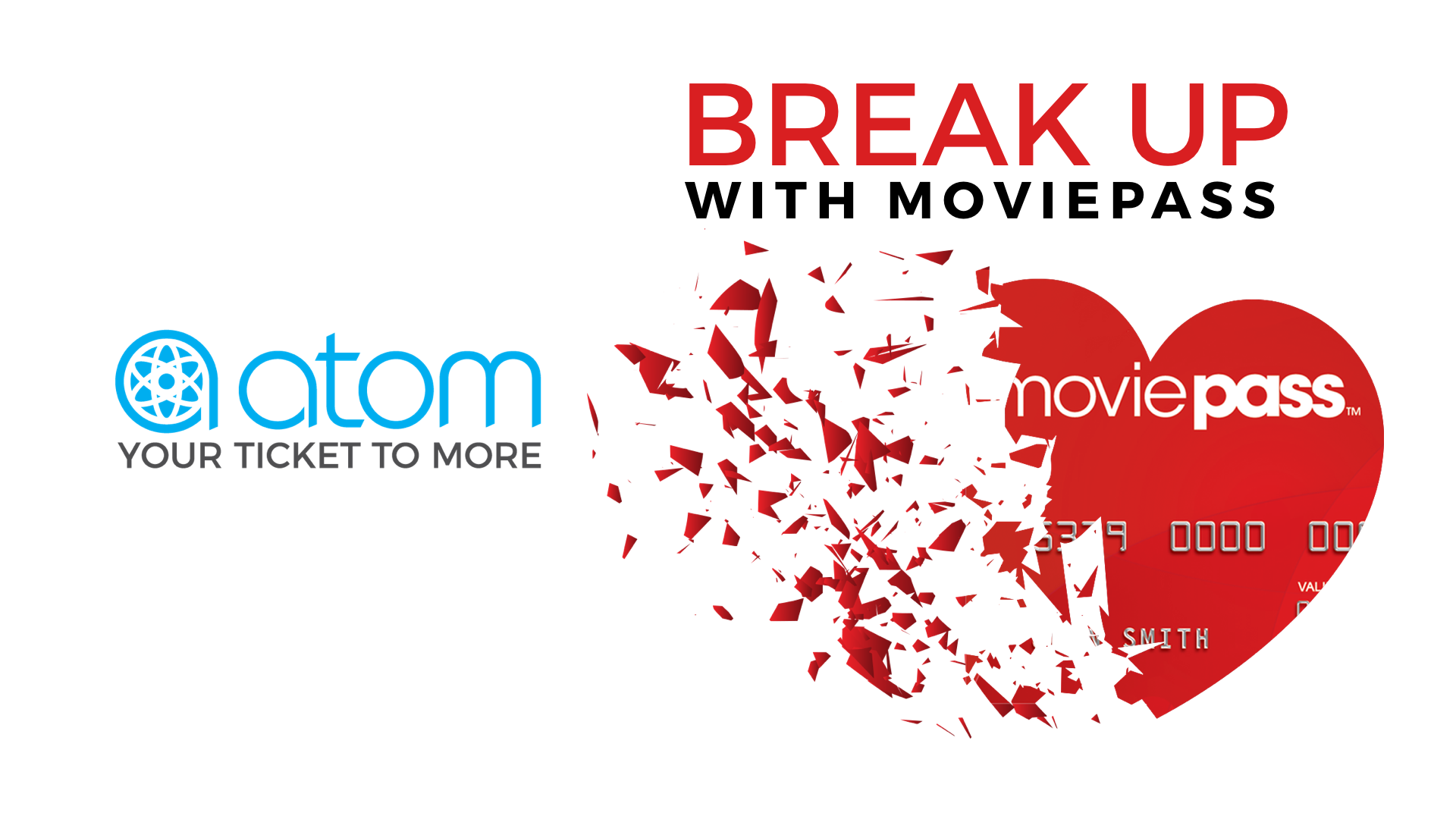 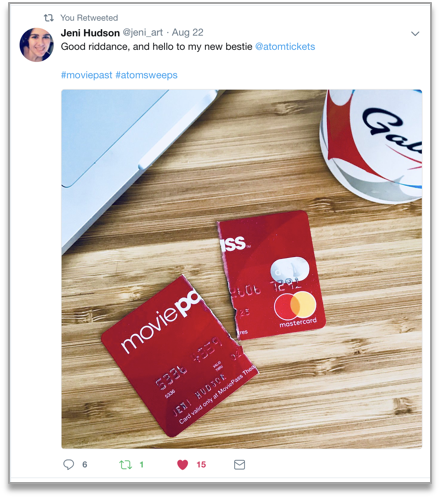 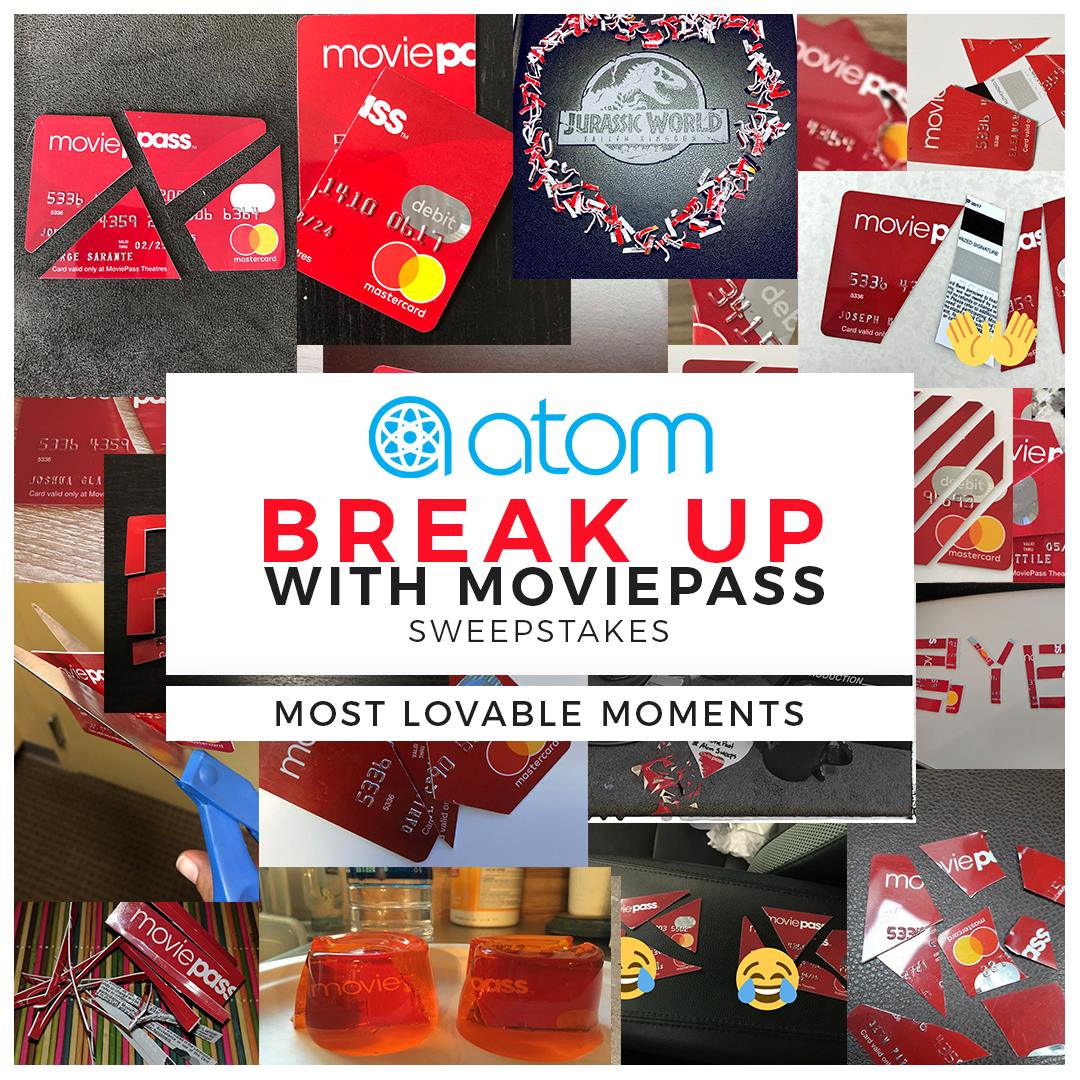