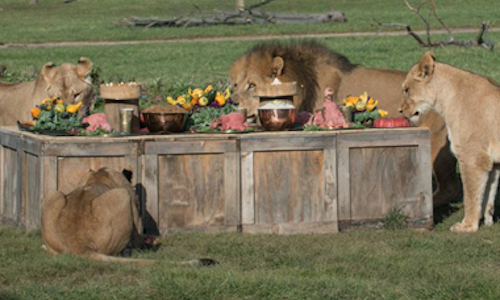 Savage Kingdom on Nat Geo Wild follows the epic struggle for survival among families of lions, hyenas and wild dogs in the African Savute. In order to drive viewers and word of mouth for the premiere of Season 2, we set out to highlight the human characteristics of these animals and show how similar family dynamics can be, even in the wild. The aim was to reach a younger audience with our campaign, target viewers who might not be the typical audience for this type of show and make sure the series stood out from the pack of similar wildlife shows.

How could we bring the emotional power of the series to life by highlighting the universal themes of family conflicts, generational clashes and rich characterization of the animals that anyone can identify with? Each episode features incredible footage and drama as powerful as any human story found on TV. What would would help reveal the similarities of the animal world with the universal, human themes and family strife occurring around the world every day? With the first episode premiering on Black Friday, just after Thanksgiving we wanted to shine a light on the all-too-similar interactions that take place at family dinners across species - both human and animal.

Knowing the week of Thanksgiving was a perfect opportunity to take advantage of the country's focus on family dinners, complicated relationships and less-than-civil ineractions, we devised an impressive Thanksgiving feast of our own to bring attention to Savage Kingdom. Before the rush of holiday travel, people are stuck at work, grinding out the last few days before they gather with family around the table. We knew that people would be looking for something entertaining to kill time at work and that they'd have food on the brain. We found a way to connect the fraught family dynamics of Thanksgiving with the human storylines found in Savage Kingdom. What better way to remind people of our animalistic urges than to unleash a family of lions on a bountiful Thanksgiving meal and see what happens. In partnership with the world-famous Columbus Zoo we set the table and invited a pride of lions to show us their savage side.

Working quickly to tackle all the complicated logistics, we set our production in the middle of the Heart of Africa exhibit at the zoo where the lions currently reside. There, among the rolling hills, we worked together with Telecope to create a four-camera, live broadcast setup with prime viewing positions around the lion display to stream the meal on Facebook Live for worldwide viewing on mobile and desktop.

Telescope's real time solutions helped us gamify the event with a variety of graphics, similar to what viewers would see during a sporting event – using applications such as: title graphics, on-air comments, interactive polls to make viewers a part of the action. This included achievement badges for the lions' activity, headshots of each lion with name, height, weight and other factoids that we could incorporate into the broadcast in real-time.

We asked users to weigh in on the menu, predict what food our guests would eat first and even used a starting lineup graphic to introduce the wild participants. Lion experts were on hand to provide real-time insight and respond to user comments from the Facebook feed, answered back on-screen with our custom lower third graphics and tickers.

Picture in picture and even graphics showcasing the recipes for certain dishes provided an in-depth experience capturing all of the action as we answered all of the audience's questions. Leading up to the release of the lions we built tension, showing the zookeepers setting the table and placing the last elements before dinner time. Moments before the big event, we ran an exclusive promo for Savage Kingdom to get fans' adrenaline pumping before we unleashed the lions on their meal.

We incorporated the show's intense score during the feeding as well as live-audio from within the exhibit to heighten the drama. On Tuesday 11/21, just two days before Thanksgiving, we delivered a livestream built to appeal with the kind of content the Internet yearns for.

Our timely Facebook live stream was a massive success for the premiere of season 2 and the larger Nat Geo Wild brand at large. The lions proved up to the task as they devoured the food, toppled the centerpieces and rewarded eager fans with highlight reel interactions. Amidst plenty of growls, snarled warnings and swipes of their claws, the animals showcased their savage side and destroyed the feast appropriately. One lioness even walked away with a gold plate! We broadcast all the action from 4 intimate camera angles and a bonus GoPro positioned in a tree -- only barely out of reach of the pride!

The high-quality production values and rare look at pride dynamics during feeding time hooked our audience and propelled the live-stream to more than 596k views and a reach of almost 2 million people. Our viewers engaged with 8.2k+ reactions, 1.4k+ shares, 3.9k+ comments and generated a sizeable audience for the season premiere just a couple days later.

This commentary on the traditions of family dinners resonated across the Internet, with #SavageThanksgiving trending during our one-hour live stream. ABC News visited us at the Columbus Zoo and ran a story about the unusual event, earning air-time for our client and a chance to talk to a wider audience about the stunt and Savage Kingdom itself with awareness for Thanksgiving dinner peaking. We reached existing fans of the show, branched out to new demographics and even got a re-tweet from celebrity chef Gordon Ramsay. 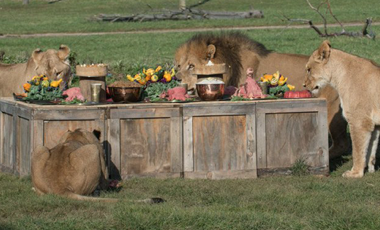