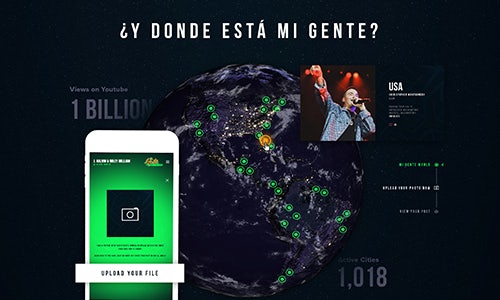 "'Mi Gente' is a song that embodies a special moment in music – a new sound of a Latino culture on the rise and being embraced globally. By erasing barriers of races, colors, continents, genres or languages, we can achieve the whole world moving their head to the same beat. We hope 'Mi Gente' can provide that beat." -- J Balvin

Rising to the top on the Global Spotify Charts, and claiming a stake within the most watched videos on YouTube, the single "Mi Gente" has spearheaded a revolution in the music industry through the voices of Colombian singer J Balvin and French DJ Willy William.

After a successful release of the hit single and video, "Mi Gente" rapidly became a worldwide phenomenon. The impact of the song reached new heights in the music industry through its power of connecting people from all parts of the world. Universal Music Latin Entertainment wanted to demonstrate just how global it had become.

Hashtags have become a second nature when adding caption to social posts. It has the ability to unite content across the globe through a centralized trend which connects people from all parts of the world and inspires them to share their own interpretations of it.

As "Mi Gente" gained recognition and fame across the globe, with it came the #MiGente trend. No longer just a hashtag associated with a song, it has been adopted by our generation to embody its culture. The beauty of it is the universal interpretation that extends beyond race, country, and language.

Fueled by this universal appeal, we sought to create an experience that connected people globally, allowing them to interact with the song and also share it with the world.

¿Y dónde está mi gente? [And where are my people?] Come and see for yourself at MiGente.world

As soon as you enter the site you are brought into the immersive world of "Mi Gente", warmly greeted by the undeniably catchy song by J Balvin and Willy Williams.

The impressively designed website features a live feed that houses photos and videos that have been shared using the #MiGente hashtag in the form of a interactive, rotating globe. You can see green pin points all around the globe which signify each unique post, and when clicked on, can view the actual post that was shared and its city of origin.

Users can also take and/or upload their own photo with an exclusive "Mi Gente" filter-- a feature made specifically for fans to engage with the song and share it with the world. Once a photo has been uploaded, the user is prompted to share their photo along with pre-populated text to help guide them on what caption to add to their post including a personal message, the #migente hashtag, and their city.

Other cool features that can be found on the top navigation are the live stats of the song & video's virality, content about the song, and the Mi Gente Video embedded directly into the website.

It's truly impressive to be able to see the song's global impact. People from complete opposite ends of the world are sharing videos of themselves dancing to the song. It gives you a sense of being connected to the world.

Since the launch of the MiGente.world experience, there has been over 431K #migente photos and videos shared on social media from 3,017 cities and a total of 134 countries.

As we celebrated the site's launch in October 2017, we were blown away by how much the globe continued to populate with pinpoints covering up some parts of the map around the world.

In less than a week, fans generated over 15K images related to the song through the custom photo frame feature on MiGente.world.

MiGente.world was visited by over 134 different countries with impressive engagement metrics – an average of 7 pages viewed per session, average session duration of 4 minutes and 20% bounce rate! Acquisition to MiGente.world was completely unpaid, coming primarily from social media. Thanks to J Balvin's Instagram stories and posts – owned media contributed to 87% of users who visited the site! 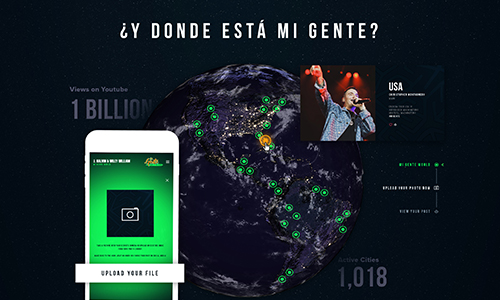 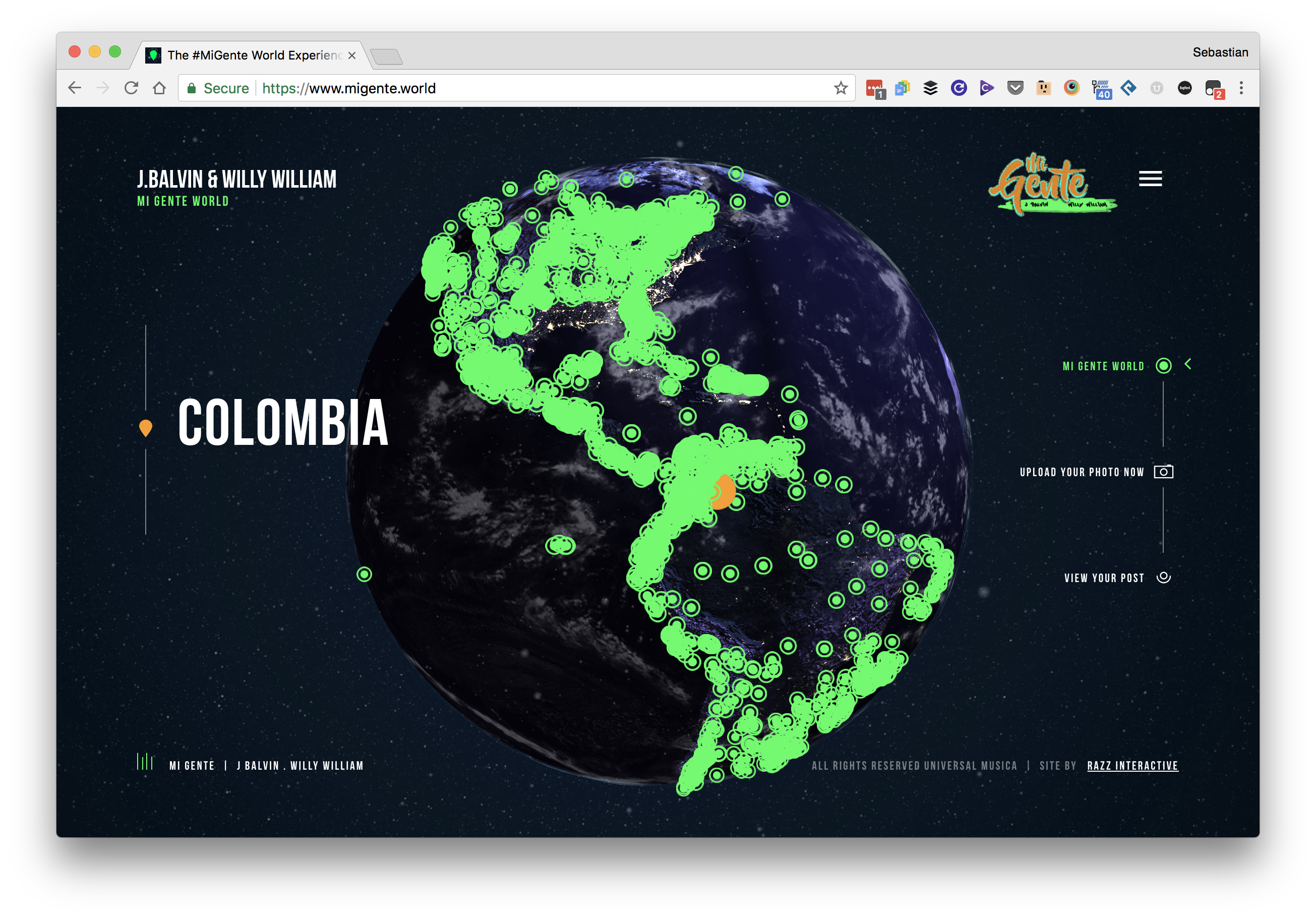 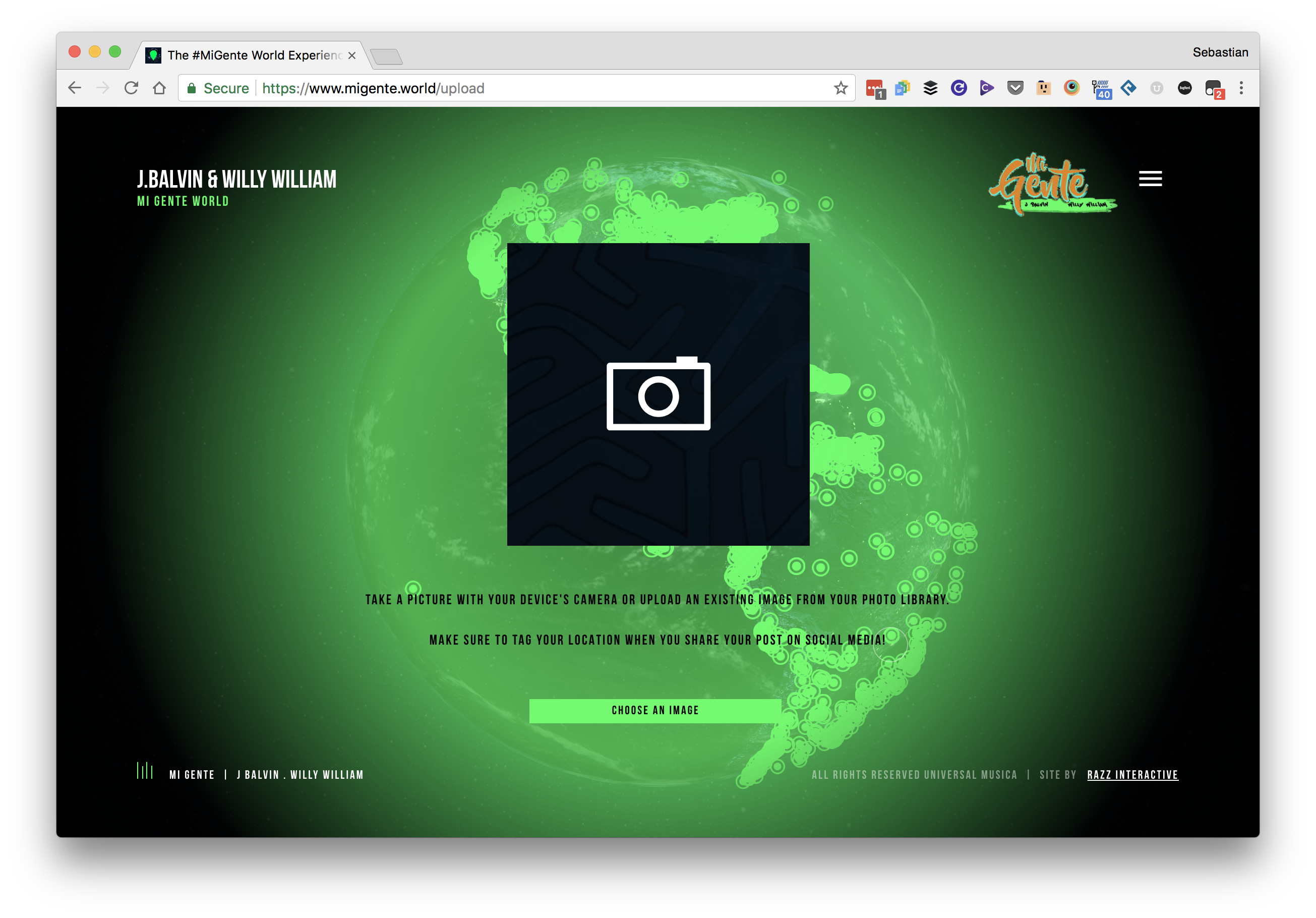 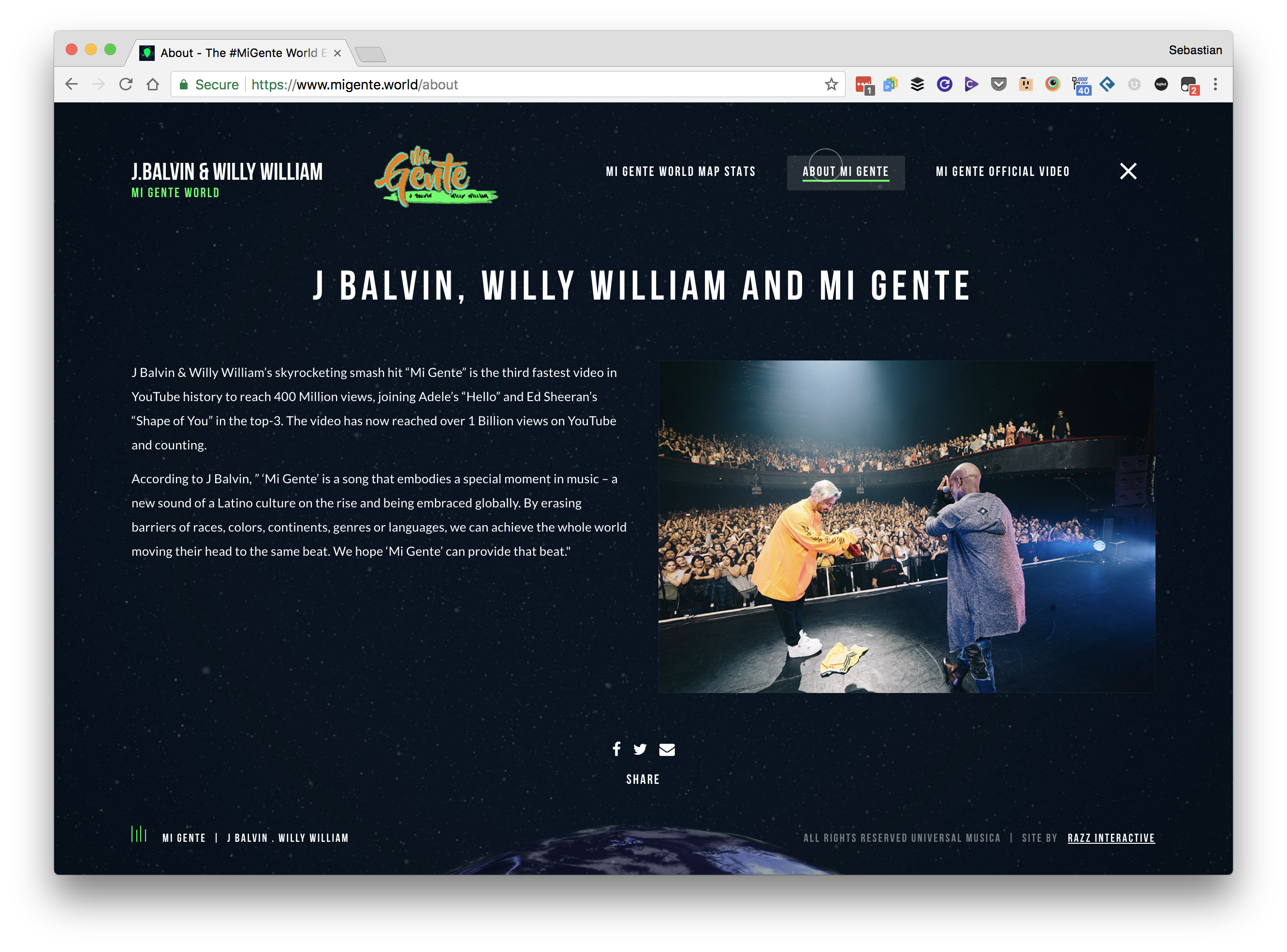 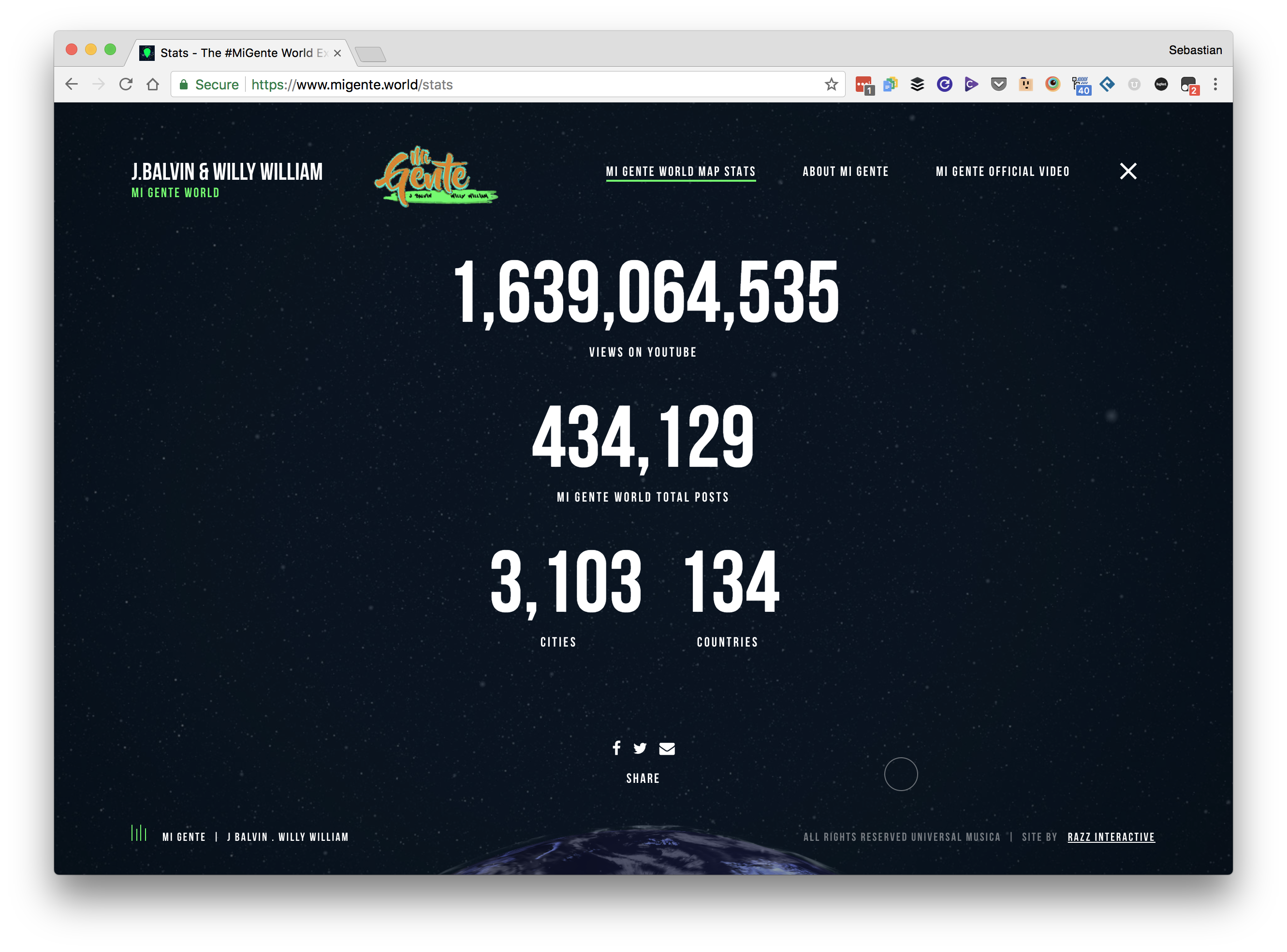 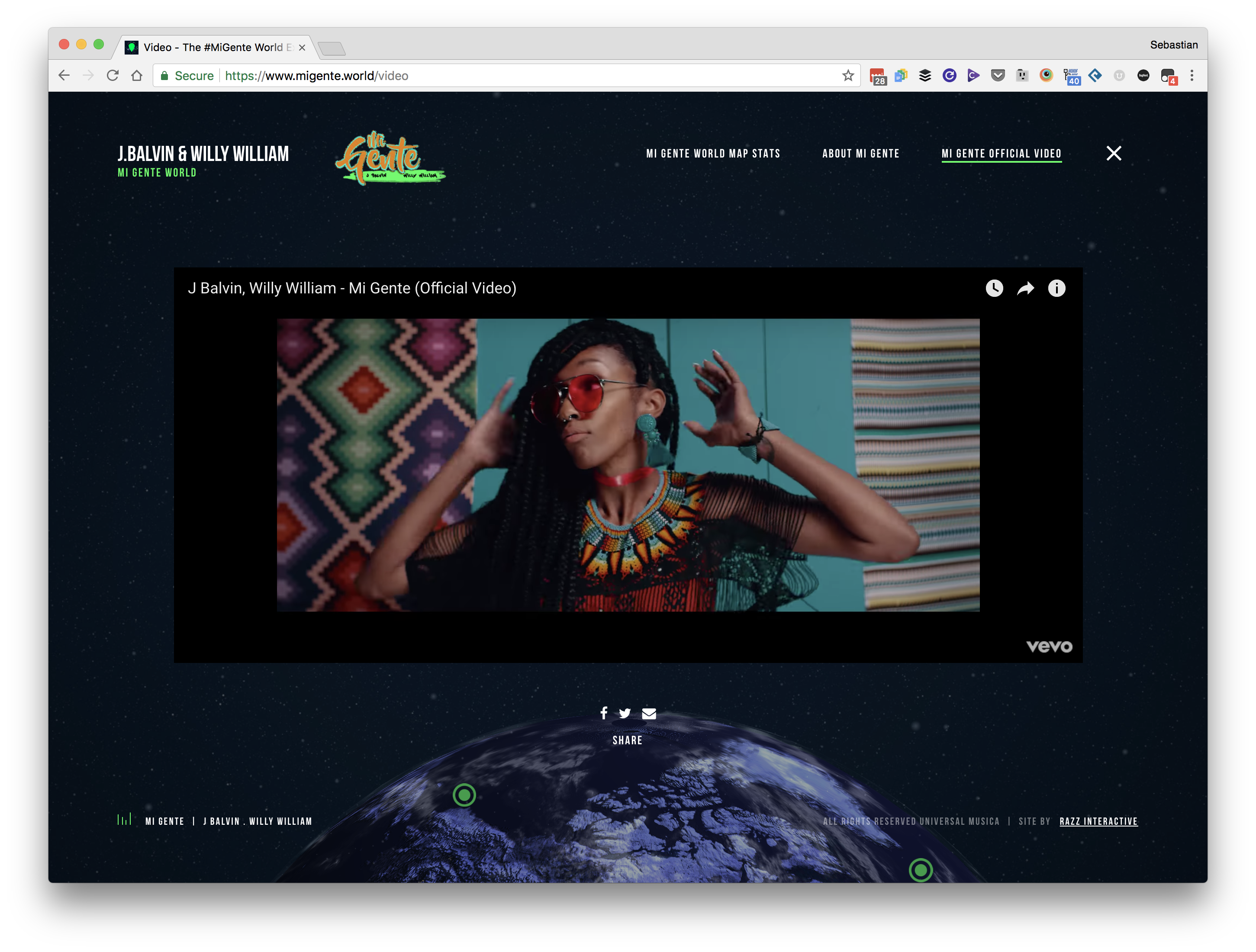 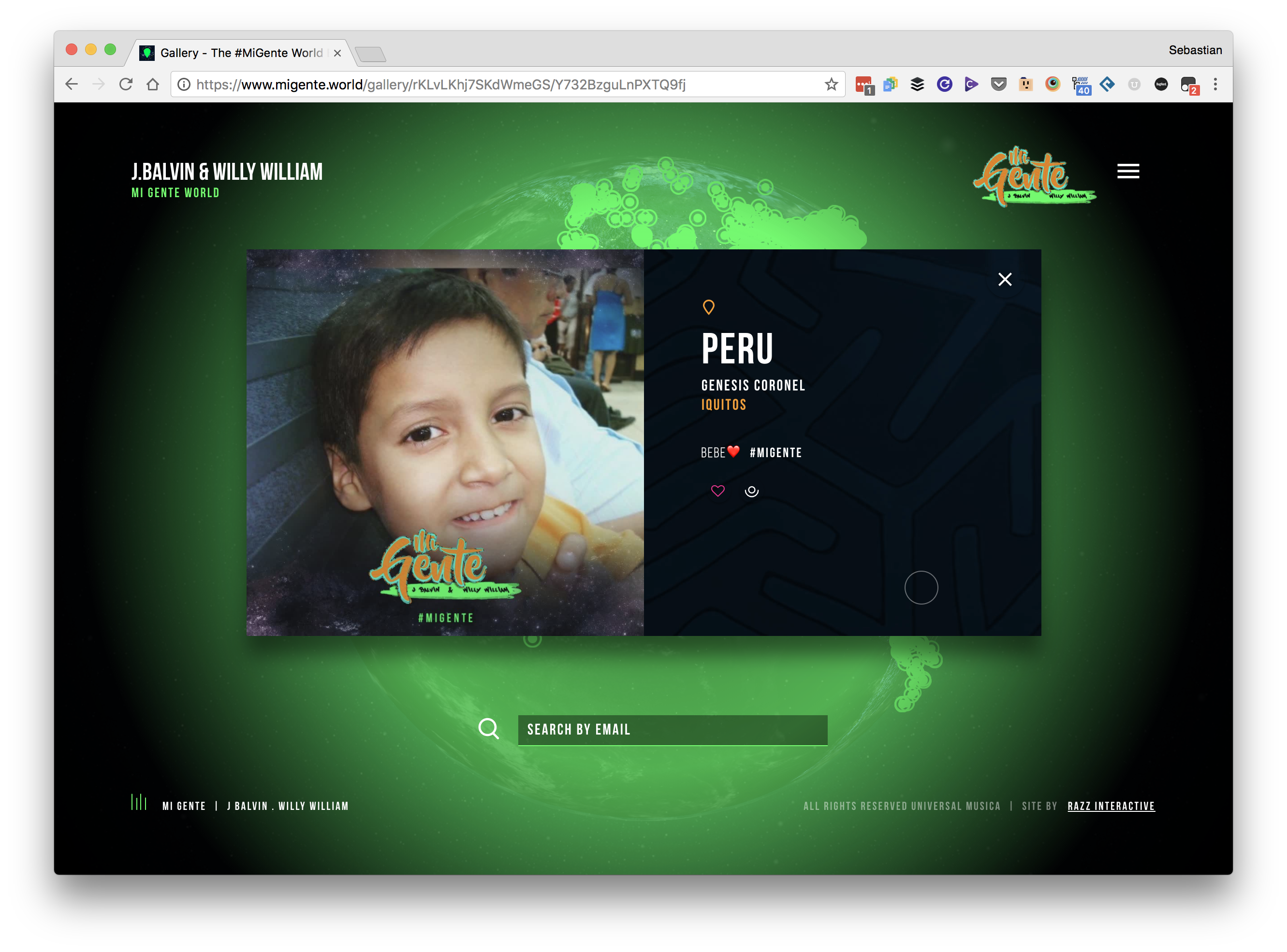 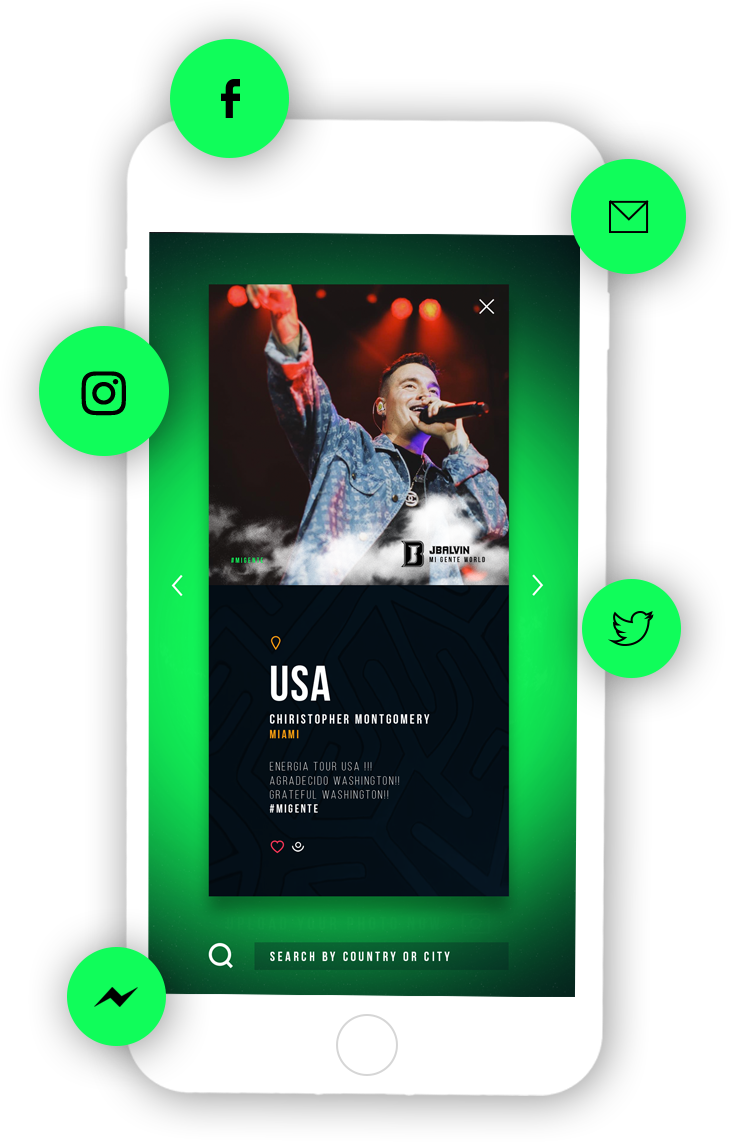 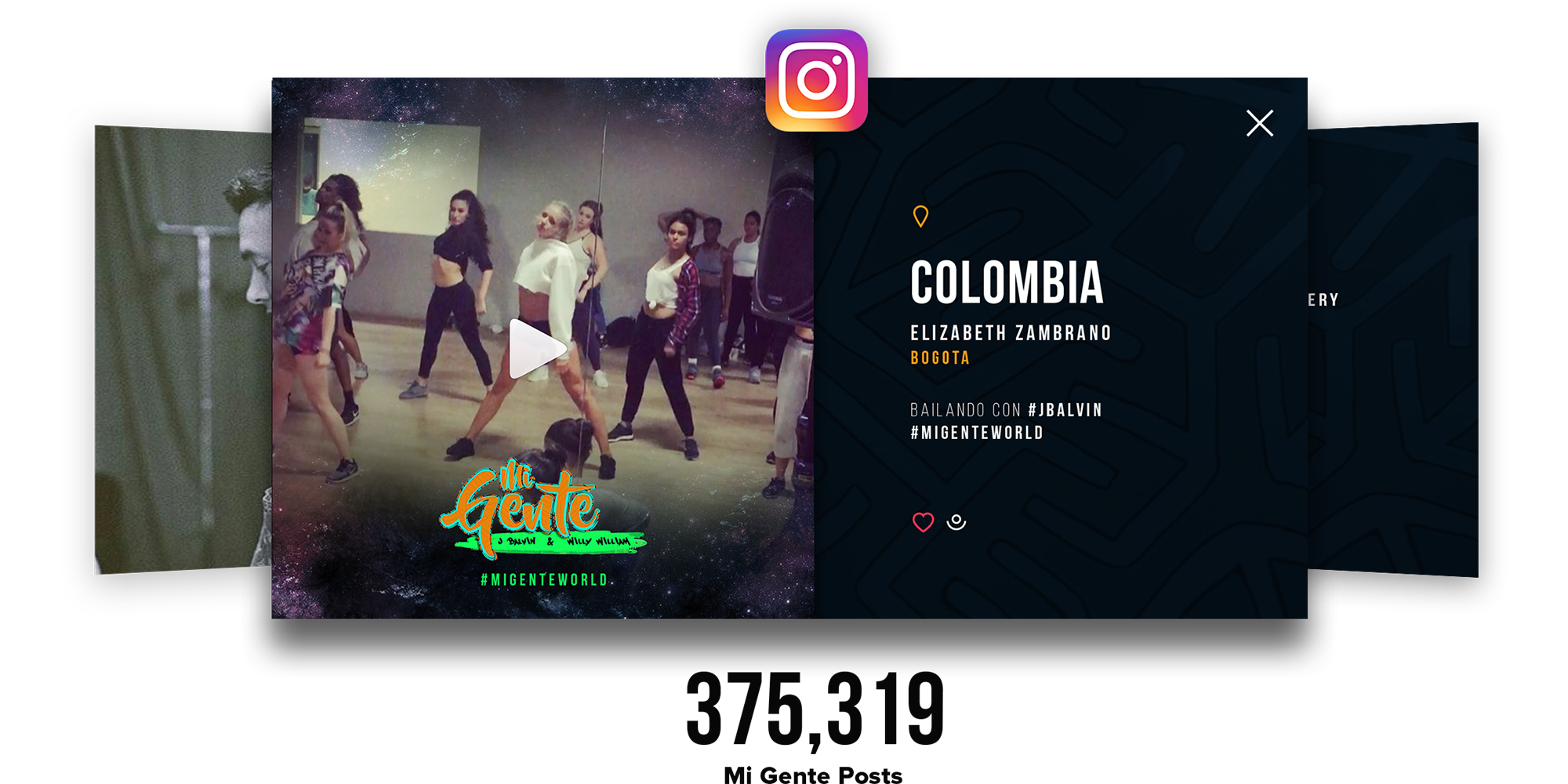 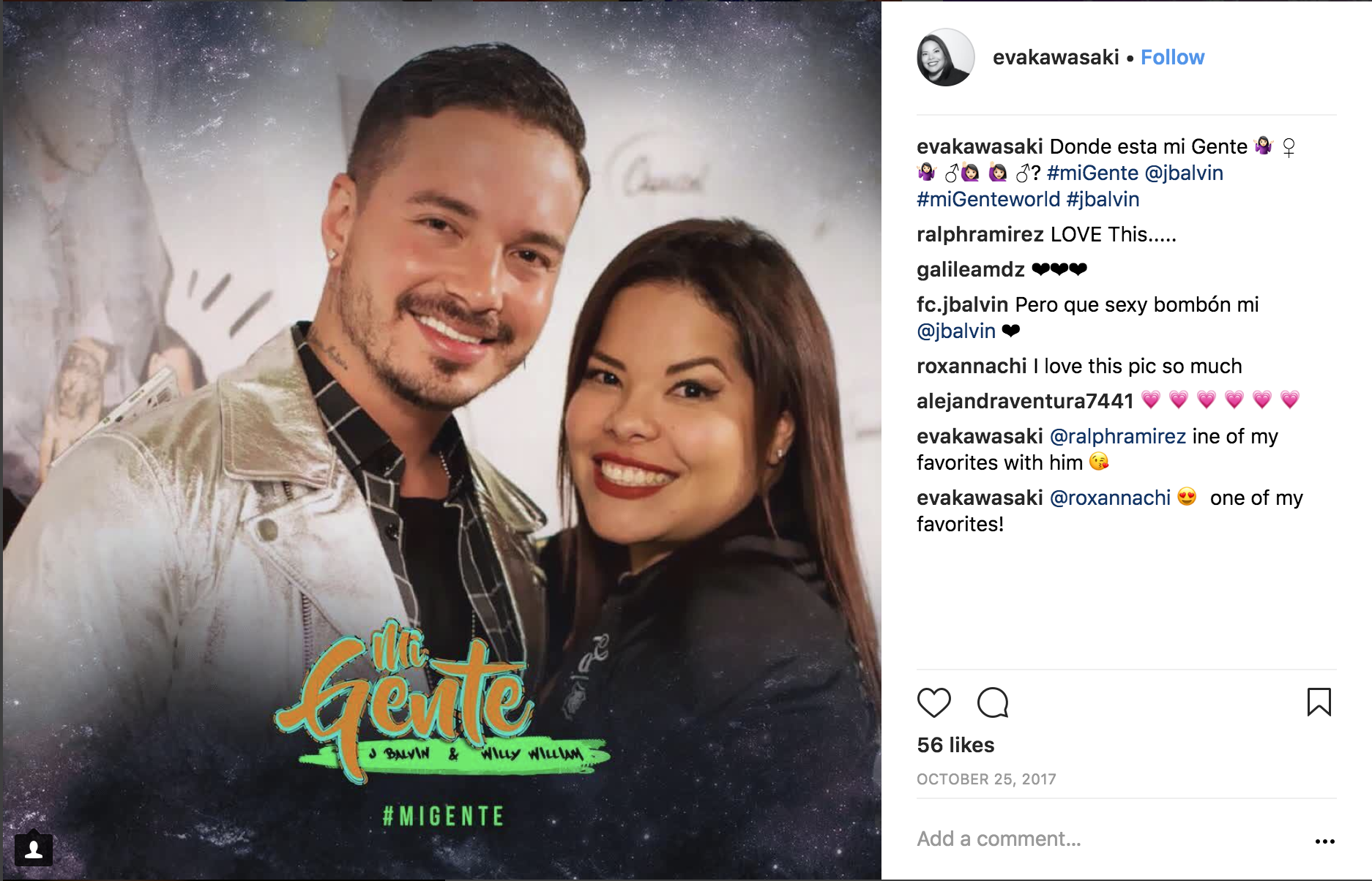 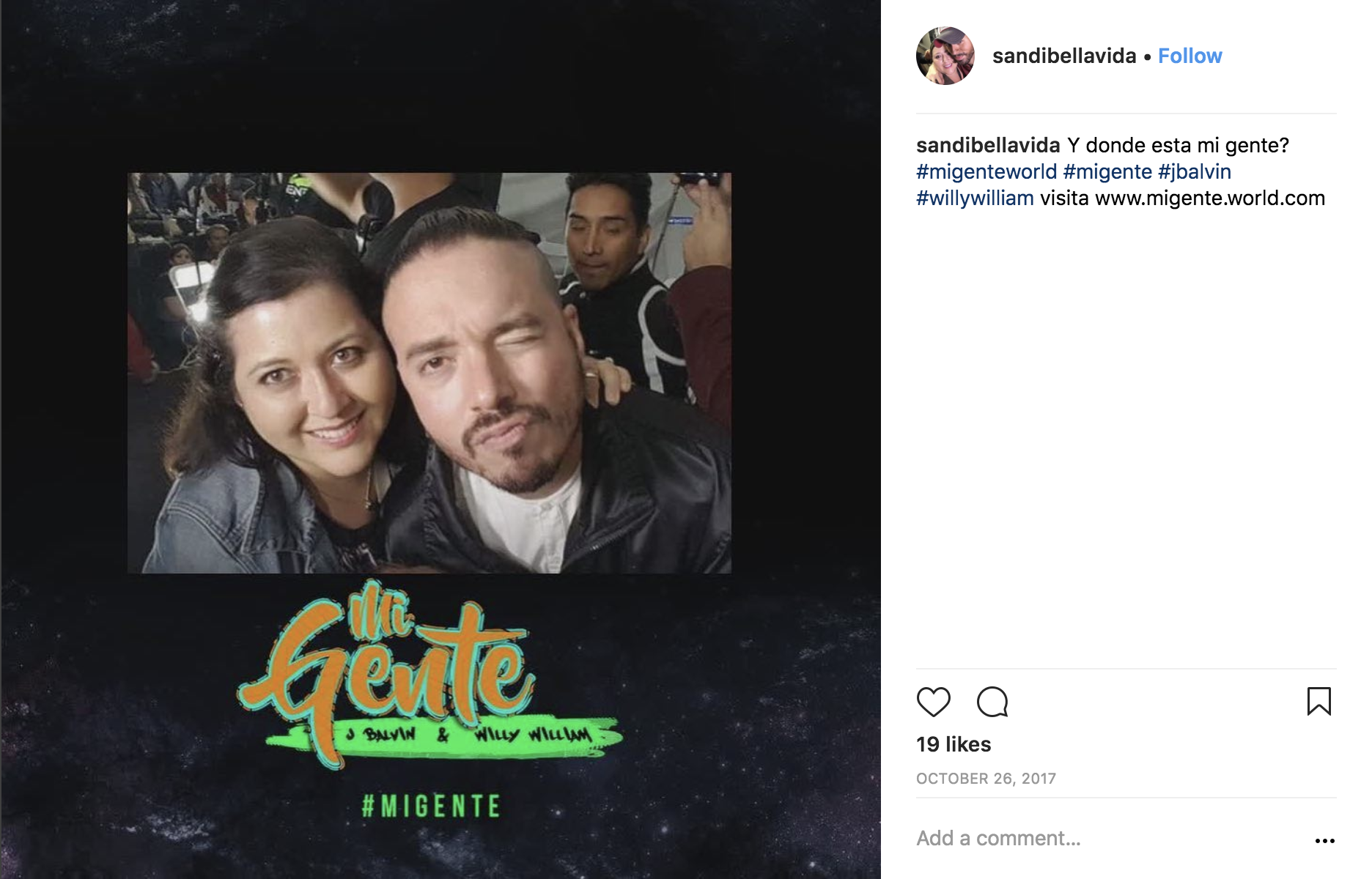 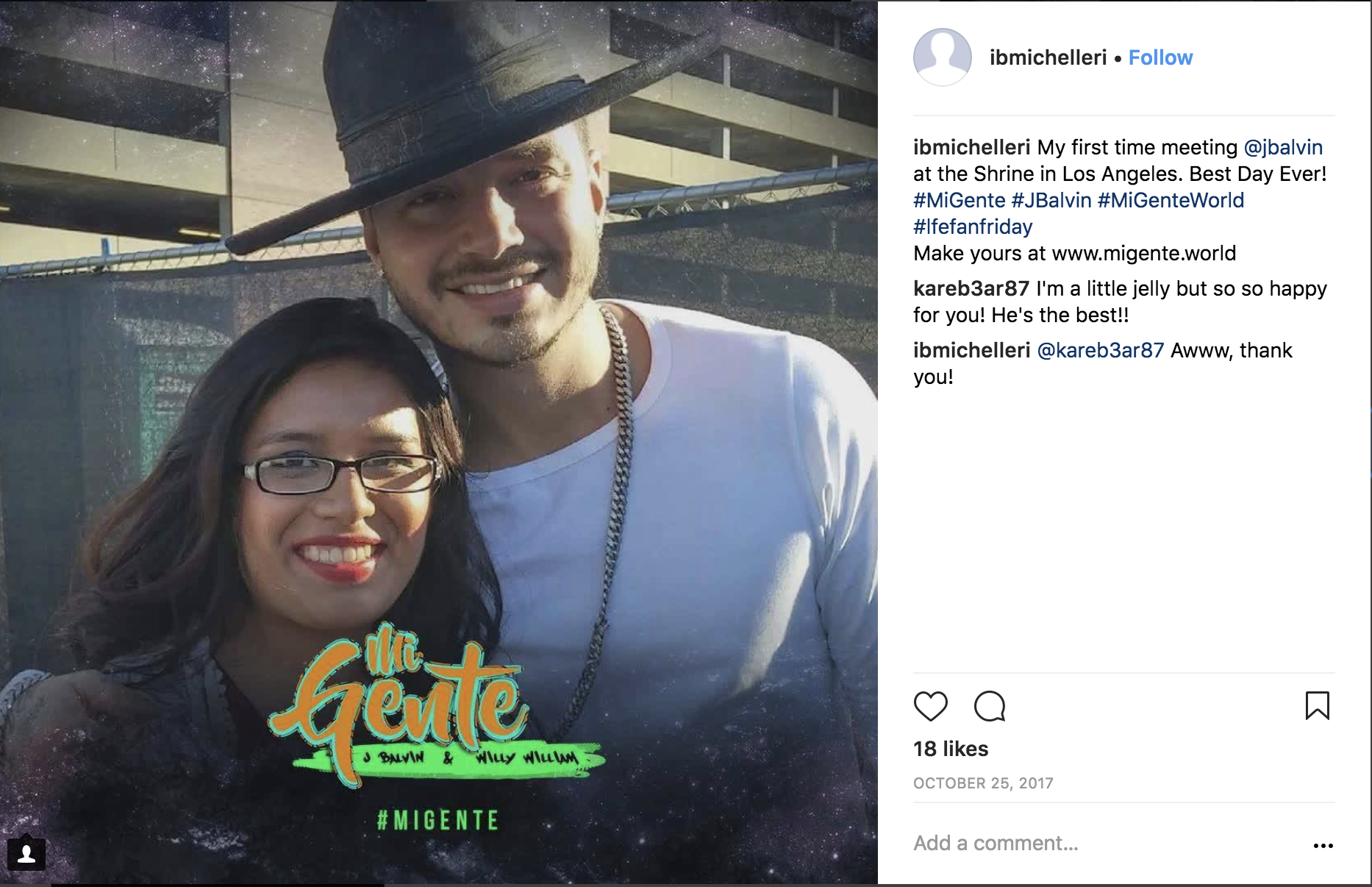 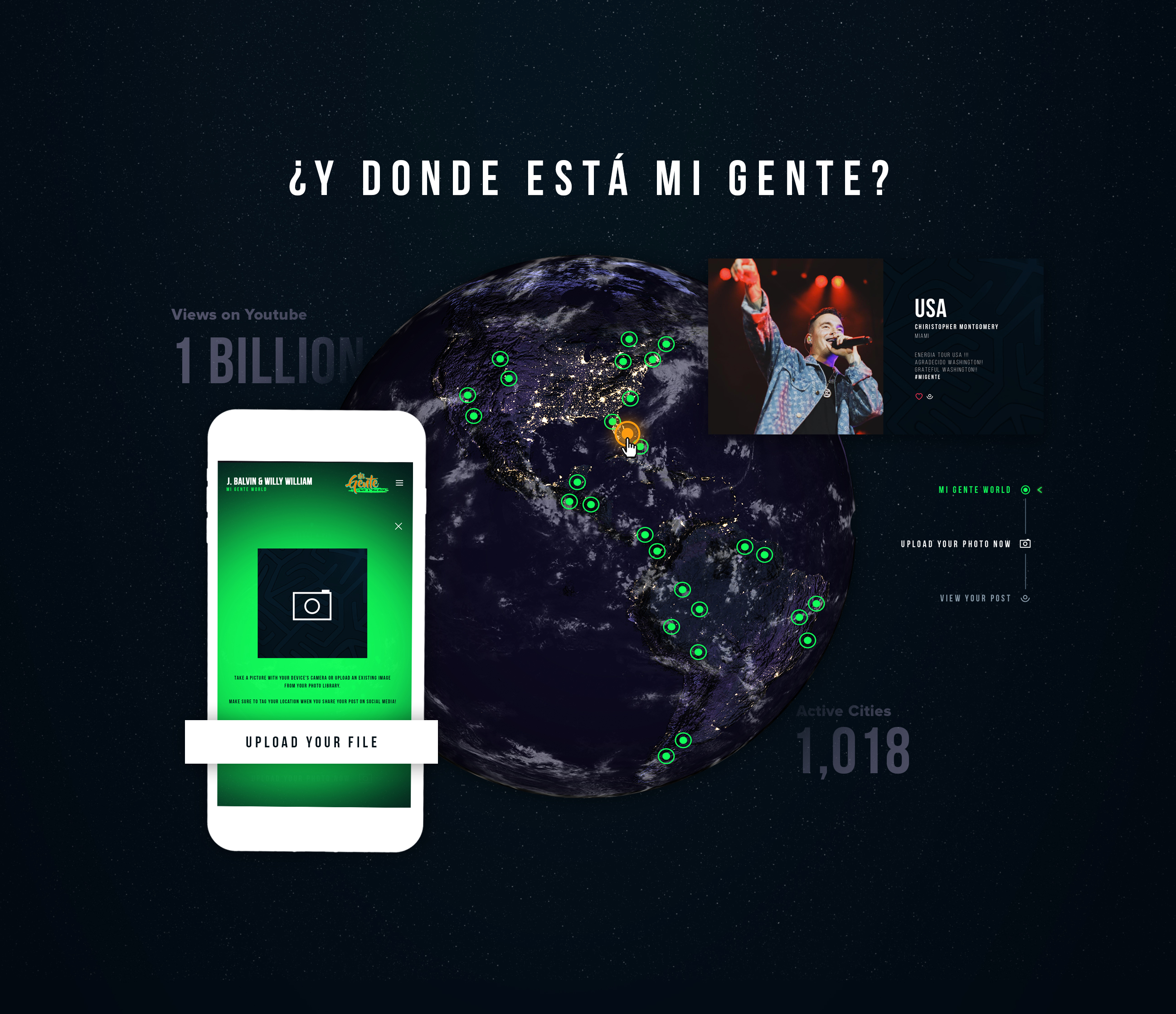