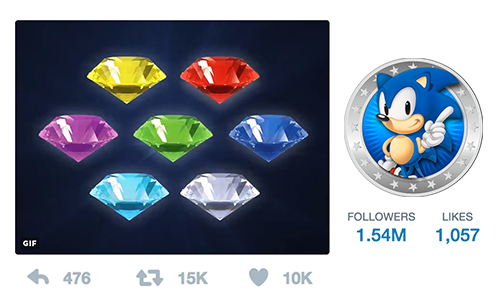 Our goal was the generate social engagement and reach on Sonic's wildly popular Twitter account by prompting fans to share a post that spoke to the absurdity that has made Sonic's Twitter account such a tour de force. This was more than just about engagements, it was about sharing—and we knew that we couldn't just simply ASK our followers to retweet a post. We had to speak their language while providing them with something they felt compelled to share.

We zeroed in on a classic trope from the Sonic the Hedgehog series—where gathering all 7 Chaos Emeralds prompts Sonic to undergo a 'super transformation' that turns him yellow, gives him the ability to fly, and makes him invulnerable.

Our solution? Use a CTA that stood out from the noise and was itself a parody of spam, chain emails, and social media comment section nonsense—all familiar to our social media-savvy audience:

"You have been visited by the seven chaos emeralds. You will go through a super transformation, but only if you retweet."

This tongue-in-cheek approach gave Sonic Twitter fans a fun reason to activate and immediately retweet the post as an acknowledgment and approval of the inside joke they now shared with each other, and the official Sonic the Hedgehog Twitter account. The CTA was paired with a simple animated GIF of all 7 Chaos Emeralds glowing together. Are we feeling a super transformation yet?

The results were staggering. The tweet garnered over 15,000 RETWEETS and 10,000 LIKES, making it one of the highest performing tweets in the Sonic's notorious social media history and one of the most retweeted brand tweets of the year.

All with zero paid media. 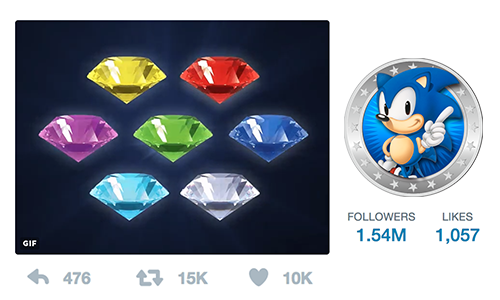