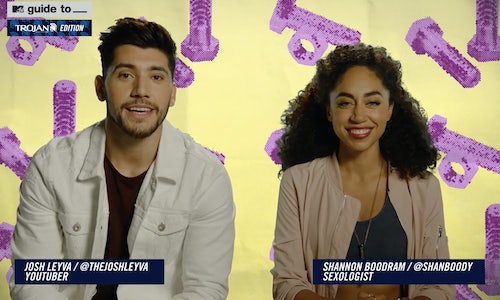 1) Improve Millennial's perceptions about condoms and normalize condom usage
Trojan Brand partnered with MTV, a trusted, influential, and culturally relevant brand that could speak to this audience in an authentic and relatable way.

2) Drive views of our custom video series, with a goal of 5.7 MM video views
Our target's consumption of video content is high, particularly online; we wanted to create snackable, engaging content that would capture the attention of this audience.

3) Distribute and adapt content native to each media platform to drive positive fan engagement
MTV set out to distribute Trojan Brand's messaging in every platform where our target is watching video, interacting with friends and getting news to communicate the importance of safe sex. We then adapted and optimized along the way to match our demo's evolving consumption habits.

We measured the campaign through a proprietary social listening tool, which tracked views and engagement of the content across multiple platforms (e.g. MTV.com, YouTube, Facebook, Twitter). We also conducted a panel study of Millennial aged participants to measure how the campaign aided in normalizing condoms and improving attitudes towards condoms.

MTV and Trojan Brand teamed up to create an 8-part digital series titled, MTV's "Guide To ____" aimed at helping young adults navigate the tricky sex and relationship scene with smart, humorous and relatable advice that communicated the importance of condom usage across different platform environments. We followed the eyes of our target and adapted the content specific to each platform to drive fan engagement.

To bring the series to life, we created messaging using our target's vernacular to resonate with their communication style and developed the campaign tagline, #ResponsibleAF. This tagline was integrated into each piece of content in various ways, and followed the campaign's messaging – "Use a Condom Every Time. ResponsibleAF." Trojan Brand leveraged the authority of MTV editorial, as well as the voice and reach of social influencers Shannon Boodram, clinical sexologist, and Josh Leyva, relatable YouTuber, to carry the series and embody the #ResponsibleAF messaging.

Next, we adapted and optimized the content from the digital series for various social platforms based on real-time performance and consumer engagement. We tweaked the content as each episode rolled out on a weekly basis to be more visually engaging and punchier, creating stronger fan engagement and response. We employed a multi-platform distribution strategy that modelled how Millennials consume content and modified Trojan Brand's content for each platform environment – YouTube, Facebook, Snapchat, Twitter, Instagram, Tumblr and TV – so that our message would break through the clutter and be consumed in a variety of ways tailored to each platform.

Long-form episodes were hosted on YouTube, and short-form versions called "Just the Tips" lived on Facebook and Twitter for easy, snackable consumption. To capitalize on the nature of Instagram and Tumblr, we created GIFs sourced from our episodes to further our engagement and reach. Additionally, MTV's editorial team adapted the "Guide To" content for its Discover channel on Snapchat, and for contextual relevance, Trojan Brand aligned their ad creative with content featuring couples modelling safe sex behaviour. To engage with fans in real-time, we experimented with four, first-to-market Facebook Live Q&A sessions hosted by Shannon on MTV's Facebook page discussing topics covered in the digital series. All "Guide To" content was centralized on guideto.mtv.com where fans could consume content from our program, submit questions for our Facebook Live Q&As and socialize the content.

As a deeper extension of our #ResponsibleAF movement and to further normalize condom use, Shannon created two original videos for her YouTube channel, one that debunked myths behind women purchasing condoms, and the other that shared her personal story as to how she contracted an STD and her learnings from that experience. Her vulnerability was celebrated by her fans and received numerous press accolades.

The campaign culminated at the biggest cultural event of the summer – the 2016 MTV Video Music Awards. A custom TV spot ran in-show that utilized MTV's iconic Moonman and the #ResponsibleAF messaging that was relative to the show. This allowed us to authentically normalize condom usage at the center of pop culture stage.

MTV gathered insights from two panel studies titled "Latitude Research: Ad Effectiveness & Sponsorship Integration Study" and "MyVoice" to inform our campaign partnership with Trojan Brand. Participants A18-24 in each study answered a survey after being exposed to our campaign message. Results showed we:

- 72% of participants said they would talk about Trojan Brand with someone (+95% vs. pre-campaign) (Latitude)

2) Exceedingly surpassed our view goal by 119% with a total of 12.5 MM video views
We saw positive response and engagement with the content on platforms such as Facebook & Snapchat, which comprised 77% of the total video view traffic by consumers as measured by Echo, our social listening and tracking tool.

All findings indicate consumer favorability with Trojan Brand and MTV's partnership, and showed they appreciated and agreed with the importance of talking about safe sex and using a condom every time.

Video for Trojan Brand Condoms and MTV’s “Guide To” Series 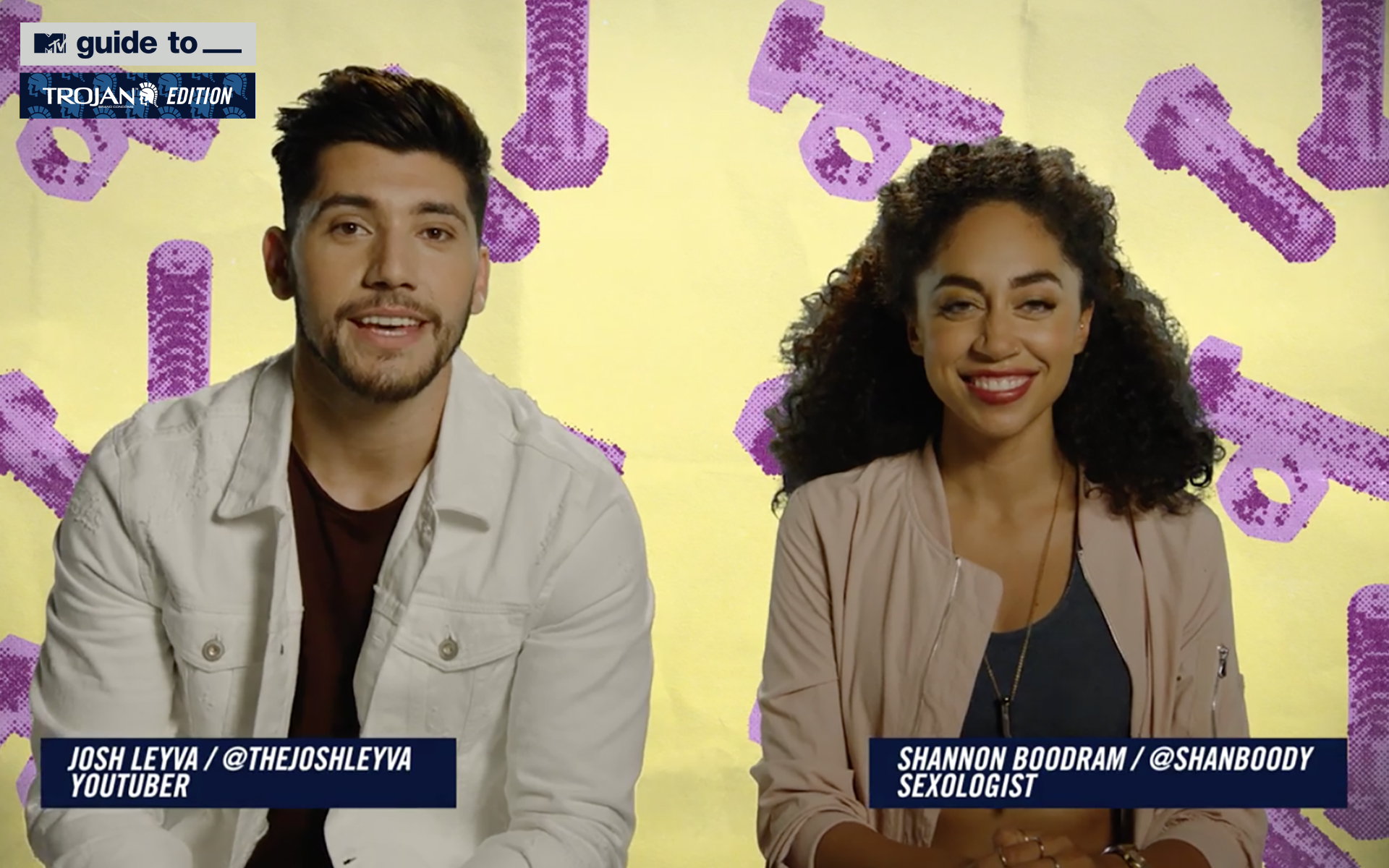