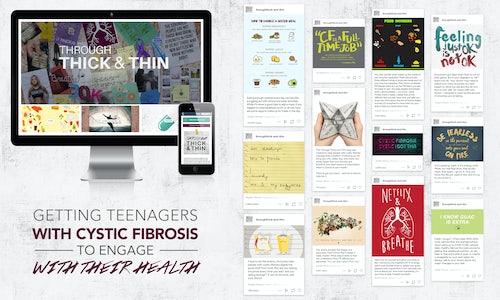 Through Thick and Thin Tumblr

Cystic fibrosis (CF), an autosomal recessive genetic disorder that occurs in approximately one of every 2,500 live births in the United States, is characterized by multi-organ system involvement, primarily affecting the lungs and the digestive tract.

Teens with CF face unique challenges as they take on more responsibility in their treatment management. Some teens rise to the challenge, but more often teens with CF prioritize other areas of their lives over their health. This is a time when habits are formed that they will carry into their adult life.

Unfortunately, very little audience-specific content is available for these transitioning teens, which is exactly why the Through Thick and Thin Tumblr blog was created. The blog speaks to teens about a range of health issues in a high-density, high-interaction community (Tumblr) where patients with CF actively share and consume information with their peers and reflect on what life is like with CF. The blog works to instill confidence in this audience by helping them take on their everyday challenges with food and enzymes by providing education and tips, giving them support and reassurance, and confirming they are part of a loyal community.

The strategy began in an immersive, behavioral design session where, working from social listening and primary and secondary data, key behaviors were identified as change agents for adherence. The social listening also provided insight into where the initiative would live. Research unearthed a thriving community within the #cystic fibrosis hashtags on Tumblr. After analyzing the content teens liked to share, content buckets were created to align with their goal of disease awareness as well as the behaviors key to adherence.

As an overarching filter for all work produced, a social purpose was formed—decoding daily food intake. To ensure our approach matched the needs of the community, several influencers were invited to an online "mood board review" where they gave feedback on how to best serve the cystic fibrosis (CF) population. Influencers were also built into the editorial schedule so their personal experiences could juxtapose the adherence content on the blog.

Through Thick and Thin launched on January 26, 2016, and shared 84 original posts intermixed with reblogs from the CF community over the course of the year. Blog posts were created in a variety of rich communication mediums to help teens with medication adherence/storage, symptom identification, nutrition, motivation, inspiration, and work with their care team.

Based on initial analytics, patients are engaging with the content in record numbers. Within the first 8 days of launch, one post had the second highest engagement rate ever for a post tagged with #cystic fibrosis. Of the top 5 Tumblr blog posts with the cystic fibrosis hashtag, 4 reside on Through Thick and Thin. Today the blog has over 7,000 followers and an engagement rate of 1.43%, almost double the Tumblr benchmark of 0.6%–0.9%. Tumblr's benchmark for content reblog rate is 9%; Through Thick and Thin is at 21%, which achieves our goal of patients with CF using the blog's adherence and disease awareness content to represent themselves. Tumblr regards Through Thick and Thin as a best-in-class example of how content should be approached for unique patient populations on the platform.

Content engagement is also growing organically as the blog's paid media investment had a 35% ROI from earned engagements on the platform. In fact, earned engagements have reached up to 20 generations of users. Tumblr and Union Metrics, its analytics partner, certify any post that reaches 9+ generations as "viral," and 7 posts on the blog hold this distinction. The numbers don't have to speak for themselves though, as patients with CF are actively reblogging content with added commentary. Users have shared highlights, such as "This is SO helpful for CF patients who need to be keep[ing] up their weight," and "This is honestly the best message I have ever seen from an ad ever." 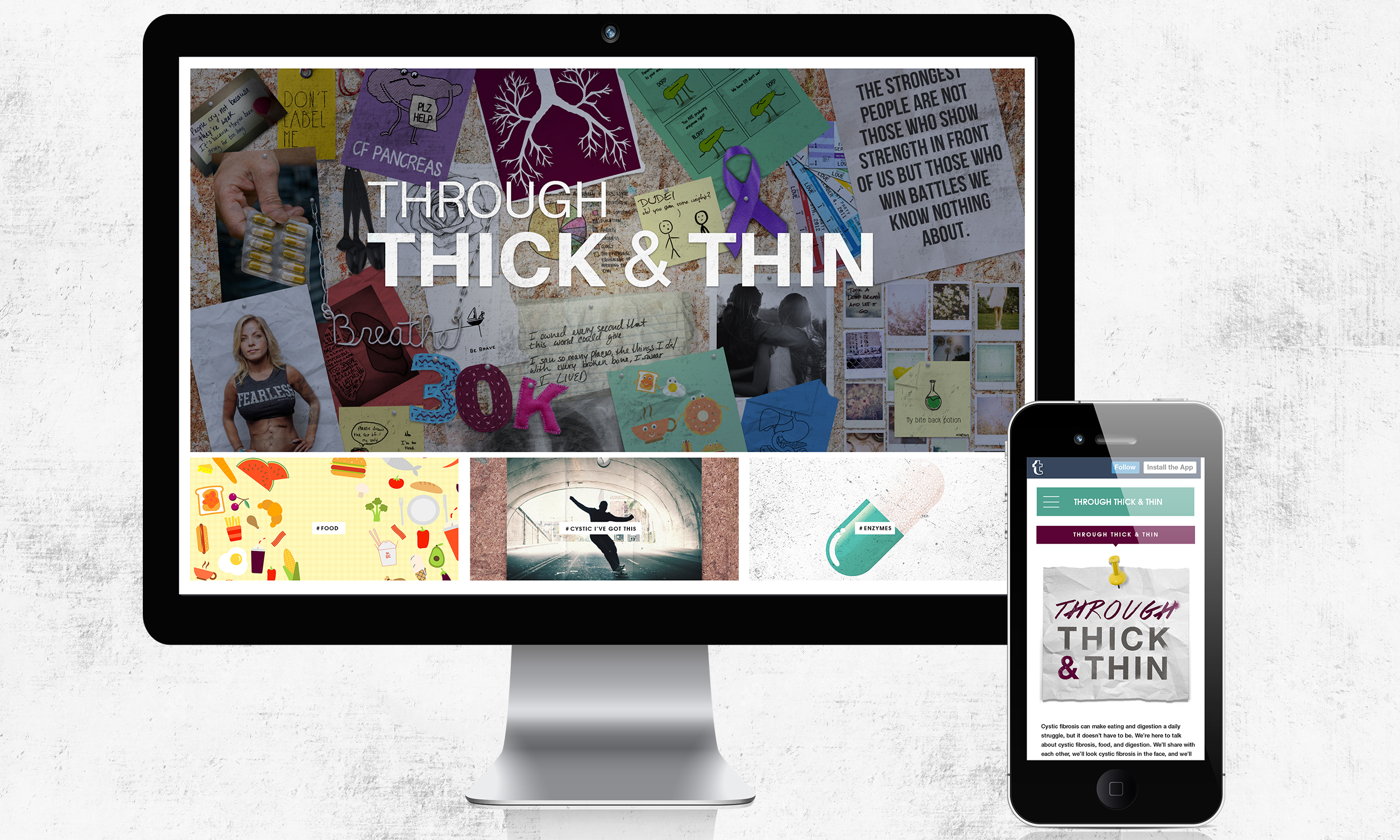 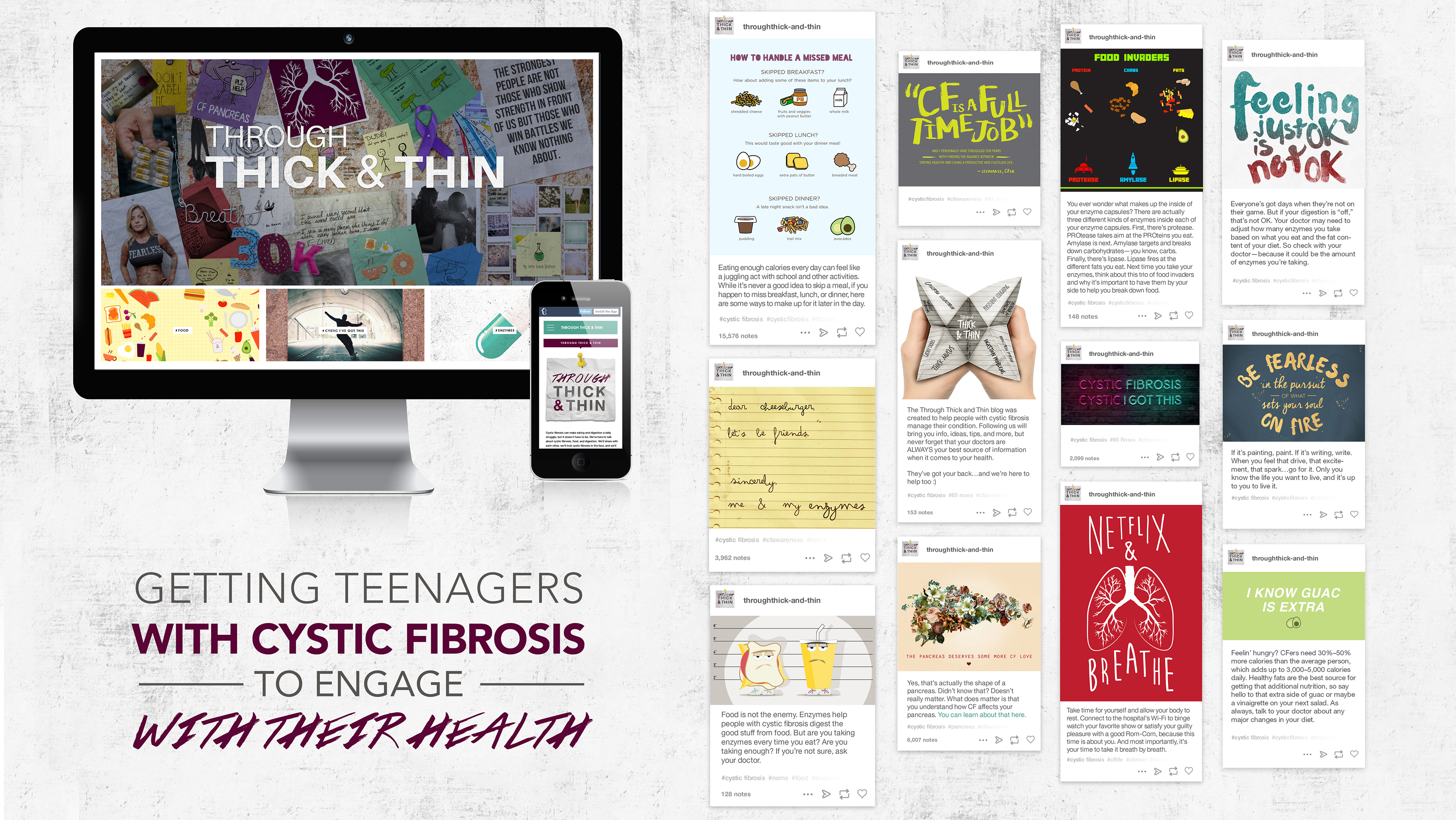