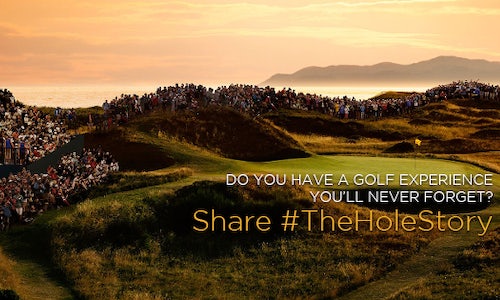 Through its Priceless platform, Mastercard enables people to have more meaningful experiences.

With the Mastercard-sponsored British Open on the horizon, the company wanted to create a more personal and priceless connection with golf fans, a key audience that spends 12x more annually than non-golf fans.

The campaign objective was to increase brand perception among golf fans and earn the highest Share of Voice (SOV) among sponsors at The British Open.

Golf may not be as physically demanding as other sports, but to golf players it is more than just sport. It creates social connections that build friendships, business relationships and enable family bonding.

These connections are at the heart of the meaningful, personal experiences golf fans have while playing the sport. Mastercard's strategy was to celebrate its fans' priceless golfing moments around the British Open, an important moment on the golfing calendar.

Video was used on Facebook and Twitter to introduce the campaign, promoting hole stories from fans and pros. An onsite VR booth allowed fans to experience pro golfer, Graeme McDowell's favorite hole. Live streamed stories from legendary golfers including Tom Watson and Graeme McDowell were shared on Periscope and Facebook Live in order to engage fans unable to attend the event.

A 360 image of "The Postage Stamp", one of The Open's most notorious holes, was shared on Facebook along with a slew of iconic stories from the location. Video booths onsite allowed Open patrons to share their personal hole stories while at the event. Community managers commented on the shared stories and posted real time video responses from Mastercard's golf ambassadors.

All layers in creating authentic (Priceless) moments of connection with golf fans around their passion.

This digitally led and video focused campaign surpassed all goals both on the ground and online, driving card usage, a deeper brand preference among global golf fans, and achieved majority SOV of all brand sponsors on site. 50% of all card usage onsite was Mastercard:

Over 1,000 stories were collected, ranging from emotional to triumphant, all articulating the passion of golf fans. Mastercard earned the most SOV among all patrons at the Open at 50%

82% of Open patrons were highly likely to recommend Mastercard to a friend or colleague (Source: The Open onsite Survey)