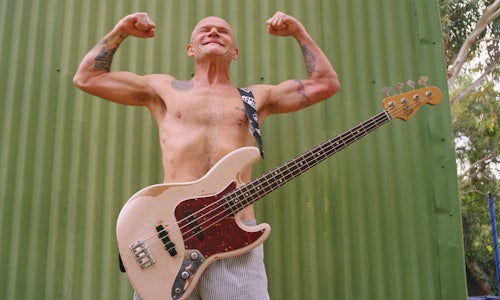 For the past three decades, Flea has pushed the art of bass playing to a new level. To honor the impact this founding member of The Red Hot Chili Peppers has had on the modern playing style, Fender and Flea joined forces to create his first signature model for the brand, The Flea Jazz Bass®.

A hand-in-hand collaboration between Flea and the Fender product development team,

this signature instrument is a testament to bass guitar perfection. At each stage of the design process, Flea incorporated his favorite elements from his vast collection of basses, to craft a bass that embodies his playing ethos.

Through an integrated multimedia campaign, like an introspective artist profile film, or UGC-based competition that asked participants to submit a photo of them impersonating the bassist's signature style, Fender sought to activate both Flea and the Fender brand's loyal fan bases around the launch of the new product .

At each stage of the campaign, Fender utilized media outreach/press coverage, paid advertisement, social media, and out-of-home marketing. The overall objectives of the campaign were to A) build credibility for both the Fender brand and Flea through awareness of the partnership B) engage and build loyalty for both Fender and Red Hot Chili Peppers fans C) enourage organic conversation through a user generated content program and to finally D) drive consumers to purchase the instrument, all the while supporting the campaign with quality content to keep interest high.

The first phase raised awareness about the product through a unique video, starring Flea. It was distributed via press and paid media. The Flea Jazz Bass® was announced on July 11, 2016 in an exclusive feature story with High Snobiety, which featured the campaign video, specs on the instrument and a direct link to purchase. The online story also pushed out via their social channels. Following the exclusive, Fender went wide with the video/press release to targeted media outlets. Based on the wide appeal of Flea and the Red Hot Chili Peppers, media coverage in more than 175 lifestyle and music industry outlets was secured.

Also included in the campaign's initial phase was a paid media component. Through partnerships with Bass Player and Guitar World, the bass was promoted across outlets' print, digital, social, and newsletter channels. Sponsored social media posts also went into the campaign's paid promotion push, creating direct traffic back to the product's listing on Fender.com

The next phase of the campaign focused on engaging and activating Fender and Flea/RHCP fans on social media. This first began by promoting the campaign video (itself a departure from typical Fender video content due to its intimate, human interest components) across both Fender and the band's social media accounts.

After gaining unprecedented traction on the launch film, the campaign initiated a product giveaway competition, dubbed #MyFleaStyle, to cultivate user generated content to further the release's reach. The competition aimed to draw out fans' personal connection to Flea and the Chili Peppers by having them submit Instagram, Twitter, or Facebook photos of themselves perfoming their best Flea impression. The wealth of submissions featured contestants holding their own basses performing leg-kicking jumps, wearing bee keeper suits, and many shirtless photos. Over the course of the contest, slideshow galleries of top entries were published to encourage for more submissions. At the contest's conclusion, Flea himself chose the winners and they received a Flea Jazz Bass®, as well as a signed copy of the Red Hot Chili Peppers' new album "The Getaway".

The final phase of the project used a combination of event / out of home promotion to create long-tail content designed to re-engage consumers after the initial campaign push.

Featuring the product prominently in Fender's 2016 Summer NAMM (2nd largest music retailer convention in the country) booth gave media outlets a chance to get a firsthand look at the bass. This, coupled with product seeding to some of the industry's most trusted gear reviewers, resulted in hundreds of third party videos featuring the bass being uploaded to YouTube over the course of the year. To solidify the campaign's messaging and amplify its effect, campaign signage was installed in retail locations to once again reach the consumer at the point of purchase.

The Flea Jazz Bass® campaign resulted in one of Fender's most successful product launches to date. The effectiveness of the integrated campaign can be measured in these major areas:

Additionally, the campaign was cross-promoted on both Flea (900K FB Fans) and the Red Hot Chili Peppers' (28M FB Fans) social media accounts, and the #MyFleaStyle garnered more than 14K entries from fans.

Aside from the sheer volume of impressions the integrated plan generated, the campaign allowed Fender to secure coverage in outlets outside of musical instrument media, experiment in creating higher-quality, artist-driven video content, and activate another large fan base around a product launch. 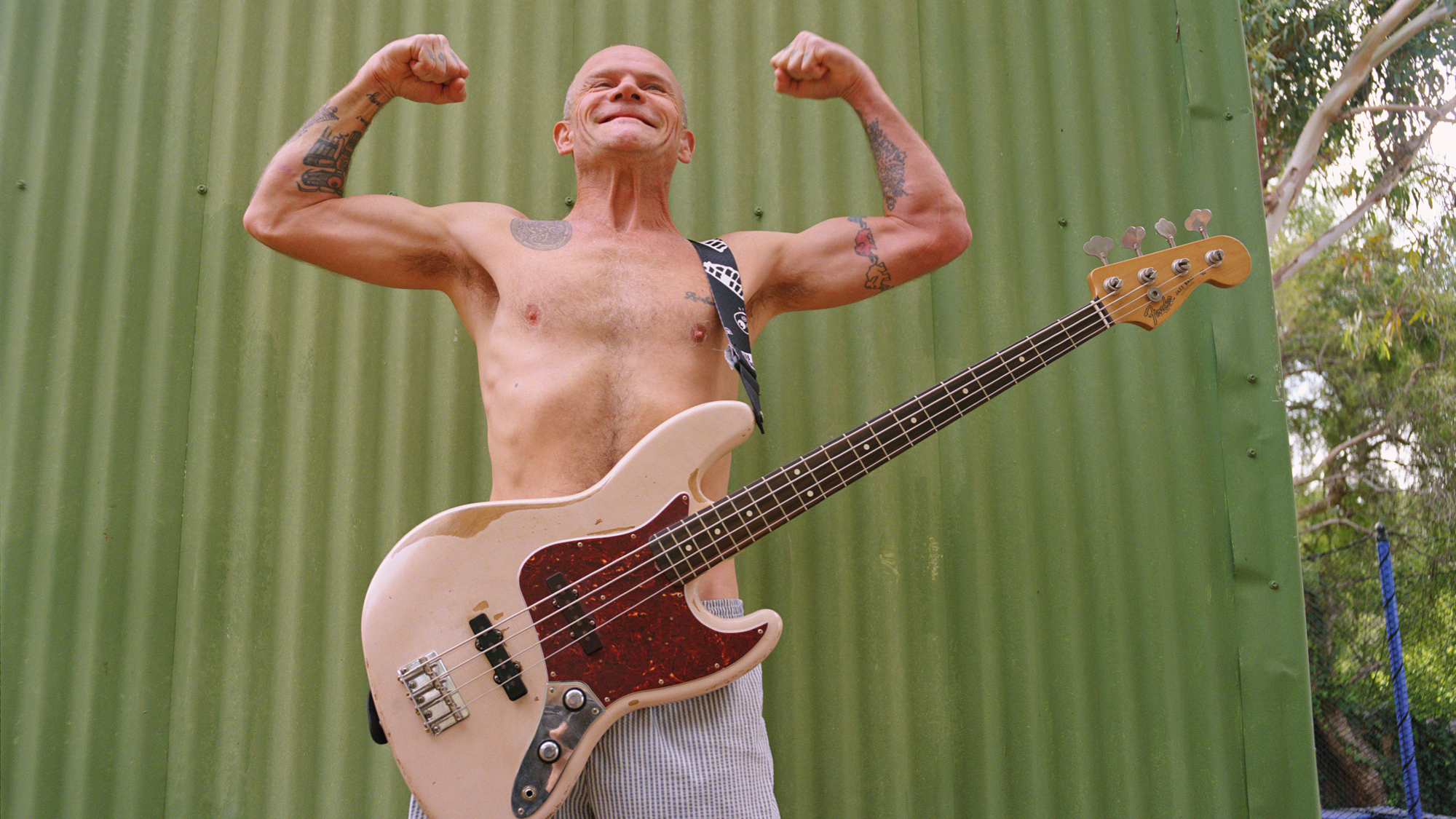 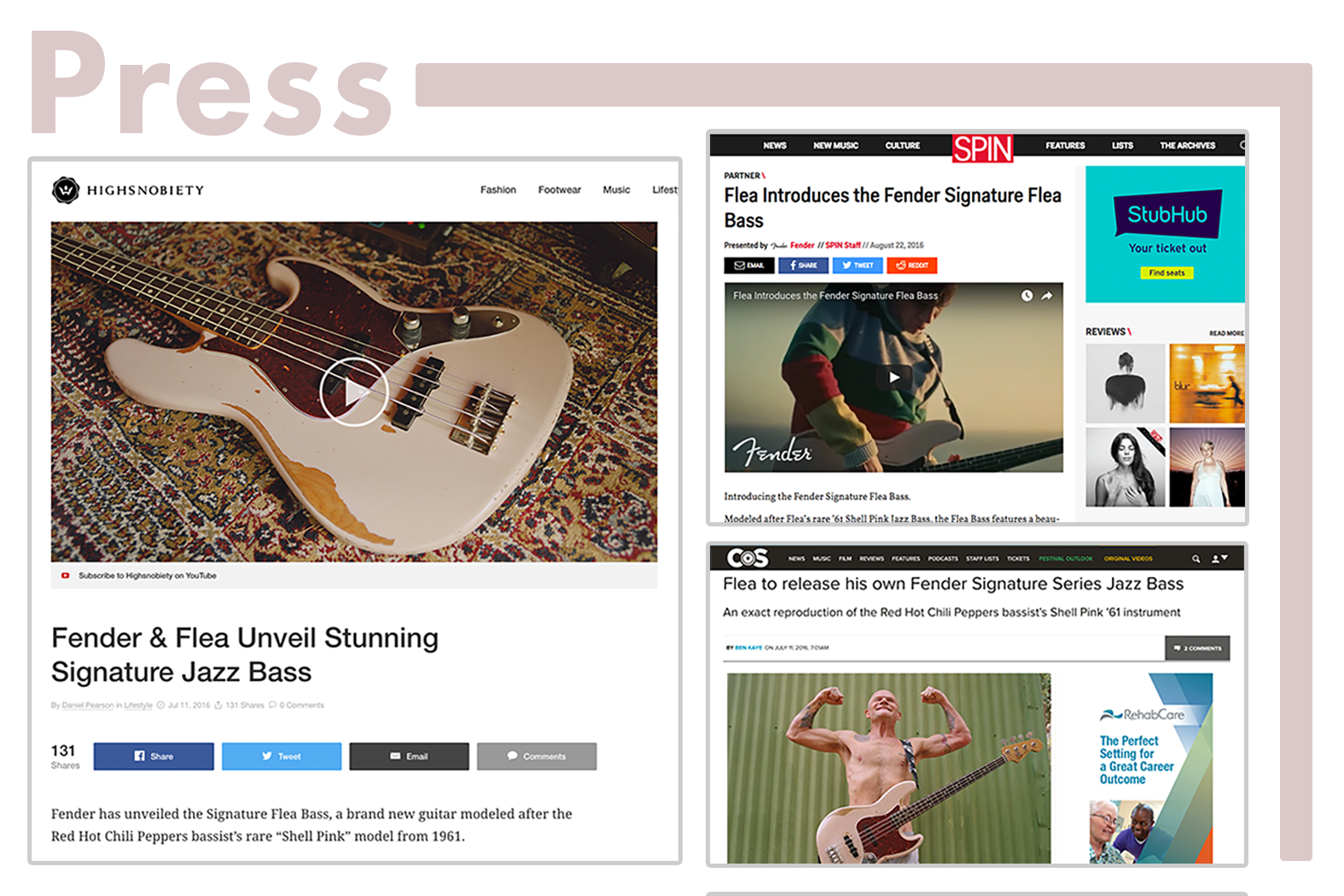 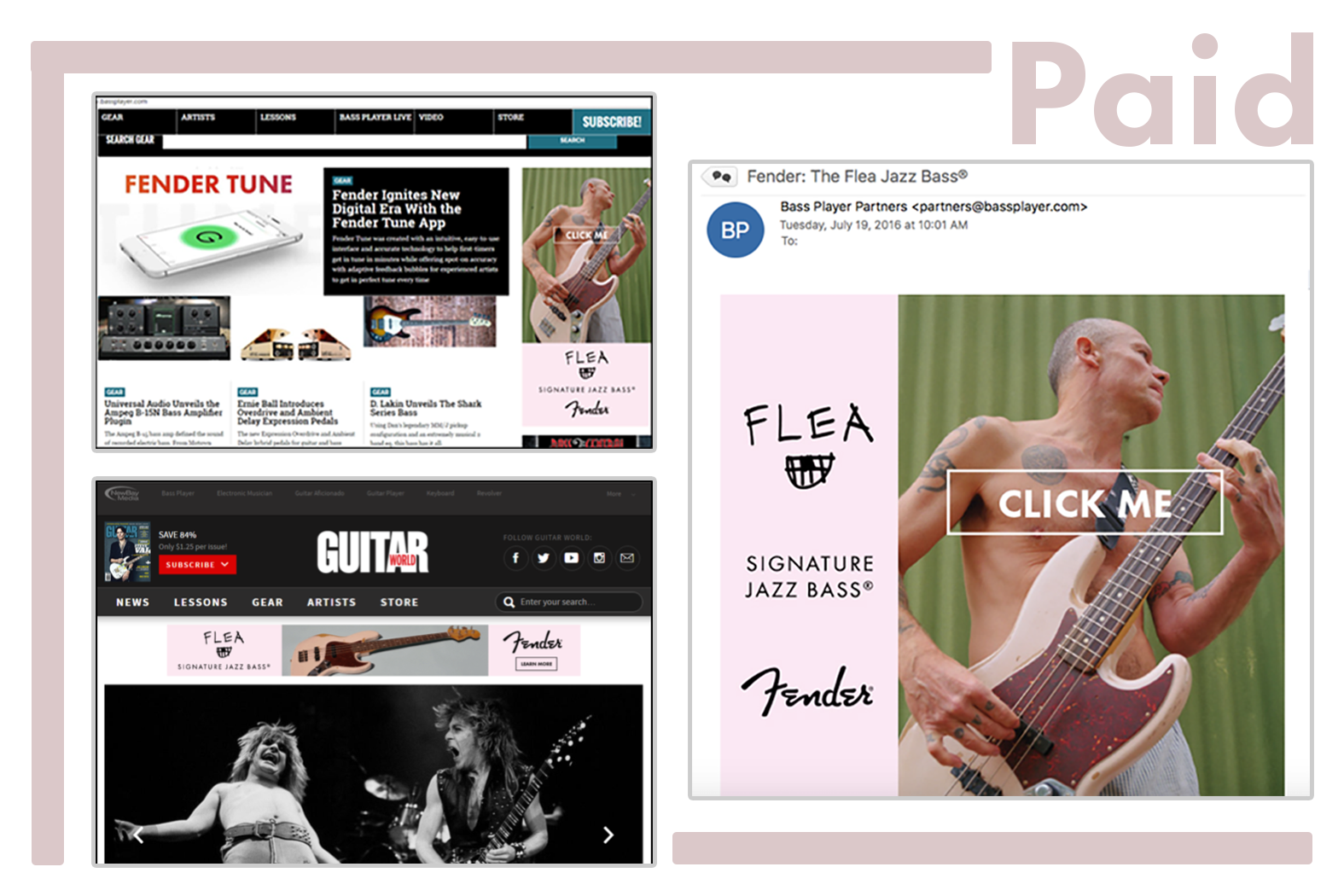 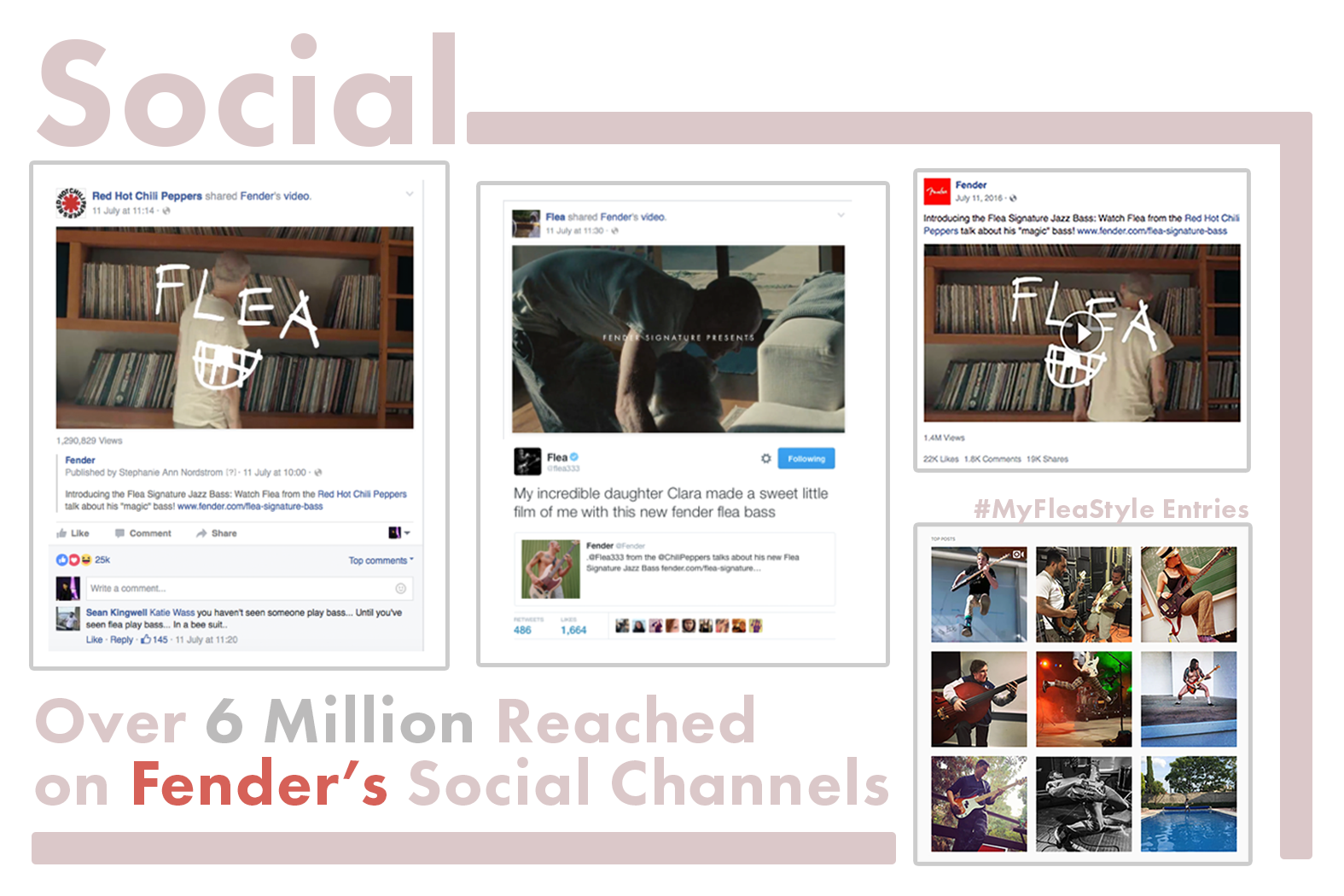 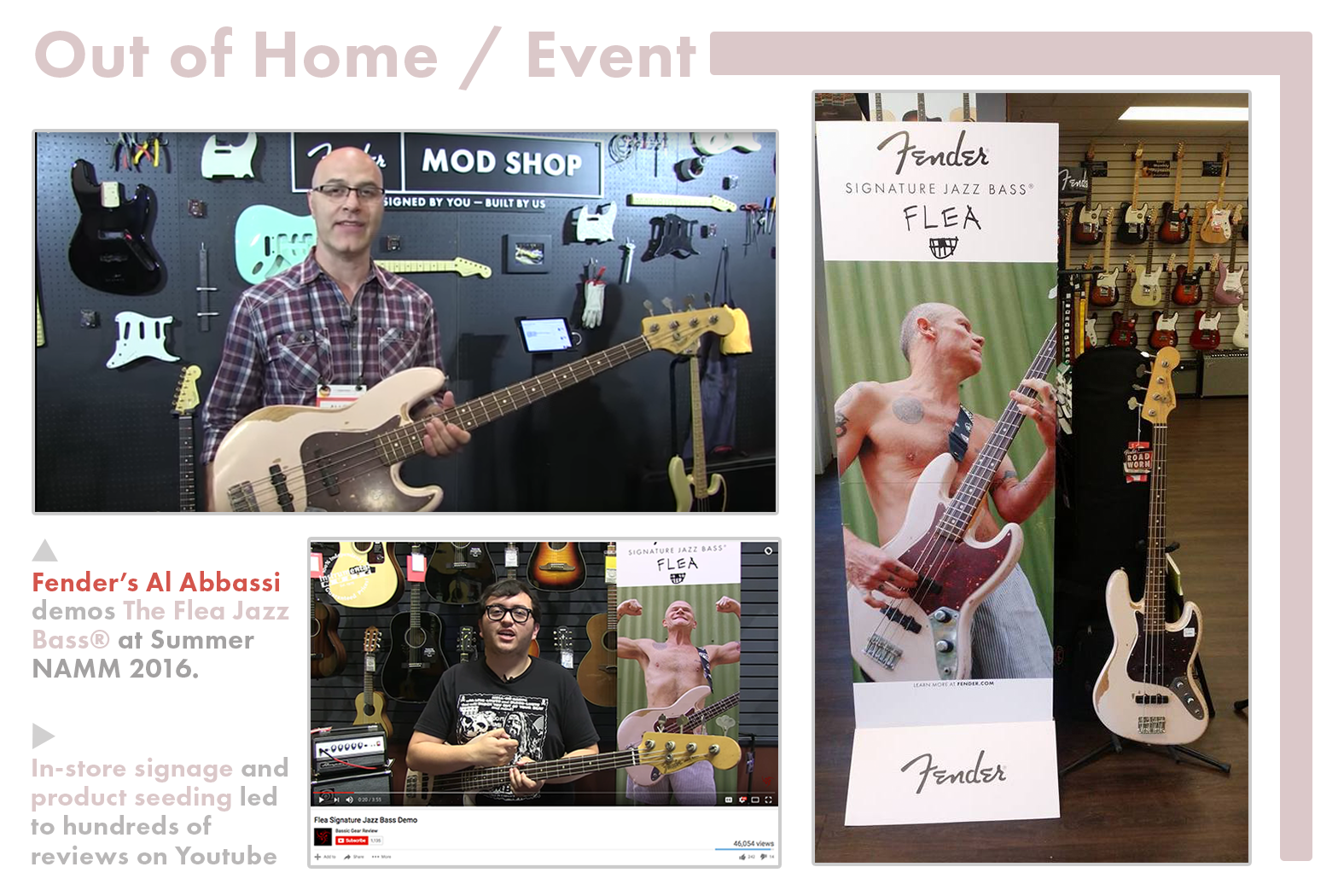