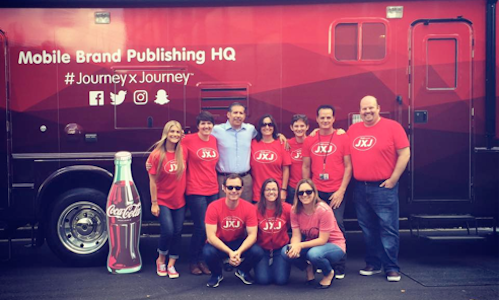 JourneyxJourney, sent two Millennial brand journalists from the Coca-Cola Journey team on a cross-country road trip to discover, capture and amplify stories about the company's deep ties to American culture. Connecting with audiences by creating innovative brand journalism was the inspiration. Audiences included not only consumers, but also journalists, employees, partners and more.

Because Coca-Cola is such a ubiquitous brand, and one that nearly everyone has an experience with, the Journey team wanted to find out what that really means to its audience. They wanted to shed their roles as voices for the brand and morph into content producers who would listen to what their brand had to say to them through the voices of the nation.

The team's goals were to source and share stories across the country – performing a geographic deep-dive into how Coca-Cola merges with the landscape of the country. Connecting with brand ambassadors, partners, bottlers and employees to examine what Coca-Cola means to them and how it effects their city, life and lifestyle were all important aspects of the story that interested the team.

The story of how the brand is experienced and how it impacts communities served as the centerpiece to merge Coca-Cola as a brand and a publisher. The team envisioned going beyond publishing branded content to become a brand sharing relevant stories with its audience in real time.

The Journey platform has served since its inception in 2012 as a place to tell brand stories, connect with a variety of audiences and allow for interaction with its audiences.

The Journey team saw an opportunity to engage with their audience by temporarily transforming the Journey platform into a brand journalism publishing hub for the three-week JourneyxJourney road trip. This would allow Journey to connect with audiences in a new way. By removing themselves from the "content engine" strategy and becoming instead generators of content that is reflective of their audiences' true brand perceptions, the team was able to converse more directly with the people who matter.

This approach followed traditional principles of journalism. The team prepared and familiarized themselves with the people and places they would be visiting and meeting. They listened to why these individuals were connected with the brand, what impact it had on their lives and how it affects the communities around them. They asked questions to truly get a feel for the atmosphere around Coca-Cola throughout the country. Finally they shared stories through a clear lens as a brand journalist, not as a brand content specialist.

This approach served to strategically humanize the Coca-Cola brand by seeing through the eyes of its partners, including consumers, employees, brand adjacent affiliates and more. Content created via this strategy has a tone that rings true and clear of brand promotion and instead cuts right to its impact and connection with the world around it. Video content, blogs, photos, social posts and more would come from this strategy of viewing Coca-Cola as a participant in the story of the country.

Platform integration would also play a strong role in the strategy, treating content as news and sharing it across relevant channels in a way that touches various audiences where they interact with Coca-Cola and Coca-Cola Journey.

Finally, the brand's participation in telling stories through a journalistic lens lays the groundwork for future storytelling and a platform dedicated to true brand journalism over the long term. By treating the brand as a participant in its story and developing content as free of brand promotion as possible, the Journey team was able to set the stage for future partnership with other journalistic entities.

The expedition launched in Atlanta with an employee send-off at the global Coca-Cola headquarters and made 20-plus stops across the U.S. before concluding in Los Angeles. The greatest challenge was to develop an on-the-road strategy to source, build and tell the stories in a timely manner. Coca-Cola Journey built a brand journalism team consisting of two Coca-Cola social media managers and equipped them with a mobile publishing unit outfitted with an editing suite, a producer, and creative directors to produce and publish content in real time. The team created a road trip-style itinerary complete with stops at locations relevant to Coca-Cola and acted as brand journalists during ther project.

The proprietary measurement formula of Coca-Cola Journey, Expression of Interest (EOI), calculates engagement based on social referrals, shares, SEO traffic and total visitors for an individual piece of content. Metrics are weighted based on net effect and scaled to be viewed as overall effect on the brand. By viewing measurements through the lens of brand-applicable metrics, the Coca-Cola Journey team is able to assess the true impact on the brand. Journey's EOI for the same period the previous year was on average 106. During the execution of JourneyxJourney, the EOI increased nearly 5 times to 540. 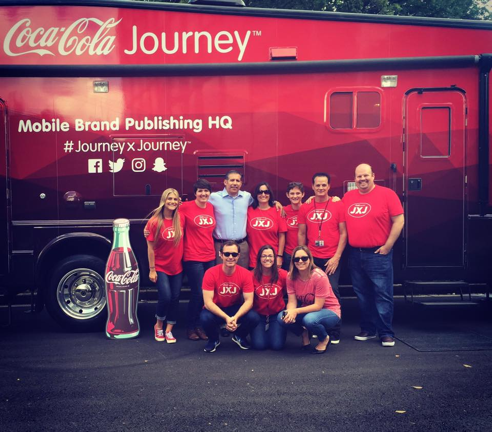