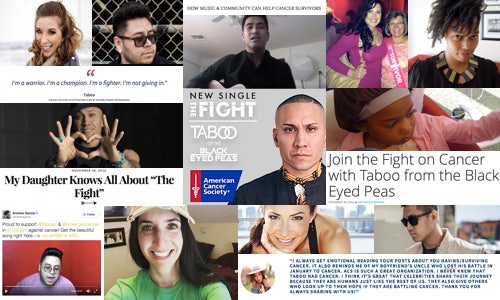 Most people know about the Black Eyed Peas. But what most people don't know is that one of the band's members, Taboo, went through a tough time battling cancer in 2014.

After privately fighting his way to recovery, Taboo decided to take his battle public. He became a Global Brand Ambassador for the American Cancer Society (ACS), visiting patients, sharing his story and giving them hope. He performed at ACS events to inspire the crowds and wrote a song — "The Fight" — to announce to the world that he had a cancer story to tell. His goal was to transform his battle with cancer into an anthem for everyone whose lives had been touched by

Working in partnership with ACS, Taboo released "The Fight" along with an emotional music video showcasing his personal cancer journey. He also announced that, for every download of the song through December 2017, ACS would receive ~70% of the proceeds. Now we needed to spread the word and extend the initiative's reach even further. So we activated influencers to raise awareness around #Th3Fight, drive downloads and sustain momentum post launch.

After extensive research and review, we identified eight multi-cultural influencers who were best-suited for the effort — individuals whose lives were impacted by cancer. The content they produced was emotionally charged and connected seamlessly to the program, while successfully spreading #Th3Fight hashtag, driving song downloads and raising funds and awareness for the cause.

When championing such a good cause, it's easy to work hard and push ideas until you come up with the perfect one. This campaign was definitely one of those for the team.

This Social Good campaign engaged an assortment of teams, including strategy, influencer marketing, media, sponsorship and more. We all worked closely together to ensure the program was aligned from start to finish.

For the influencer portion of the campaign, our primary objective was to drive awareness, which would in return drive more downloads of "The Fight" on iTunes.

We started by strategizing what types of content would drive the most downloads of the song. We quickly came to the conclusion that we needed video influencers to bring the song to life, either by singing a cover of "The Fight" or dancing to the song. All of this content would link directly to "The Fight" on iTunes so that any viewers could directly download the song. Based on this content execution, we prioritized Twitter and selected three high-reach Twitter influencers to create this video content. The results were just as expected: compelling.

Each of these influencers brought the song to life in meaningful ways, sharing their personal take on what it means to truly fight. Two of the influencers created their own unique versions of the song, which Taboo personally praised on Twitter. These videos were also whitelisted to drive more reach. The third influencer filmed his young daughter drawing a picture of her friend — a girl her own age who'd just learned she had cancer. As his daughter sketched, "The Fight" played in the background.

To make sure that we were telling Taboo's emotional story versus simply promoting the song, we married our Twitter video influencer content with blog posts. We engaged eight blog influencers with strong cancer connections to create blog posts and social shares talking about Taboo's "The Fight" and how the song reflected their personal cancer journeys and stories. From family members affected by cancer to survivors, each of the influencers had a very personal connection to cancer, and thus, the authority to share Taboo's story. The content they created turned out to be both emotional and captivating for readers. The average time spent on blogger content was 3 minute 37 seconds — that's an impressive 89% above the network average of 115 seconds.

Each of the influencers was hand-selected to ensure they met the following criteria for the program: Reach, Relevance, Resonance, Relationship. Relevance was an extremely important factor for this program, as we wanted influencers who matched Taboo's interest in music and dance, his personality and his diverse background. As such, we activated multi-cultural influencers with an affinity for music, dance or entertainment — individuals whose content would naturally align with our program's theme.

The influencer activation was one of the American Cancer Society's (ACS) first-ever influencer programs and worked in tangent with media, PR and sponsorships. The program as a whole —and Taboo's big announcement — was very well received internally and was also picked up by many news outlets and publications, including Entertainment Tonight, People, Billboard and more. Furthermore, the influencer content performed very well and drove additional awareness and donations for the program.

Influencers created very distinct content, showing how cancer touches us all in different ways and with different emotions — one of the main priorities of the program. Readers responded well to the content, finding it both emotional and captivating. The average time spent on blogger content was 3 minute 37 seconds — that's an impressive 89% above average the network average of 115 seconds.

The American Cancer Society's mission is to bring an end to the pain and suffering caused by cancer. The brand's social media and influencer campaign for "The Fight" — and the inspiring people, content and stories behind it — has brought ACS closer to achieving its powerful mission. 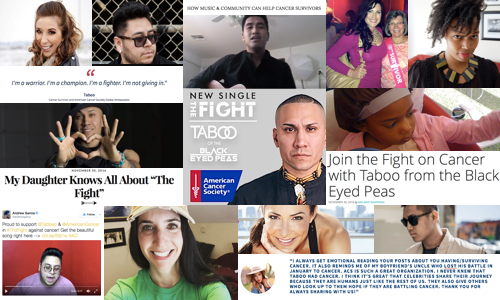