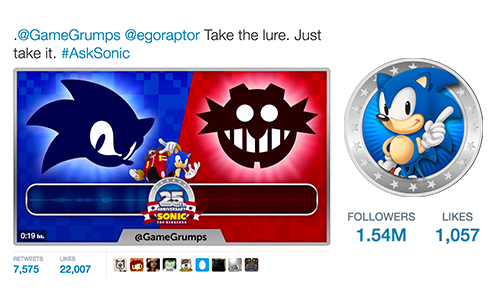 Objective: Generate awareness, buzz, and social engagement around Sonic the Hedgehog's 25th Anniversary with an attention-grabbing Twitter stunt, worthy of standing out on a social channel known for its overall epic-ness.

This elaborate activation began by posting a video of Sonic 'flashing back' to 2015 when Dr. Eggman hacked his Twitter account and responded to fan questions. This video teased the date of the next takeover and the fact that Sonic himself may join Dr. Eggman in answering fan questions on Twitter.

On the day of the takeover, Ayzenberg and SEGA set up a war room to monitor both fans and brands for Sonic and Dr. Eggman to respond to. Lucky fans and brands using the hashtag #AskSonic received a special, customized, real-time reply from both Sonic and Dr. Eggman. Nothing tweeted was pre-recorded; all reactions and responses were written, recorded, and posted LIVE.

Some notable brand engagements include Dues Ex, Hulu, Game Grumps, Tootsie Pop's Mr. Owl, and Twitch. We even tweeted at Assassin's Creed, saying we had kidnapped Ezio Auditore da Firenze, one of the main characters in their series (played by the same voice actor as Sonic), and said we were holding him hostage unless pictures of kittens were sent our way.

This campaign resulted in the highest performing day in Sonic's social media history:

- Fans even took the liberty of translating it into other languages, and creating their own animations and fan art for the campaign.

- "THIS IS THE GREATEST THING EVER ACHIEVED BY SOCIAL MEDIA. Oh my god I love you guys and this Twitter" - @chris_rws

- "Question for @sonic_hedgehog: Why are you hands down the best Twitter account ever made? I ask myself this daily #AskSonic" - @KayJulers

- "Good lord, the @sonic_hedgehog account is absolutely KILLING it today with their stuff. My question is...which pony is best pony? #asksonic" - @RockingSunset 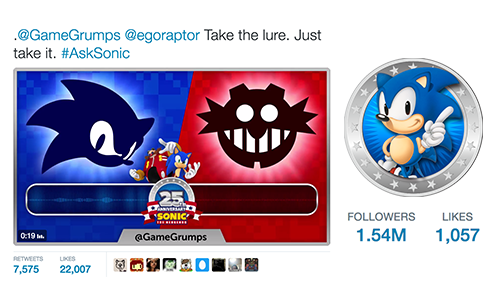