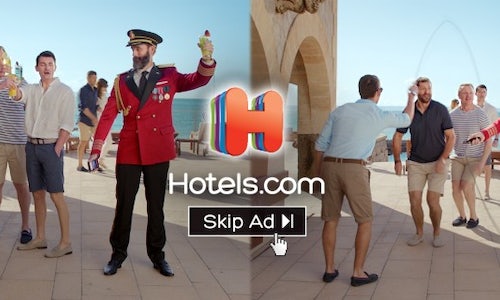 Hotels.com is the obvious choice for booking hotels and in the US they have been using their biggest fan, Captain Obvious, as an obvious-speaking brand advocate. In mid-2016 we took Captain Obvious across the pond and introduced him to the awesome people of Great Britain. It's actually not a pond, it's an ocean.

"People don't want to watch ads online, so they don't… they skip them"

Ignoring a commercial online has never been easier. All the viewer has to do is press 'skip ad'. But Hotels.com wanted to make sure people weren't going to skip Captain Obvious' big UK introduction, so with the help of Channel 4 we got Captain Obvious to skip the ad instead… literally… using a jump-rope.

We filmed our launch commercial twice. One like normal, with no jump-rope in sight. And another in which everyone is skipping. So when the viewer was served our ad on Channel 4's VOD platform and pressed 'skip ad', the video switched seamlessly to our skipping version of the ad. They could also un-skip too. Turning the button you press to ignore an ad, into the button you press to engage.

In the first week, the 'Skip Ad' collected more than 400 thousand impressions on the Channel 4 video-on-demand channel and reached an engagement rate of 34%. Overall 'Skip Ad' was skipped over 200k times.