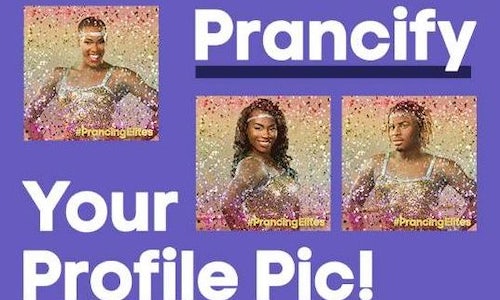 The social media plan for The Prancing Elites Project Season 2 leaned heavily on a pro-social initiative. The Prancing Elites are a dance team made up of five African American, gay and gender non-conforming dancers based in Mobile, Alabama. They have faced tremendous amounts of rejection and discrimination in their journey to do what they love most, which is dance! We set out to create a program that would allow fans and supporters alike to promote equality and support the Elites with the click of a button. Our aim was to create a pro-social, social movement that would be more than just a symbol of rallying behind our beloved cast, but also a larger sign of support for the LGBTQ community.

The objective of our pro-social campaign was to promote equality and acceptance, while also driving press & social buzz, and tune-in to premiere. Our goal was to execute the campaign in a way that kept it anchored in the pro-social message, while inherently creating excitement for the return of The Prancing Elites Project, resulting in tune-in.

To successfully make an impact in promoting equality and supporting the Prancing Elites, we set out to partner with an established LGBTQ focused organization, create shareable social content, leverage influencers with clout, and put our money where our mouth is by making a financial donation. All of these components came together to create the "Prancify Your Profile" campaign.

We teamed up with Twibbon, a platform for cause related social media campaigns, that specializes in custom profile picture filter promotions. Knowing that millennials often show their support for causes on social platforms via a custom profile picture overlay, we knew we were leaning into a behavior our audience was primed to participate in. Working closely with Twibbon, we developed a multi-colored, bedazzled profile filter that would stand out in newsfeeds as a symbol of support, and included our campaign's #prancingelites hashtag to promote the series.

To bring meaningful impact to the filter, and make it more than just symbolical support of the cause, we partnered with a leading organization in the fight for equality for the LGBTQ community, PFLAG, to incentivize participation within the campaign. For every filter used, Oxygen pledged to donate $1 to PFLAG National in support of the LGBTQ community. As part of the partnership, PFLAG helped promote the "Prancify Your Profile" campaign across their digital and social platforms and enlisted their local chapters and national influencers to do the same.

Five days prior to the season 2 premiere, we launched the "Prancify Your Profile" campaign in partnership with PFLAG & Twibbon. Fans and supporters could apply the custom "Prancified" filter to their Facebook/Twitter profile pictures. Once a user "Prancified" their picture, a post would show up in their newsfeed explaining what the filter stands for, promoting the donation, and inviting their friends to participate. The default copy also included core campaign messaging about the show premiere to drive tune-in awareness.

In addition to promoting the campaign from our own pages, we also partnered with several influencers to "Prancify" their profiles and share the message with their followers. Influencers included RuPaul's Drag Race alums Courtney Act, Sharon Needles, and Adore Delano, as well as TLC's Tionne "T-Boz" Watkins, and YouTuber Alx James. Additionally, Oxygen & NBCU talent Prancified their profiles, and we engaged Prancing Elites super fans to help us further spread the message. We also Prancified the default pictures on other Oxygen show pages such as Bad Girls Club (+5M fans) and Sisterhood of Hip Hop (+350K fans) to incite participation from those audiences. To further boost the message, we put paid amplification behind the top influencer posts to maximize reach among their followers. We set out to create a social groundswell by activating a passionate and influential audience who could mobilize, and effectively amplify the message to their networks of followers.

This campaign pranced it's way to success! The qualitative and quantitative results surpassed our expectations; and more importantly, the campaign made a pro-social impact through increased visibility and a $25,000 donation to PFLAG.

The bedazzled filter was used ~19,000 times across Facebook & Twitter which exceeded our goal of 10,000 by 90%! The momentum of the the "Prancify Your Profile" campaign helped propel it to Twibbon's 'Trending Campaigns' section on the homepage of the site for additional visibility. We also drove ~23,000 visits to our Twibbon campaign microsite. The overall campaign buzz led to press pickup from multiple outlets, further amplifying our message.

The "Prancify Your Profile" campaign raised our visibility in social, bringing in new fans and increasing engagement.

We saw this increased engagement and buzz translate to linear tune-in as well. The Prancing Elite Project season 2 averaged nearly 400K total viewers and was Oxygen's second highest rated millennial-targeted series in 2016 among F18-49 and P18-49. 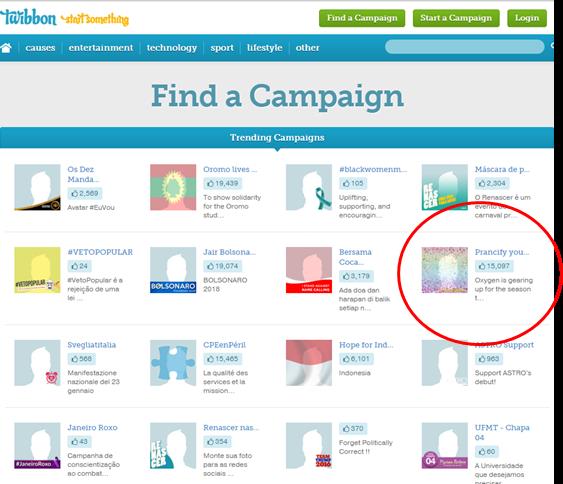 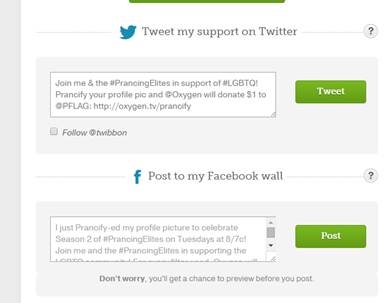 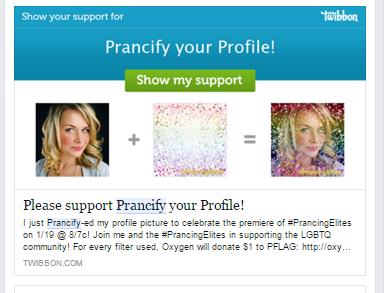 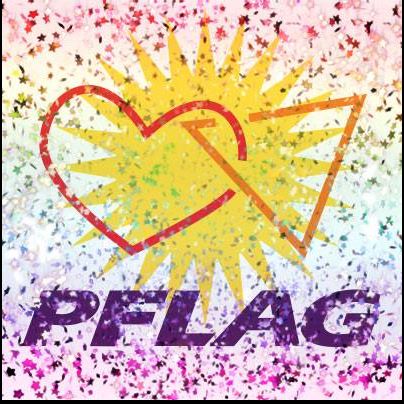 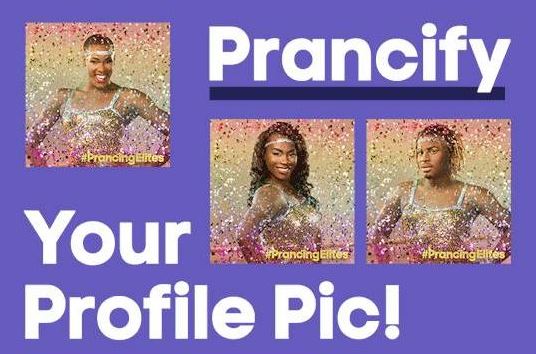