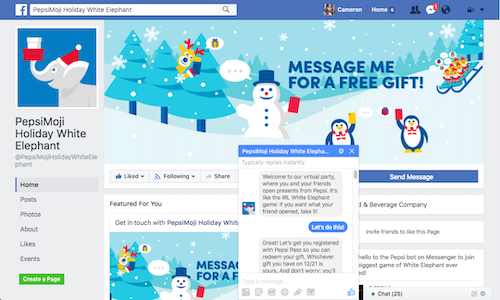 Pepsi wanted to play a bigger part of the Holiday season with their fans. With limited edition holiday packaging on their 2 Liter bottles rolling out in market, the objective of Pepsi's holiday campaign was to be a partner in the modern holiday gathering - the ones that look less like a traditional 1950s scene, and a lot more like messy kichens, charades, snowball fights, and fun times with family and friends - and aimed to use a digitally driven, highly cost efficient program to help bring on the holiday cheer.

The two key goals for the program: 1) Generate awareness of Pepsi during a key social timeframe for their fans: the winter holidays. 2) Drive engagement with our millennial audience in a relevant way by utilizing chatbots

The key insight: Pepsi target consumers love celebrating the holidays and the fun traditions that go with them, but not the ones steeped in stress and expectations.

To support Pepsi's new play in the holiday space, the brand centered their communications and engagement strategy around the beloved White Elephant Game tradition: an affordable, fun way to let Pepsi fans spread the holiday cheer with their friends. Through leveraging chatbot technology, fans were encouraged to join the biggest game of white elephant ever played.

To execute, the Barbarian Group created a digital version of game that leveraged Facebook chatbot technology. Chatbots are already an emerging platform, but the campaign's use of the chatbot technology was especially unique in how it was built to drive the white elephant game mechanics: rather than the chatbot having a 1:1 relationship between the user and the brand, the White Elephant chatbot served as a conduit to connect Pepsi fans to their Facebook friends and spur lighthearted holiday fun.

Fans were able to join the game via messaging the Pepsi White Elephant Chabot on Facebook, where the game was explained via GIFs and the user was given the opportunity to unwrap a free holiday gift. Prizes were a mix of PepsiMoji Holiday swag, such as ugly holiday sweaters, and digital rewards. Since not all elephant gifts are created equal (some are awesomely bad!), this made the ability to steal someone else's gift extra fun for the players. Once any of their Facebook friends joined the game, the chatbot allowed users to scroll through and see the gifts their friends had already opened, and then gave them the ability to swap their gift for one of their friends' if they liked it better. The chatbot also encouraged users to invite other friends into the game and increase their odds of seeing new gifts unwrapped, thus generating a chain of tens of thousands of users joining the game and swiping gifts from each other via the chatbot.

Awareness of Pepsi Holiday & the White Elephant game was generated through 1) holiday centric emoji content placed on Facebook and twitter, including mobile optimized 5-sec shorts, 2) the use of an OMD-produced influencer program, and 3) an e-commerce holiday pop-up shop that sold some of the gifts available in the White Elephant game should fans not end up snagging the gift they wanted.

For administration and prize fulfilment, the brand gained efficiencies by taking advantage of Pepsi Pass's digital loyalty program infrastructure, which was seamlessly integrated with the White Elephant Facebook chatbot.

The results surpassed expectations for the program: 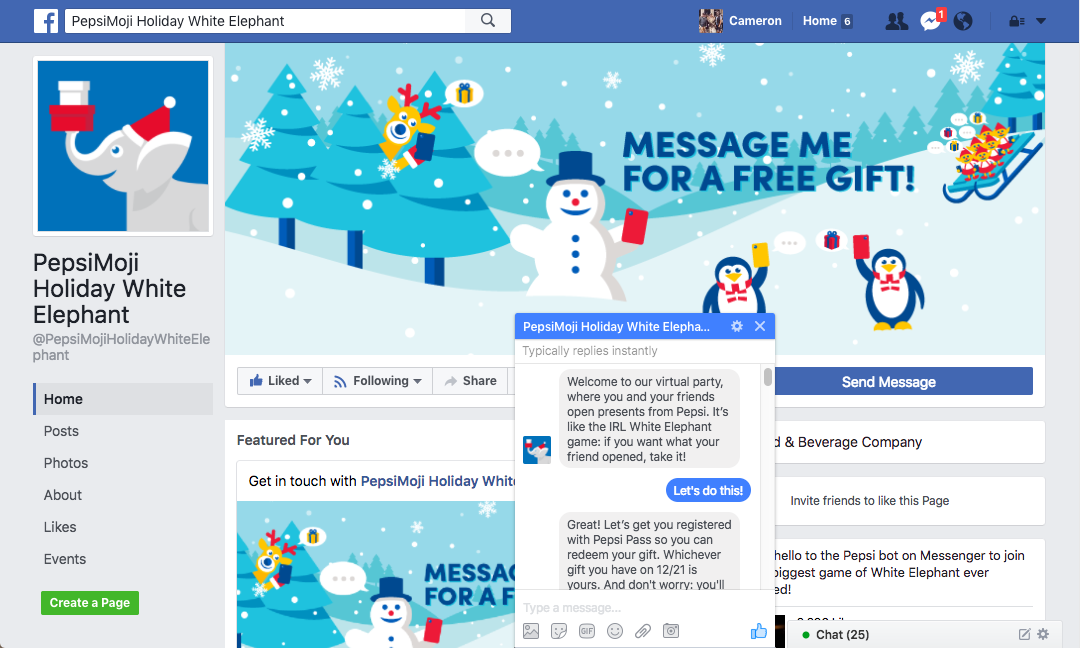 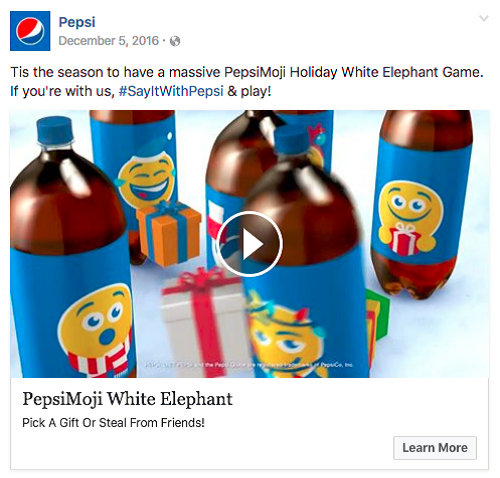 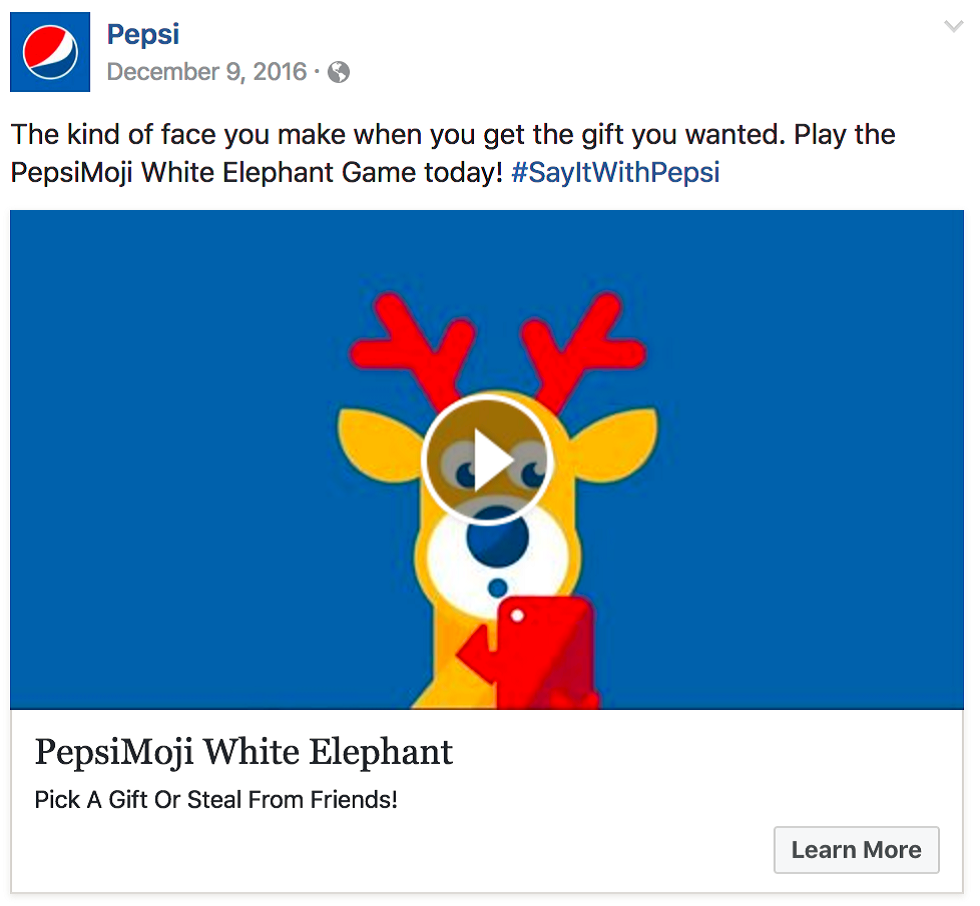 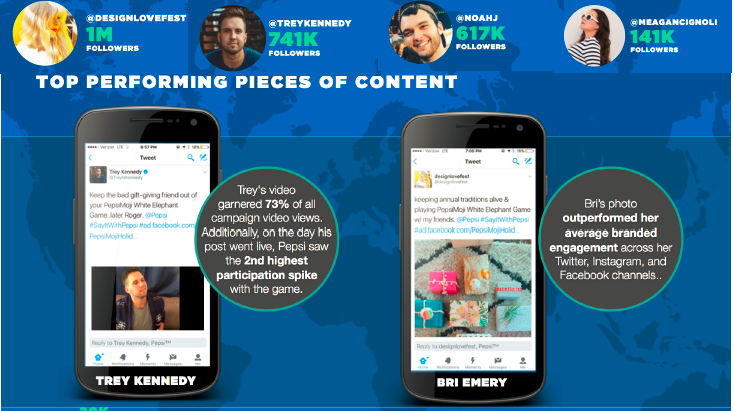