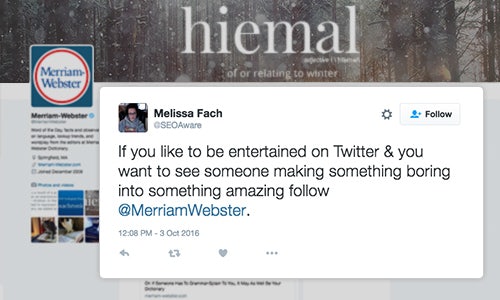 This past year, Merriam-Webster set out to blow the dust off the dictionary and establish itself as a vibrant, relevant, and engaging resource that goes well beyond definitions. Our goal was to engage people in the fun we have with language in order to help them understand and use it better—and to make Merriam-Webster the dictionary of choice for millions of users.

Our challenge was to defy the perception that definitions are a commodity and the dictionary is a blank and depersonalized voice of authority. We doubled down on our social efforts to show the world how funny, timely, and relevant the dictionary can be. Words and language are constantly changing, always fascinating, and often provoking. More than ever this year, The Dictionary has shown that words matter.

Our strategy was to engage the audience with humor and a personal tone, answering questions and challenges with insight, charm, and even a little strategically-placed snark. The voice is authentic and organic, often showcasing real conversations we're having in the office around the words we're watching and the questions we receive.

We also use big data (millions of lookups a day) to help us push social conversation into areas of proven interest: our real-time data tools tell us which words are being looked up at every given moment. And when lookups for a given word increase suddenly—meaning a lot more people are looking it up than usual, all at the same time—we can usually trace it back to an event people are watching, discussing, and thinking about. Twitter is the perfect platform to share these insights.

Sometimes those spikes in lookups are fun—triggered by a movie, a TV show, the World Series—but this year, it's mostly been politics. From notable pronouncements to our live-tweeting coverage of the words people looked up during the presidential debates, @MerriamWebster has been illuminating the events holding our nation's attention, as well as showing what's on people's minds.

Our trending data reports culminate in our annual Word of the Year announcement, which on Twitter provoked an overwhelming amount of conversation and press coverage (over 9 billion online press impressions—the "b" is not a typo), and was named a Best Data Story of 2016 by fivethirtyeight.com.

While the event-driven discussions are fascinating, we don't need an event: we engage people around language every day. The conversations center around pet peeves, words people like, and words they don't. Many people don't understand the true role of the dictionary: to catalogue and report word meanings and usage as language develops—even if that goes against what you were taught in freshman English. We can also be lighthearted: in honor of Memorial Day Weekend, we declared the hot dog a sandwich and quickly learned just how many people disagreed.

Whatever the topic, we realized that people care deeply about language usage and the evolution of words. —and now they come to @MerriamWebster for that conversation.

Media outlets like CNN, The Washington Post, and Vox pick up our trending word tweets and report them as news stories.

The New York Times commended our real-time coverage of word lookups during the presidential debates. They reported that people "turned to the website of Merriam-Webster, a dictionary founded in 1828 that now has a thoroughly modern social media presence." And Digiday called Merriam-Webster "the real winner of last night's presidential debate," along with The Washington Post, Mashable, The A.V. Club, The Huffington Post, The Hollywood Reporter, The Columbia Journalism Review, Good, and Twitter users themselves (and here and here and here &c).

Our Twitter was chosen as a "Best of 2016 (Behind the Scenes)" by Entertainment Weekly and our social media efforts have been profiled by The Washington Post, Literary Hub, and Ozy.

Neil Gaiman called us "the best twittering dictionary ever" and Katy Perry called our Twitter "The Bible."

Followed by celebrities, journalists, word nerds, and anyone who enjoys clever commentary, @MerriamWebster covers the sublime, silly, and serious. Words matter, people care, and @MerriamWebster brings language to life in a fun, engaging way that has made the brand an indispensable part of our culture. 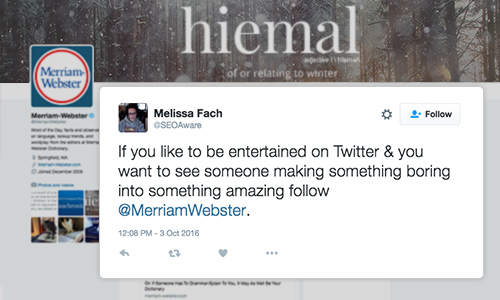