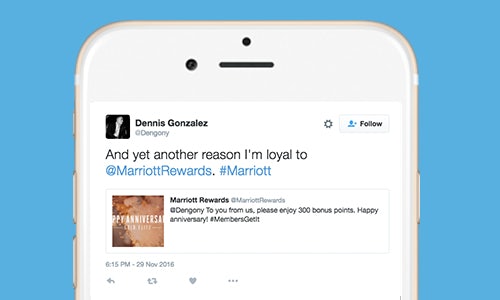 2. Recognize and reward members where they naturally spend their time, building loyalty with the program beyond the stay

#MRpoints is Marriott Rewards' loyalty engagement platform, powered by Chirpify, that uses Rewards points as social currency to incentivize engagement online. The platform was designed as a reciprocal ecosystem where members are empowered to engage with Marriott Rewards via social media and advocate on behalf of the program. The platform engages guests one-to-one with personalized content and instant rewards, enabling members to engage with the loyalty program even when they aren't on property.

By connecting their social media accounts with the platform, members can earn points, and so much more, by engaging with a variety of triggers throughout the year. The platform is integrated directly with Marriott Rewards' member database, allowing the program to recognize and reward members the moment they tweet.

This versatile platform allows Marriott Rewards to recognize social participation in several ways, seamlessly and in real-time including: amplification of branded content, collection of UGC, conversation conquesting, member communication, giveaways, and surprise and delight moments. A few 2016 use cases are outlined below.

When it came time to amplify the launch of Marriott Rewards' Reward-a-Friend enrollment program, connected members helped spread the word with a simple retweet! The campaign generated 7.4M impressions in four (4) days.

Every month, Marriott Rewards combines social data with CRM data to recognize members on their membership anniversary. A personalized tweet celebrates them, and an automatic point award is deposited into their account for use on future stays or experiences. The campaign has awarded 1.8M points since launching in May.

At SXSW, Marriott Rewards engaged with members in Austin at scale by conquesting relevant and timely mentions (i.e. #SXSW) on Twitter. In return, members were invited to exclusive concerts being held at the JW Marriott during the festival. More than 2,000 members attended the events.

Connected members have a combined network of more than 36.6M Twitter followers, and generated more than 66.6M impressions in 2016 on behalf of Marriott Rewards. 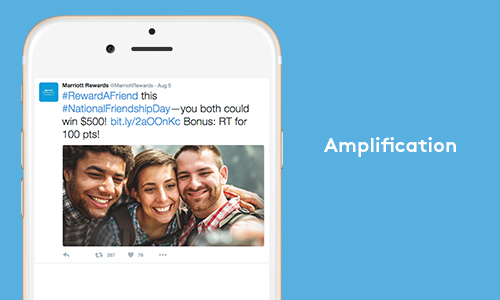 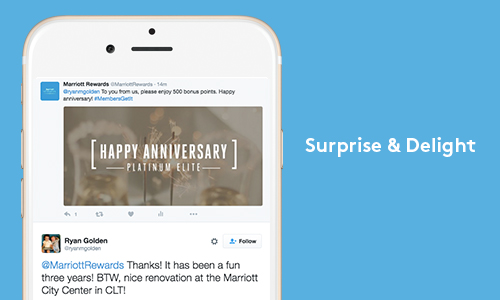 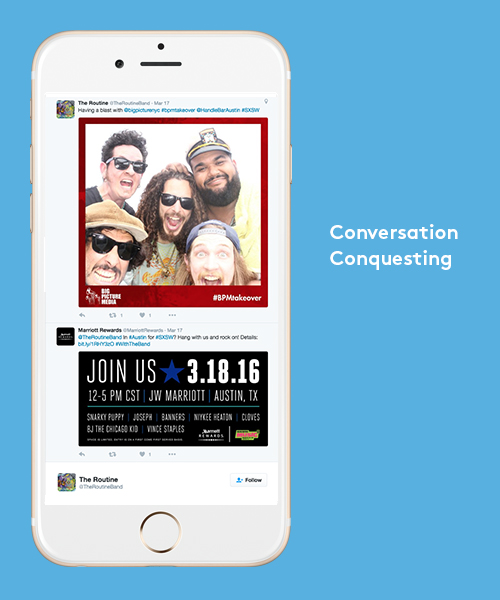 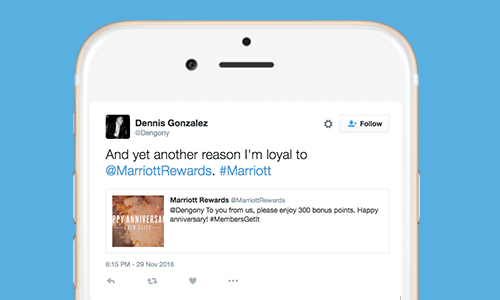