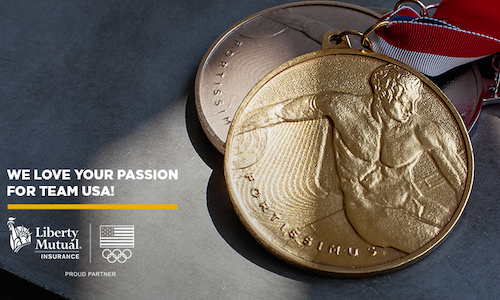 In celebration of Liberty Mutual's sponsorship of Team USA for the Olympic Games Rio 2016 and U.S. judo gold medalist, Kayla Harrison, the Community Management team launched a campaign to participate with fans during the biggest event of the summer. Liberty Mutual Insurance has the unique value proposition of insuring all medals won by Team USA at the Olympic Games Rio 2016, which gave the brand an interesting message to share. Text and Visual Responses and Surprise and Delight packages were used to interact with fans to promote the sponsorship and build brand relationships.

Using the insight that there would be an enthused social media fan base for Kayla's fans, as well as Team USA fanatics, Liberty Mutual developed a 360 degree activation to engage and delight fans. This Community Management strategy would expand upon the integrated marketing campaign across broadcast and digital, while also conversing with the social media audience less aware of the company's sponsorship.

The goals for this specific program were to:

The team increased the number of comments to interact with by implementing a Social Listening strategy. These refined searches sorted the high volume to find relevant Twitter conversations not mentioning the brand. This strategy created awareness and engagement with Team USA and Kayla Harrison fans unfamiliar with Liberty Mutual's sponsorship.

The Community Management team created a catalog of responses for engaging with consumers. These responses were approved by Kayla Harrison and the U.S. Olympic Committee and included celebratory tweets, questions about insuring the medals, and PR inquiries.

To instigate a personalized conversation, the team created a library of visual response templates. These templates included imagery and copy options to be used depending on the topic of the fan's tweet. Fans of Kayla Harrison received images to cheer her on before her medal round. Tweets supporting Team USA received an image of a shining medal with relevant copy. These personalized images led to multiple engagements with the brand and sharing of the content.

With approved outreach and background research on users, the team was able to quickly send out packages throughout the two week period and create positive sentiment about Liberty Mutual's sponsorship.

The Surprise & Delight program received great feedback from consumers, thrilled to receive swag for their engagement. Recipients of the Kayla Harrison box posted selfies of their autographed shirts, thanking Liberty Mutual and tagging Kayla to wish her good luck or celebrate her victory. Team USA fans shared similar excitement, taking lay-down shots of their gear or sharing a selfie in their t-shirt. The personalized note cards led to tweets thanking the Community Managers, such as "Huge shout out and thanks to Melissa and @LibertyMutual for hooking me up with some Team USA swag". Messages came in publicly and privately, grateful for their fan gear.

Visual Responses proved to be a strong asset for increasing our engagement, with a 128% total engagement rate. Of the 132 visual responses published during the two-week activation, 63% received engagement. Fans responded positively to the visual responses personalized to their fan base, resulting in 95% positive sentiment when they replied back to the images.

The team mailed out 53 Surprise & Delight packages in a two week period, with 66% of the recipients returning to social channels to share a photo or thank you upon receiving the package. Fans were overwhelmingly positive in their response, returning to social in a public or private setting to reach back out to Liberty Mutual to thank them for their fan gear. This Surprise & Delight program over-performed compared to an established benchmark of 41%. 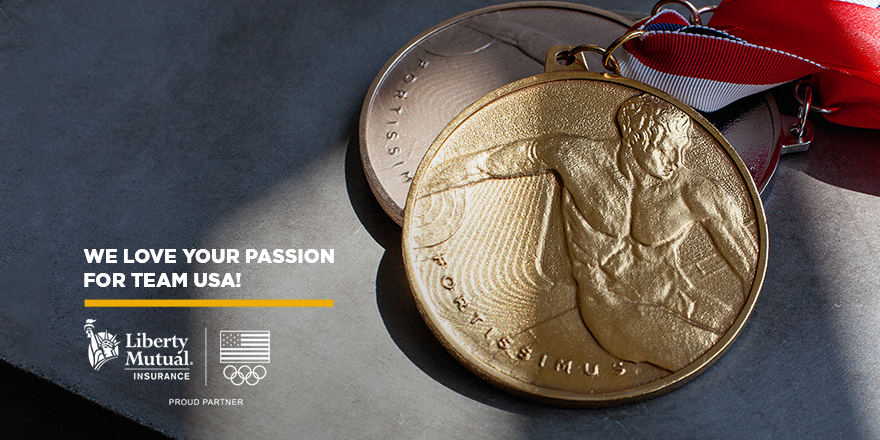 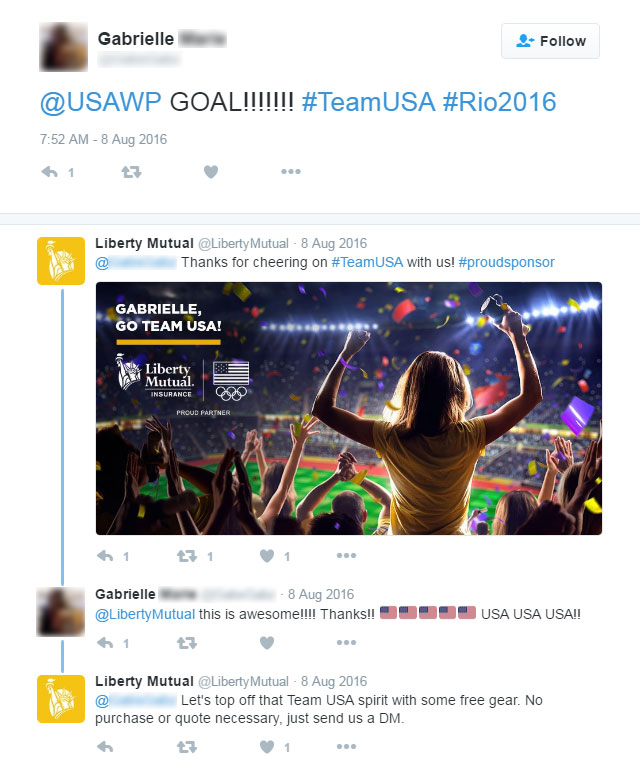 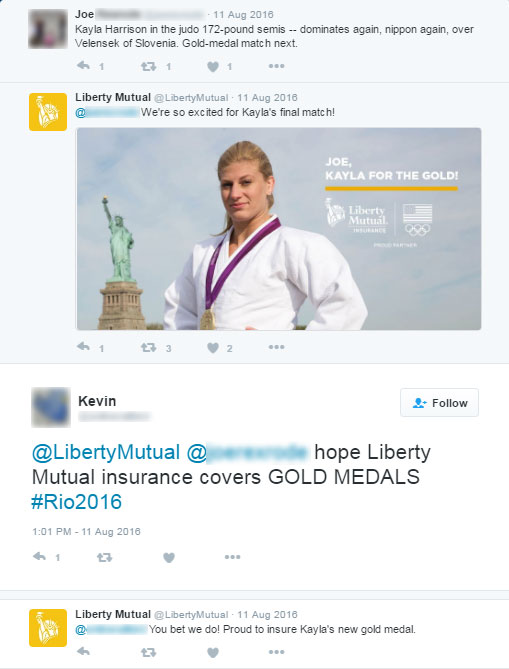 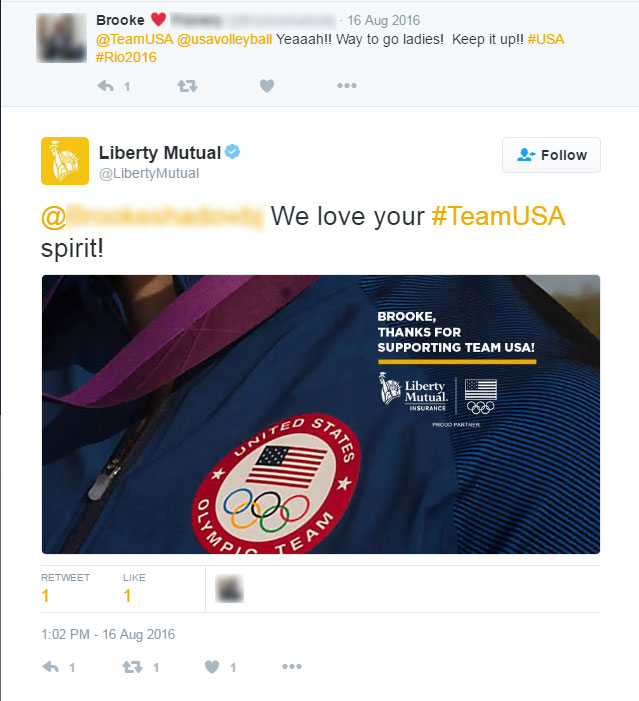 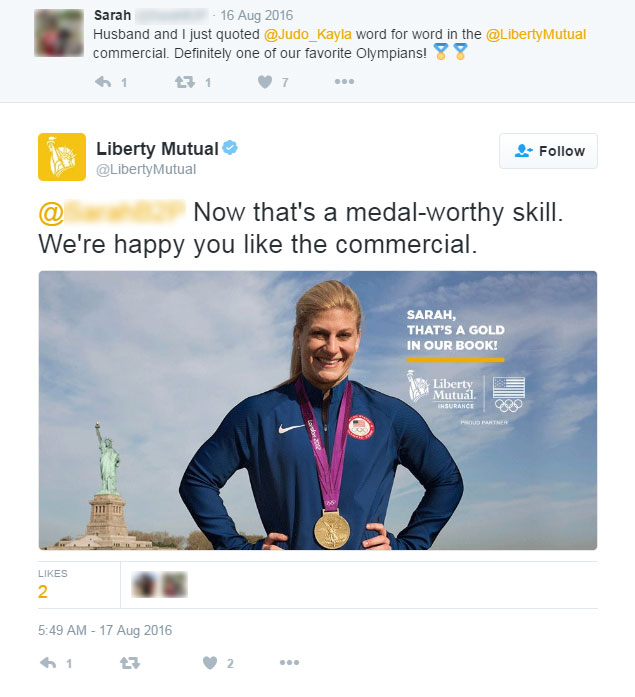 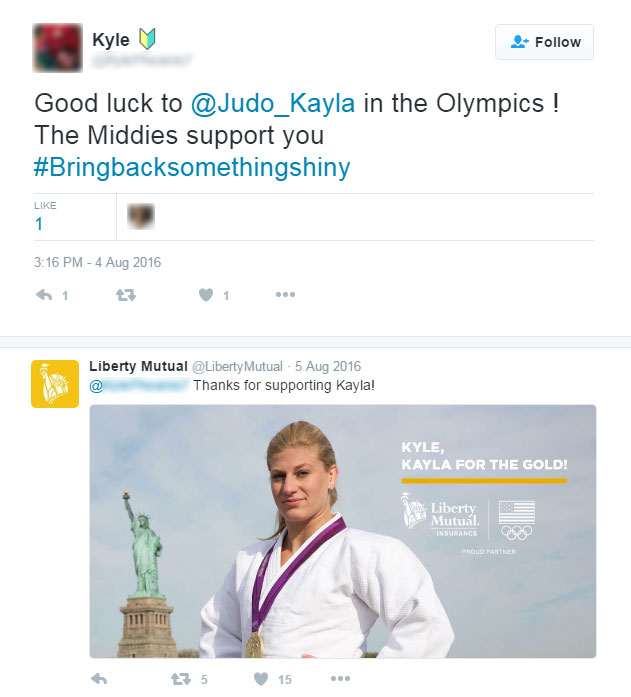 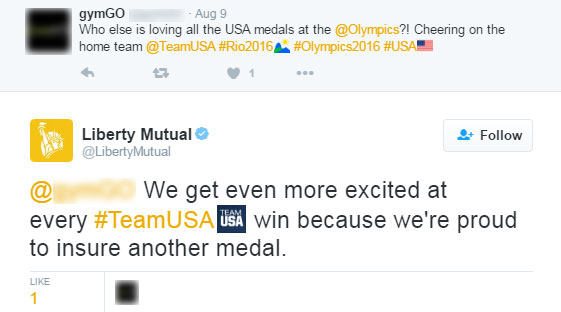 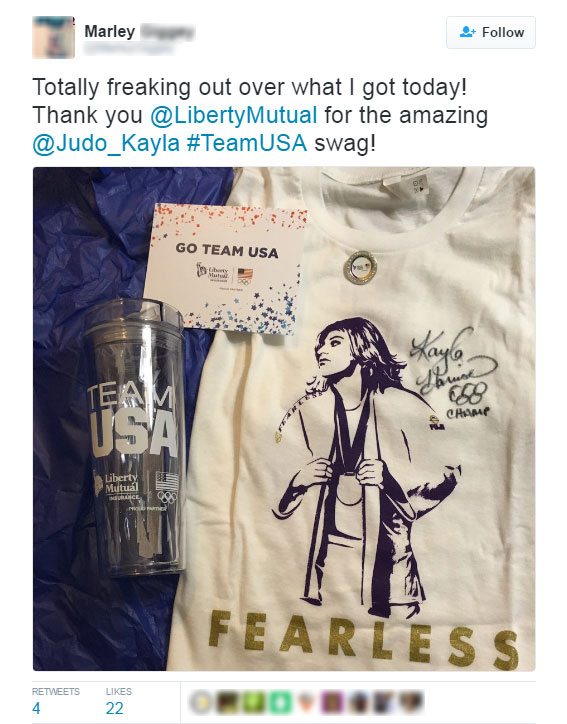 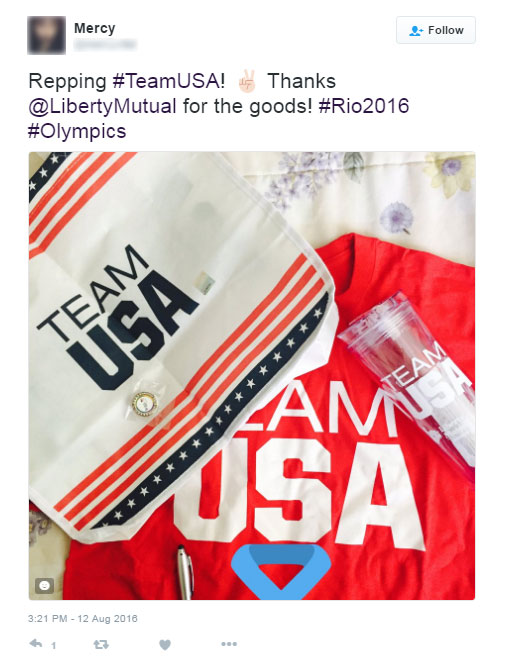 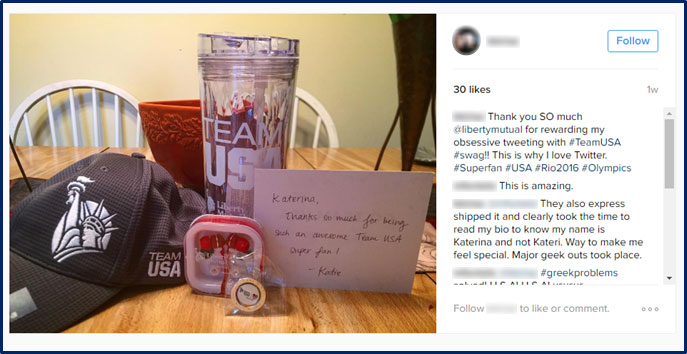