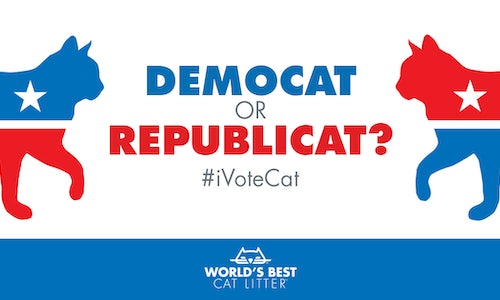 Less Pawlitics. More Cats. During one of the most grueling election seasons in recent history, World's Best Cat Litter™ sought to put the dirty "pawlitics" on pause with #iVoteCat, a feel-good campaign that asked people to show their support for cats, no matter who they were voting for on November 8th.

World's Best Cat Litter™, a natural cat litter made with the concentrated power of corn, is an underdog brand, and needed an out-of-the box way to raise brand awareness and engagement. With the elections in full swing in fall 2016, we decided to leverage the importance of this event in a way that actually made people feel good. And so, we came up with #iVoteCat, a fun, shareable message that appealed to all cat lovers, whether they were "Republicats," "Democats" or "Independecats." We also included a contest component to encourage visits of the iVoteCat.com dedicated landing page, offering the opportunity to win a year's supply of World's Best Cat Litter™.

By pledging to "vote cat," and sharing the #iVoteCat message on social media, consumers raised awareness of World's Best Cat Litter™ while showing off their love for cats. In turn, this reinforced the natural cat litter brand's own love for and celebration of cats.

The #iVoteCat campaign was timed to launch around National Cat Day, on October 29th, which also allowed the brand to play off the momentum and interest of the 2016 Presidential Election. Campaign messaging centered around the idea of supporting cats regardless of your political affiliation, with sample messaging such as "Republicat? Democat? Doesn't Matter. Show Your Support for Cats. #iVoteCat."

The brand kicked off the campaign with an election-style experiential event at Boston's South Station, raising interest and awareness with an #iVoteCat and World's Best Cat Litter™ branded campaign booth, rally signs and cat-costume-clad volunteers spreading the #iVoteCat message.

On this National Cat Day 2016, We the Cat People support…

-Giving our cats four extra hugs a day, and one free pass at scratching the couch.

-Keeping the litter box clean, no matter what happens in the ballot box.

-Sharing out support for cats by changing our Facebook profiles to #iVoteCat for a week.

-Supporting the cause the using #iVoteCat when the pawlitics get to be too much.

This landing page encouraged sharing of the pledge for an extra contest entry.

Of course, social media was a huge component of this campaign, with the brand regularly posting #iVoteCat images on Facebook, Twitter and Instagram during the duration of the effort. These posts encouraged brand fans and friends of fans to share their own #iVoteCat pledges and photos, helping the message spread rapidly across social media.

We all know that cats rule the internet, so it's no surprise that this past election season, people were eager for a break from the "dirty pawlitics" and a chance to show their support for cats.

As a competitor brand, World's Best Cat Litter™ does not have the big budget capabilities of some of the other products in this landscape. Thanks to the #iVoteCat campaign, however, we were able to raise brand awareness and engagement with one simple message that resonated with all cat lovers.

The iVoteCat.com website received nearly 20,000 visits, with about 13,000 people entering the contest during its short run. The #iVoteCat contest was shared from the page 3,100 times on Facebook and 700 times on Twitter. The hashtag sparked very engaged reactions on social media, with Facebook and Twitter fans sharing photos of their own cat and pledging to vote cat. #iVoteCat posts were shared on Facebook 1,000 times in the 12 days the campaign ran, reaching more than 413,064 people and garnering 4,800 reactions. On Twitter, #iVoteCat was retweeted 529 times, reaching more than 100,000 people. 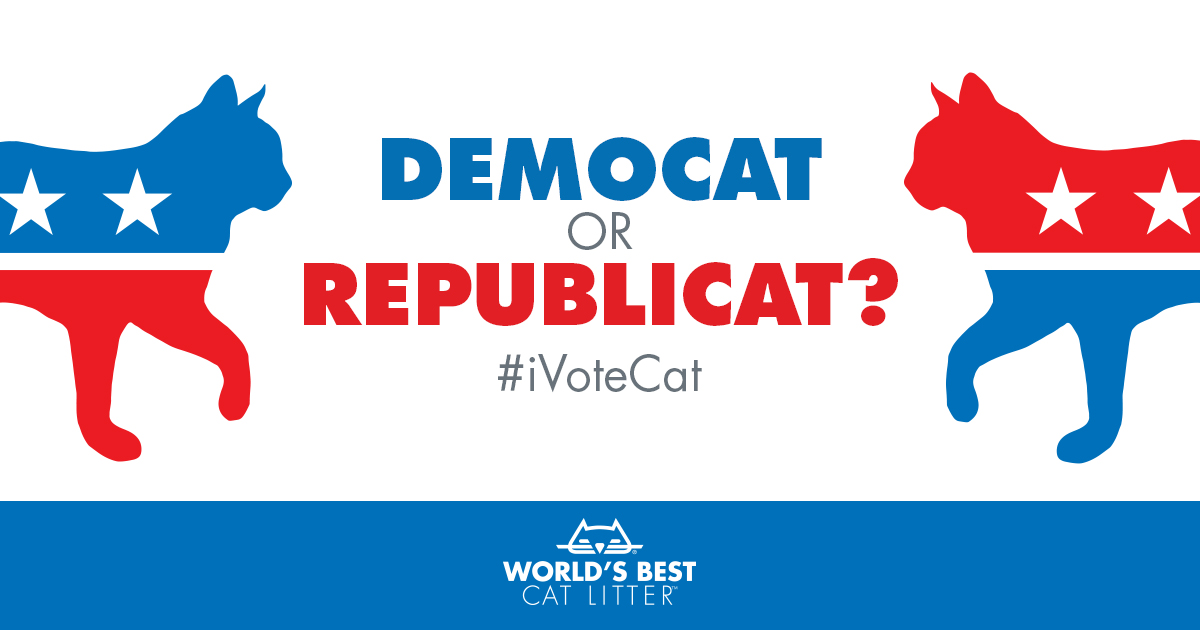