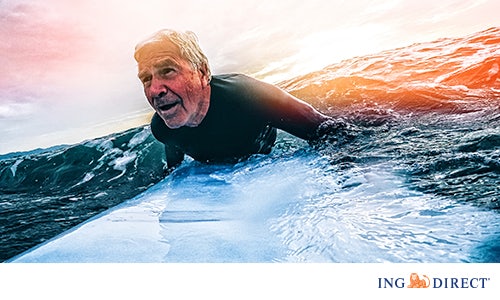 ING Direct Superannuation - This Is Living

As Australia's most recommended bank, ING Direct prides itself on doing banking differently, showing customers 'how banking can be' through straightforward and sometimes cheeky communication, and offering good value products.

Each month, Australians deposit a portion of their wage into their Superannuation fund, an account they can access in retirement at the age of 65. As a long term investment, the average Australian isn't highly engaged, spending just 8 hours per year engaged with their Super, and can be unresponsive to traditional messaging,

In 2016, ING Direct wanted to engage over 45, high net-worth individuals during a peak period in the year for considering Superannuation, aiming to increase new-to-business customers for their Superannuation product, Living Super, by 10%. We also aimed to:

Herd commissioned consumer research with a sample of more than 1,000 Australians to understand what the audience wanted to do in retirement. We found there is no limit to their adventurous side, uncovering many surprising insights including that in retirement:

- One in ten over 45s are considering bungee jumping or skydiving

- 22% are aiming to participate in an archaeological dig

These findings provided the launch pad for our campaign - 'This is Living' - which formed the focus of all content across paid, owned and earned channels.

To bring together the insight and the ING Direct product, Herd needed to take audiences through a journey from awareness to conversion. We developed an approach tailored to the custom journey, connecting multiple channels to drive broad awareness, while collecting data and audience profiles through each phase to accurately reach relevant audiences.

Ultimately, this allowed us to track direct business results at each point. Key elements to this included:

- Tying emotional drivers to a clear and direct call to action, with one overarching key message: Retirement is an adventure; one that you should plan for now.

- Building an approach that reaches key audiences with a singular message through multiple channels, valuing quality over quantity

Herd identified Ian Johnson as a case study, an Australian who had trekked Machu Picchu following his retirement using his Super. Ian was featured in ING Direct's launch video on Facebook as well as throughout an integrated native and earned media campaign. Bringing these two elements together allowed ING Direct to join in on a retirement conversation that Australian's actually want to have.

We launched the campaign with a hero video on ING Direct's Facebook channel featuring Ian Johnson's retirement story, which generated more than 130,000 views and collected audience data for later retargeting. This coincided with the launch of the research and Ian's story on News.com.au (Australia's largest news outlet), while we simultaneously activated a native partnership with Fairfax Traveller on their website and social channels (part of the network of Australia's second largest news provider) that talked to aspirational travel for retirees.

After the initial awareness phase, Herd developed a five-part blog series that was placed across all ING Direct social channels and eDMs, including a comprehensive infographic on the research. These were placed in order to warm the audience to the campaign theme, drive interest in Super and
collect further profiles for retargeting.

Herd then developed a paid social advertising plan that utilised adventure travel creatives such as surfing, skiing and trekking to serve targeted click-to-website and lead generation advertisements to a custom audience made up of those who viewed or read content in the first phases of the campaign. Audiences were then prompted to sign up for ING Direct's Superannuation Product.

- Herd executed an integrated campaign, led by digital and social, to increase the year-to-date average of new-to-bank Superannuation customers by 25% through lead-generation and retargeting

- Video content garnered more than 130,000 views within a targeted over 45 audience

Video for ING Direct Superannuation - This Is Living 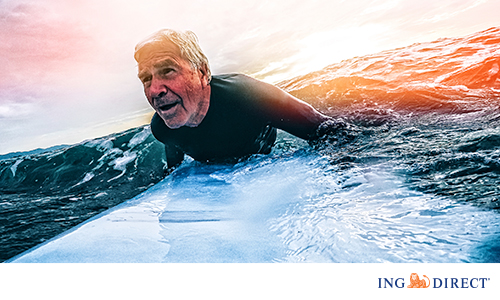