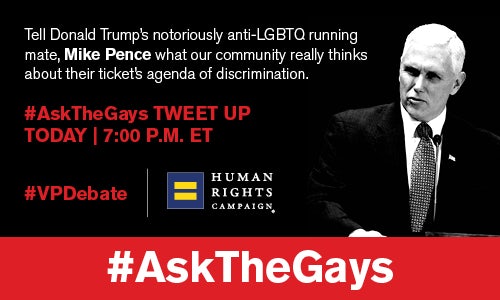 Donald Trump Encouraged Voters to #AskTheGays. So We Answered.

Just days after the horrific shooting at Pulse nightclub in Orlando, Donald Trump had the audacity to pander to LGBTQ voters. While on the campaign trail in North Carolina, Trump challenged his skeptics to "ask the gays" about where he stood on LGBTQ equality.

Trump argued that he would protect LGBTQ people and be a president for all Americans, but he campaigned on rolling back equality for millions of LGBTQ people and our families at every turn. Trump also selected notoriously anti-equality Mike Pence as his running mate.

Since Trump wanted voters to "ask the gays" – we, the nation's largest LGBTQ civil rights organization, were more than happy to answer. Due to Pence's longtime campaign of hate against the LGBTQ community, we knew that the VP debate was the perfect time to respond to Trump's prompt.

HRC used #AskTheGays as a rallying cry to highlight Pence's atrocious records when it comes to LGBTQ equality. While Hillary Clinton and Tim Kaine ran on the most robust pro-equality agenda in American history, Pence's record on LGBTQ equality is abysmal.

HRC aimed to use #AskTheGays to elevate the conversation around where the candidates, as well as their running mates, stood on the issues. In addition to spreading facts, it was an opportunity for our community to say what they really thought about an agenda of discrimination.

HRC decided to use #AskTheGays exclusively around the vice-presidential debate, trolling Trump's request with answers he would not want to hear. It was an opportunity for LGBTQ and allied Americans to give Trump, along with Pence, a piece of their mind.

With so many accounts vigorously tweeting on debate nights, HRC knew that we had to elevate ourselves above the rest on Twitter with an actionable and creative approach.

HRC planned a tweet-up that occurred an hour ahead of the debate highlighting Pence's positions and statements. We promoted the tweet-up extensively the night before and day of, including paying for ads on Twitter with an image share. Once the tweet up began, HRC tweeted every 3-5 minutes, going over Pence's extensive track record on hindering equality. We then asked online influencers and members of our online community to help us spread the word about the tweet-up before hand.

Once the debate started, we jumped into rapid response mode. HRC was quick to elevate facts and expand on comments made during the debate. Our tweets contained standalone text as well as text paired with image shares. HRC produced factual videos and real-time videos from the debate that used the hashtag #AskTheGays.

While the hashtag revolved around the tweet-up, it was an integrated campaign that went beyond Twitter, spanning onto our Facebook and Instagram accounts. HRC's consumer marketing department even created a successful #AskTheGays tshirt.

We answered Trump's #AskTheGays question boldly and unapologetically. We were ready on the go to be a part of a national conversation around Pence. Throughout the election cycle, HRC sent out almost 100 tweets directly targeting Pence.

Some of the tweets included:

It was clear by the end of the evening that LGBTQ and allied Americans had a lot to say around the issues and would continue to be passionate and persistent in the fight for equality.

Tweets gained hundreds of interactions within minutes. HRC was overwhelmed by the number of HRC members and supporters who joined us on Twitter, expressing their outrage at Pence's nomination.

#AskTheGays trended nationally on Twitter throughout the evening, making it clear that equality was a top line issue for voters. 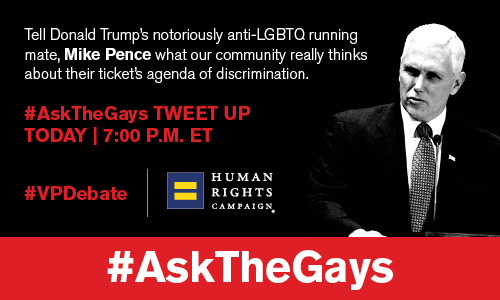